SS. Nereo e Achilleo
(Vasi at work in the Grand View of Rome)

Links to this page can be found in Book 3, Map B4, Day 5, View C10, Rione Ripa and Rione Campitelli. 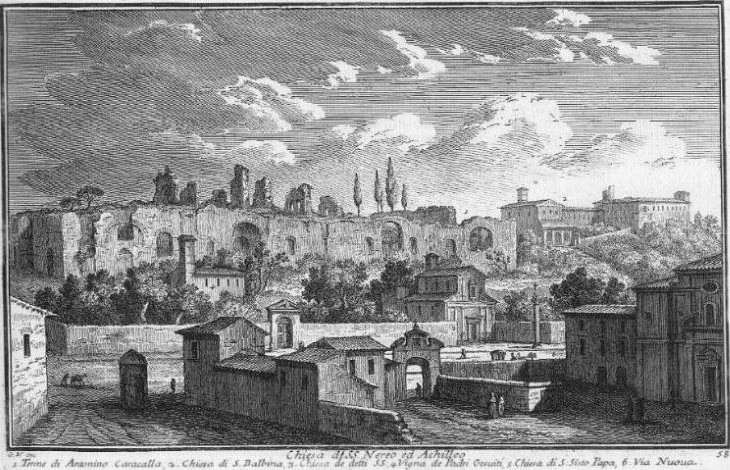 Sulle Magnificenze (Wonders) di Roma Antica e Moderna was the overall title Giuseppe Vasi gave to the ten books of etchings he published in 1747-761, but he did not develop a plan for having books specifically covering the monuments of Ancient Rome. These were often shown in plates which were named after a church or a religious institution. In this 1753 etching Vasi used the small church of SS. Nereo and Achilleo to depict the front wall of Terme di Caracalla, the imposing baths built by Emperor Caracalla on the slope of the eastern peak of the Aventine Hill.
The view is taken from the green dot in the small 1748 map here below. In the description below the plate Vasi made reference to: 1) Terme di Caracalla; 2) S. Balbina; 3) SS. Nereo e Achilleo; 4) Vigna de' Padri Gesuiti (a cultivated piece of land belonging to Collegio Romano); 5) S. Sisto Vecchio; 6) Via Nuova (the urban section of ancient Via Appia). The dotted line in the small map delineates the border between Rione Ripa (left) and Rione Campitelli (right). 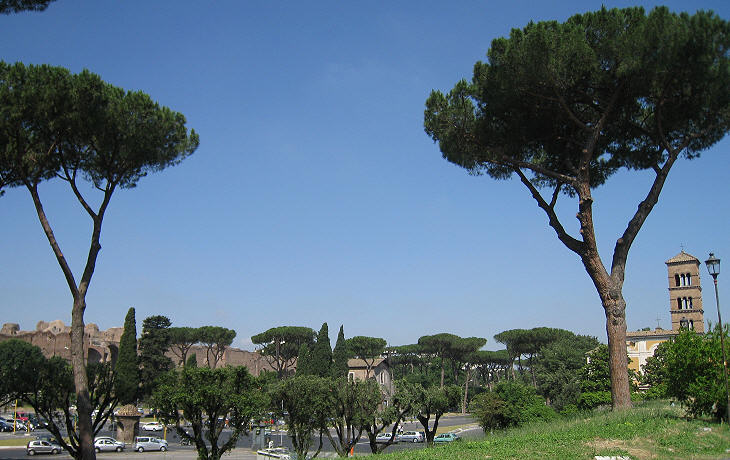 The area is now planted with stone pines and cypresses which limit the view over Terme di Caracalla and the Aventine. Via Nuova was significantly enlarged in 1914 and in 1938 (it is now known as Via delle Terme di Caracalla); when this occurred the minor buildings near S. Sisto Vecchio were pulled down (they are visible in the foreground of the plate) in order to spare SS. Nereo ed Achilleo.
Today the gardens to the side of the new road are a favourite spot for Roman joggers. 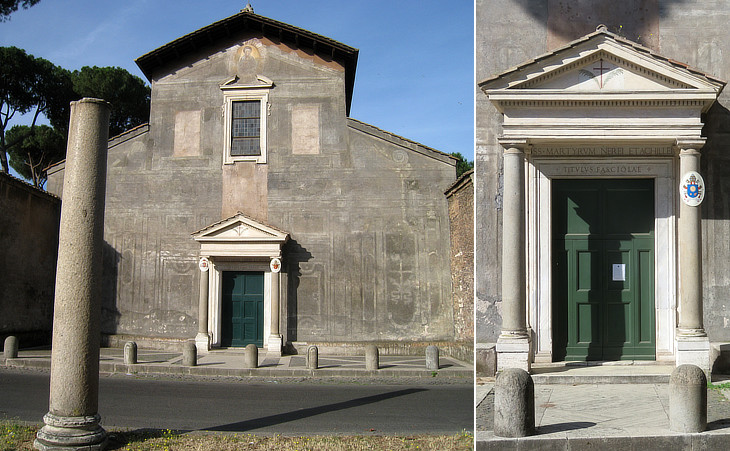 Domine Quo Vadis is a church along Via Appia which is associated with an episode of the life of St. Peter; the same applies to SS. Nereo ed Achilleo: the church was built in memory of the bandages St. Peter lost at this spot; they protected the wounds caused by the chains which tightly bound him in prison. For this reason the church was recorded as Titulus Fasciole (bandages) in a IVth century inscription. The inscription was repeated on the XVth century lintel above the entrance.
At the end of the VIth century the church was dedicated to Sts. Nereus and Achilleus, two Roman Christian soldiers who were put to death at the time of Emperor Domitian. On that occasion their relics were moved to this church.
The column which stands opposite the church had an ancient capital and above it a bronze cross both of which have been stolen. It was similar to a column opposite nearby S. Cesareo.

(left) Rear side of the church; (centre) altar, a Cosmati work which came from another church; (right) medieval aedicule

In the IXth century the church was protected by walls and by two towers one of which can still be seen near the apse of the church. Today this tower is not as tall as it was when originally built.
The plate by Vasi shows in its lower left corner a small circular building: this medieval aedicule was most likely built at the site of a previous Roman signpost which stood where a street leading to Porta Latina branched off from Via Nuova. 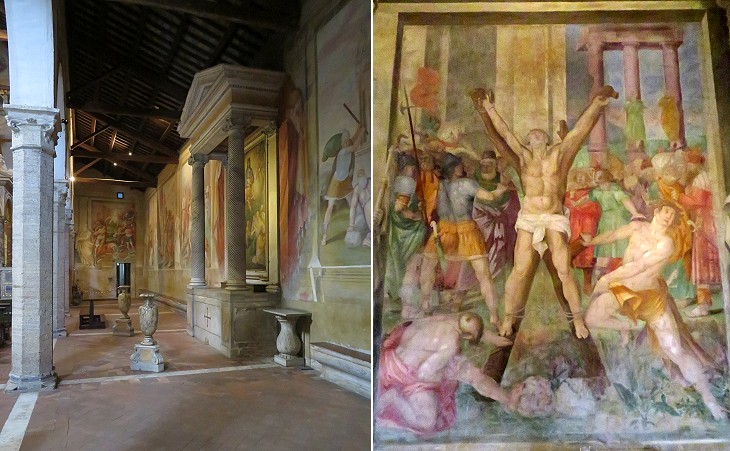 The current aspect of the interior is mainly due to a 1597 renovation which was promoted by Cardinal Cesare Baronio (who restored also S. Cesareo). Its walls were decorated with large frescoes depicting dramatic scenes of martyrdoms in line with the guidelines issued by the Catholic Church in the preceding years which recommended emphasizing the importance of the ancient martyrs and of their heroic sacrifices. 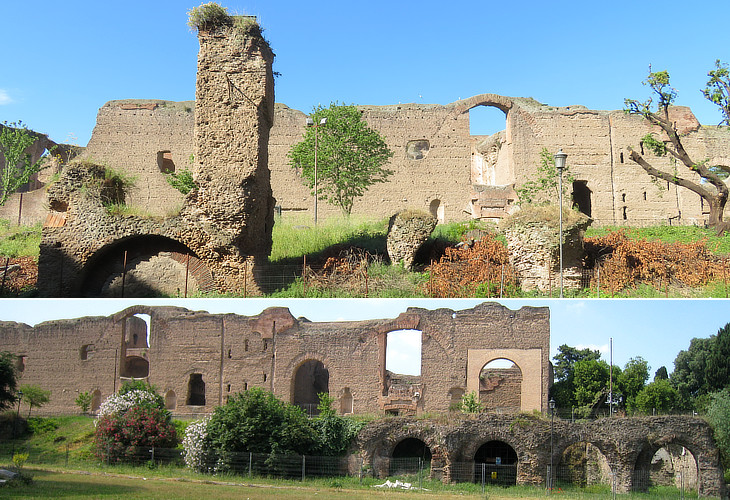 Shops along Via Nova

The baths were built between 212 and 217 AD by Emperor Caracalla, most likely to regain the favour of the Romans after he had arranged the murder of his brother Geta. They were the largest baths of Rome until the construction of those dedicated to Emperor Diocletian.
They were a social meeting point, where people went not just to bathe and exercise; on the ground level along Via Nova, a new street parallel to Via Appia, there were shops and taverns and facilities of another kind. According to a Roman saying: Balnea vina Venus corrumpunt corpora nostra, sed vitam faciunt balnea vina Venus (baths, wine and sex rot our bodies, but baths, wine and sex are the essence of our lives).

Front of the baths

The front wall has a length of more than 200 m/218 yd. The fact that most of it still stands, shows the sound construction techniques developed by Roman engineers. The foundation of the wall does not reach a natural layer of solid rock, but stands on an artificial terrace which replaced uneven marshy ground. To create a terrace wide enough to contain the main building, the gardens and large ancillary facilities, the engineers had to cut the slope of the hill and to build a high retaining wall to prevent landslides. 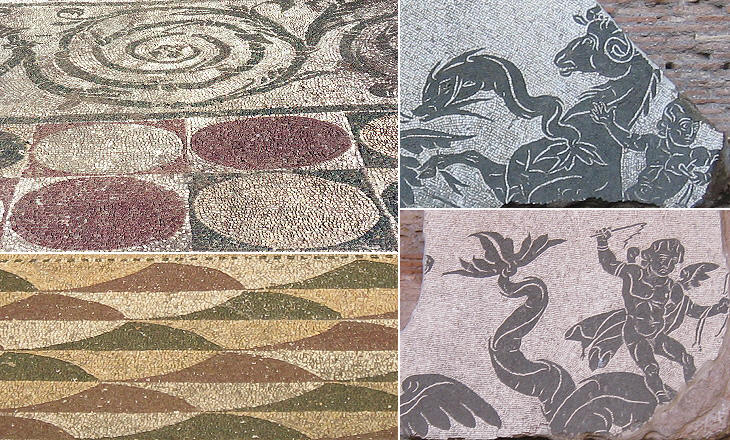 The baths were used for more than three centuries until the aqueducts which supplied them with water were cut during the Greek-Gothic War. 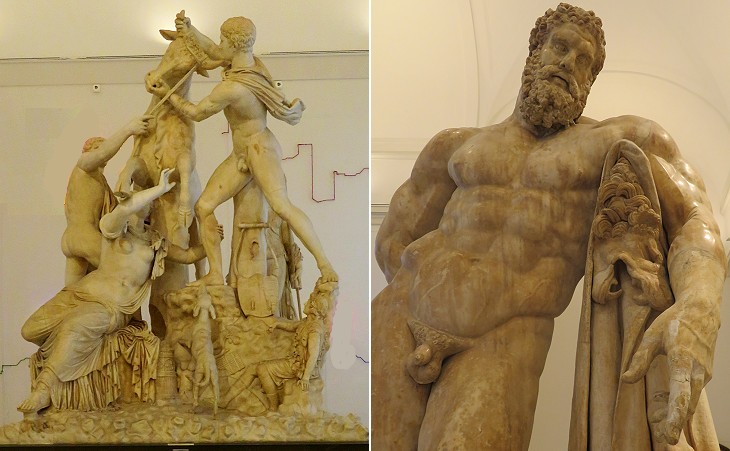 The baths were lavishly decorated and for centuries their columns and marbles were used to embellish the churches and palaces of Rome; at the time of Pope Paul III some gigantic statues were found which became part of the private collection of the Farnese, the family of the Pope.

The "calidarium" when it was used for staging operas (left) and in July 2007 for a Swan Lake performance (right); you may wish to see the theatre-like arrangement of Arena di Verona

Between 1937 and the end of the 1980s, a Summer Opera Season was staged between the two remaining pillars which supported the calidarium, the main hot hall of the baths. Aida by Giuseppe Verdi especially profited from this setting. Since 2003 the Summer Opera Season is again staged at Terme di Caracalla, but at some distance from the pillars. 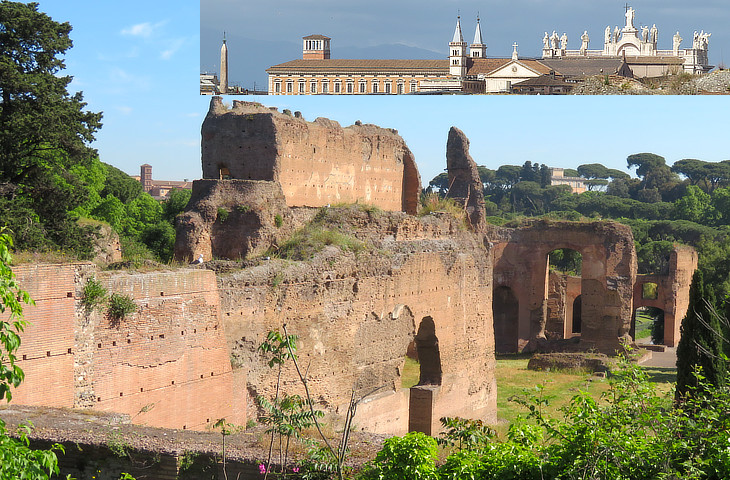 You are invited to spend An Evening at Caracalla or to read Seneca at the Baths (with many more images) or William Dean Howells' account of his visit to Terme di Caracalla in 1908.The image used as background for this page shows the text of Celeste Aida, a famous aria from the opera by Verdi. 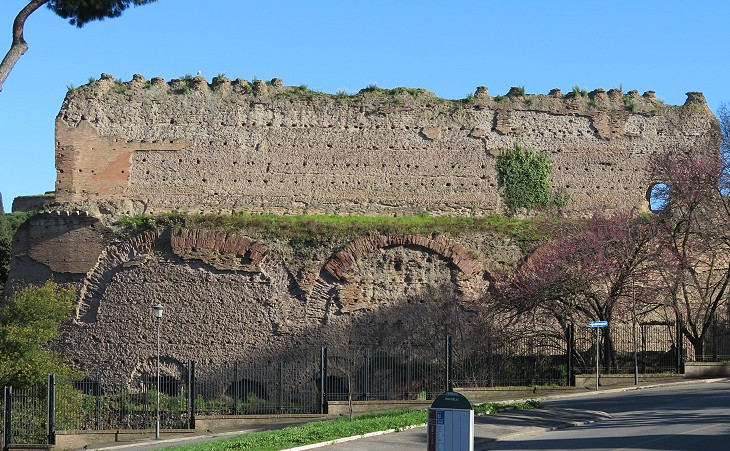 External wall of a large ancillary building, most likely a library on the western side of the complex 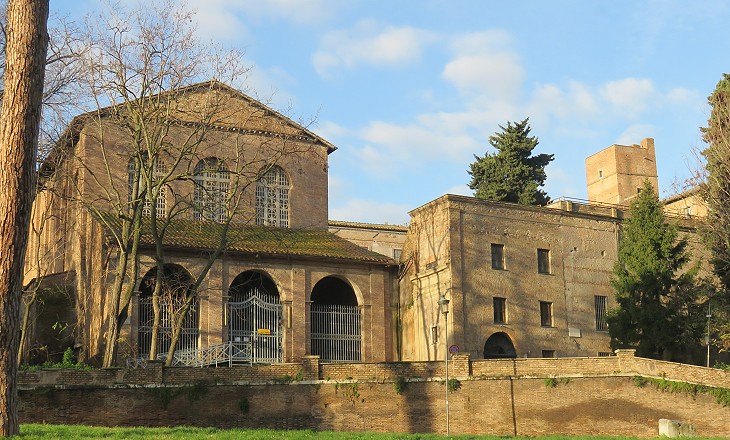 During the Middle Ages the Aventine housed three monasteries which had the appearance of fortresses: S. Sabina, S. Saba and S. Balbina. The church stands on a building which was included in a large villa owned by Lucius Fabius Cilo, a Roman senator who was a supporter of Emperor Septimius Severus. It was first recorded as dedicated to St. Balbina, a IInd century martyr, in 595.
In 1927-930 S. Balbina was returned to its supposed medieval aspect (you may wish to see the church in a 1588 Guide to Rome). 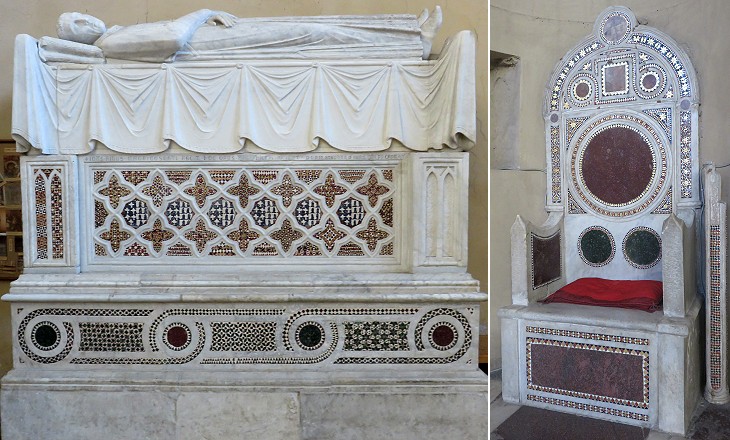 (left) Monument to Stefano de' Surdis, Chaplain of the Pope (d. 1303) (see other details in the Hall of Fame page of this website); (right) episcopal chair

The too many changes undergone by the church during its long history have deprived the building of historical and artistic consistency. It contains however a number of works of art of different periods which are well worth being seen, in particular two which are attributed to the Cosmati, although the episcopal chair was perhaps overly restored. 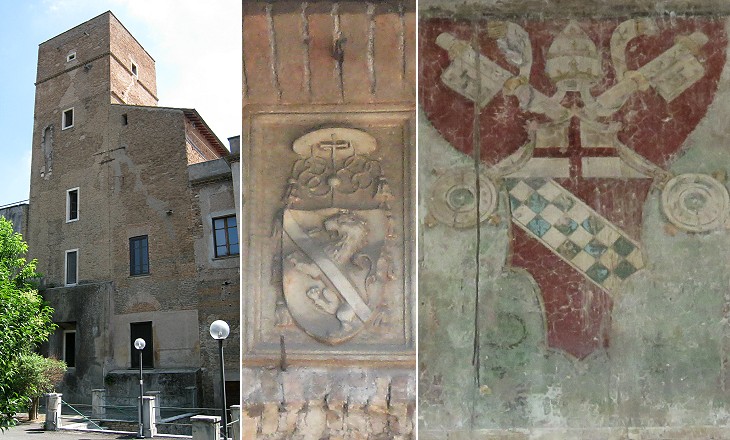 We know that the apse of S. Balbina was decorated with ancient mosaics, but during the XIIth century it collapsed. The church remained in a very precarious condition until 1489 when Cardinal Barbo promoted its restoration, but not that of the adjoining monastery. 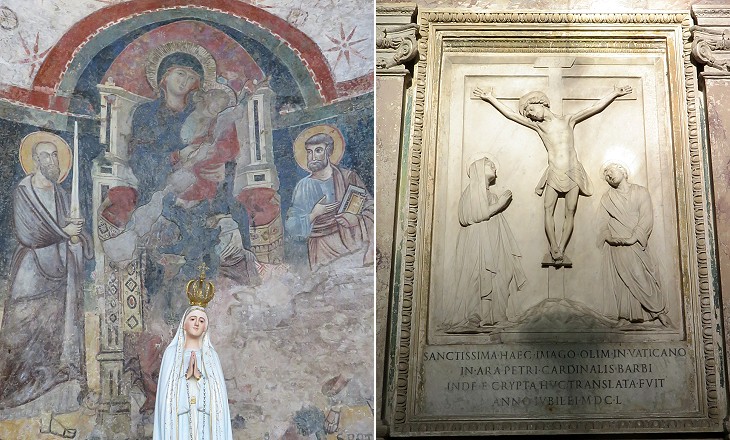 (left) Late XIIIth century fresco; (right) relief from the tomb of Pope Paul II in S. Pietro Vecchio by Giovanni Dalmata and Mino da Fiesole. It was relocated to S. Balbina in 1650

The interior is a large rectangular hall without chapels. The wall however was thick enough to house six niches on each side. A couple of them retain parts of their medieval fresco decoration, while another one has a fine relief from the tomb of Pope Paul II. When the monument was dismantled some decorative elements were so similar to ancient reliefs that they were acquired by the Borghese and eventually sold to Napoleon (one of them is on display at the Louvre - it opens in another window). 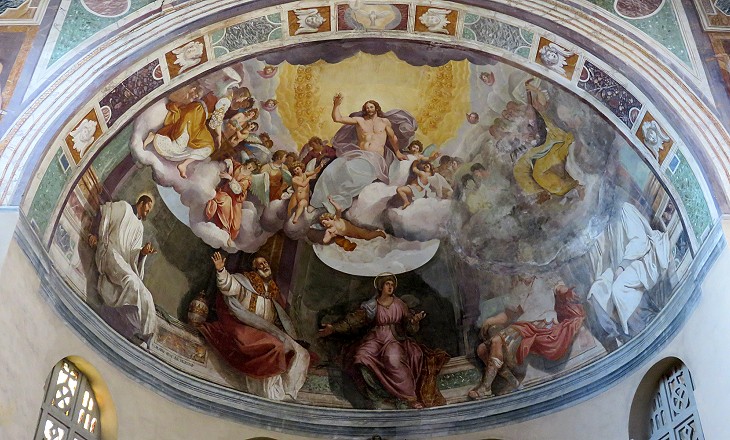 Fresco in the apse by Anastasio Fontebuoni

Pope Clement VIII promoted a major effort aimed at the restoration and embellishment of the churches of Rome for the Jubilee Year 1600. In 1599 Pompeo Arrigoni, titular cardinal of S. Balbina, commissioned Anastasio Fontebuoni, a young painter from Florence, to decorate the apse of the church. Fontebuoni was involved also in the decoration of that of S. Prisca. It was a period during which painters had to strictly follow the advice given to them by priests, yet the way Jesus Christ was portrayed is rather puzzling, because the upper part of the body is naked and muscular. In 1599 the muscular nudities painted by Michelangelo in the Last Judgement (it opens in another window) in 1536-541 were regarded as being (almost) heretical and Fontebuoni took some risks. 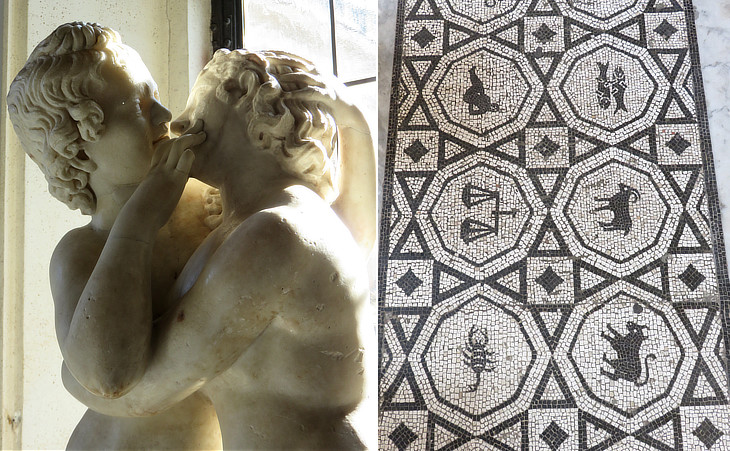 Fragments of a mosaic found near Porta Ardeatina in 1938

The enlargement of the street leading to Terme di Caracalla was part of a larger project aimed at linking Rome with EUR, a new quarter which was expected to house Esposizione Universale di Roma, the 1942 World Exhibition. When the new road was about to cross the walls near Porta Ardeatina, an ancient necropolis was found. A black and white mosaic which was found there was relocated to S. Balbina which had a very plain floor. 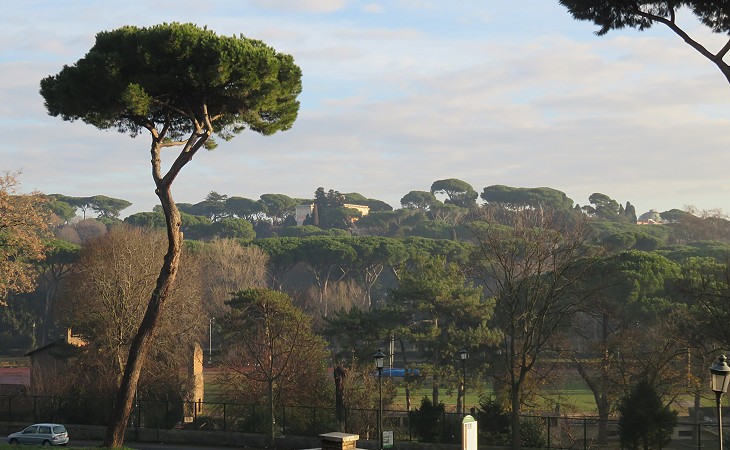 View of Villa Mattei on the Caelian Hill from S. Balbina

The other part of the peak of the Aventine where S. Balbina is situated houses an interesting early XXth century development (known as S. Saba) where you may wish to have a stroll. The street behind the church is covered in a page about the Silent Streets of Rome. 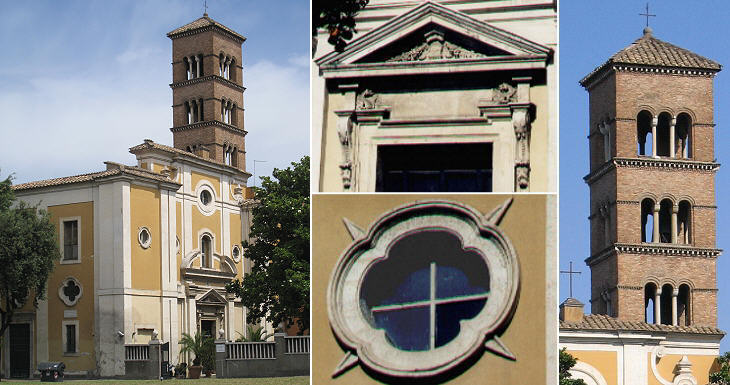 (left) Façade; (centre) details of the portal (above) and of a window (below); (right) XIIIth century bell tower

The church is first recorded in the late IVth century; because the area was often flooded it was rebuilt several times and each time the floor was raised. The church was called Vecchio (old) in the late XVIth century when the Dominican nuns who lived in the adjoining building were relocated to SS. Domenico e Sisto, because of the unhealthiness of the site.
The church and the nunnery were used again in the XVIIIth century. The new façade is a 1725 work by Filippo Raguzzini, who maintained the original entrance by Giacomo Della Porta which shows the dragons of Pope Gregory XIII (you may wish to see the building as it appeared in a 1588 Guide to Rome). 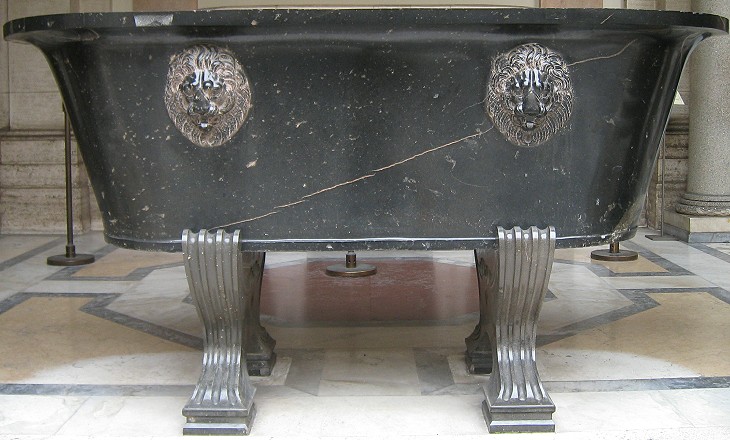 Two large basins from Terme di Caracalla were turned into fountains to embellish Piazza Farnese. This small basin, almost the size of a modern bathtub, was placed in Cortile Ottagono, the courtyard which was designed in the XVIIIth century to house the most precious exhibits of the Papal Collections. 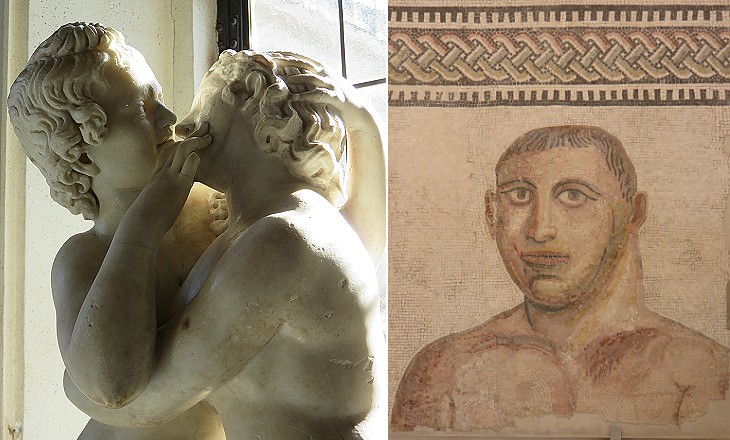 The statue was found in 1749. Pope Benedict XIV felt its subject would not be appropriate for a papal museum or palace and he donated it to Musei Capitolini. Similar to other ancient works of art it was seized by Napoleon, but Pope Pius VII managed to persuade King Louis XVIII to return it in 1816. 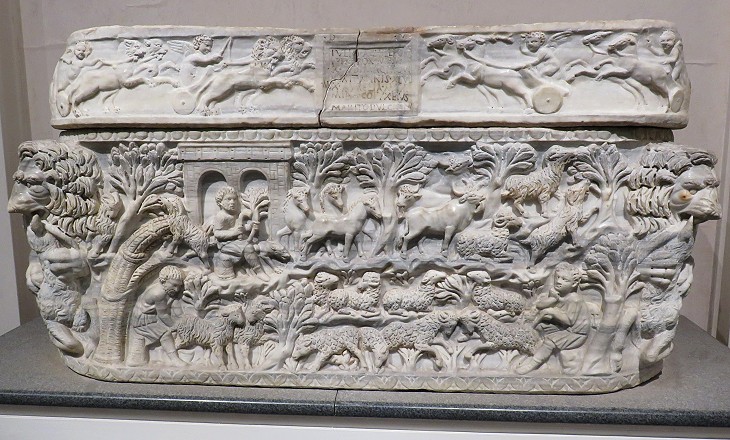 The relief of this sarcophagus depicts a complex scene where three shepherds take care of their animals, mainly sheep. The choice of a pastoral idyllic subject, rather than a Dionysiac scene (it opens in another window), marks a change in the tastes of Roman society which eventually led to the depiction of the Good Shepherd as an early Christian symbol.