- Mdina (Città Vecchia) - page one
(detail of a statue of St. Catherine of the Wheel in the parish church of Zejtun)

The ancient city of Malta, called Notabile or Vecchia, and the see of the bishop, is built on an eminence, a few miles distant from Valletta. It was probably the metropolis, mentioned by Cicero: "Insula est Melita (..) in qua est eodem nomine oppidum."
Richard Colt Hoare - A classical tour through Italy in 1790 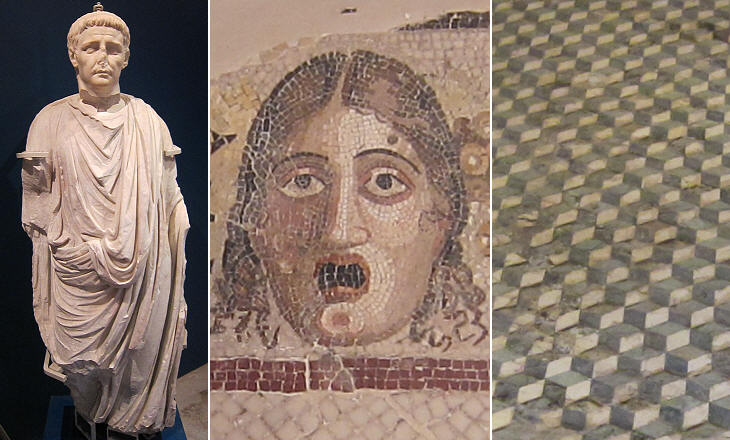 The Roman municipium (main town) of Malta was located in the south-western part of the island on a hill at some distance from the sea and which had a commanding view. This position allowed the inhabitants of the town to avoid being caught by surprise by raids of pirates. Archaeologists have been able to identify the extent of the Roman town which was larger than today's Mdina because it included nearby Rabat. In 1881 the remains of a Roman villa were identified near the Greeks' Gate of the town and in 1920-1924 the area was carefully excavated and some elaborate mosaics were found. 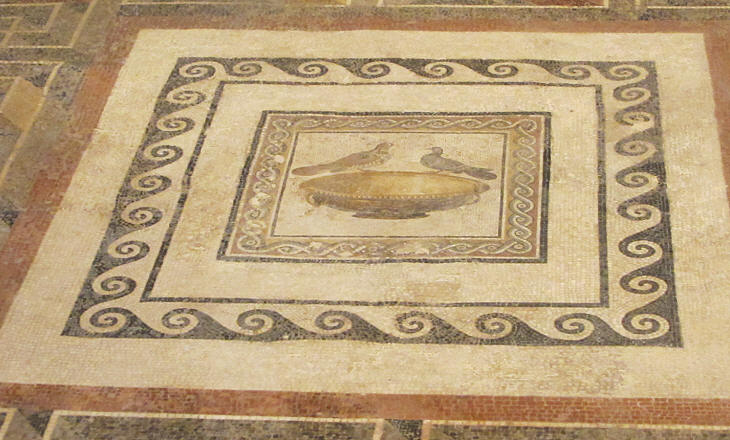 The villa is dated late Ist century AD and it shows that its inhabitants were wealthy enough to pay for mosaic makers from Sicily or Tunisia to travel to Malta and to decorate the building with subjects typical of the Hellenistic tradition. Drinking doves were depicted in many Roman mosaics, e.g. at Villa Adriana, also in conjunction with the Three Graces, e.g. at Narlikuyu in Turkey, but they eventually became a Christian symbol, e.g. at S. Costanza in Rome. The motif of the frame is known as Vitruvian scroll, because it was described in De Architectura, a famous treaty on architecture written by Vitruvius. Examples of this motif can be seen in many mosaics at Antioch. 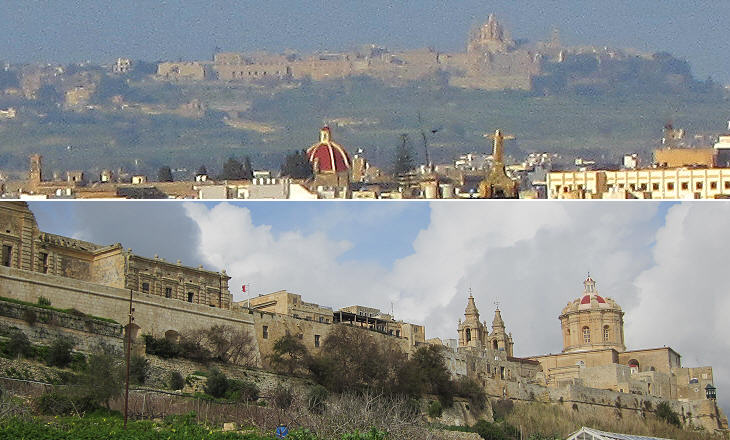 (above) Mdina seen from Floriana; (below) walls of Mdina and St. Paul's Cathedral

This day we made an expedition thro the island in coaches drawn by one mule each. (..) We went first to the ancient city of Melita, which is near the center of the island, and commands a view of the whole. (..) The city is strongly fortified, and is governed by an officer called the Hahem. He received us very politely and shewed us the old palace, which is not indeed much worth the seeing.
Patrick Brydone - A Tour to Sicily and Malta in 1770
In the Vth century Malta was conquered by the Vandals and in the following one by the Byzantines. Its population greatly declined and when the Arabs from Tunisia landed on it they found almost no evidence of a structured society, although the island housed a small Byzantine fleet. The Roman town was too large to be effectively protected and the Arabs chose to dig a ditch and build walls around its eastern section which stood on higher ground. They called it Medina which means walled town in Arabic. 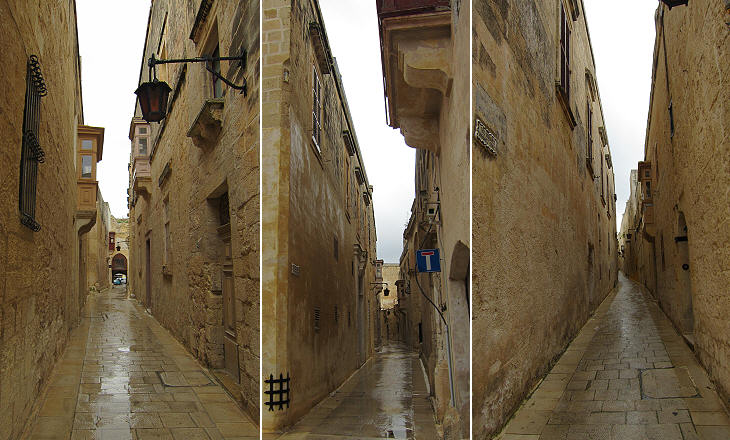 Streets of Mdina near Greeks' Gate

Mdina has undergone many changes through the centuries, also because of an earthquake in 1693. The Norman/Aragonese buildings near Greeks' Gate were less affected by the reconstruction effort which followed the earthquake and they retain a somewhat Arab appearance with high walls and few windows ensuring the privacy of the houses. You may wish to visit some medinas in Tunisia. 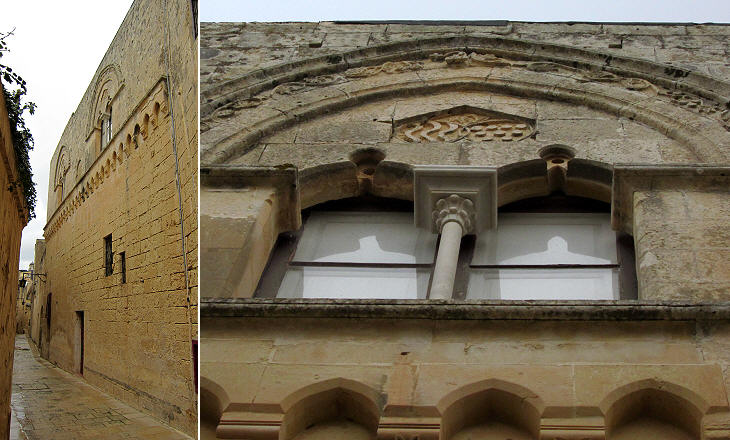 In the city I observed several broken columns, and some other houses, in the old Norman style of architecture. Colt Hoare
At the end of the XIth century the Normans landed on Malta and the local Arab governor acknowledged the suzerainty of Roger, King of Sicily. Mdina, which was eventually renamed Città Notabile, remained the capital of the island, although the Normans and after them the Aragonese developed Borgo, a small settlement near the great natural harbour on the eastern coast of the island. Malta became a county of Sicily and some of the local wealthiest families were given noble titles. They built large houses in a style which is typical of Sicily and which combines Gothic and Islamic art features, e.g. Palazzo Mergulese at Syracuse. 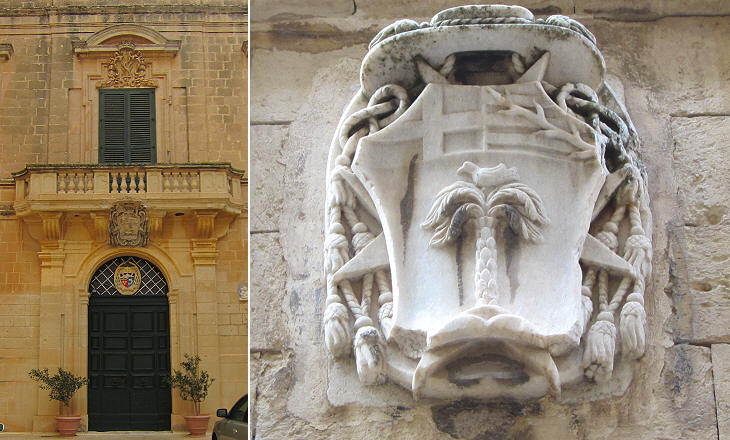 (left) Bishops' Palace; (right) coat of arms of Bishop Davide Cocco Palmieri combined with that of Grand Master Carafa in the main street of Mdina

In 1530 Emperor Charles V assigned the County of Malta to the Knights Hospitallers (or of St. John or of Rhodes). Once in Malta the Knights set their residence at Borgo and they eventually moved to Valletta, a new town founded by Grand Master Valette in 1566.
Mdina however remained the religious capital of the island and the Bishops of Malta continued to reside there. Although in Malta it is not unusual to see the coat of arms of a bishop combined with that of the reigning Grand Master, conflicts between religious and civilian authorities were rather frequent and in some cases the popes themselves had to intervene to solve them. 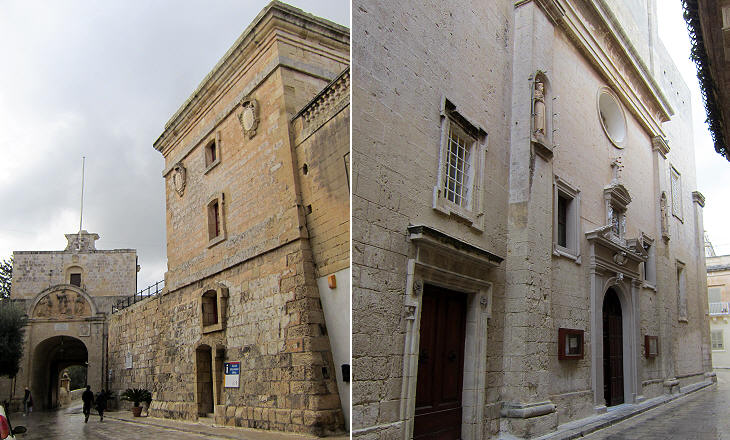 (left) Main Gate with a relief portraying the patron saints of the island and the Tower of the Standard; (right) St. Peter's, a church belonging to a Benedictine nunnery

The Grand Masters strengthened the fortifications of Mdina and during the 1565 Great Siege of Malta a handful of Knights and local soldiers were able to repel an Ottoman attempt to seize the town. A tower was built in the XVIIth century from which signals could be made to the other fortresses on the island.
The earthquake of 1693 damaged many buildings; Grand Master Vilhena promoted a major redesign of the area between the main gate and the cathedral; the chapel of St. Peter's is one of the few monuments which was not modified.

The image used as background for this page shows a decorative motif at Falson Palace, a much restored Norman building.