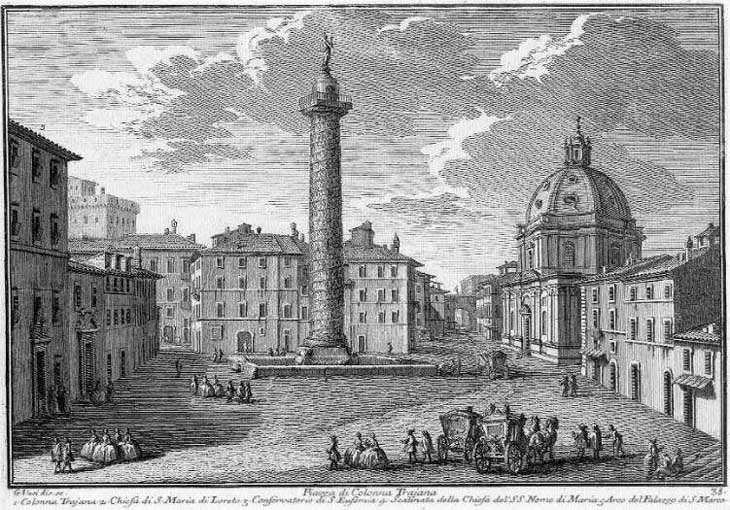 The column erected in 113 AD to celebrate Emperor Trajan's successful wars against the Dacians was the first monument of ancient Rome to be freed from later additions and protected from further damage.
The first steps for its conservation were taken by Pope Paul III in 1545 when he cleared the area around the column and he appointed a custodian who was paid by the City of Rome. This 1752 etching by Giuseppe Vasi shows that later on a small area was excavated to unearth the pedestal (which contained the Emperor's funerary cell) and that a low wall limited access to it.
The view is taken from the steps of SS. Nome di Maria on the lower right corner of the etching (green dot in the 1748 map here below). In the description below the plate Vasi made reference to: 1) Colonna Trajana; 2) S. Maria di Loreto; 3) Conservatorio (nunnery) di S. Eufemia; 4) Steps leading to SS. Nome di Maria; 5) Arco del Palazzo di S. Marco; 5) is covered in another page. The small map shows also 6) the site where Auditoria Hadriani were found in 2008. The dotted lines delineate the borders among Rione Pigna (upper left quarter), Rione Trevi (upper right quarter), Rione Campitelli (lower left quarter) and Rione Monti (lower right quarter). 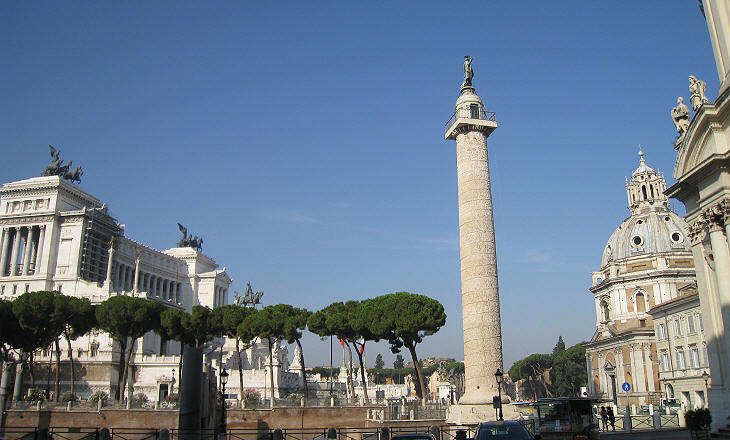 The right side of Vasi's view is almost unchanged whereas the buildings on its left side have been removed. The first changes occurred in 1812 when Conservatorio di S. Eufemia and the adjoining Monastero dello Spirito Santo were pulled down to excavate Trajan's Forum (Basilica Ulpia). In the late XIXth century the appearance of the square surrounding the column was entirely changed by the construction of Monumento a Vittorio Emanuele II. Eventually in the 1930s some remaining houses were demolished to open Via dei Fori Imperiali. 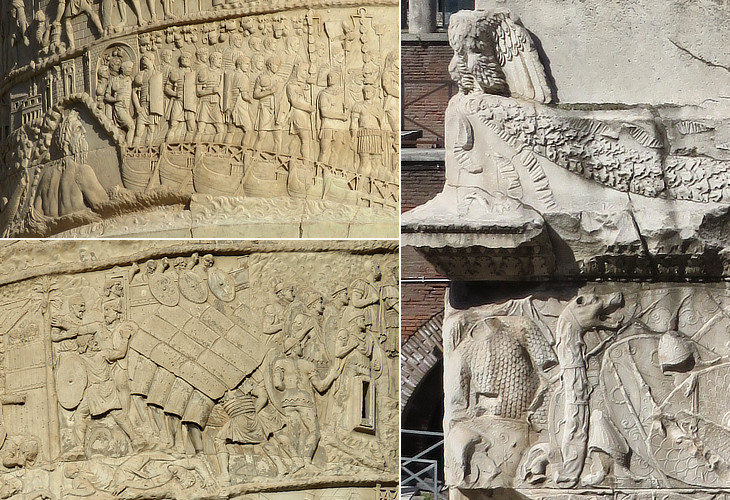 (left) Trajan's column; (centre-above) the Roman army crosses the River Danube on a boat bridge; (centre-below) the Romans attack a Dacian fortress in a testudo (turtle) formation; (right) relief on the pedestal showing a dragon, a military emblem of the Dacians

It stands in a Small Square and the Ground all about having been Rais'd as Usual in Length Of Time, and Clear'd away at the Bottom, it stands in a Hole, into which you descend by several Steps if you would enter the Pillar: This Hole is so Deep that at some Distance the Pillar seems to be without any Pedestal. It is pity all the Filth and Nastiness which is continually about it were not Prevented, or Remov'd. The Pillar it self has a Noble Look; and not less so by being pretty much injured by Time, and Otherwise; 'tis of a Darkish, Grey Colour; the Work is extremely Good. (..) I have been assured that this Pillar is composed of single Stones pil'd one upon another like Cheeses, being hollowed.
Jonathan and Jonathan Richardson - Account of Some of the Statues, etc. in Italy - 1722
In the evening I climbed the column of Trajan (via an internal spiral stair leading to the small balcony). Seen from that height and at sunset, the Colosseum, with the Capitol close by, the Palatine behind and the city all around, it was a superb sight.
J. W. Goethe on July 23, 1787 - Italian Journey - translation by W. H. Auden and E. Mayer - Collins 1962. The dedicatory inscription of the column says that the monument indicates "the height which this hill and place attained, before they were removed for such great works as these". It is a reference to Velia, a hill between the Quirinal and the Capitol, which was levelled to the ground to make room for Trajan's Forum. It is not the only monument by Trajan where the size aspect was emphasized as this was done for the cut of Pisco Montano at Terracina as well.
The column was not meant to provide a panoramic view of Rome because it was placed between two tall buildings. The 660 ft. spiral band of reliefs gives a detailed account of Trajan's wars against the Dacians. To learn more about these wars and the reliefs see a page on Two Roman Wars. 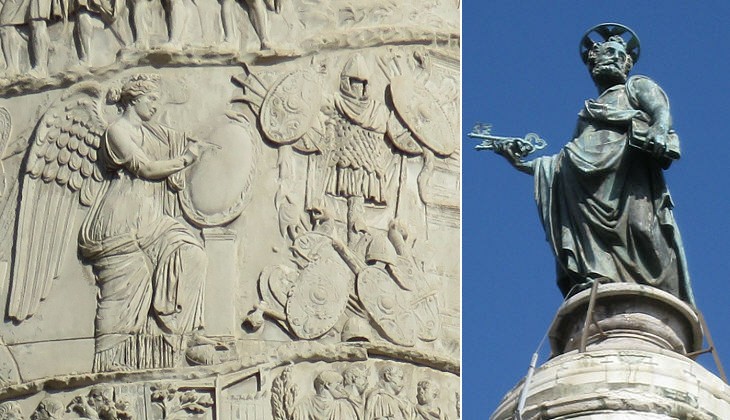 (left) A winged Victory writes the history of the Dacian Wars (it shows up in the image used as background for this page too - see a similar statue at Brescia and reliefs depicting military trophies at Orange); (right) statue of St. Peter by Tommaso Della Porta and Leonardo Sormani

An image of Victory writing on a shield separates the accounts of the two campaigns Trajan waged against the Dacians. This image influenced many Baroque funerary monuments, including that from which the icon of this website was developed.
In 1589 Pope Sixtus V placed on the top of the column a statue portraying St. Peter, thus giving the ancient monument a Christian purpose, similar to what he did at Colonna Antonina. As a matter of fact Trajan, unlike the other Roman emperors before Constantine, was no longer regarded as a cruel persecutor of Christians, at least since the XIVth century. According to an account mentioned by Dante, Pope Gregory the Great prayed for the Emperor's soul. Trajan was resurrected, was baptized by the Pope and was therefore able to access Purgatory where Dante met him. 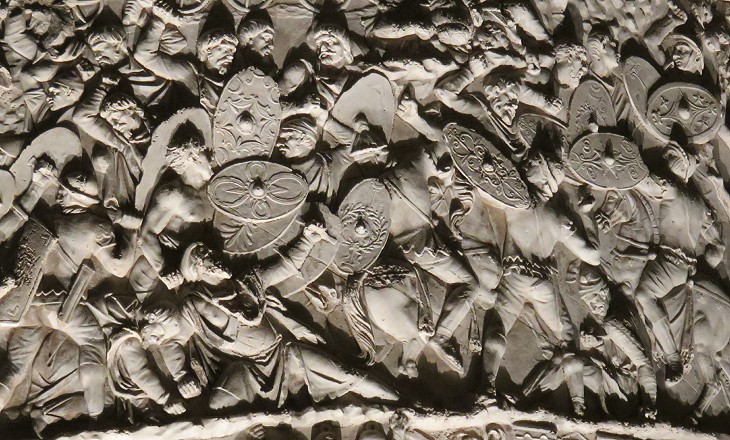 A night view of a relief showing the subjugation of a Dacian tribe. The artificial light emphasizes the decoration of the shields

The reliefs had a great influence on Renaissance and Baroque artists. The first artist who studied them in depth was Antonio Averlino, known as il Filarete, who worked in Rome in 1443-445 at the decoration of the main door of S. Pietro. At the beginning of the XVIth century Jacopo Ripanda, a painter from Bologna, made a series of drawings of the reliefs, including those at the top of the column. In order to make these drawings he was suspended from the column in a cane basket (see one of them - it opens in another window). At that time most houses had a painted façade and the reliefs inspired many artists: this is still visible in Palazzo in Via della Maschera d'Oro.
The detailed study of the reliefs showed that in origin the fighters held bronze weapons. This had an influence on the XVIIth century statues of the Apostles on the façade of S. Pietro: each saint holds a bronze symbol of his martyrdom. Plaster copies of the lower parts of the column were made by several artists in the XVIth century. In the XVIIth century Pietro da Cortona copied most of the column. King Louis XIV, who saw himself as the "Trajan of France", ordered a full plaster copy of the reliefs for the pupils of Accademia di Francia in Roma which he founded in 1666. A second copy was sent to Paris. 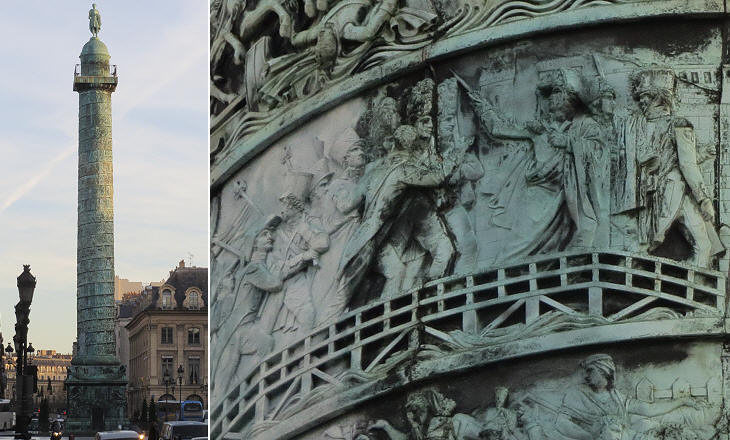 (left) Colonne Vendôme in Paris; (right) detail showing Napoleon Bonaparte leading his troops at the Battle of the Arcole Bridge (1796) near Verona

In 1739 two columns similar to Colonna Traiana and Colonna Antonina were erected at the sides of Karlskirche in Vienna.
In 1810 Napoleon erected a bronze column in Paris identical to that of Trajan with reliefs depicting his victorious campaigns. Unlike Trajan, he was portrayed while personally leading his troops. 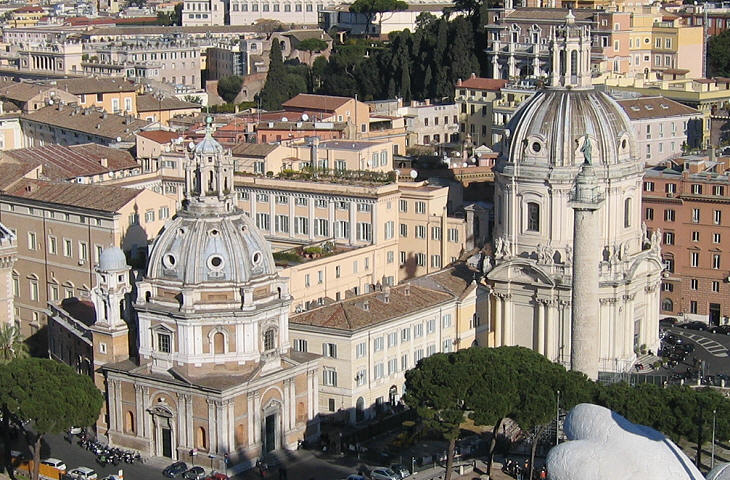 S. Maria di Loreto (left) and SS. Nome di Maria (right) seen from Terrazza delle Quadrighe at the top of Monumento a Vittorio Emanuele II (between them Palazzo Valentini and in the upper part of the image the trees of Giardino Colonnese). The stone pine in the lower left corner was pulled down in 2008 when excavations were made which led to unearthing "Auditoria Hadriani"

Similar to S. Maria dei Miracoli and S. Maria in Montesanto in Piazza del Popolo, these two churches are often associated because of their appearance and proximity, but the histories behind their construction are very different. 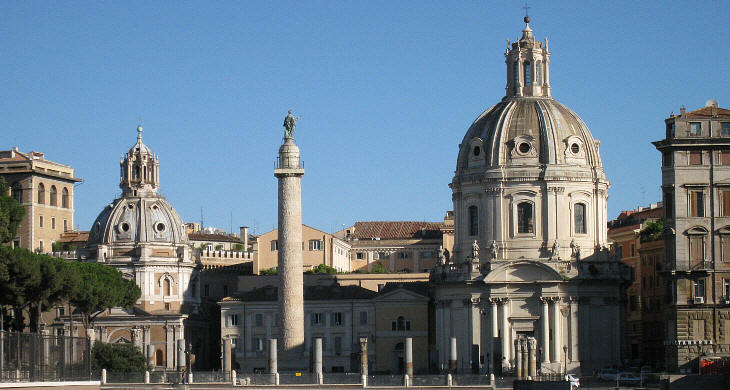 S. Maria di Loreto was built in the XVIth century by the guild of the bakers, together with an adjoining hospital. Michelangelo lived for many years and eventually died in a modest house opposite this building.
SS. Nome di Maria was built in 1735-751 based on a project by French architect Antoine Derizet who ensured the new church had some consistency with S. Maria di Loreto. The celebration of the Holy Name of Mary was instituted in the XVIth century, but it became a major feast after the September 1683 victory of John III Sobieski, King of Poland, on the Ottomans who were laying siege to Vienna; the victory was attributed to the intervention of the Virgin Mary. In 1534 Antonio da Sangallo completed the lower part of the church which has a cubic shape; in 1573 Jacopo del Duca, a scholar of Michelangelo, built the high drum and the dome including the almost baroque lantern (you may wish to see the church in a 1588 Guide to Rome). The interior was designed and decorated in the XVIIth century when Gaspare de Vecchi created a long tribune/main chapel which was dedicated to Our Lady of Loreto. 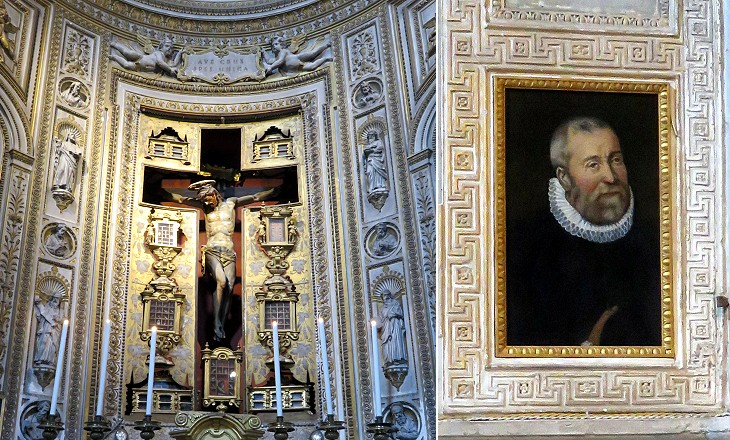 The earliest records of the bakers' guild are dated 1318. Confraternita dei Fornari, the brotherhood of the bakers, was founded in ca 1500. It continued to exist after the guild system was dissolved in 1800 and it still owns the church (see a list of churches belonging to a guild). 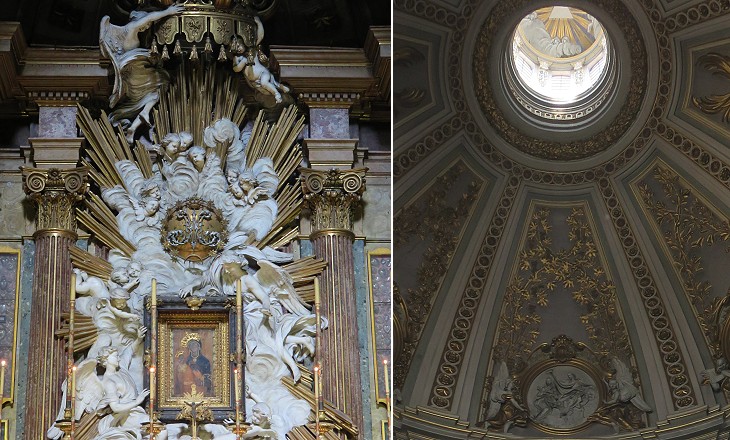 The church was built to house the meetings/ceremonies of a brotherhood founded in 1642. In 1688 Pope Innocent XI gave the title of Arciconfraternita (Superior Brotherhood) to the brotherhood in recognition of the prayers of its members to help the Christian victory at Vienna. The construction and decoration of the church was delayed by financial difficulties. While the bakers decorated their church with real marbles, the members of the brotherhood of SS. Nome di Maria were often compelled to use painted marbles and stuccoes. 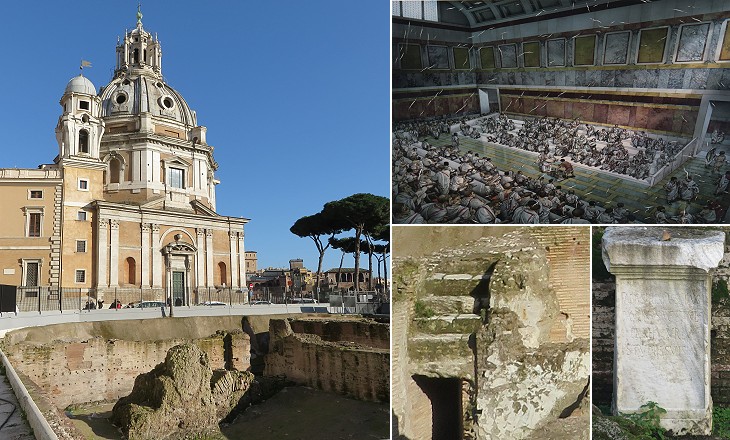 (left) A view of the excavated area showing the unusual bell tower designed by Del Duca; (right-above) a rendering of one of the halls; (right-below) steps and a base with a dedication of a statue (Vth century AD)

The presence of some ancient walls beneath the Bakers' Hospital was uncovered when part of the building was pulled down to enlarge Piazza Venezia in the late XIXth century, but the area was hidden again by a small garden. More in-depth excavations were made to identify a suitable location for a new underground railway station in 2007 and they soon led to unearthing the structures of three large halls. Construction techniques and materials suggested that they were built at the time of Emperor Hadrian. Historic records indicated that the Emperor built an Atheneaum, an institution for the promotion of literature and science, in Rome, similar to that he built in Athens of which the library still exists. The location of the Roman Atheneaum was unknown because historic records did not provide clues about it, but now it is believed to have stood near S. Maria di Loreto and to have included three auditoria (lecture classrooms).