Utica
(detail of the theatre at Thugga)

Utica was a maritime city, situated betwixt Carthage and the Promontory of Apollo (at the western end of the Gulf of Tunis), we are to search for it upon the interjacent sea coast. But here are no ruins at all to be met with in this situation; there is no eminence, under which Utica is said to have been built; there is no promontory, which lay at a small distance to the E. or N.E. and formed the harbour. (..) Utica therefore cannot be found upon the sea coast, according to the present shape and fashion of it, by any of those tokens and characteristics that are left us of it by the ancients.
Thomas Shaw - Travels, or, observations relating to several parts of Barbary and the Levant - 1738 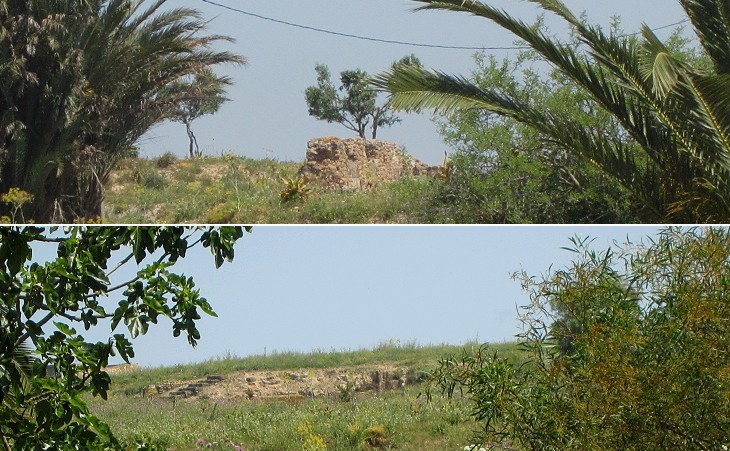 From this place (north-west of Tunis) commences an extensive and level plain, parts of which evidently appear to have been wrested from the sea; and winding through it can still be traced two of the former beds of the Bagrada, the present Majerdah, (..) We crossed the river in a horse-boat. (..) In an hour we reached the ruins of Utica. (..) The remains of Utica occupy a long tongue of land, which, lofty to the west, sinks gradually down, and mingles with the plain on the east. But where once stood the ancient and the powerful Utica, nothing but a few miserable huts, (..) are to be seen - at least no other buildings of modern times, for a few of its ancient ruins are still extant. (..) The principal of these consist of an aqueduct, cisterns, an amphitheatre, and some shapeless masses of masonry. (..) Some distance beyond stood the citadel, defended by a ditch to the west, and rendered strong in other parts, especially at the eastern extremity, by the great steepness of its sides. Below the citadel are seen numerous remains of edifices, broken columns, &c. (..) To the north of the heights, as I before observed, was the harbour, where we see some considerable, though shapeless ruins, standing upon a little circular island joined to the main by either a bridge or causeway. (..) Many excavations have been made at Utica, by Hammooda Pasha (Bey of Tunis in 1782-1814), and the present Bey, and I was told that several statues, inscriptions and columns have been discovered; what have become of the former I know not, but the columns have been employed in adorning several palaces.
Sir Grenville Temple - Excursions in the Mediterranean - 1835

British Museum: mosaic from Utica depicting the capture of wild animals .. by fishermen!

The excavations which were carried out in the early XIXth century were mainly aimed at finding columns and marbles for the palaces of the Beys. Other excavations of the XIXth century focussed on finding statues, mosaics, jewels, coins, etc, rather than on preserving the remaining monuments of Utica. In 1881 an exhibition of such findings opened at the Louvre Museum in Paris and in 1885 the exhibits were permanently acquired by the museum. Other artefacts from Utica were acquired by the British Museum.
Nets were used to capture alive wild animals for the combats in the amphitheatres; this activity was widely practiced in Northern Africa as shown in an impressive mosaic at Hippo Regius. A very large mosaic at Villa del Casale in Sicily depicts the shipping of the animals to Italy. 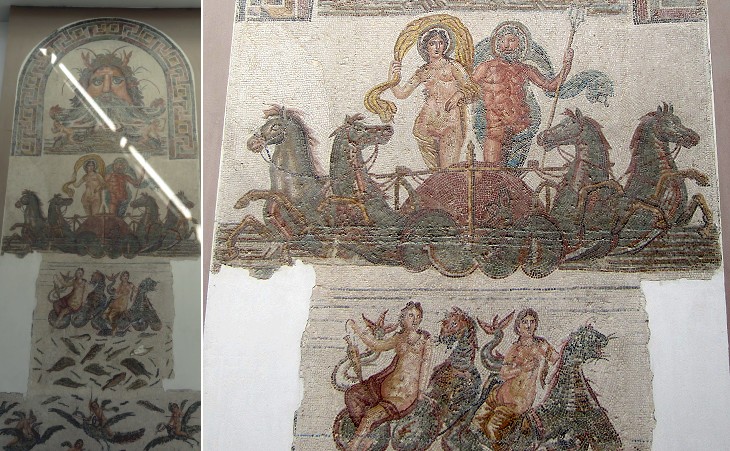 Museum of Bardo: very large mosaic found at ancient Utica in 1914 and depicting a head of Oceanus, Neptune and his wife Amphitrite and two Nereids, sea nymphs; the divine nature of Neptune and Amphitrite was highlighted by "velificatio", i.e. a billowing mantle over their heads; see another example at Sousse

New excavation campaigns were carried out after the establishment of a French Protectorate over Tunisia in 1881. The finest mosaics were moved to the Museum of Bardo, while others were placed in a local museum. The mosaic shown above is very large and it hangs on a wall which has the height of a three storey building. It was found in a bath establishment and it decorated a double hall. 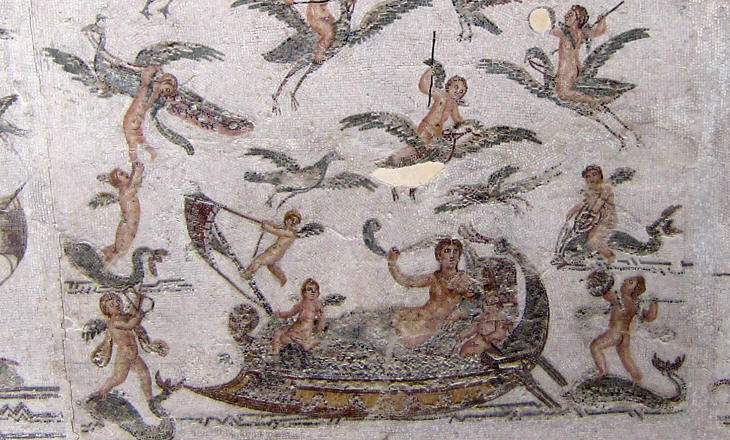 Museum of Bardo: detail of the section of the mosaic in the second hall with Cupids hunting while riding dolphins and birds and Venus on a ship (see this latter subject in a famous mosaic from Volubilis)

While the overall layout of the mosaic in the first hall is rigid and somewhat conventional, the mosaic maker showed his ingenuity in portraying Cupids in scenes which are full of life, similar to what can be seen at Uthina and Villa del Casale in Sicily. 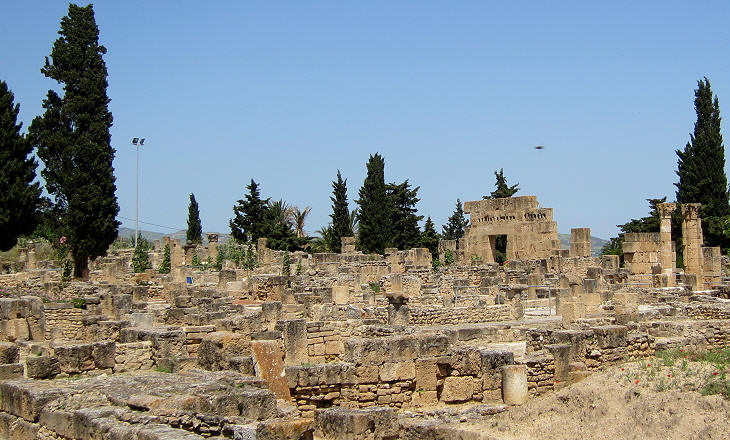 View of the "insula"

Utica did not have a proper archaeological site until a series of houses were found between 1948 and 1958. They constitute a typical Roman insula, i.e. a block of buildings limited by perpendicular roads. In 1990 the local museum was moved to a new building near the excavations to house the mosaics and other findings which could not be left in situ.
The houses are evidence of the wealth of Utica, which was founded by the Phoenicians before Carthage. Its location at the mouth of the Mejerda River favoured its development as a port. During the Third Punic War Utica sided with the Romans who made it the capital of the newly established Province of Africa. Initially it included the north-eastern part of today's Tunisia, but in the Ist century BC it was enlarged with territories now in Algeria and Libya. The decline of Utica was caused by the floods of the Mejerda River which silted its port. The Romans reactivated the harbours of Carthage which became the capital of the province. 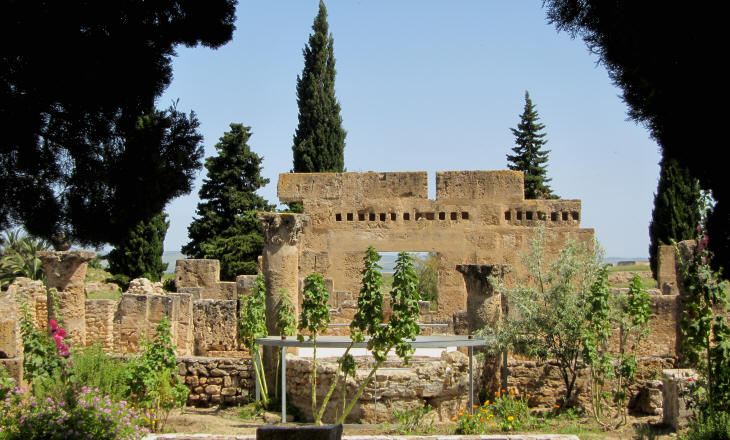 Waterfall House and its second entrance on the back street

In the British real estate market the houses of the insula would have been classified as "terraced", as they were aligned along the street and were similar in style and size. One of them however was enlarged by incorporating other plots and it had another entrance on the back street. It owes its name to a very small fountain having the aspect of a waterfall (see a very fine one at Tarragona). The house was arranged around a large peristyle, a colonnaded courtyard. 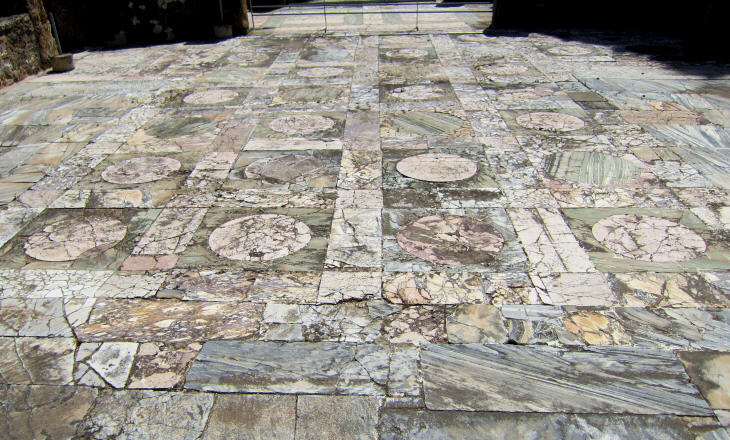 The Romans, especially during the IInd century AD, had a penchant for coloured marbles such as cipollino a green marble from Euboea or the yellow/red marble of Simitthus in the upper valley of the Mejerda River. The latter was shipped to Rome from Utica. The floor decoration at the Waterfall House was made up by assembling fragments of marble taken from other buildings, something which has led archaeologists to date it IVth century. This technique is known as opus sectile (marble inlay, see an impressive example at Ostia). The image used as background for this page shows a similar marble floor at the Museum of Utica. 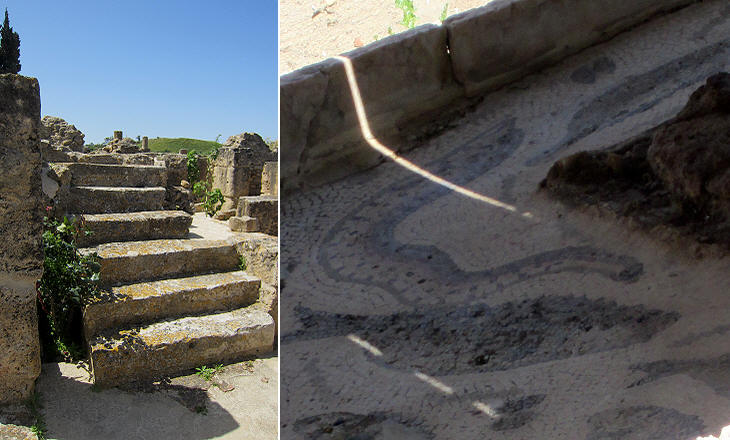 Waterfall House: (left) steps to the upper floor, the private section of the house; (right) mosaic of the waterfall

I account it high time to get to sea as soon as I can. This is my substitute for pistol and ball. With a philosophical flourish Cato throws himself upon his sword; I quietly take to the ship.
From the opening paragraph of Herman Melville's Moby Dick.

One reason which made archaeologists search for Utica was its association with the death of Marcus Porcius Cato the Younger, a supporter of the Roman Republic tradition who fought against Julius Caesar and chose to kill himself at Utica rather than seeking Caesar's mercy, after the defeat of his party at Thapsus in 46 BC. In addition to poets and novelists the episode inspired many painters such as Guercino and Delacroix (it opens in another window). 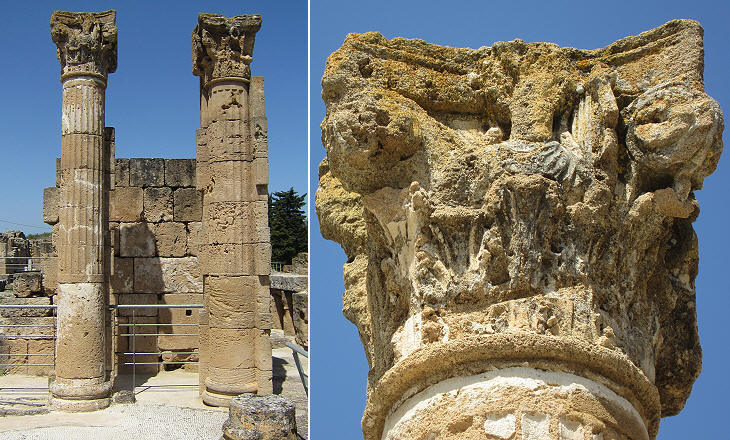 The House of the Decorated Capitals was built in the Ist century AD. It had a courtyard with twelve fine columns, two of which retain their capitals. By closely observing their elaborate decoration it is possible to notice the figures of some gods, as it occurs in other faraway locations, e.g. at Corinium (Cirencester). 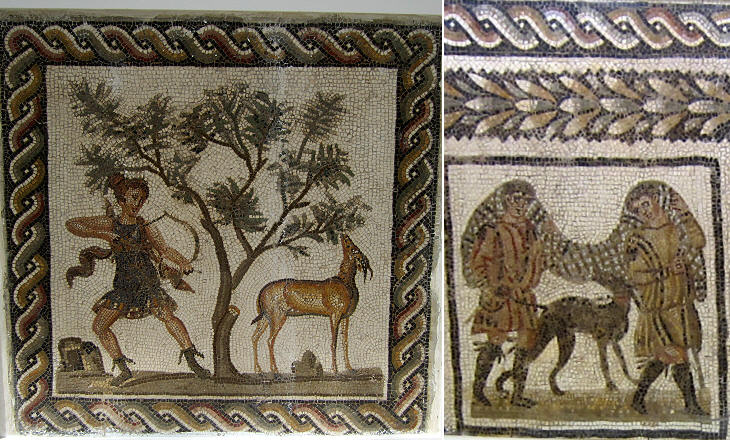 Hunting scenes: (left) Museum of Bardo (from Utica); (right) Museum of Utica (from the House of the Hunt)

Greek deities and heroes were the commonest subject of the mosaics in Roman Africa, although the country had not had much direct exposure to the Greek world. When the same subject is depicted both in the mythical environment and in actual life, one thing which always strikes is the difference in clothing. While deities were portrayed almost naked (see another mosaic from Utica at the Museum of Bardo), real human beings, even servants, were depicted wearing warm clothes with long sleeves (see other mosaics showing these clothes at Uthina and Villa del Casale). 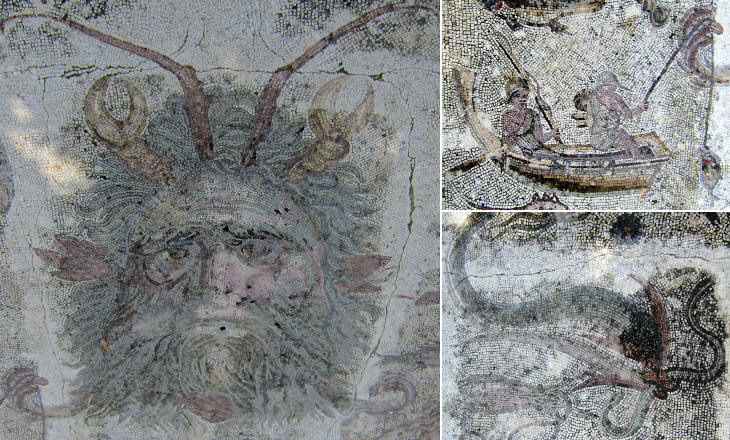 Giuseppe Arcimboldo was a XVIth century Italian painter best known for his portraits made entirely with fruits, vegetables or flowers (see a portrait of Spring - it opens in another window). He would have enjoyed seeing this head of Oceanus, almost made up with crab claws and other parts of sea creatures. This iconography can be found in mosaics throughout the whole Roman Empire, although crab claws were not always given such prominence (see two more flattering portraits of the god at the Museum of Sousse and a mosaic which was found at Zeugma on the Euphrates River). 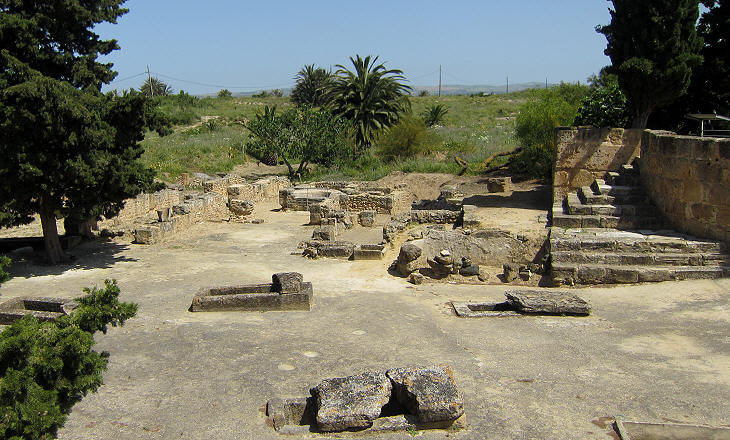 The discovery of the houses of the Roman insula originated from excavations carried out to unearth a Punic necropolis which was partly covered by the Roman houses. The overall site where ancient Utica stood has been identified with some precision and excavations are being carried out to enlarge the archaeological area. 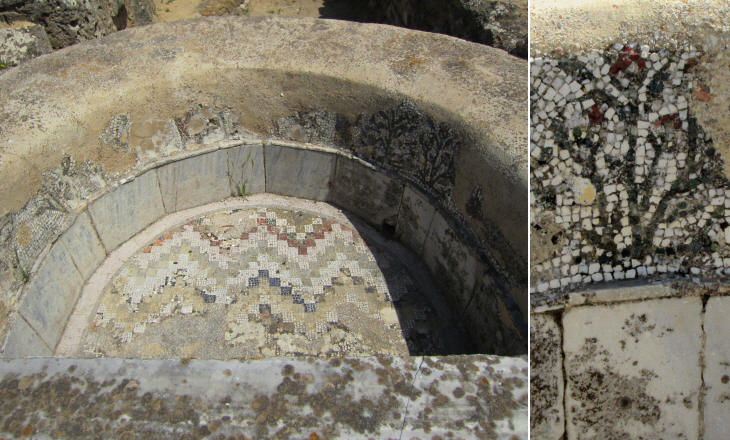