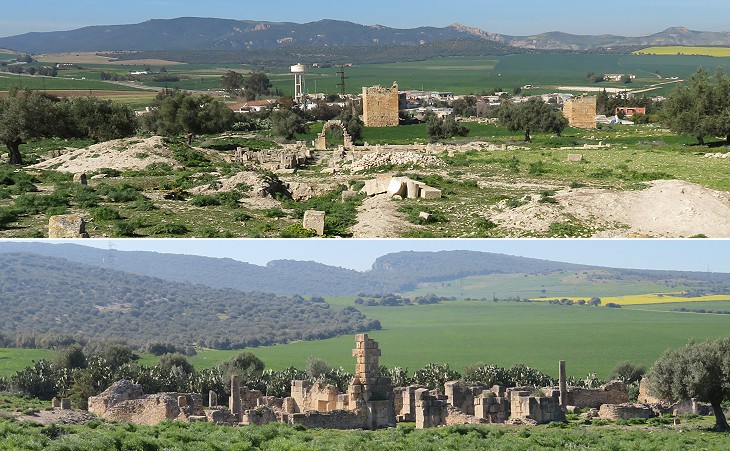 (above) View of the Marketplace and of the Byzantine fortress from the Temple; (below) view of the Baths; see other landscape views of the town in the introductory page

A little further on is Ain-Tunga, or Thignica, a small village now, whose importance in the past is shown by the ruins scattered round a few poor houses. The Byzantine fort still preserves an air of solid strength, but only fragments enough remain to excite a languid interest in the two temples, the theatre, and a triumphal arch. As the shadows lengthened, the country became more and more charming, for we were nearing the borders of Khroumirie, the most beautiful part of Tunisia. Clear streams and glades of olive trees became more frequent, and peeps of distant mountains gave variety to the hills and dales of a pastoral land.
Algeria and Tunis - painted and described by Frances E. Nesbit - Published by A. and C. Black - 1906 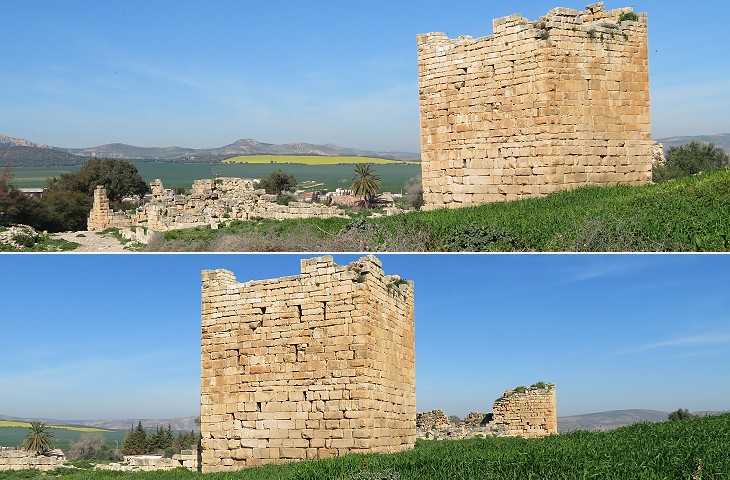 Byzantine Fortress: southern (above) and eastern (below) sides

Here are the extensive ruins of the ancient Thignica. Bruce is absolutely silent regarding his visit to this place; nevertheless he has left live sheets of drawings illustrative of it, (..) but not of the Byzantine fortress. The last-mentioned is now the most conspicuous ruin in the place. Bruce has left no sketch of it; indeed, throughout all his wanderings he paid no attention whatever to buildings of this period, which, though by no means uninteresting from an historical point of view, are absolutely devoid of any architectural merit. The exterior walls are in a very perfect condition, as are also the towers at each angle, but the interior is so choked up with a rank growth of weeds and scrub, that to examine it is almost an impossibility.
Travels in the footsteps of James Bruce (1730-1794) in Algeria and Tunis, illustrated by facsimiles of his original drawings; by R. L. Playfair - 1877 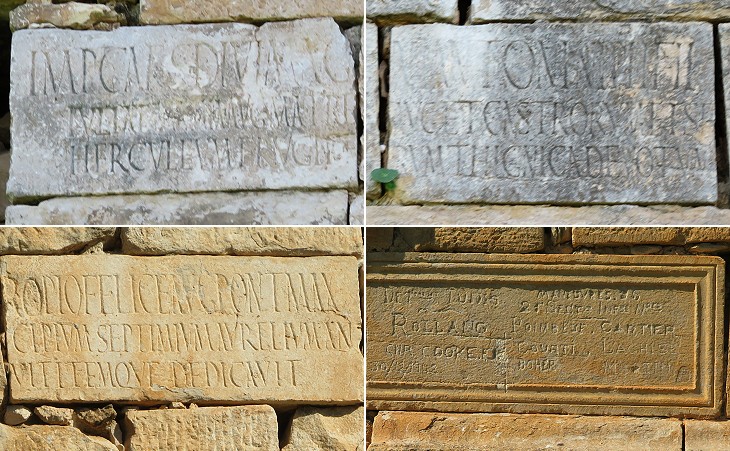 Three fragments of the inscription mentioned below and some modern ones in the Byzantine fortress; one of them indicates that the place was held by Allied troops on December 30, 1942

Numerous inscriptions are still to be seen here; (..) the most important one, in six fragments, records the full name of the place, "Municipium Septimium Aurelium Antoninianum .... Herculeum Frugiferum Thignica" and commemorates the reconstruction of its market place in the time of Alexander Severus and of his mother Julia Mamea, a.d. 222-235. Playfair 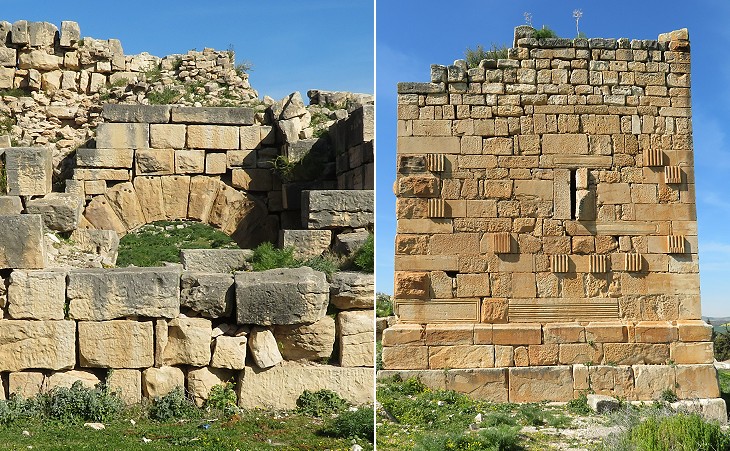 Byzantine Fortress: (left) entrance protected by an outer wall; (right) north-eastern tower with decorative fragments; the image used as background for this page shows a worn out relief on the main tower

The fortress was built after 533 when a small Byzantine army managed to conquer the Province of Africa which had been occupied by the Vandals in 439. The Byzantines could rely on a strong fleet which granted them the control of the sea, but in the interior of the Province they could only establish some garrisons inside fortresses which were built in a haste and by using materials from other buildings, as it occurred also at Musti and Thugga, two Roman towns west of Thignica in the River Mejerda Valley. 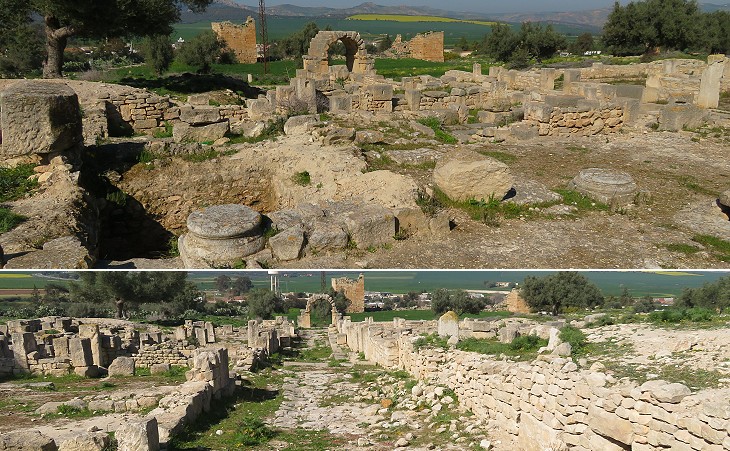 Views of the marketplace/housing development

There exist also several other remains of less interest: a small and plainly constructed arch and theatre of rubble masonry, a Christian basilica, besides traces of various other buildings scattered about. Playfair
The name of the town begins with Th which is indicative of its existence before the Roman conquest. This applies to many other ancient towns in Tunisia and also in Algeria, e.g. Thamugadi. Inscriptions suggest that initially its inhabitants formed two distinct communities: the cives of Roman/Carthaginian origin and the peregrini, free local subjects. This distinction disappeared in the early IIIrd century during the rule of Emperor Septimius Severus when Thignica became Municipium Septimium Aurelium Antoninianum Herculeum Frugiferum. 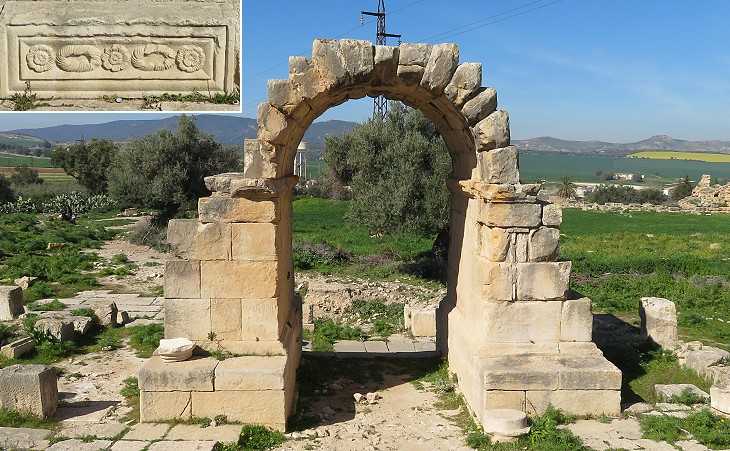 Triumphal arch at the entrance to the housing development; (inset) a decorated stone near the arch

This small arch was mentioned by the first European travellers and it appears to have been partly restored in the XIXth century. The area near the arch was excavated in the 1960s and a series of houses were identified; they were aligned at the sides of a paved decumanus (east-west street) which ended at the arch. Two small squares along the street might have been marketplaces. The arch was perhaps similar to one at Musti, but of a smaller size. 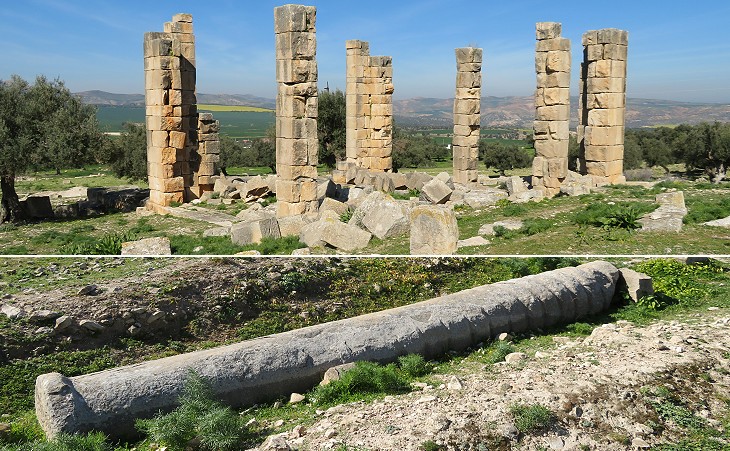 (above) Cella of a temple at the top of the hill; (below) a spiralling monolith column near the building

The Corinthian temple must have been almost as fine as that of Dougga; the portico is now entirely destroyed, and all that remains are the angles of the cella. The masonry was of an unusually fine quality, and the columns were magnificent monoliths. In Bruce's time the portico was still entire, with the exception of one angle of the pediment. It was a tetrastyle closely resembling the Temple of Jupiter and Minerva at Dougga, but even richer and more ornate in some of its details. Playfair
The temple stands at the highest point of a hill with a commanding view over the town. There are different opinions about to whom it was dedicated, maybe Mercury, and also its dating is uncertain.
Records indicate that the Catholic and Donatist bishops of Thignica attended the 411 Council of Carthage, but there is no very clear evidence of a church. 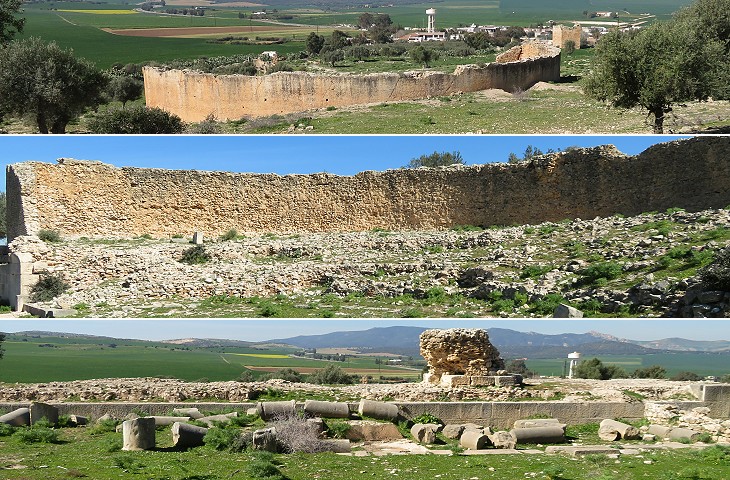 The first archaeological accounts of Thignica mentioned a "semicircular monument" because only the very upper part of the external wall of the theatre was visible. The excavations brought to light the real height of the wall which withstood the ravages of time whereas there is almost no evidence of the seating section and of the stage. They most likely were dismantled to utilize their stones in the fortress. 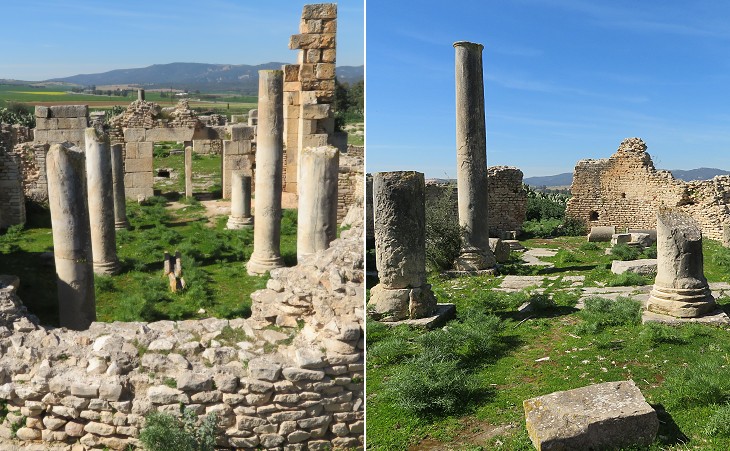 A building with two apses in the lower part of the town was initially believed to have been a church, but excavations made it clear that it was the frigidarium of a bath establishment which was adjoined by two palaestrae for exercising. The tepid and hot rooms are yet to be clearly identified and studied, but it seems that the complex was downsized to the frigidarium prior to its final abandonment. 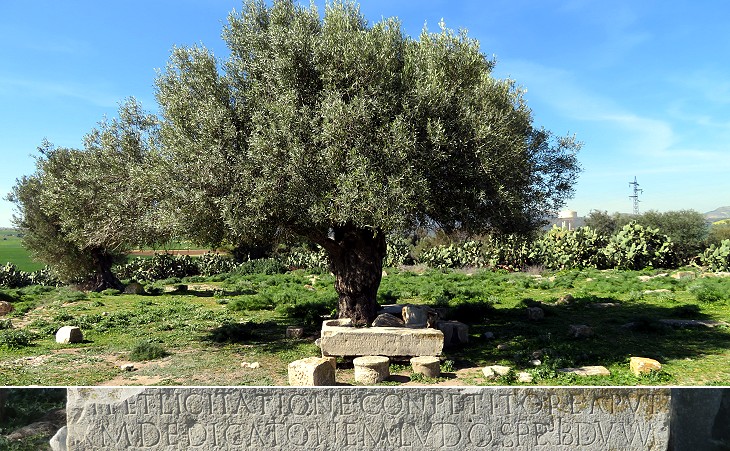 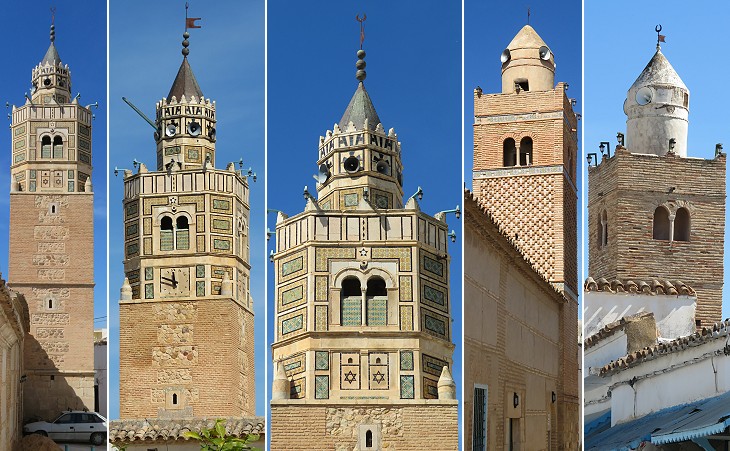 (left/centre) Minaret of the Great Mosque; (right) other minarets

About four miles further on we came to Testour. (..) The modern city is built on the site ot the ancient Bisica Lucana, a city unknown to history. (..) There are still many inscriptions scattered about. Testour is a squalid village, whose sole merit is to have wide and airy streets. (..) Still it is not quite without remains of former grandeur; the minaret of the great mosque, though in a very dilapidated condition, is a good specimen of Moorish architecture, and has been tastefully decorated with coloured tiles. This was probably the work of the Andalusian Moors, by whom the village was peopled, on their expulsion from Spain. Playfair 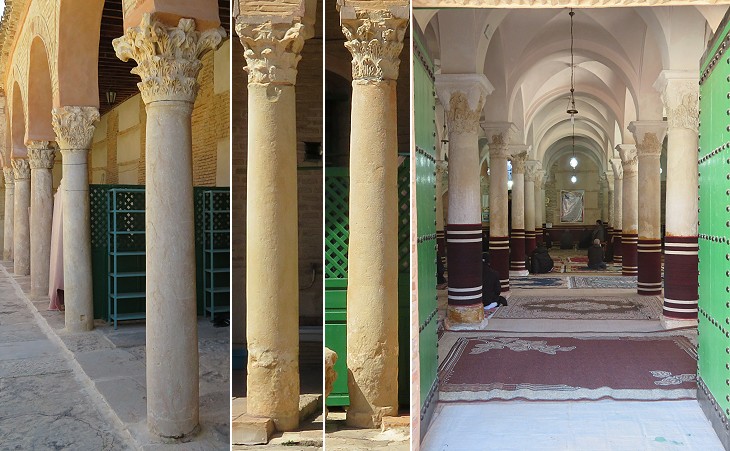 Ancient columns in the Great Mosque

In 1609 King Philip III of Spain issued a decree to expel all Muslims from Spain. The bulk of those who left lived near Valencia, but when they landed in Morocco, Algeria or Tunisia they were called Andalusians, after the region of the prosperous Emirates of Cordoba and Granada. Testour at the time was a small village on the site of Tichilla, a minor Roman settlement. The Ottoman rulers of Tunisia assigned it to a group of refugees. The newcomers built a town in the style of their native country, in particular the minaret of the Great Mosque was designed having in mind La Giralda of Seville. They utilized many columns and other materials from the Roman town. Zaghouan is another Tunisian town with a distinct Andalusian aspect. 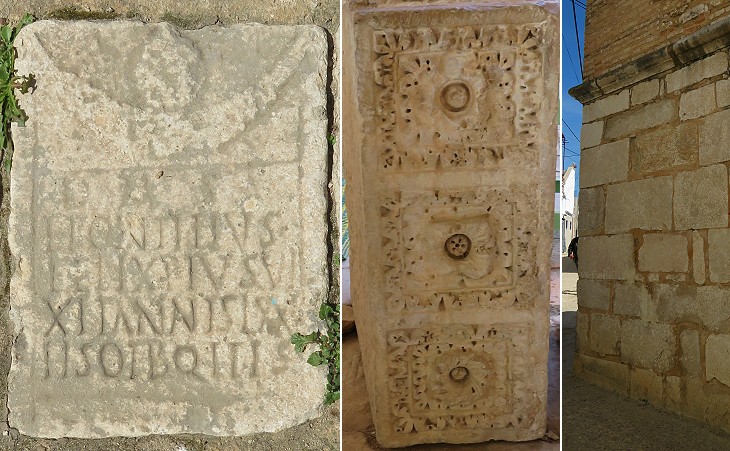 Other Roman materials at the Great Mosque: (left) a tombstone with a half moon surrounding the sun, a symbol of Tanit, a Carthaginian goddess; (centre) a section of a decorated ceiling; (right) ancient stones at the base of the minaret