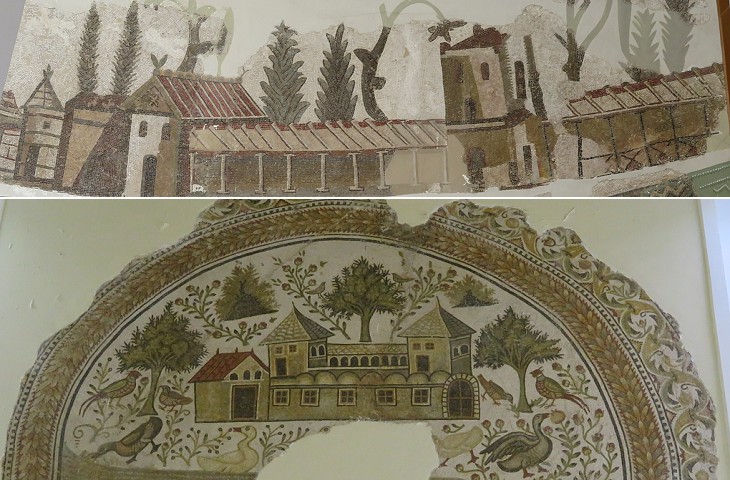 Museum of Bardo: mosaics depicting countryside villas/farms: (above) detail from a very large mosaic from Carthage; (below) mosaic from Tabarka, a port near Simitthus

There is no grain more prolific than wheat, Nature having bestowed upon it this quality, as being the substance which she destined for the principal nutriment of man. A modius of wheat, if the soil is favourable, as at Byzacium, a champaign district of Africa (the region around Hadrumetum - Sousse), will yield as much as one hundred and fifty modii of grain. The procurator of the late Emperor Augustus sent him from that place - a fact almost beyond belief - little short of four hundred shoots all springing from a single grain; and we have still in existence his letters on the subject. (..) In Byzacium, the soil is such, that in time of drought, not even bulls are able to plough it; while, on another occasion, just after a shower of rain, one poor ass, with an old woman to guide it, is quite sufficient, as ourselves we have witnessed, to do the ploughing.
Pliny the Elder - The Natural History - Book XVIII and XVII - Translation by John Bostock and H.T. Riley.
The second excerpt indirectly tells us that when Pliny wrote his encyclopedic work, in ca 70-77 AD at the time of Emperor Vespasian the size of the farms was still a small one. Things soon changed and large estates (latifundia) replaced the small farms. Their owners built complexes which were at the same time a mansion and the headquarters of farming activities, similar to Villa dei Volusii near Rome. 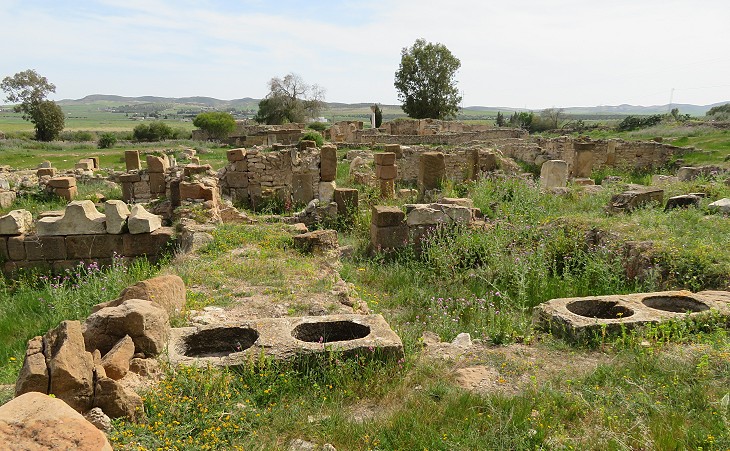 The remains of a luxury private bath establishment were found in 1975 near the town of Borj el Amri, 30 km south-west of Tunis along the road leading to Testour in the River Mejerda Valley. The villa was well situated for transport and communications, just off the direct route between Carthage and Thugga in an area which is still extensively farmed. The site was not entirely excavated in 1975 and it is unlikely to ever be, so there is very small evidence of both the residential and the agricultural buildings. The baths were separated by a courtyard (most likely a porticoed one) from the rest of the complex. The place is not easy to find, but it is fenced and a warden made his appearance when I was visiting the site. 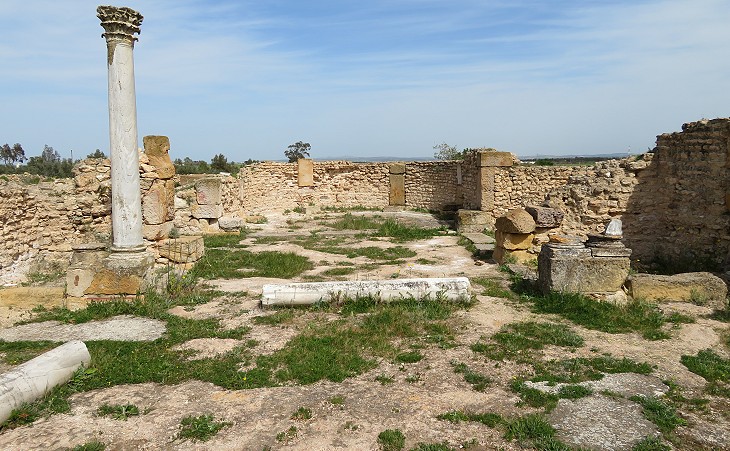 The elaborate design and the luxury of the decoration of the baths, suggest that the landlord was not just the owner of a large estate. He might have held an important position in the imperial administration of the province or in the municipality of Carthage. An inscription in the frigidarium says: Plus Feci Quam Potui Minus Quam Volui / Si Placet Commune est Si Displicet nostrum est (I did more than I could, less than I wished / If it is liked is everybody's merit, if not it is our fault). It is not an inscription one would place to show it only to the neighbouring landowners, it indicates that the villa was frequented by high-rank people. It is possible that it belonged to Dominus Julius (or to one of his friends) who had a villa with private baths which is depicted in a floor mosaic at this house at Carthage. 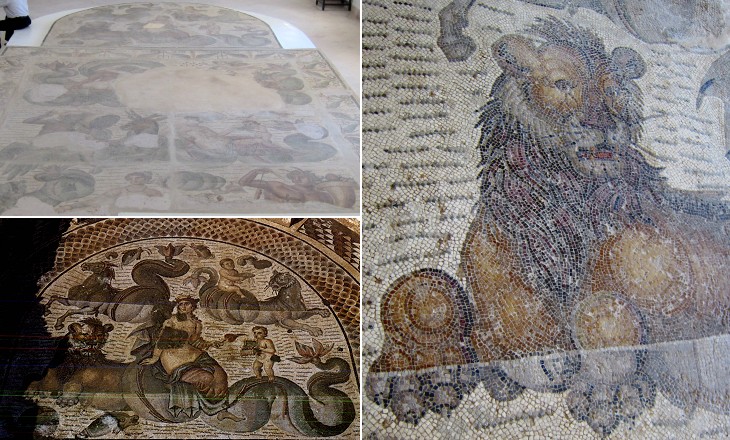 Museum of Carthage: (left-above) large mosaic portraying a sea "thiasos" in the "frigidarium" of the baths of Sidi Ghrib; (left-below) photo of the apse taken during the excavations; (right) detail showing a Barbary lion (see another striking mosaic depicting a lion at Sullectum)

The villa is also known as the Villa of the Sea Thiasos, a Dionysiac procession in which satyrs and maenads are replaced by tritons and Nereids, which is depicted in a mosaic of the frigidarium, similar to what occurs at Villa del Casale in Sicily. The subject is sometimes referred to as the Toilet of Venus or Amphitrite because a goddess is shown in the act of looking at herself in a mirror, as at Bulla, Cuicul (Djemila) in Algeria and Philippopolis in Syria. Sea thiasos were often depicted on sarcophagi (see examples in Rome and in Algeria). 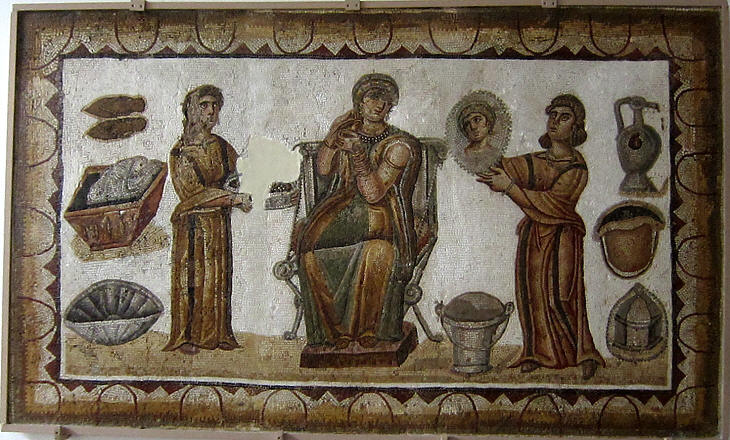 Museum of Bardo: The Toilet of Venus (replaced by the landlady), a mosaic in the vestibule of the baths of Sidi Ghrib: the image used as background for this page shows a detail

The mosaic is on display in the Christian Art section of the Museum of Bardo; the villa and its mosaics are dated late IVth century AD, more or less when Emperor Theodosius declared Christianity the sole religion of the Empire (ca 380). Africa was one of the provinces in the western part of the Empire where the new faith was adopted at an early stage. The decoration of the baths is compatible with a Christian ownership, although it does not have clear religious references. The owner of the villa was a member of the upper class and for his private residence he chose subjects which were part of the traditional cultural heritage. The scene of the toilet of the landlady could be reminiscent of the Roman wedding rituals in which the bride took a bath and then was dressed and adorned with her jewels for the official ceremony. A similar scene of toilet can be seen in a Late Empire relief at Trier in Germany. 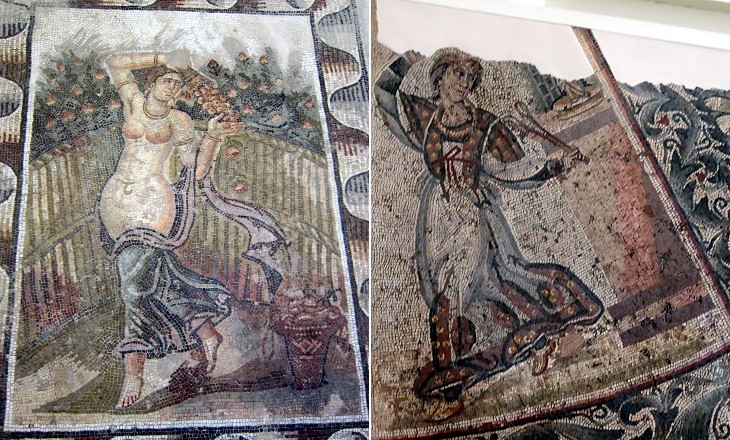 (left) Museum of Carthage: woman pouring roses into a basket, an allegory of Spring from a niche in the "frigidarium" of Sidi Ghrib; (right) British Museum: allegory of the Month of April from a mosaic found in a house at Carthage (learn more about this mosaic)

The Four Seasons were a very popular subject (even for the decoration of synagogues) and they remained so also after Christianity became the prevailing religion (see a sarcophagus at the Museum of Bardo). The two mosaics above show basically the same subject (Spring or April) and they are both dated late IVth century, but that from Sidi Ghrib shows a nudity which was not prudent to exhibit in an urban house, which was open to a larger number of guests or clients. 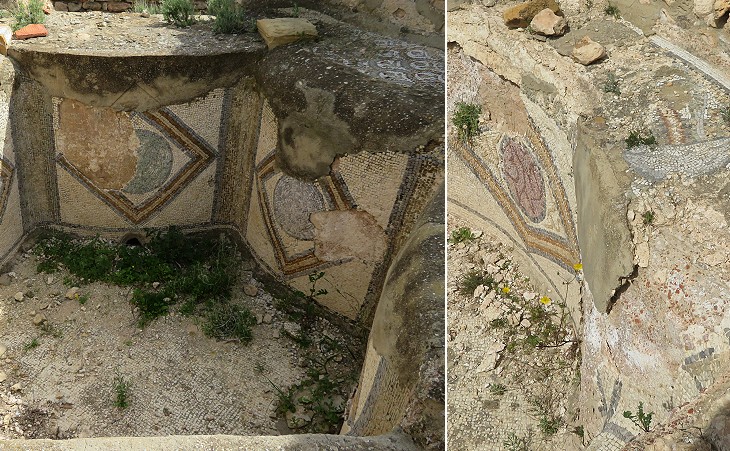 (left) A basin of the "frigidarium"; (right) a basin of the "calidarium" (hot room); eventually the practice of decorating these basins was applied to baptismal fonts, e.g. at Kelibia, Sufetula and Thapsus

The baths were utilized for a short period of time; archaeologists found evidence that they were "mothballed" by sealing the water conduits and closing the furnaces. External causes for this could have been the violent rifts between Donatists and the official Church or the invasion of Africa by the Vandals in 439. The buildings housing farming activities were used for a longer period. The economy of the province collapsed after the Byzantines conquered it in 533 because they were unable to provide security in the inland parts of the country. Over the centuries the remains of the villa were turned into a small village around the tomb of a local Sidi (holy man). 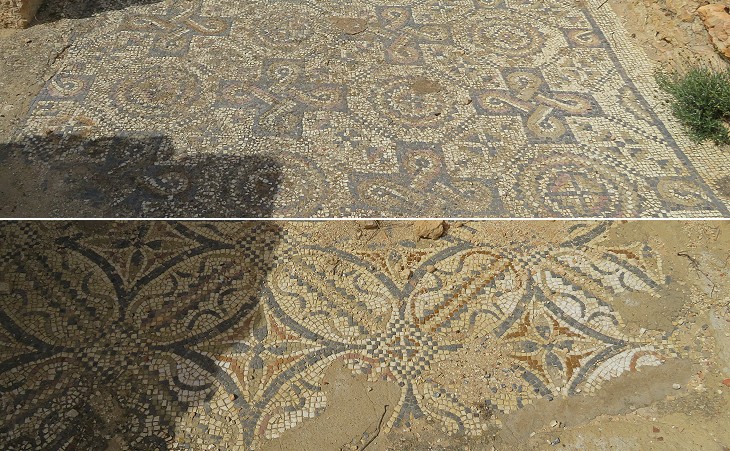