Bulla Regia - The Houses
(detail of the theatre at Thugga)

You may wish to see an introductory page to this section or a page about the foundation of Bulla and its main monuments first. 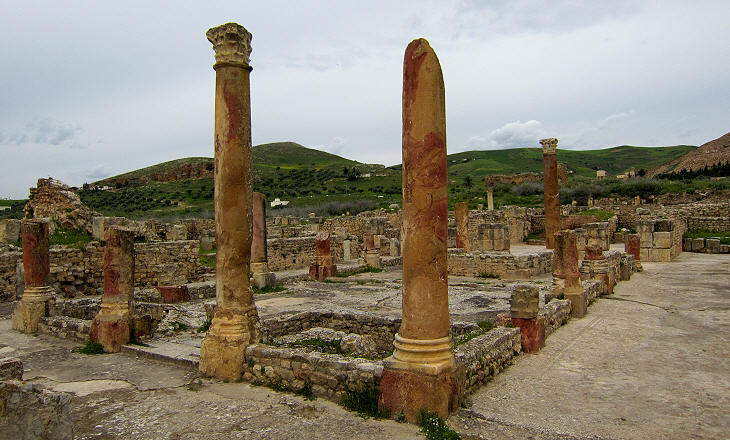 House of the Hunt: main courtyard decorated with columns from Simitthus

Archaeologists have found an insula (a block of adjoining buildings) of richly decorated houses to the north of the Forum of Bulla. Apparently the peristyle of the House of the Hunt (so named after a mosaic depicting hunting scenes) does not appear very different from that of the Waterfall House at Utica. In that house archaeologists found steps leading to the upper floor, the private section of the house. At Bulla instead the steps which were found led underground.

House of the Hunt: (left) peristyle of the lower floor; (right) detail of its mosaics

The generally accepted explanation for building a second storey down instead of up is that the lower rooms enjoyed more pleasant temperatures in summer. There is a town in southern Tunisia which is entirely dug into the ground, but this was done for defence purposes and not as a way for reducing the heat (underground towns in Cappadocia were built for the same reason).
Bulla is located at some 500 ft and although temperatures in summer are very high, they are not higher than in other parts of Tunisia, so archaeologists have thought of other possible explanations without reaching firm conclusions.
The lower floor of the House of the Hunt received air and light from an open courtyard. It was not simply excavated into the ground, but it was built on foundations going further down. 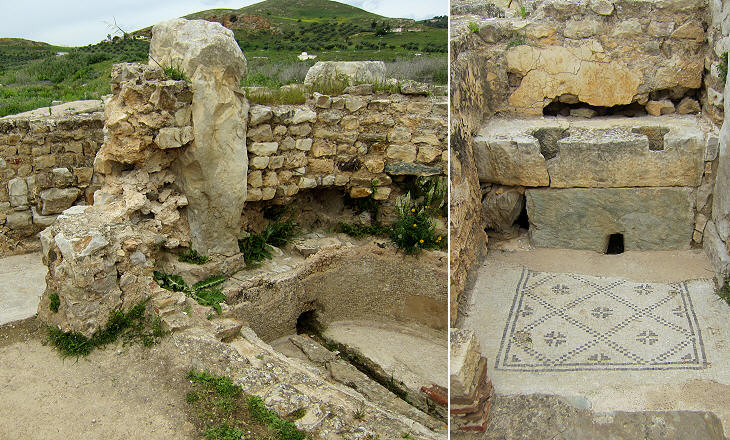 House of the Hunt - "French Bathroom": (left) the bathroom; (right) the toilet which is situated behind the curved wall

When a foreigner asks for the "salle de bain" (bathroom) in a French home he is then puzzled by not finding a toilet there. The owner of House of the Hunt would have been at ease in a French home, because he clearly separated the small bath of his house from the adjoining toilet, a very early example of double W.C. 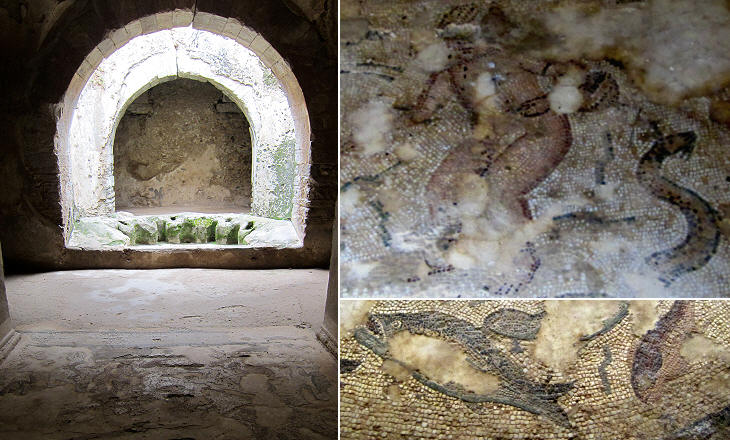 House of the Fisherman: (left) lower floor receiving light from a small courtyard with a fountain; (right) detail of the mosaics which give name to the house 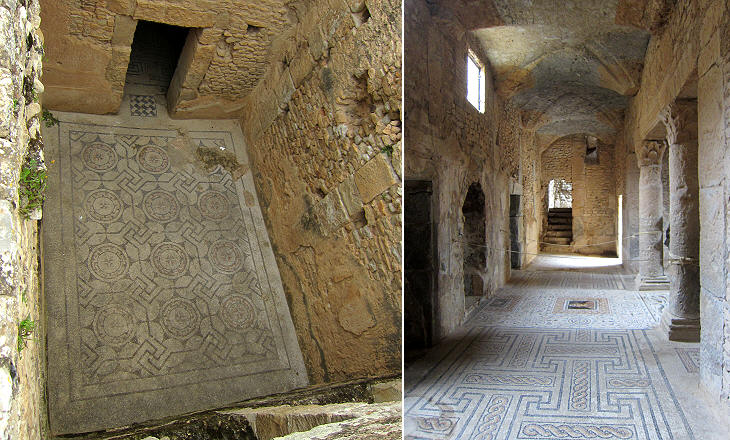 The lower floor of the House of Amphitrite has a different design with a very small inner court open on only one side. Light came mainly from windows opened at the top of a high corridor leading to a triclinium (dining room), two small bedrooms and a kitchen. In addition to the windows in the corridor there were wells for ventilation. 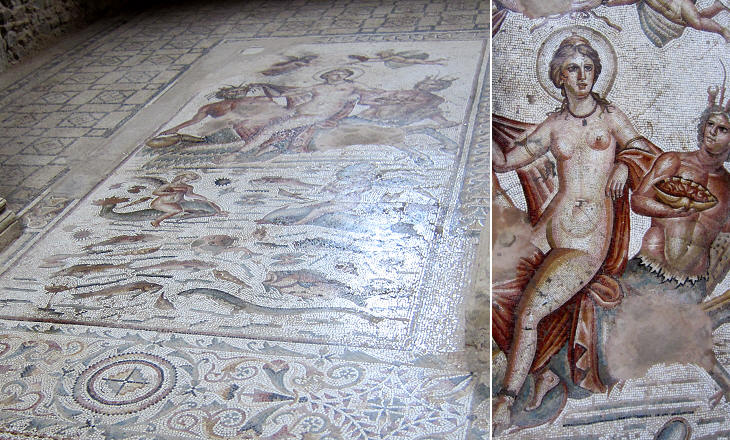 House of Amphitrite: mosaic of the "triclinium"

The house is named after a very fine mosaic which was believed to portray Amphitrite, wife of Neptune, the Roman god of sea. Today the mosaic is believed to depict the Toilet of Venus, because Amphitrite was usually portrayed together with her husband, as in mosaics at the Museum of Bardo and at Herculaneum. St. Augustine, who visited Bulla and reproached its inhabitants for their impious behaviour, would not have approved of this mosaic. 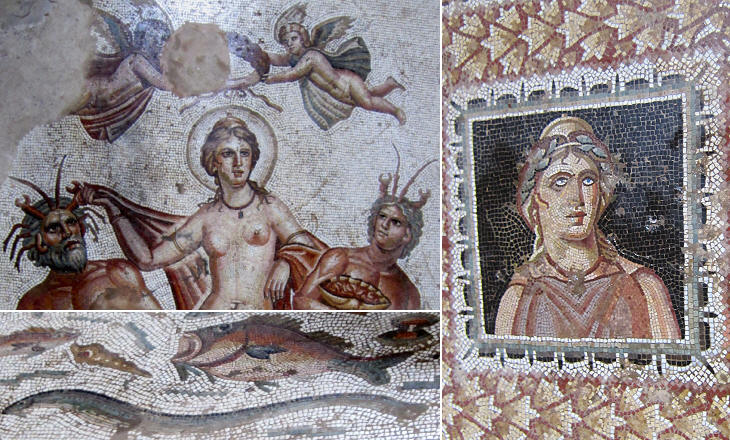 House of Amphitrite: (left) details of the main scene; (right) portrait of a woman in a mosaic in the corridor (when it was found the irises were made with gems which were subsequently stolen)

The houses of the insula date from the IInd to the early IVth century. The detail showing two cupids crowning Venus is very similar to the later depiction of Christian martyrs receiving a palm crown or leaf from an angel (see a page on the depiction of martyrdoms in the churches of Rome). The Toilet of Venus was such a popular subject (see a mosaic at Philippopolis in Syria) that it was not entirely abandoned when references to pagan deities were forbidden (see a mosaic from Sidi Ghrib where a landlady replaced Venus). 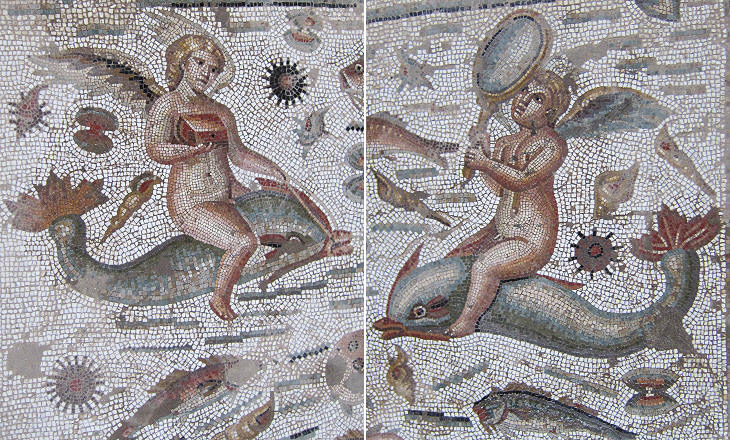 House of Amphitrite: Cupids riding dolphins carrying a box of jewels and a mirror

The design and execution of such a mosaic required talent, not just skill, yet in Roman society the makers of these mosaics were not regarded as artists and usually they did not sign their works. Archaeologists are able to broadly date the mosaics, but have not yet developed a full analysis of their style to identify "schools of mosaic", as those which group Italian Early Renaissance works of unknown painters. 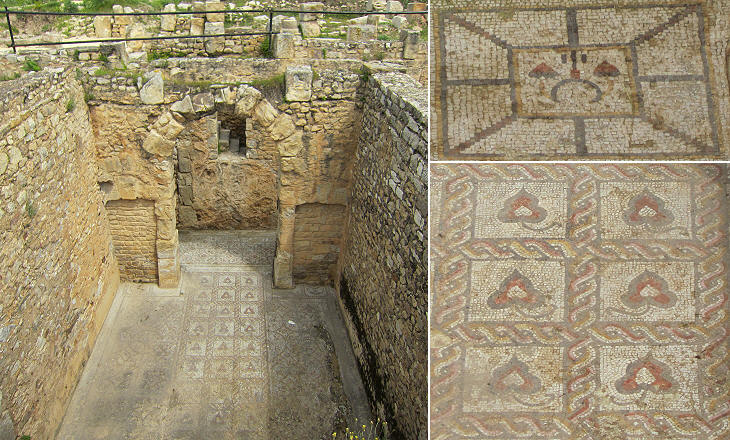 House of the Treasure: one of the lower rooms and details of its mosaics

The lower floor of this house was built in the same way as the House of Amphitrite with three rooms receiving light and air from a corridor. The vaults of the rooms have collapsed. It is named after a coffer which was found by archaeologists; the silver coins it contained are at the Museum of Bardo in Tunis, although visitors to Bulla are approached by local people who claim they have part of the treasure and they are willing to sell it at a bargain. 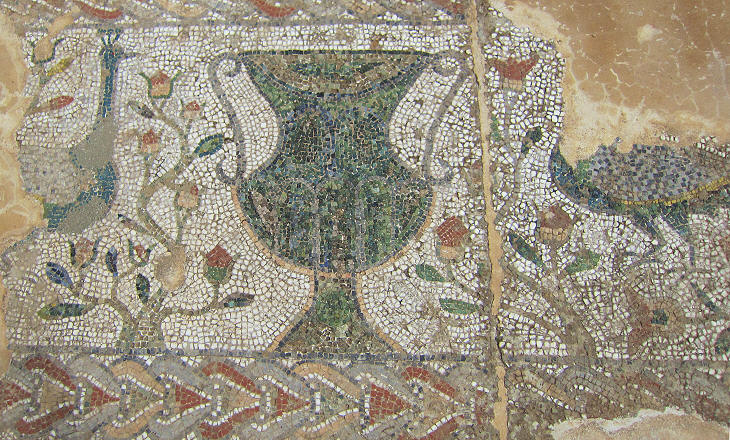 House of the Peacock

Bulla was inhabited until the Arab invasion of the VIIth century and some of its houses were refurbished after the town had become wholly Christian. The mosaics of this period portray symbols of the new faith (peacocks representing Resurrection) with others which were part of the old beliefs, such as a kantharos, a jar which was a symbol of Dionysus and was adopted by Christians as symbol of life. 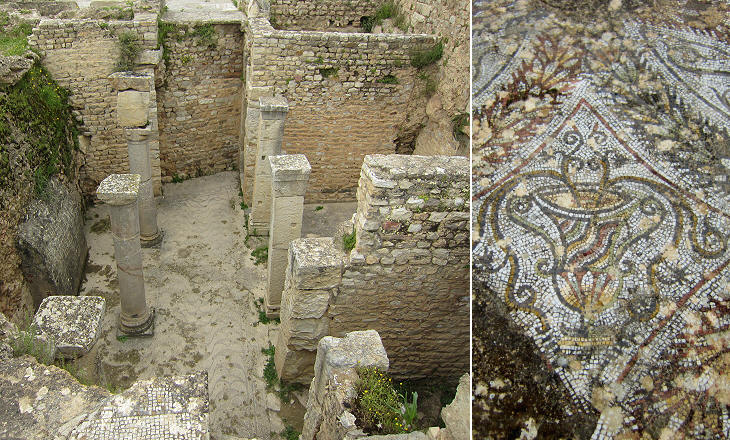 Archaeologists found a house adjoining the House of the Hunt which had mosaics having the same subject. Some of them were damaged because at one point the lower floor was used as a necropolis. 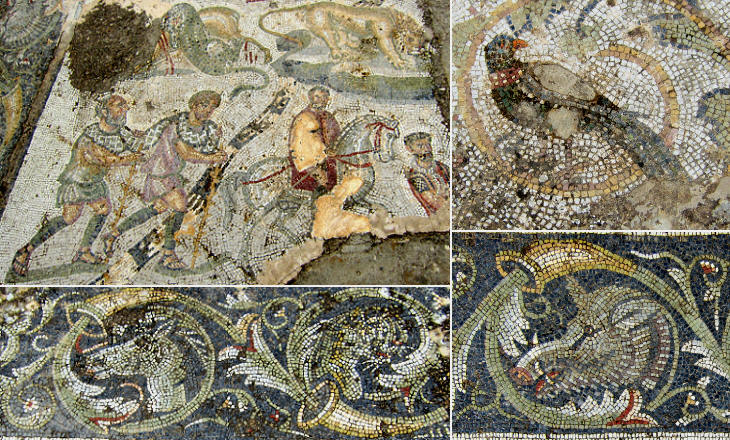 New House of the Hunt - Mosaics

The main mosaic portrays the owner of the house hunting followed by his servants, a subject which appears in Dominus Julius' mosaic too. The scene is surrounded by a beautiful inhabited scroll frame which includes the hare which can be seen in the image used as background for this page. 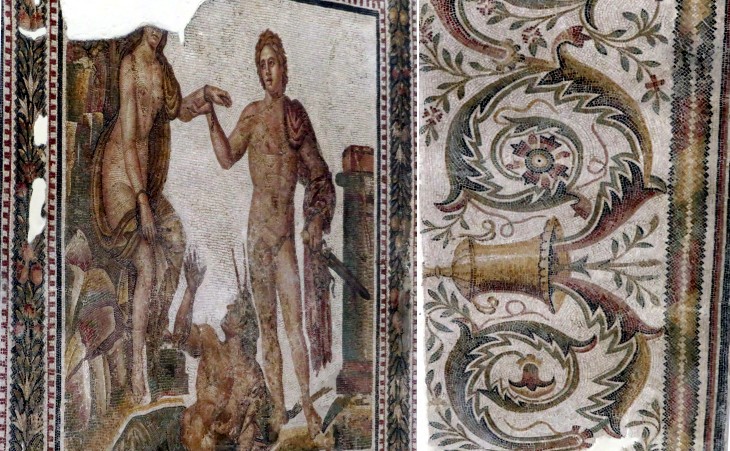