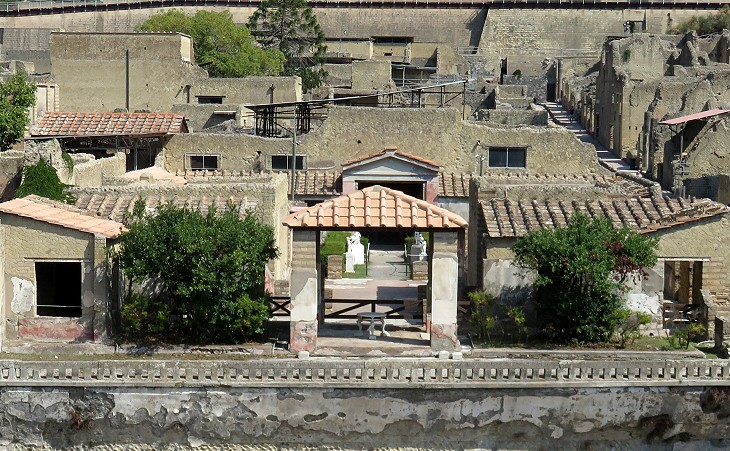 House of the Deer

Apparently only wealthy people lived at Herculaneum. Almost all the houses in the archaeological area are of some size and show signs of decorations. The House of the Deer, thus named after statues of deer attacked by hounds (a popular subject even at Versailles), had a large closed garden on a terrace overlooking the sea. An earthquake occurred in 62 AD and some houses were enlarged by the richest citizens who were able to buy those of their neighbours who did not have enough resources to repair or rebuild them. 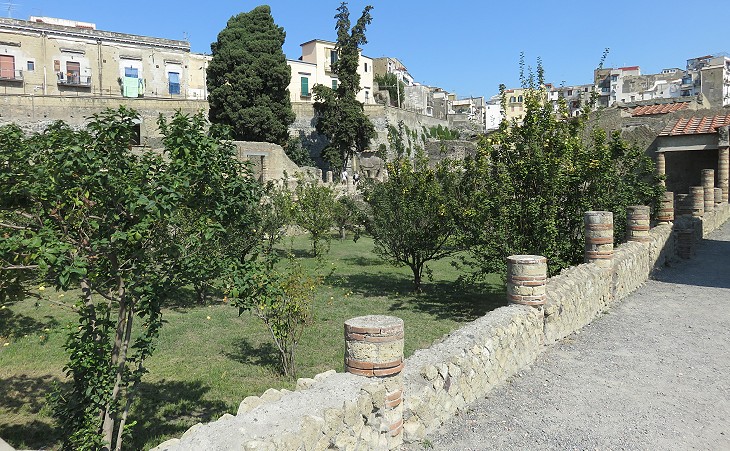 House of the Inn: peristyle with a lemon tree orchard

The very large peristyle of a house with a terrace overlooking the sea, the shape of its rooms and the presence of bath facilities led archaeologists to conclude that it was used as an inn, also because it could be easily reached from one of the harbours of the town. 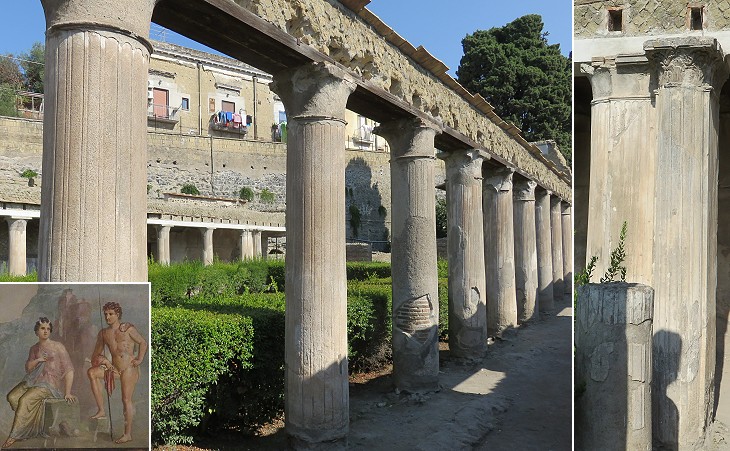 House of Argus: the peristyle and a detail of its columns; (inset) Archaeological Museum of Naples: Io and Argus in a fresco from Pompeii

The main entrance to this house stands on an area of the ancient town which lies under the modern one. The building had a large peristyle which was accessible from a rear entrance and which has been excavated. It was named after a painting portraying Io and Argus. Near this house one can see the entrance to some of the underground passages which were dug in the XVIIIth century. 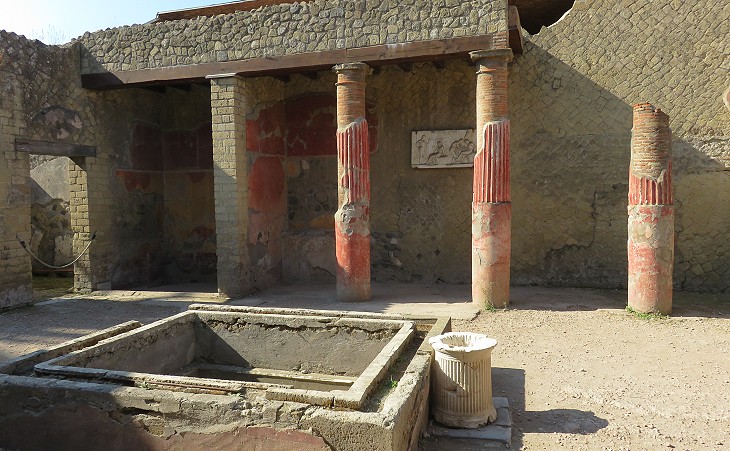 House of the Relief of Telephus: courtyard

This large house shows clear evidence of having been redesigned after the earthquake. Houses and public buildings, e.g. Collegio degli Augustali, were often decorated with paintings and reliefs depicting events of the life of Hercules, the mythical founder of Herculaneum. The only relief at this house which was not shattered to pieces in 79 AD portrays a scene in which Telephus, Hercules' son, is portrayed, but not as a baby as in some famous statues of Hercules. 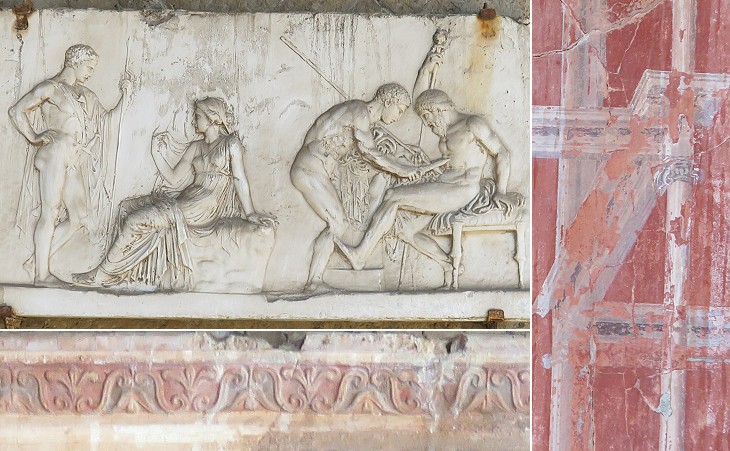 House of the Relief of Telephus: (left-above) relief after which the house is named; (left-below and right) details of the decoration

The relief shows on the left side Achilles consulting the Sibyl of Delphi and on the right side the Greek hero scraping rust from his spear on the wound of Telephus. According to the myth the Greeks mistook the town of which Telephus was king with Troy and attacked it. In the fight Achilles wounded Telephus. Because the wound would not heal, Telephus consulted the Oracle of Delphi and was told that He that wounded shall heal. Eventually Achilles was convinced to scrape rust from his spear on the wound which then healed.
The event and the underlining concept that something can wound and cure at the same time was mentioned by many poets, including Shakespeare: That gold must round engirt these brows of mine, / Whose smile and frown, like to Achilles' spear, / Is able with the change to kill and cure. Henry VI - Part II 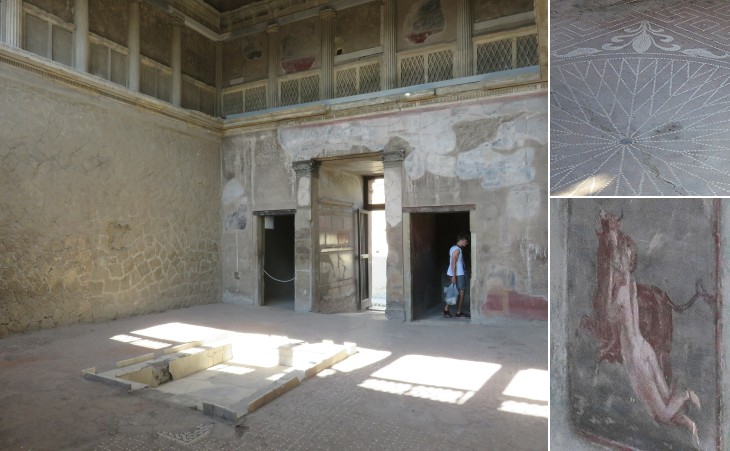 Samnite House: (left) atrium; (right-above) detail of the floor in "cocciopesto"; (right-below) detail of a fresco depicting the Rape of Europa in the room leading to the atrium (in this painting the bull is not white as per the traditional account)

Similar to Pompeii, Herculaneum was founded by Italian tribes and not by Greek settlers as Paestum. It became an important town of the Samnites who opposed the hegemony of Rome over southern Italy. The foundation of this house was dated IInd century BC and the building was therefore called Samnite House. Originally it was larger and it included part of the adjoining House of the Great Portal. 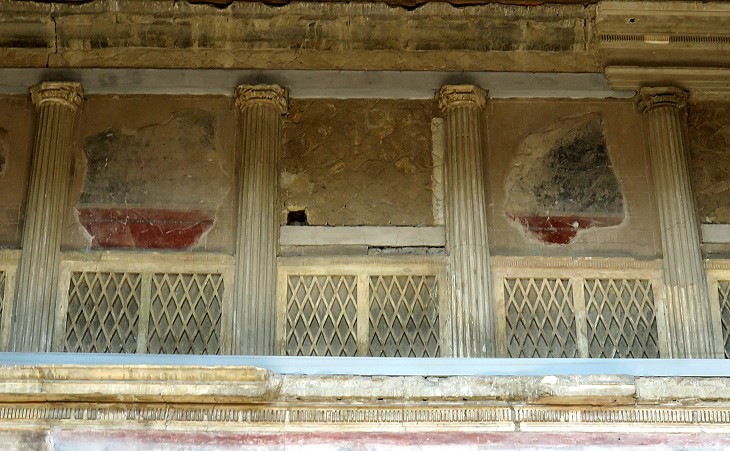 After the 62 AD earthquake the upper storey was repaired, but at the same time it was separated from the house and it was given an independent access from the street via a wooden staircase. In order to aesthetically minimize the impact of the change the top section of the atrium was decorated on three sides by fake stucco columns and balustrades. House of the Great Portal: (left) entrance; (right-above) a winged victory and detail of a fresco; (right-below) another fresco

The brick portal brings to mind similar portals in Ostia and more in general it shows how the Romans were able to use bricks instead of marbles and other expensive stones to create classical architectural details as they did in many funerary monuments. Bricks having the shape of a circular sector were manufactured on purpose for creating columns. 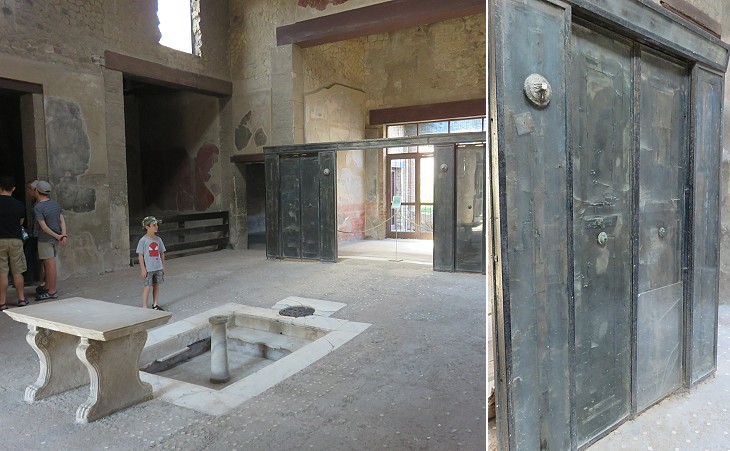 House of the Wooden Partition: (left) the atrium; (right) the wooden partition

The extraordinary circumstances of the sudden end of Herculaneum led to the conservation of some decorative elements or pieces of furniture of the houses, which can rarely be found in other ancient towns. In this house the view of the inner rooms could be prevented by folding wooden panels resembling doors. It is likely that when the landlords received their clientes (i.e. citizens relying on their patronage) or assistants in the atrium, they preferred to protect the privacy of their family by using this partition. 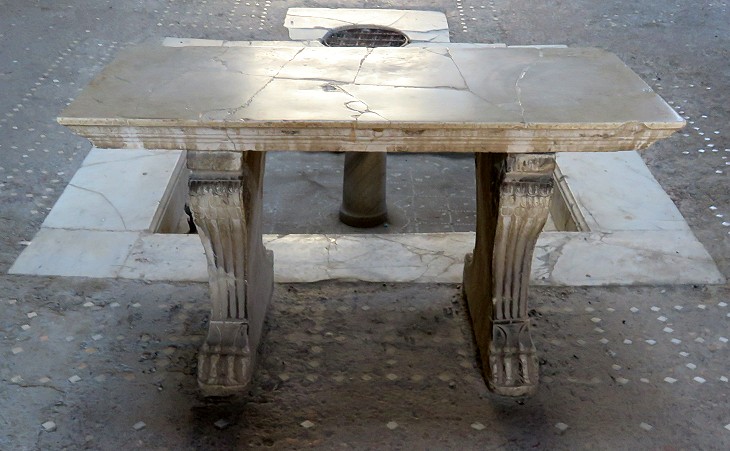 The image shows a cartibulum, a particular kind of table which is frequently seen in the atrium of Roman houses. Its legs usually ended with the depiction of lion paws. In the more elegant specimens the two vertical slabs had the shape of animals, real or fantastic ones as at Casa del Fauno in Pompeii. Eventually these marble tables became very elaborate as the one found at Vigna Casali in Rome. 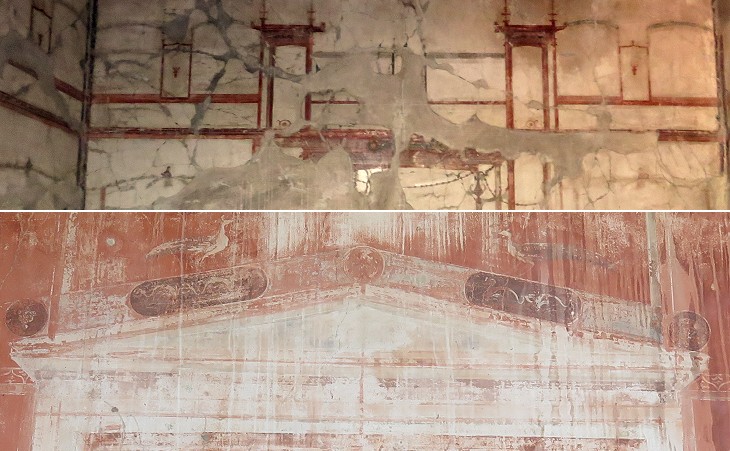 Art historians classified the paintings at Herculaneum and Pompeii into four "styles", the fourth being the most recent one and in general that which prevailed after the 62 earthquake. The third style was characterized by decorative patterns based on candelabra (chandeliers) and fake architectures spread over a large surface. These fake architectures acquired a greater size and more elaborate details in the fourth style. 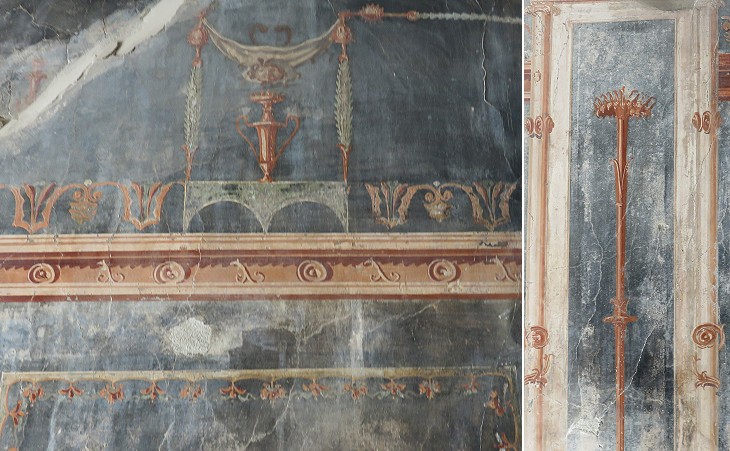 House of the Black Hall: details of the decoration

The use of a black background is classified as typical of the fourth style (see another example in Pompeii), but it can be found also in Roman paintings of the early Ist century AD as at Villa Romana della Farnesina. Pliny the Elder listed the colours which were available to Roman painters (Historia Naturalis - Book XXXV) and he divided them into two categories: floridi (blue, green, some types of red) and austeri in which he included atramentum (black). This pigment could be obtained from a variety of sources and we can assume it was not too expensive, hence its use as background colour for large surfaces. House of the Mosaic Atrium: mosaics, another detail is shown in the image used as background for this page

This is a house with a large garden surrounded on three sides by porticoes. It is named after the elaborate checkerboard floor mosaic which surrounds the impluvium, the sunken part of the atrium where the rainwater coming through the opening in the roof was collected. At Herculaneum black and white floor mosaics were very popular, similar to what was customary in Rome, even in the richest houses, including that of Livia, third wife of Emperor Augustus. 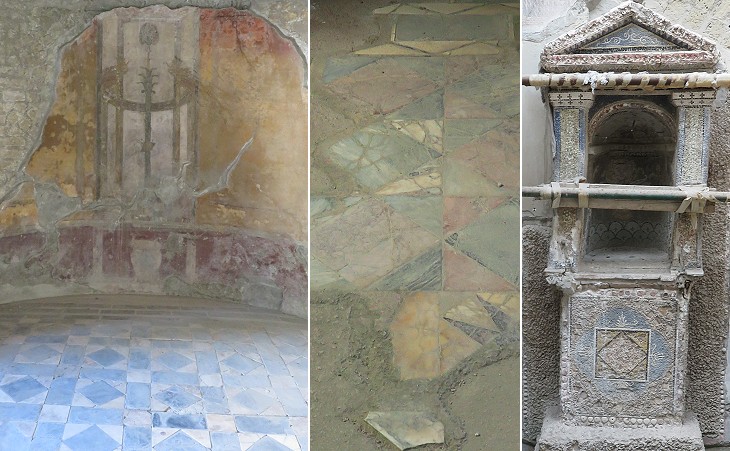 House of the Skeleton: (left) a niche; (centre) marble floor; (right) a "lararium"

The explosions which announced the eruption of Mt. Vesuvius were heard from the inhabitants of Herculaneum, many of whom ran to the seashore in the hope of saving their lives (their skeletons were found in the 1980s). Other inhabitants shut themselves in their homes and they died there either by suffocation or because of the extreme heat of the gases which hit the town. In 1831 a skeleton was found in the upper rooms of this rich house. 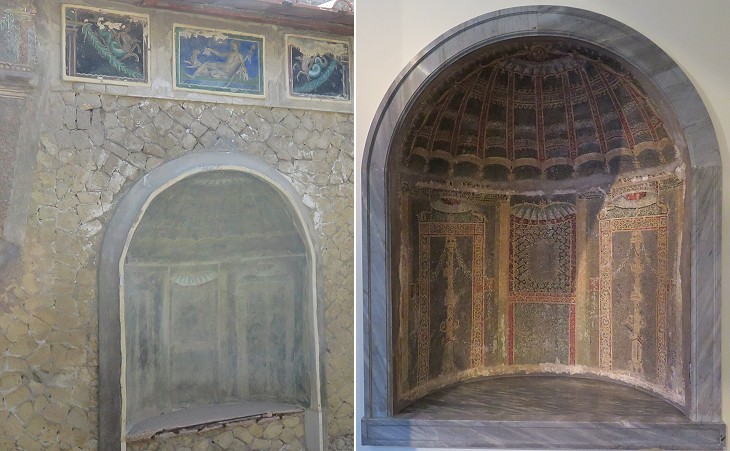 House of the Skeleton: (left) a decorated niche; (right) the original at the Archaeological Museum of Naples

The focus of the first excavations was on finding objects which could be easily taken away. The House of the Skeleton was one of the first to be properly excavated. The new approach was not as destructive as the previous one and it led to the identification and preservation of architectural details and decorations. At that time the approach to the restoration of an ancient work of art was that of bringing it back to its original aspect, so the niche which was found in this house looks like it was made yesterday and not 2,000 years ago.

House of Neptune and Amphitrite: wall mosaic in the summer "triclinium" (dining room)

The house is named after a glass paste mosaic depicting Neptune and Amphitrite, his wife, which decorates an open air triclinium (dining room). The subject was very popular throughout the whole Roman Empire, but it was usually depicted in large floor mosaics, as at Utica. This small mosaic is impressive for the elaborate decoration which frames the statue-like images of the two gods. It shows the very rich colour palette which mosaic makers could use. 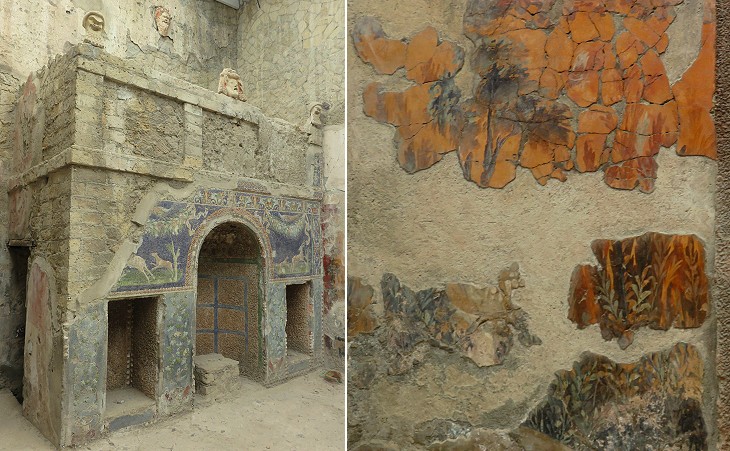 House of Neptune and Amphitrite: (left) nymphaeum (decorated fountain); (right) detail of the fresco at the side of the mosaic

The decoration of the summer triclinium was completed by a small nymphaeum with theatrical masks and by frescoes depicting a garden, another popular subject of Roman painting which is very frequently seen at Villa di Poppea at Oplontis, which also was destroyed by the eruption of Mount Vesuvius. 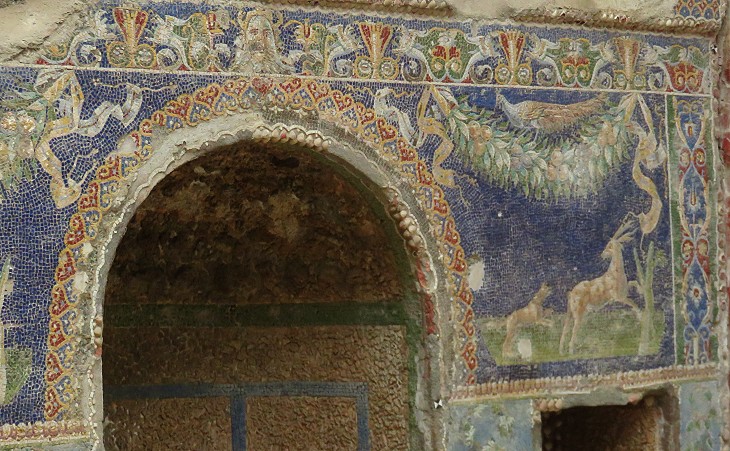 House of Neptune and Amphitrite: detail of the nymphaeum

In addition to the glass paste mosaic the nymphaeum was decorated with shells and lava foam, known as tartar because it resembles the incrustations formed by acid potassium tartrate on the sides of casks after the fermentation of wine. These two elements are often found in artificial Renaissance grottoes e.g. at Villa d'Este and Giardino di Boboli and they most likely decorated Ninfeo di Egeria, a famous ancient Roman artificial cave. 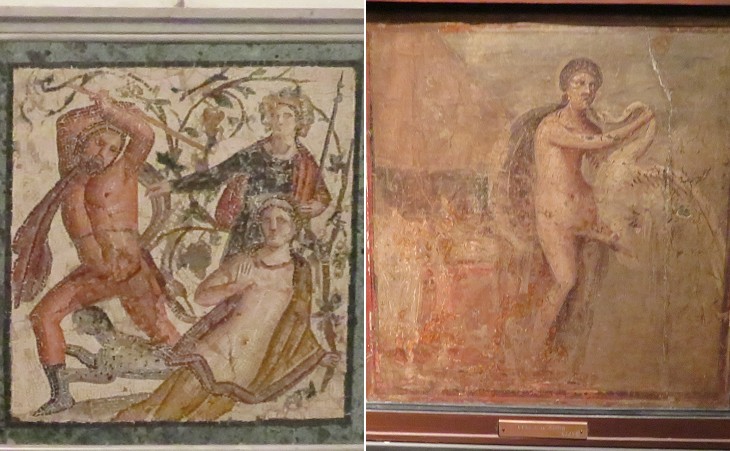 Archaeological Museum of Naples: (left) mosaic depicting Lycurgus, Ambrosia and Dionysus; (right) fresco portraying Leda and the Swan (both from houses of Herculaneum)