- Economy
(detail of a fresco at House of the Orchard) 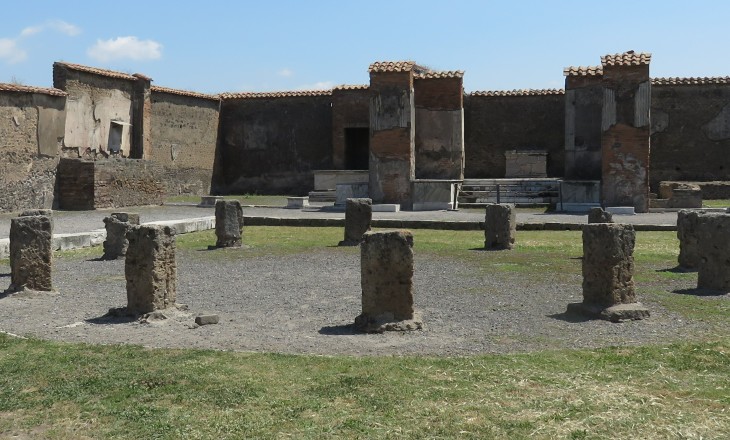 The Macellum was the main marketplace of Pompeii (today Italian macello means slaughterhouse, but è un macello! means "it's a mess!"). It was a square portico with stalls for the sale of fish and meat at the sides of a small "temple" which housed a statue of the emperor. These stalls had racks which could be easily washed. Activities at the Macellum were under the vigilance of ediles, municipal officers who inspected the measurement instruments used by the vendors and the quality of the goods sold. When appropriate they could fine the vendors and confiscate their merchandise.
It was decorated with paintings and marbles (the image used as background for this page shows some of its marble mouldings). You may wish to see similar facilities at Thamugadi in Algeria, Leptis Magna in Libya and Gerasa in Jordan. 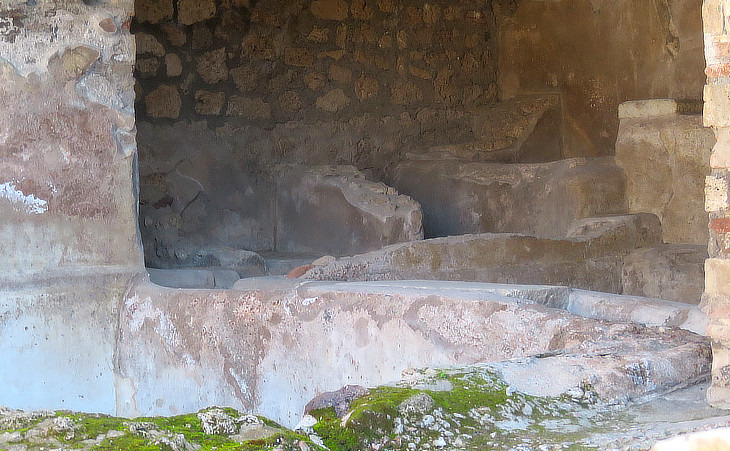 Fullery of Stephanus: basins for the cleaning and dyeing of wool clothes (see a similar establishment at Ostia)

Pompeii was renowned for its wool industry, an activity which one would not expect to find in a location by the sea, but the town was founded by Italic tribes living in the mountains who practiced sheep husbandry. All the many processes of this business, including dyeing and finishing the woven products, were performed in the town. Old wool clothes were recycled (you may wish to see fullers in action in a fresco found at Pompeii - it opens in another window). 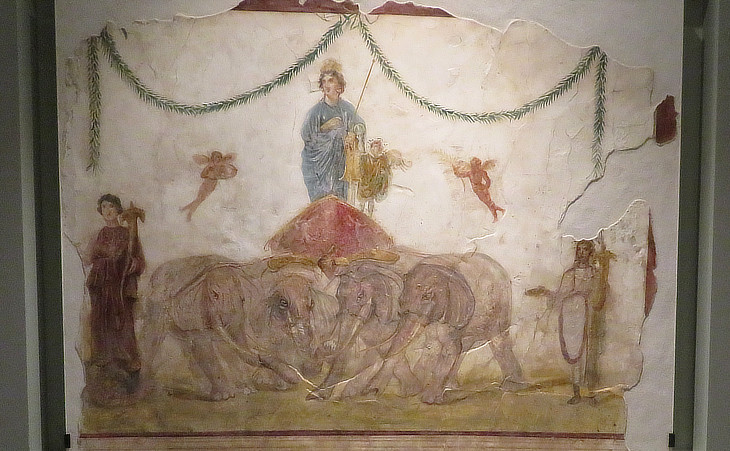 Workshop of Verecundus: fresco depicting Venus on a chariot drawn by elephants (rather than swans)

I do not intend to treat here of the whole art of the Roman fullers, which belongs rather to the history of weaving or manufacturing cloth in general; but I hope I shall be forgiven if I add the few following observations. The fullers received the cloth as it came from the loom in order that it might be scoured, walked and smoothed. It was walked by being stamped upon with the feet. The rough wool raised by this operation was combed off, partly with the skin of a hedge hog, and partly with the tops of some plants of the thistle kind, in order to give the cloth a nap. (..) The whole process of smoothing seems to have consisted in making the wool or nap lie as evenly as possible one way which certainly must have given to the cloth a much better appearance. As cloth, at present, is more dressed and shorn on one side than another, the ancient fullers prepared theirs in the like manner, so that clothes could be turned, after the inside of them had been new dressed. Whether they made felt also I have not yet inquired, but I conjecture that the manufacturing of it was the occupation of those called lanarii, coactores, and coactilarii.
Johann Beckmann - A History of Inventions and Discoveries - 1817 English translation
A small inscription indicates that the fresco was dedicated to Venus by the coactilarii (felt workers). (left) Basilica of Eumachia seen from the Forum and fragment of a large inscription; (centre) frieze of the portal; (right) statue of Eumachia paid by the "fullones"

Crypto-Porticus of Eumachia (1821), a building of large size in the form of a basilica, supposed to have been the Exchange of the cloth merchants. It had two entrances, one from the Street of Abundance, the other from the Forum. The latter had a noble portico of 18 columns; the grand entrance in the centre was closed by folding doors, of which the sockets and bolt holes are still visible in the marble. This was bordered by raised platforms, for the purpose, probably, of haranguing the people. The interior was divided into a large area surrounded by a double gallery, a peristyle of 48 columns of Parian marble of beautiful workmanship, very few of which have been found. (..) In a niche in the centre of the wall in the crypto-porticus, stood the statue of Eumachia the priestess, with an inscription recording that it was erected by the dyers to Eumachia, the public priestess. On the architrave over the side entrance is another inscription, recording the erection of the building by Eumachia. (..) This is a repetition of a much larger inscription which was affixed to the front of the building, but was found on the ground broken into fragments.
John Murray - Handbook for Travellers in Southern Italy - 1853
Eumachia was a priestess who was regarded as a patron of this industry and the basilica dedicated to her was most likely the wool market. She is mentioned also in a large tomb outside Porta Nocera. The location of the basilica in the Forum testifies to the importance of the wool industry of Pompeii. 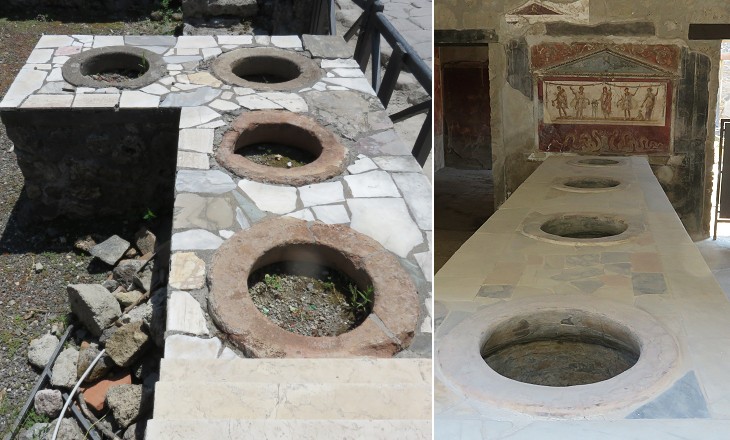 Two "thermopolia" (that on the right belonged to Lucius Vetutius Placidus, see its painting)

These shops were always open to the streets, like those we see in the older quarters of Italian towns at the present day. (..) The Shops were very small and mean in appearance and were all of one character, having the business part in front and one or two little chambers behind. A few only of the better class appeared to have had any second floor, and of that there is no other evidence than the occasional occurrence of a ruined staircase. The shop was open to the street, like those of modern Italy, and was closed at night by sliding shutters. In front it had a broad counter of masonry, with three little steps at the end next the wall for the display of the goods, and a small oven in the opposite end, where the articles sold were for consumption as food or drink. When first excavated, many of the shops had the names of their owners written over them, mostly in red paint. Others had signs in terra cotta, to denote the trade which was carried on within them. Murray
Fast food is not a modern invention because many small taverns at Pompeii and Herculaneum sold food and beverages to passers-by. We can assume they mainly operated at lunchtime when public buildings and markets were open. Their customers came from other towns or just did not have time to go home and have lunch. A more elaborate thermopolium with an inner garden has been found at Ostia. The word means "sale of hot (food)". 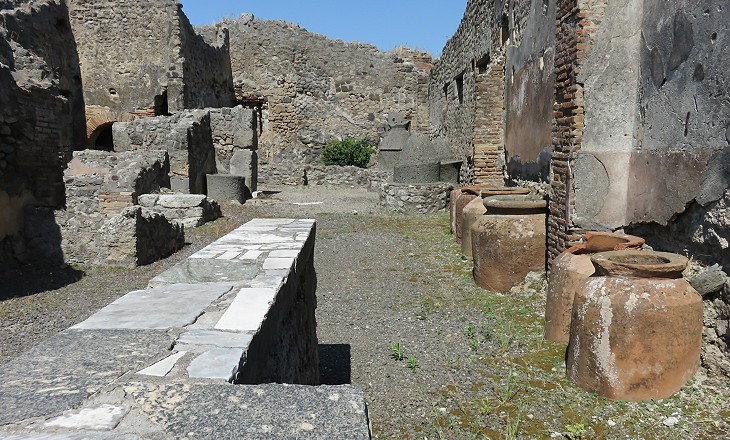 A large "thermopolium" near the Forum with grindstones and big jars

89 thermopolia have been identified at Pompeii and they have provided archaeologists with an incredible number of small coins. 1385 coins were found at the Thermopolium of Lucius Vetitius Placidus inside a jar. Other coins were hidden elsewhere. The majority of them were asses, the smallest value Roman coins. The small treasure of Vetutius Placidus shows that, similar to what occurs today, shopkeepers were not as poor as they pretended to be. From an inscription lately dug up, I find that the Pompeians had places of public entertainment, not unlike the modern ones in the suburbs of London and Paris. "IN PROEDIS IVLIAE S P F FELICIS LOCANTVR BALNEVM VENERIVM ET NONGENTVM. TABERNAE PERGVLAE COENACVLA EX IDIBVS AVG PRIMIS IN IDVS AVG SEXTAS" By this advertisement it seems that the mistress reserved to herself the possession of the premises for a few days in August or let them only for a year, wanting six days.
Henry Swinburne - Travels in the Two Sicilies - 1777-1780
The public bath establishment with adjoining shops and apartments which Giulia Felix wanted to rent for a period of five years (as clarified by a more correct interpretation of the advertisement) was the first which was unearthed at Pompeii. She had restored her property after the 62 earthquake and she decided to use its side along Via dell'Abbondanza, the main decumanus, to invest in rents. 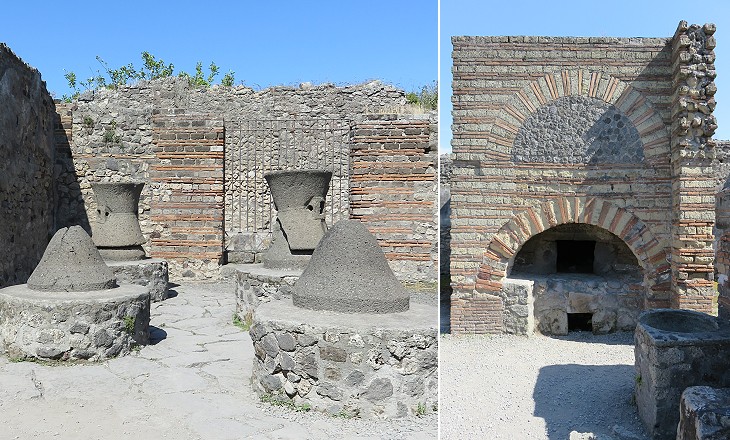 This large bakery did not have a section for direct sales so it is believed it supplied thermopolia and street sellers. The millstones are of the same type as those found at Ostia and at many other locations throughout the Roman Empire (e.g. Mamfis in Israel). Their hard volcanic stone did not lose small particles into the flour which could end up in the loaves of bread. Bread was introduced in Rome by Greek bakers in the IInd century BC. Before that time flour was used by the Romans to prepare puls, a sort of soup with mashed legumes. 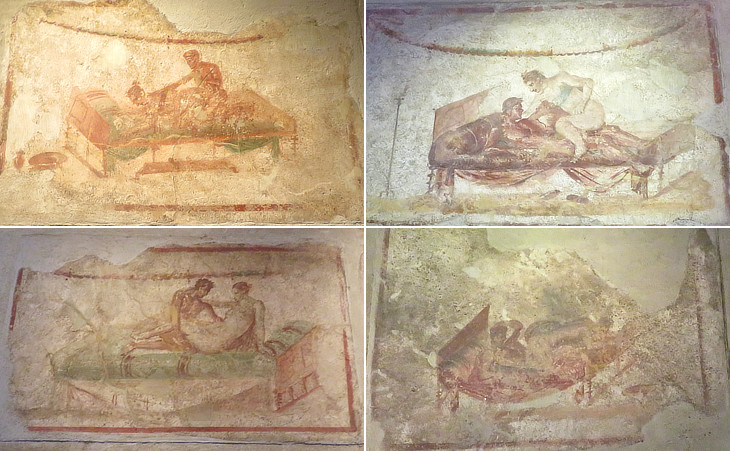 The interior is divided off into small cells or chambers, with a stone couch in each; on the walls are numerous graffiti or scratched inscriptions, which, as well as the paintings over the entrances, of a most licentious description, leave no doubt as to the destination of this resort of Pompeian immorality. It is kept closed, but the guide holds the key (1864).
John Murray - Handbook for Travellers in Southern Italy - 1883
Passengers of large cruise ships calling at Naples are offered tours of Pompeii. The visit lasts a couple of hours. Participants can be as many as 2,000 and are divided into 30/40 groups. Notwithstanding the limited time they gladly queue to see a small brothel near Terme Stabiane and houses decorated with paintings or statues of Priapus. The latter in no way indicated the ill reputation of the ladies who lived inside, but had an apotropaic purpose, i.e. to avert evil or to be a symbol of abundance.
Pompeii did not live off prostitution as did some large ports such as Delos and Corinth. 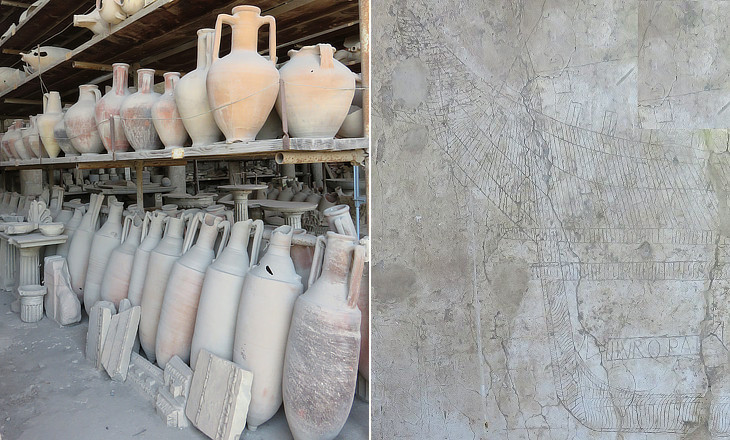 (left) Jars for transportation of oil and wine; (right) House of the Ship Europa

Another liquid of a very exquisite nature, is that known as "garum"; it is prepared from the intestines of fish and various parts which would otherwise be thrown away, macerated in salt; so that it is, in fact, the result of their putrefaction. (..) For the production of garum, Clazomenae is also famed, Pompeii, too, and Leptis (Minor).
Pliny the Elder - Historia Naturalis - Book 3 - Translation by John Bostock and Henry Thomas Riley
Amphorae, jars with two handles, were used for a wide range of goods, and analysis of their contents provides data about the nature, range, and scale of trade at Pompeii. Smaller jars (urcei) were used for garum. Very often jars were stamped with the name of the maker. Based on the number of jars made in Pompeii which were found in other locations, it appears that the town exported its products to other parts of Italy, to Gallia Narbonensis (Southern France) and to the Eastern Mediterranean provinces.
It is likely that the landlord of the House of the Ship Europa was a shipowner. The outline of the ship was incised on a wall perhaps to be painted at a later time. The name of the ship refers to the Phoenician girl abducted by Jupiter disguised as a white bull and carried to Crete. Perhaps the ship was so named because it travelled as far as Phoenicia. The depiction of a ship at sail on the tomb of C. Munatius Faustus suggests he was another shipowner. 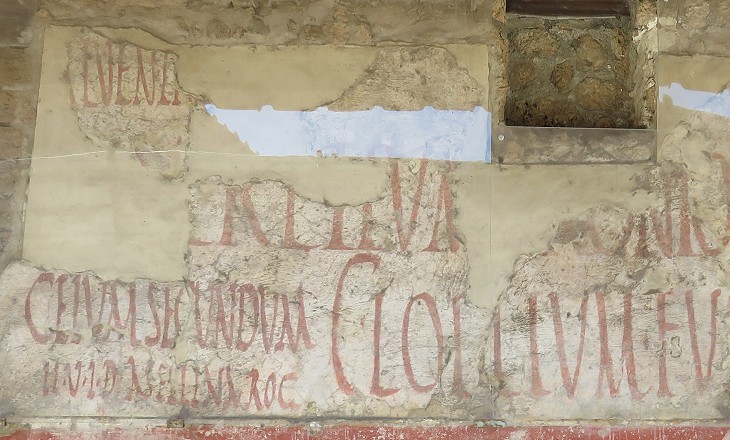 Positions in the administration of Pompeii were unpaid; neverthless the town was covered by electoral graffiti supporting candidates. Campaigns were expensive as dinners were offered and candidates committed themselves to improve public buildings. Was all this effort made just for a bisellium, a folding chair at the theatre? It is a question which applies to today's politicians as well, who say they do it for the people.

Move to:
The Town
Temples and Religion
Public Buildings near the Forum
Other Public Buildings
Houses
Paintings
Other Works of Art
Tombs
Villa di Poppea at Oplontis