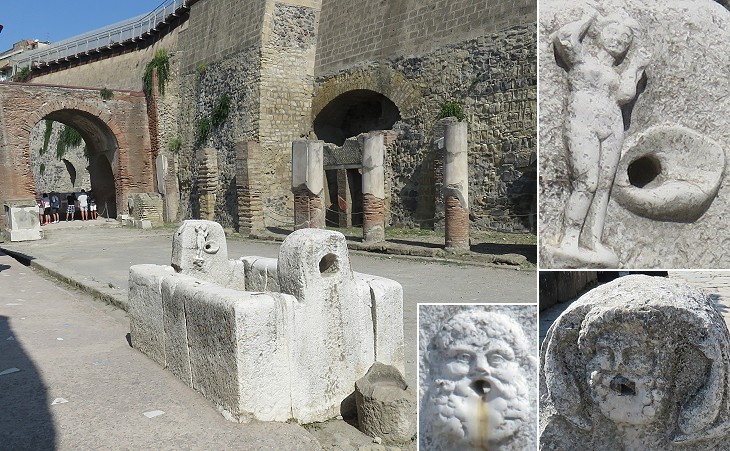 Fountain of Decumanus Maximus and spouts of other fountains

Herculaneum was supplied with water by a branch of an aqueduct built for the city of Naples at the time of Emperor Augustus. Public fountains, very similar to those of Pompeii, distributed the water throughout the town and fistulae, lead pipes, carried it to the richest houses which had their own fountain, often in the form of a decorated nymphaeum. 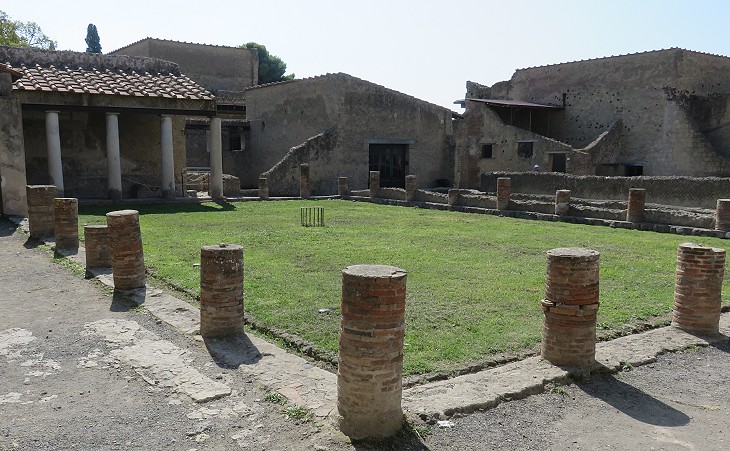 Prior to the construction of the aqueduct wells were dug to find water and archaeologists found a large and deep well in these baths which were built in the second half of the Ist century BC. They had separate sections for men and women; the former could also exercise in a large courtyard. They were located at a short distance from Decumanus Maximus, the main east-west street of Herculaneum, hence they were named Central Baths to distinguish them from the Suburban Baths which were built near the harbour, outside the city walls, after the completion of the aqueduct. 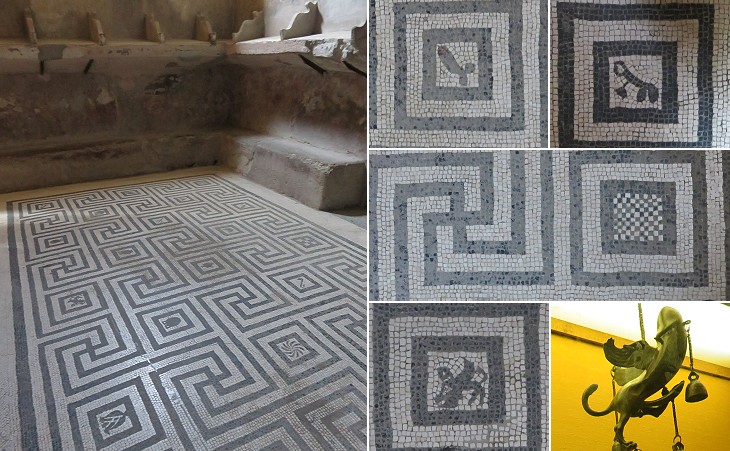 Central Baths: women's section: (left) hall with shelves for storing garments and a floor mosaic with a maze-like pattern; (right) details of the floor and a lamp from Pompeii at the Archaeological Museum of Naples Both sections have a floor mosaic depicting a triton surrounded by other sea creatures; that in the women's section was executed in a finer way; you can see the head of the triton in the men's section in the image used as background for this page. Similar black and white floor mosaics can be seen at baths in Ostia. 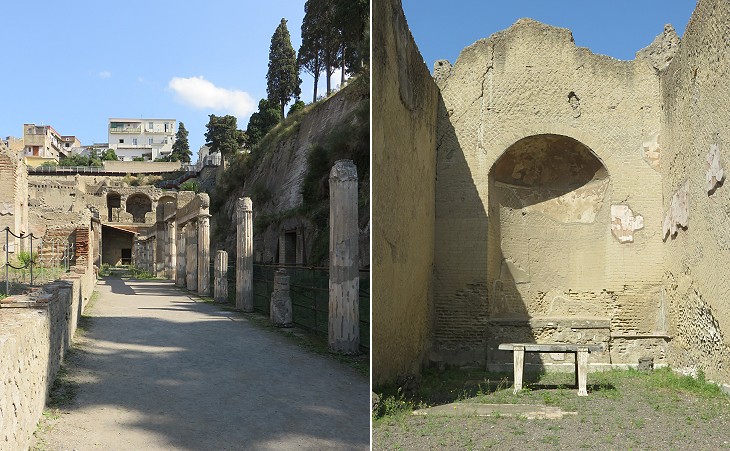 Palaestra: (left) western side of the portico which surrounded a large courtyard/terrace; (right) apsidal hall

Initially some columns and walls of the complex were thought to belong to a temple. When the western section of the palaestra was fully excavated the purpose of the building was properly understood. Its main part is underground (beneath the street which leads from the old entrance to the archaeological area to the new one) and it was explored by digging passages. A large pool or perhaps a fish-breeding pond stood at the centre of the courtyard. The complex is dated late Ist century AD, similar to that at Pompeii, but the design of the pool/pond was modified afterwards. 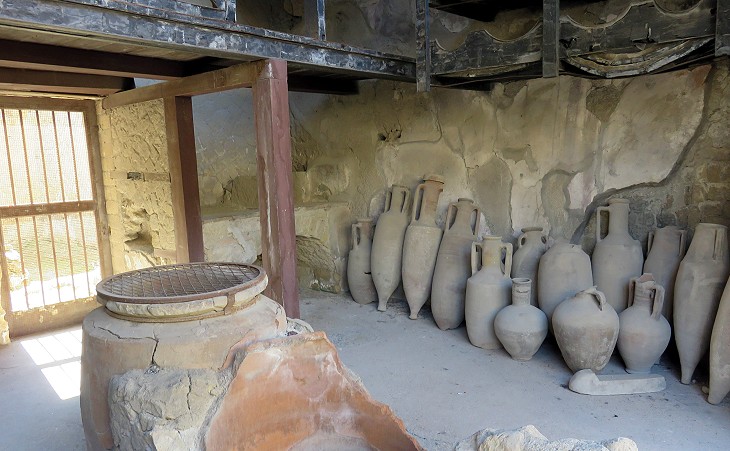 Shop adjoining the House of Neptune and Amphitrite

Some of the richest mansions had their private shops communicating with the interior, in which the proprietor evidently sold the agricultural produce of his farms.
John Murray - Handbook for Travellers in Southern Italy - 1853
The owners of a richly decorated house opened a grocery store in a separate section of the building. It retains an upper wood structure where amphorae could be placed. Some of them contained wine whereas large jars (dolia) were used to store chickpeas and broad beans, which both had an important role in the diet of the ancient Romans because of their protein contents. 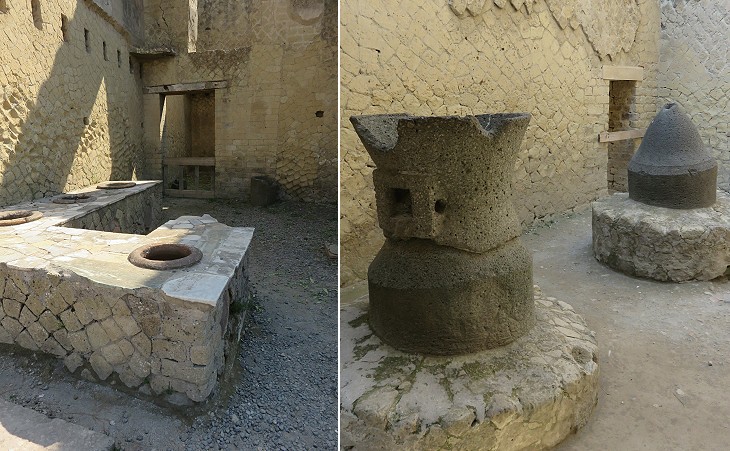 Archaeologists found many shops along the northern section of Cardo V, the widest of the three cardi which have been uncovered. Two of the shops were bakeries, but rather small ones when compared to those at Pompeii and Ostia. Many households of Herculaneum were equipped with manual millstones so most families made bread at home. In this bakery 25 round bronze baking pans were found; they were used to make placenta, a flat dough, after which the human organ is named. 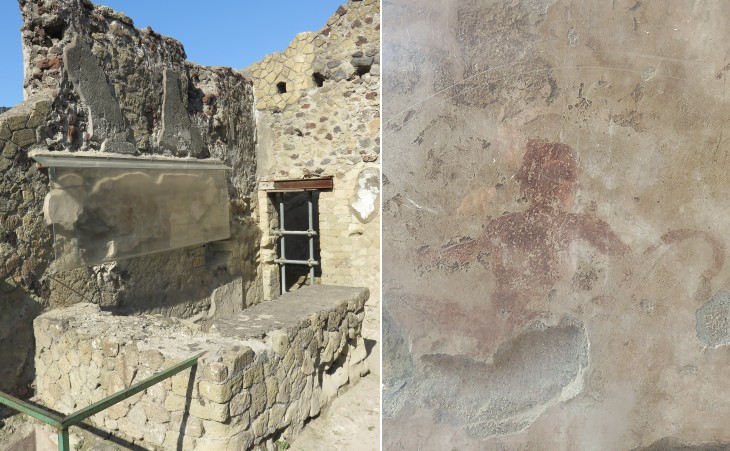 (left) Tavern of Priapus on Cardo V; (right) small painting depicting the fertility god, after which it is named

Cardo V is very near the palaestra and the men who exercised there were most likely good customers of the many food shops which were situated in this street. In this tavern one of the jars contained walnuts. Fried chickpeas were served together with walnuts.
Nature, has conferred upon this nut a peculiar honour, in protecting it with a two-fold covering, the first of which forms a hollowed cushion for it to rest upon, and the second is a woody shell. It is for this reason that this fruit has been looked upon as a symbol consecrated to marriage, its offspring being thus protected in such manifold ways.
Pliny the Elder - Historia Naturalis - Book XV - translation by John Bostock and H.T. Riley 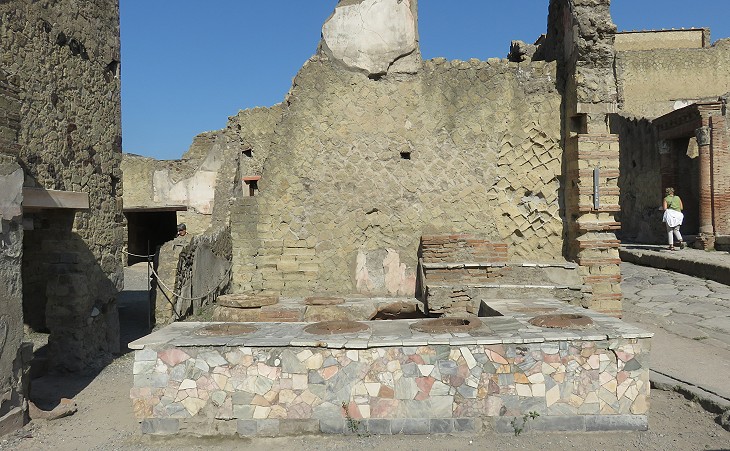 Great "Thermopolium" at the corner between Cardo V and Decumanus Inferior

You may wish to see similar food establishments at Ostia and Pompeii.