You may wish to read a page on the town first or on the public buildings near the Forum. 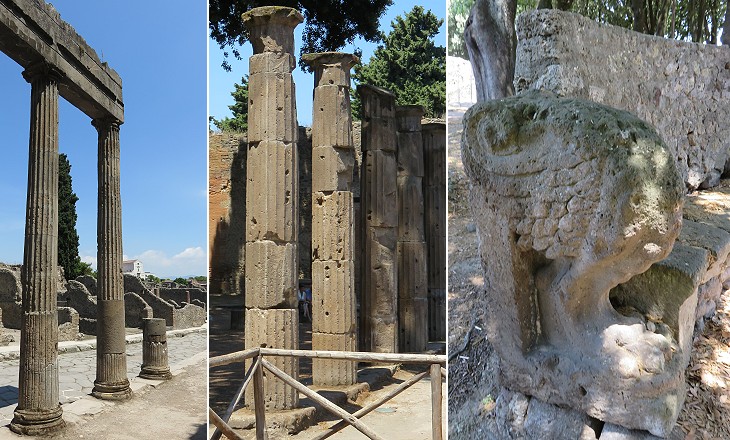 Near the city wall at this angle lie the fragments of a temple of the old Doric order, monuments of much higher antiquity than the rest of the town. I suppose they were part of some fabric thrown down by an earthquake previous to the eruption.
Henry Swinburne - Travels in the Two Sicilies. 1777-1780
This part of Pompeii was excavated in the late XVIIIth century. The Triangular Forum was situated on the southern edge of the terrace upon which the town stood. Its unusual shape was determined by that of the ground. It was preceded by a portico with high Doric columns. It was built in the late IInd century BC at the same time as the adjoining theatre. It included a small temple perhaps dedicated to Minerva and Hercules. 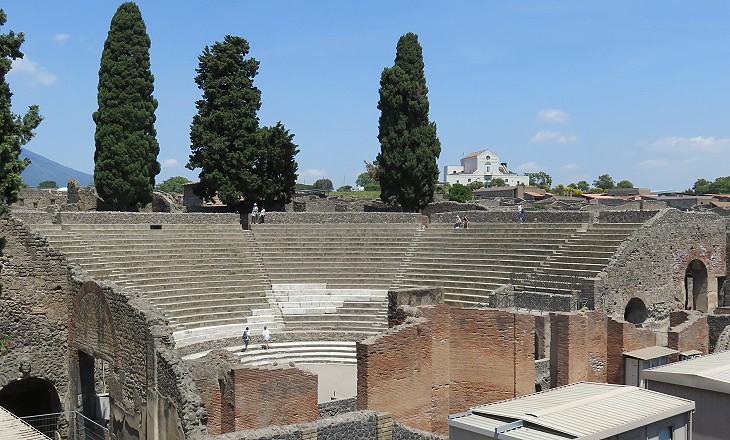 A visit to the theatre elicited some grim thoughts in Mark Twain: I entered the theatre, and sat down in one of the long rows of stone benches in the dress circle, and looked at the place for the orchestra, and the ruined stage, and around at the wide sweep of empty boxes, and thought to myself, "This house won't pay." I tried to imagine the music in full blast, the leader of the orchestra beating time, and the "versatile" So-and-So (who had "just returned from a most successful tour in the provinces to play his last and farewell engagement of positively six nights only, in Pompeii, previous to his departure for Herculaneum,") charging around the stage and piling the agony mountains high - but I could not do it with such a "house" as that; those empty benches tied my fancy down to dull reality. I said, these people that ought to be here have been dead, and still, and moldering to dust for ages and ages, and will never care for the trifles and follies of life any more for ever - "Owing to circumstances, etc., etc., there will not be any performance to-night." Close down the curtain. Put out the lights.
Mark Twain - The Innocents Abroad - 1869. Large Theatre: (left) view from the top; (right) steps for the "bisella"

The theatre was built in the IInd century BC in part exploiting the slope of a small elevation of the ground. It was enlarged in the Ist century AD and it held an audience of 5,000. The decurions (members of a sort of local Senate) and other important citizens of the town sat on bisella, folding chairs placed on the first four steps. It was regarded as such a prestigious recognition that many of those who were entitled to a bisellium placed a reference to it on their tombs. 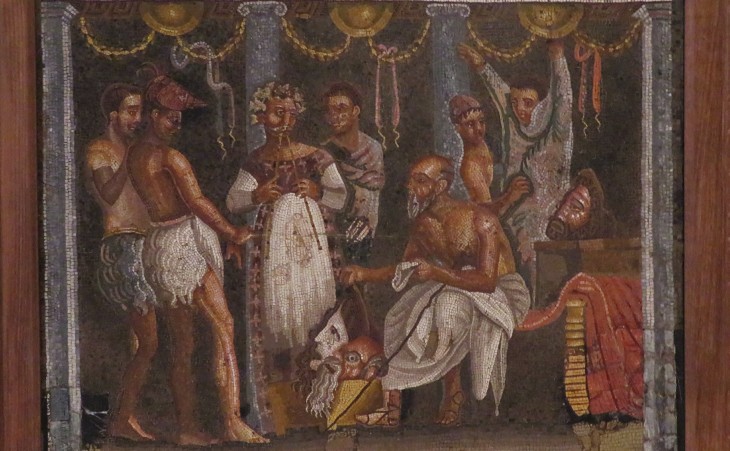 Archaeological Museum of Naples: mosaic from the House of the Tragic Poet depicting a "dominus gregis" (master of the flock), a theatrical entrepreneur surrounded by dancers, music players and other entertainers

Based on mosaics and paintings representing theatrical subjects found at Pompeii, archaeologists believe the season was mainly based on comedies, farces in the local dialect, and mime and dance performances, all played by men wearing theatrical masks. 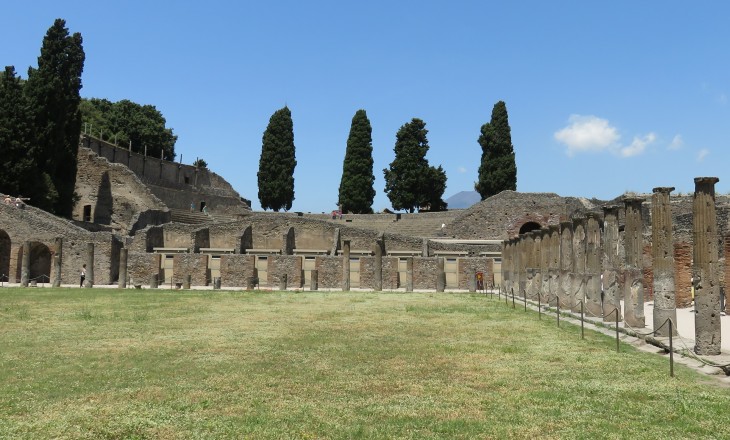 Palaestra of the Gladiators near the Large Theatre

The entrance of Pompeii is near the quadrangular barracks of the Roman cohorts that composed the garrison; a portico runs round the court supported by pillars of stone covered with stucco and painted. The soldiers, in their idle hours, amused themselves with drawing figures of fencers and wrestlers, and in writing their names upon the plaster, the letters are very long and closely joined together (similar to what can be noticed at House of the Lovers). The present silence and ruinous state of these barracks gave me an idea of a town surrendered after a long siege; I could hardly persuade myself that what I saw had been buried and undisturbed for one thousand seven hundred years. The troops seem to have been accommodated with every convenience and even luxury, for they had both a theatre and an amphitheatre belonging to their quarters. Swinburne
This large square portico was a sort of foyer where the audience could stroll before or after performances or shelter during a sudden thunderstorm. After the earthquake which struck Pompeii in 62 AD it was used by gladiators for practicing, most likely because the Great Palaestra near the Amphitheatre had been too damaged to be used. Pompeii was one of the towns which rebelled against Rome in the 91-88 BC "Social War". It was punished by being forced to accept settlers from Rome and towns loyal to Rome who were given control of the local political scene. It was perhaps to meet the more refined tastes of the new settlers that a small covered theatre was built to house musical performances and poetry readings/contests. The decoration of this building includes eagles, the symbol of Rome, and sileni, followers of Dionysus, named after Silenus, the tutor of the god who is often portrayed in theatres, e.g. at Athens and Arles. 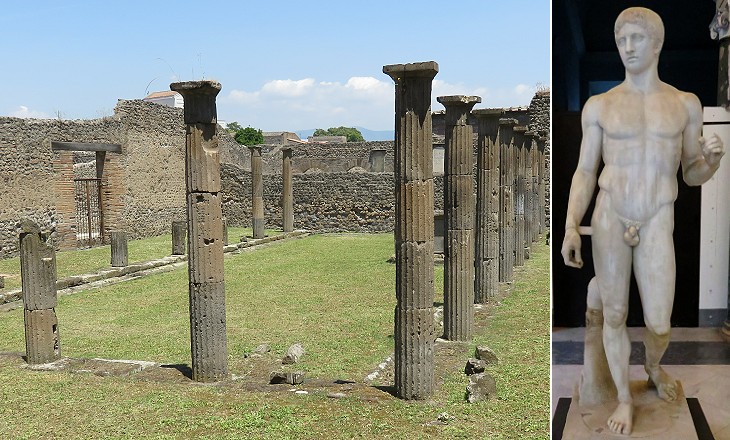 (left) Palaestra Sannitica (IInd century BC); (right) Archaeological Museum of Naples: Doryphoros (spear-bearer) found in the building (copy of a Vth century BC bronze statue by Polykleitos); the posture of the legs is almost the same as that of Augusto di Prima Porta

This small building with a portico on three sides owes its name to a dedicatory inscription in Oscan language. This language was spoken by the Samnites and other tribes of southern Italy. Initially inscriptions were written in an alphabet derived from the Etruscan one, but in a second phase Latin and Greek alphabets were used. The written Oscan language was entirely replaced by Latin in the Ist century BC. Central Baths: (above) front of the baths; (below-left): hypocaust (heating system); (below-right) slabs of cipollino which were to be used to face some halls; the use of this Greek marble was not yet as popular as it became in the IInd century

The whole of Insula 4 in Region IX is occupied by extensive Thermae, which were in course of construction at the time the city was overwhelmed. In the large court the labourers were in the very act of making the gutter and laying the bases for the columns of the portico. (..) This was a men's bath only, though it is of unwonted size. (..) The heating-furnaces had not yet been built.
Karl Baedeker - Handbooks for Travellers: Southern Italy and Sicily - 1900 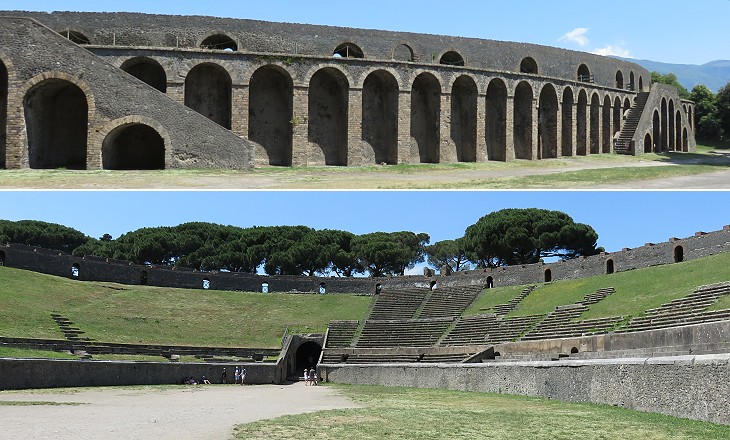 The vast ruins of an amphitheatre are proofs of the grandeur of Pompeii. The amphitheatre is a large oval structure situated on a rising ground. Its lower circumference on the inside measures three thousand Neapolitan palms. (..) Seneca tells us that this place was almost entirely destroyed by an earthquake under Nero.
Johann Joachim Winckelmann - Critical account of the situation and destruction by the first eruptions of Mt. Vesuvius, of Herculaneum, Pompeii and Stabia - written in 1762 and translated into English in 1771
The sites of the first excavations of Pompeii were chosen in a rather casual way and initially not all the ruins were believed to belong to the same town. Only at the beginning of the XIXth century was it decided to excavate all the wall enclosure in order to identify the exact location of Pompeii. In 1827 the amphitheatre was completely freed from the 6m/19ft layer of ashes which covered it. It is one of the largest and earliest (70 BC) buildings of this type. In part it exploited a natural depression of the ground, so that from the interior it looks taller than from outside. 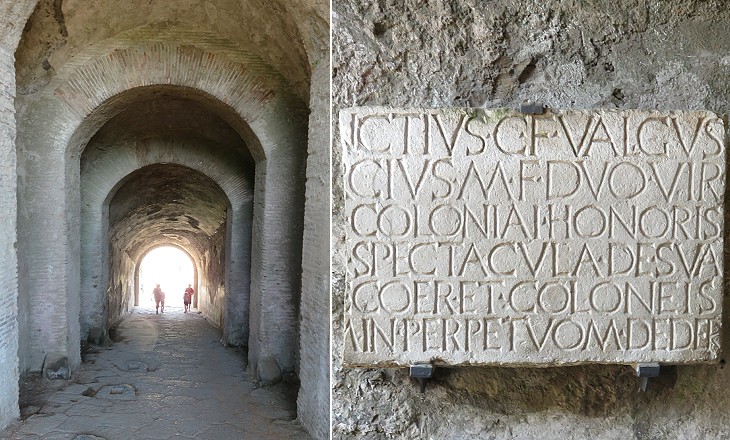 The amphitheatre could seat 20,000 spectators who in part came from other towns.
About the same time (59 AD) a trifling beginning led to frightful bloodshed between the inhabitants of Nuceria and Pompeii, at a gladiatorial show exhibited by Livineius Regulus, who had been, as I have related, expelled from the Senate. With the unruly spirit of townsfolk, they began with abusive language of each other; then they took up stones and at last weapons, the advantage resting with the populace of Pompeii, where the show was being exhibited. And so there were brought to Rome a number of the people of Nuceria, with their bodies mutilated by wounds, and many lamented the deaths of children or of parents. The emperor (Nero) entrusted the trial of the case to the Senate, and the Senate to the consuls, and then again the matter being referred back to the Senators, the inhabitants of Pompeii were forbidden to have any such public gathering for ten years, and all associations they had formed in defiance of the laws were dissolved. Livineius and the others who had excited the disturbance, were punished with exile.
Tacitus - The Annals - Book XIV - Translated by Alfred John Church and William Jackson Brodribb.
The ban was lifted after the 62 earthquake. 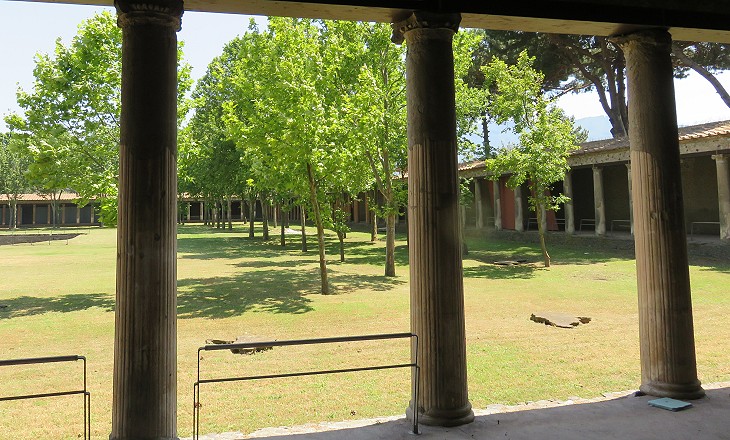 This large portico was built at the time of Emperor Augustus as a place where the youth of Pompeii could exercise and compete. It was part of an overall "moral" policy promoted by the Emperor to bring back the Romans to their ancient lifestyle which contacts with eastern civilizations had mollified. It is likely that the Great Palaestra was used by gladiators too. The description of the incident occurred at the amphitheatre suggests that the "gladiators" were teams of local youths trained in martial arts. 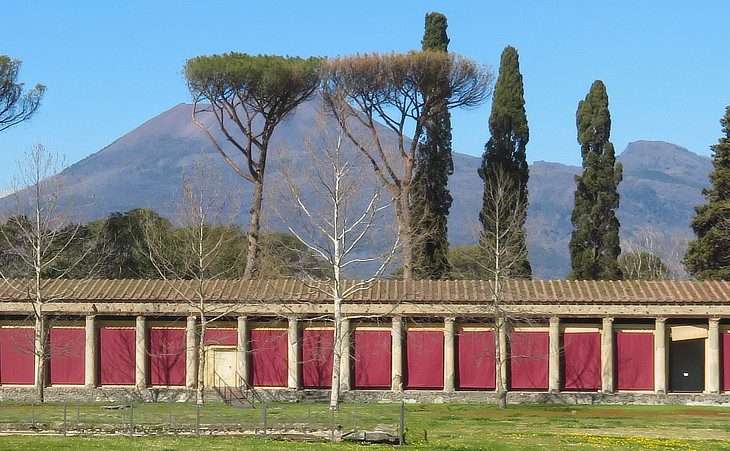 Move to:
The Town
Temples and Religion
Public Buildings near the Forum
Houses
Paintings
Other Works of Art
Tombs
The Economy
Villa di Poppea at Oplontis