Wandering in Giardino di Boboli
(lions in Florence and Rome)

In 1549 Eleanor of Toledo, wife of Duke Cosimo I Medici and daughter of Emperor Charles V, bought the unfinished palace of the Pitti family and in 1550 the building became the official residence of the Duke of Florence (Grand Duke after 1569) until 1860 and from 1865 to 1870 the residence of the King of Italy. Eleanor and Cosimo asked Niccolò Tribolo to design a garden on the slopes of the Boboli hill behind the palace. 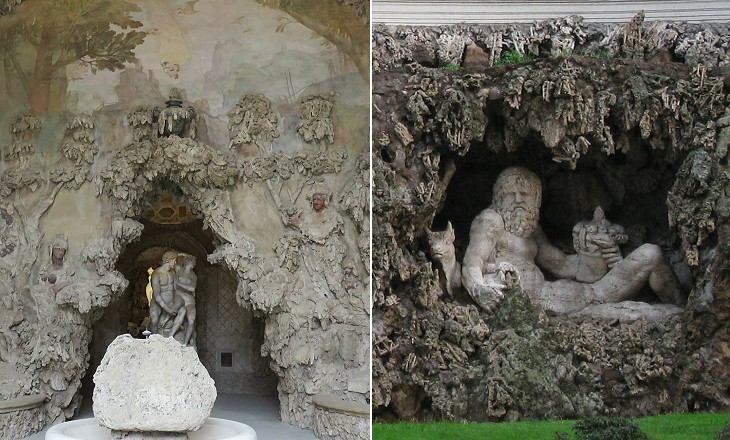 Grottoes in Boboli and in Palazzo Rospigliosi in Rome

The garden designed by Tribolo was the object of many additions and changes in the next two centuries. It has several points of contact with the gardens of the Roman villas. Near the entrance in 1583-1593 Bernardo Buontalenti created a grotto (an artificial cave) aimed at providing a spot where the Grand Duke and his family could find a cool place during the Florentine hot summers. The idea was not original as the ancient Romans had already embellished their villas with similar grottoes (Ninfeo di Egeria, Grotte di Nerone), but Buontalenti designed a rich decoration imitating the rocks of a cave which influenced the design of similar grottoes in Rome.

Amaltheia in Boboli (grotta Menaboni) and in Casino Pontificio in Vaticano (you may wish to see The Goat Amaltheia with the Infant Jupiter and a Faun, the earliest work by Gian Lorenzo Bernini - 1615 or before)

Amaltheia, the mythological she-goat nymph who fed Zeus, apparently was very popular in the second half of the XVIth century and she appears in the decoration of both Boboli and Casino Pontificio in Vaticano. When Zeus became Lord of the Universe, he set Amaltheia's image among the stars, as Capricorn. 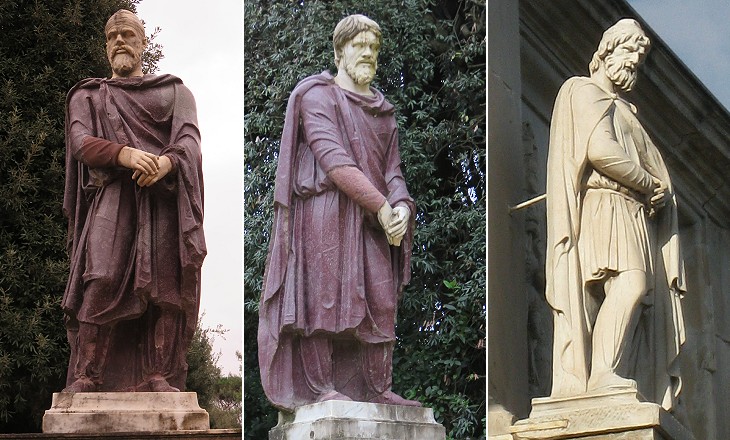 Dacian prisoners in Boboli and in Arco di Costantino

The Grand Dukes moved to Boboli some statues which decorated Villa Medici in Rome, and almost all of them in 1780. Two ancient Roman statues portraying a Dacian prisoner greet the visitors at the beginning of the avenue leading to the top of the hill. After the conquest of Dacia by Emperor Trajan, the Dacian prisoner became a recurring theme in the decoration of Roman monuments and buildings. The prisoner was always portrayed in a very dignified manner as his proud standing increased the glory of the emperor who had subjugated him. 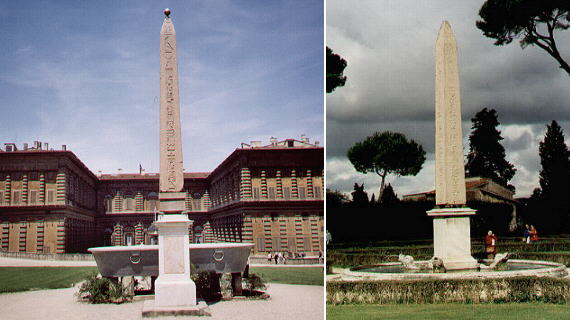 Obelisk in Boboli and its copy in Villa Medici

The main treasure the Grand Dukes moved to Boboli from Villa Medici is the Egyptian obelisk which once stood in Isaeum/Serapeum Campense, a large complex of Temples dedicated to the Egyptian gods Isis (hence Isaeum) and Serapis (hence Serapeum) in Campus Martius. The obelisk was originally erected by Pharaoh Rameses II in Heliopolis. A copy now stands in Villa Medici. 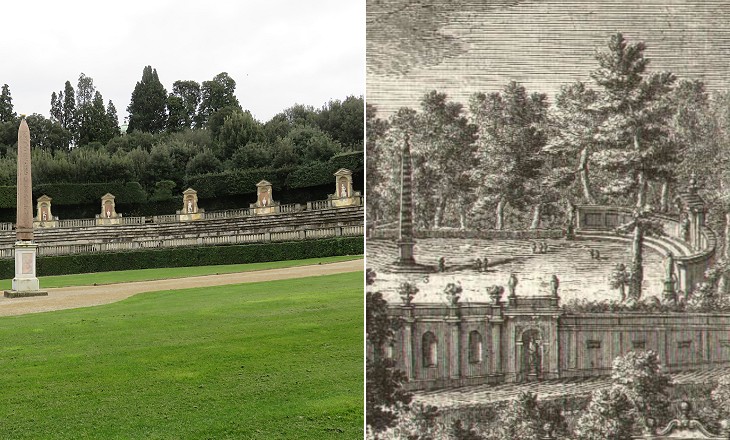 Amphitheatres in Boboli and in Villa Mattei in Rome

Ancient and modern statues in Boboli

The Grand Dukes placed in Boboli many ancient statues which in some cases were largely restored (left): they also placed some late Renaissance statues having the appearance of an ancient statue (centre) with only a few statues dedicated to contemporary subjects (right). The seller of water is also one of the talking statues of Rome.

The fountains in Boboli have several points in common with Roman fountains in the choice of subjects (tritons) in the use of small bronze additions, in providing the scene for mythological events (Andromeda chained to a rock, crying for help while the sea-monster sent by Poseidon emerges from the water, an event which is depicted also in Villa d'Este in Tivoli) and in surprising the viewer with unexpected details.

At the moment of leaving Boboli through Annalena's gate my attention was caught by the lion at its top: it was a true lion, not one of the very humanized Renaissance and Baroque lions. It was most likely sculptured by someone who had seen the lions by Antonio Canova in the Monument to Pope Clement XIII. Pietro da Cortona: heraldic symbols of Ferdinand II Grand Duke of Tuscany inside Palazzo Pitti (left) and of Pope Urban VIII inside Palazzo Barberini (right); see other paintings by Cortona in a page covering the Metamorphoses by Ovid and in the historical section

Other artistic links between Florence and Rome can be noticed in the fresco decoration of Palazzo Pitti by Pietro da Cortona and Ciro Ferri, his pupil, which were made between 1637 and 1665.

The image used as background for this page shows the heraldic lily which is the symbol of Florence.

Return to page one or climb the hill and see a Fortress With a View.