Links to this page can be found in Book 5, Map D3, Day 6, View D7 and Rione Trastevere. 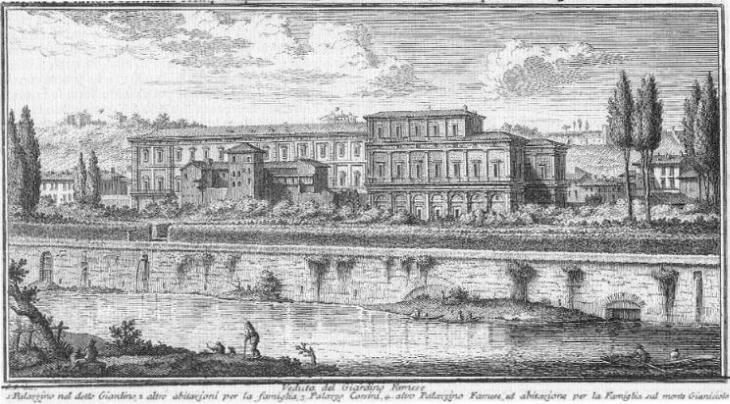 Rome during the Papal rule experienced many floods because the River Tiber was not dredged properly and over the centuries its width decreased; this 1754 etching by Giuseppe Vasi shows mounds on both sides of the river which narrowed the space between the two banks. In addition Giardino Farnese stood on an artificial terrace which projected from the right bank.
The view is taken from the green dot in the small 1748 map here below. In the description below the plate Vasi made reference to: 1) Palazzino Farnese (La Farnesina); 2) Other buildings for the family; 3) Palazzo Corsini; 4) Casino Farnese al Gianicolo. 3) and 4) are shown in detail in other pages. The map shows also 5) approximate site a Roman villa. When Vasi made reference to the family, it was not to relatives of the Farnese, but to their household servants, as the word derives from Lat. famulus, servant; the ancient Romans used gens to mean an enlarged family. In the 1880s the riverbed was enlarged to the detriment of the garden which is now very small; in addition high walls and lungotevere, a tree-lined street, were built on the river banks. Today it is difficult to see the small casino on the Janiculum which Vasi mentions in the plate; it is located to the left of Monumento a Giuseppe Garibaldi.
The building for the servants was modified in the XIXth century and the loggia on the roof of la Farnesina is smaller than in the plate. 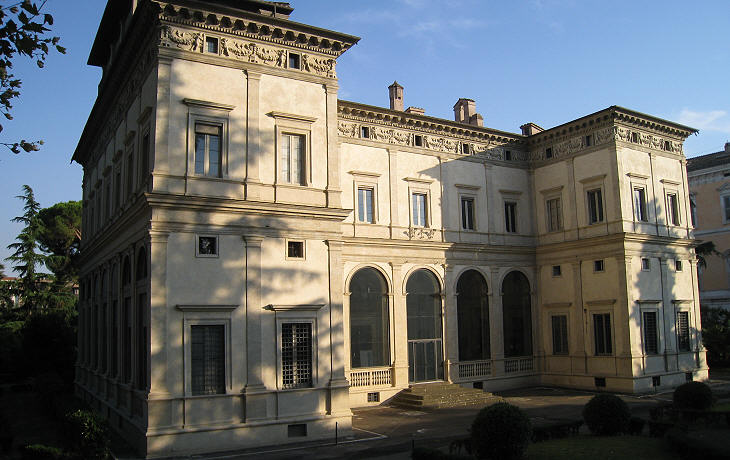 Main façade in the late afternoon in June 2009

This Palace is now Uninhabited, and gone to Ruin in a great measure; and is so Unfrequented, that the Court through which one goes to the House is all overgrown with Grass; and they told me no body had been to see this Gallery for about two Years: the Keys were hardly to be found; and I was not without great danger of not seeing it, though I was at Rome several Months.
Jonathan and Jonathan Richardson - Account of Some of the Statues, etc. in Italy - 1722
We came out and stood a long time looking up in the pale afternoon light at the beautiful face of the tenderly aging but not yet decrepit casino. It was utterly charming, and it prompted many vagaries which I might easily have mistaken for ideas.
Read more of William Dean Howells' account of his visit to this site in 1908.
The villa was built between 1508 and 1520 for Agostino Chigi, a very rich banker from Siena who made a fortune by financing the popes in return for mining/exploitation rights such as the mining of alum at Tolfa.
According to tradition on April 30, 1518, at the end of a party attended by Pope Leo X and held in a loggia by the river, Chigi ordered that the precious wares used for the banquet should be thrown in the water (although he is suspected of having put nets to recover them) and the loggia pulled down. 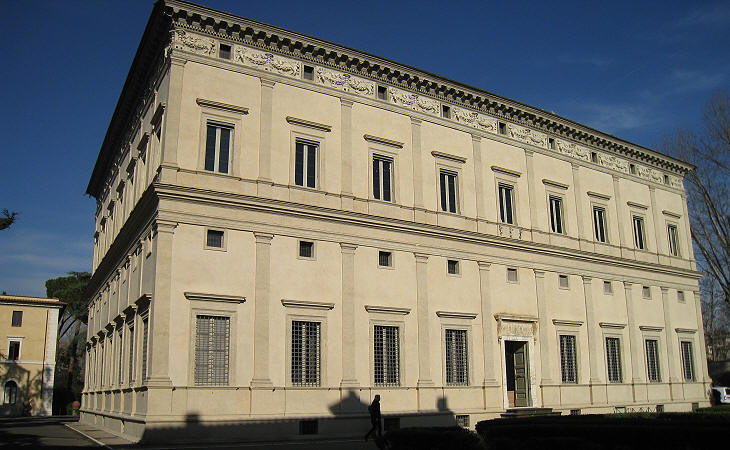 The building was designed by Baldassarre Peruzzi who was responsible also of its decoration which he personally executed or commissioned other painters, including Raphael.
In 1590 the property was bought by the Farnese, who for some time considered linking it to their palace on the other side of the river with a boat bridge; because the villa was smaller than the palace it was called la Farnesina (-ina being a suffix which means small).

Detail of the cornice by Baldassarre Peruzzi

Villas built in the second half of the XVIth century (e.g. Villa Medici) had a decoration which covered almost every inch of their main façade. The walls of la Farnesina appear rather bare with the exception of the cornice and of a relief above the entrance of the rear façade (you can see it in the image used as background for this page); we know however that they had a graffito decoration by Peruzzi, similar to that of Palazzo Vitelli at Città di Castello. 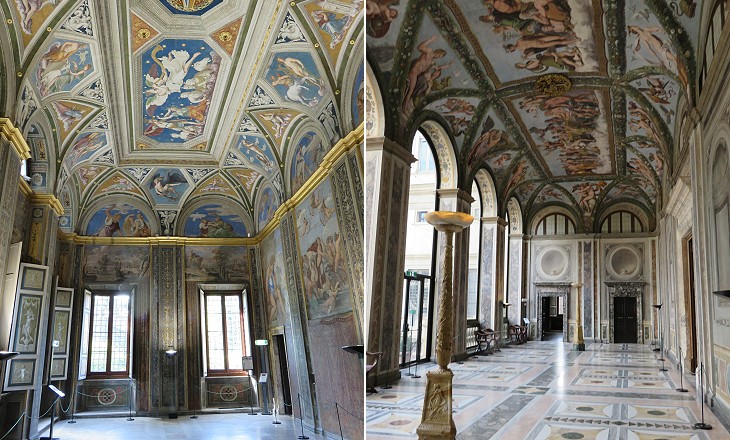 The decoration of the interior reflects the culture of the time, when the myths narrated by Greek and Latin poets were regarded as symbols of a superior civilization which Renaissance men wanted to emulate.
Sala di Galatea is so named after a fresco by Raphael portraying the nymph, but the overall purpose of its decoration was to show the position of stars and planets on December 1, 1466 the day Agostino Chigi was born. Astrologers were held in high esteem and actually many astronomers did not refrain from providing horoscopes to the wealthy and the powerful.
The Gallery of Psyche is one of the most famous Works of Raffaele; and the Painting as well as the Gallery has been Repaired. (..) The Gallery is Small, but very Lightsome and Gay. (..) Having been much Decay d, it was Retouched, and in many parts entirely gone over by Carlo Marat(ta) (a leading Roman painter); who tho' a very admirable Master, has not only not restored Raffaele injured by Time, but injur'd him more than Time had done, or could have done.
Richardson
Yesterday I was with Angelica at the Farnesina, where is painted the Fable of Psyche. How often, in how many situations, have I contemplated with you the bright copies of these pictures in my rooms! The thought struck me forcibly, knowing as I did from the copies these representations almost by heart. This salon, or rather gallery, is the most beautiful I know in respect of decoration, notwithstanding all the destruction and restoration it has sustained.
J. W. Goethe - Italian Journey - July 15, 1787 - translation by Charles Nisbeth.
Jupiter ordered Mercury to bring Psyche to heaven at once. Once there he handed her a cup of ambrosia, saying: "Drink this Psyche, and be immortal. Cupid will never renege on the bond, and the marriage will last forever."
Lucius Apuleius - The Golden Ass - Book VI - translation by A. S. Kline.
The story of Cupid and Psyche is one of eternal love and Agostino Chigi wanted it to be painted (by Raphael and others) as a love tribute to Francesca Ordeaschi, his mistress who bore him four children and whom he was married to by Pope Leo X in 1519. 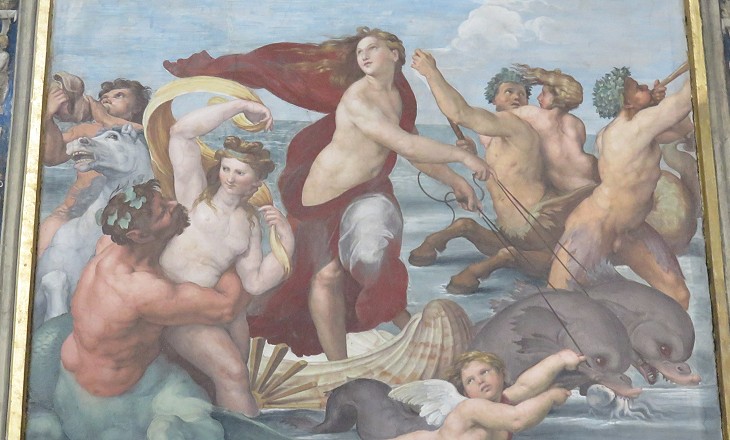 Raphael: detail of the Triumph of Galatea (read Ovid's account about Galatea)

The Galatea; 'tis pretty well preserv'd, but does not answer the Idea I had of it. The Face of the Galatea is not Handsome, nor perfecftly well drawn: And her Drapery, which was Red, and is flying in the Air, besides that it has no graceful Shape, is now so Black that it looks intolerably Heavy, and as Hard against the Ground as if it was inlaid. Richardson
Raphael was never put out by the space or want of space allowed him by the architect; it rather belongs to the greatness and elegance of his genius that he knew how to fill and adorn every place in the most tasteful manner, as is so conspicuously manifested in the Farnesina. Goethe 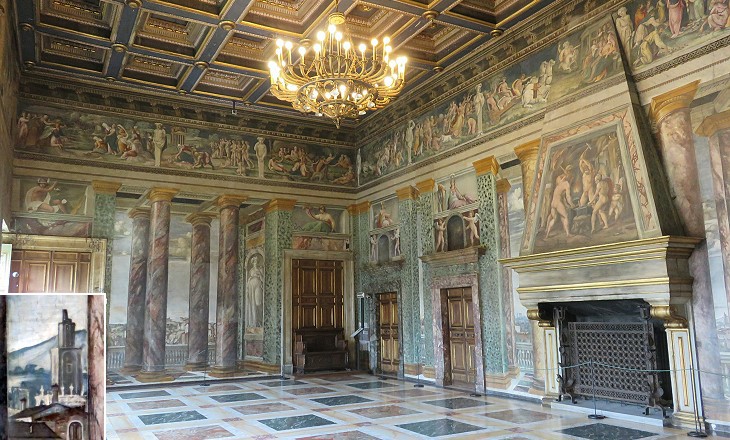 In the main hall on the first floor Peruzzi showed his mastery of perspective laws by painting a series of fake balconies over the City of Rome and the surrounding countryside. The decoration was completed by portraits of the twelve Olympian gods and by fifteen episodes from the Metamorphoses by Ovid. The Forge of Vulcan was painted on the mantelpiece. 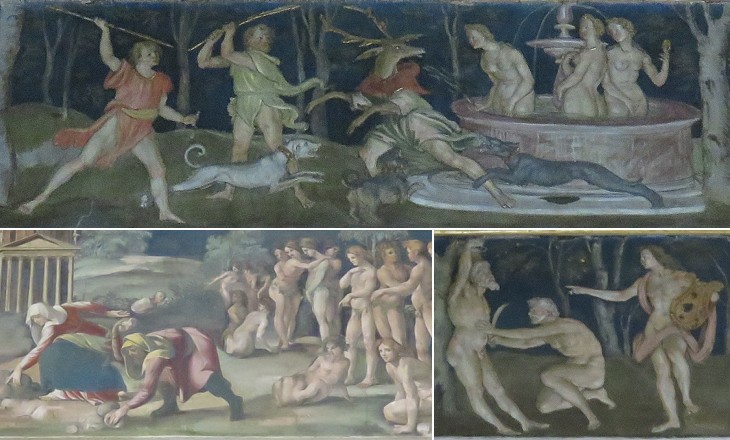 The episodes narrated by Ovid in the Metamorphoses are often dramatic and even gruesome, but Peruzzi and the other painters depicted them in such a way that these aspects are forgotten owing to the beauty of the subjects. You may wish to see a page with more information about the Metamorphoses in ancient and modern art and the meaning of some of the paintings shown in this page. 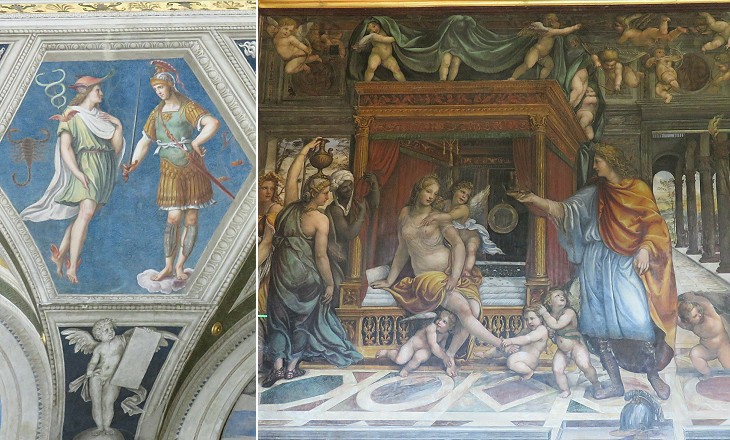 (left) Sala dell'Oroscopo: Mercury with Scorpio and Mars with Libra; (right) Bedroom of Agostino Chigi - Alexander the Great and Roxana by il Sodoma

At the time the villa was built the frescoes at Pompeii had not yet been uncovered, yet it was known that the Romans decorated their cubicula (small bedrooms) with paintings having an erotic content. Il Sodoma was commissioned to portray the first night of marriage of Alexander the Great and Roxana, his Persian bride.
Agostino Chigi commissioned Raphael to design family chapels at S. Maria del Popolo (where he was buried) and at S. Maria della Pace, two churches which were dear to Pope Julius II because they were rebuilt by Pope Sixtus IV, his uncle. He was on such good terms with the Pope that he was allowed to add to the six mountains and a star of his coat of arms, the oak which was the heraldic symbol of the Della Rovere, the family of the Pope (you may wish to see two coats of arms at Ariccia, a fiefdom of the Chigi). 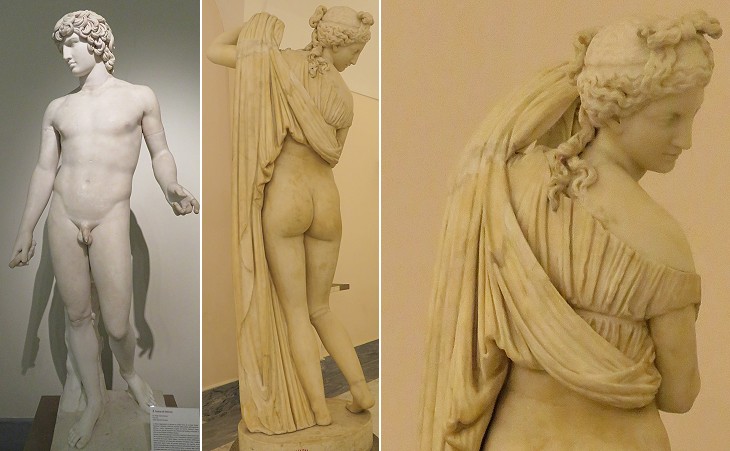 Archaeological Museum of Naples - Farnese Collection: (left) Antinous, perhaps from Villa Adriana, it might have been bought by Agostino Chigi; (right) Venus from Villa della Farnesina. Both statues have been heavily restored/completed

The gardens were embellished with ancient statues and reliefs, but after all the Farnese properties were acquired by Charles VII, King of Naples, all movable works of art were relocated to Naples or Caserta, where the King built a very large palace. 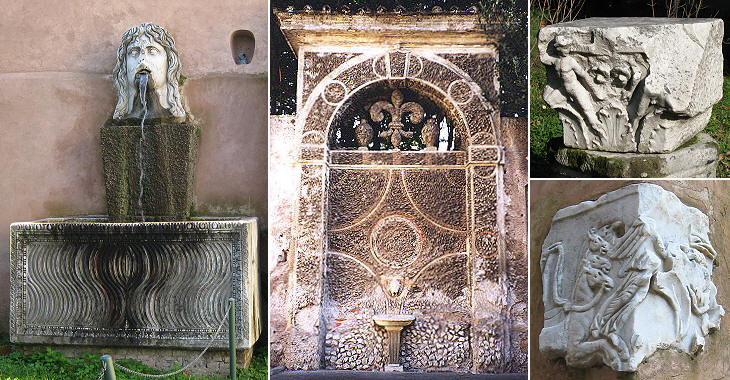 (left) A fountain made up of ancient materials; (centre) fountain with a fleur-de-lis, the Farnese heraldic symbol; (right) ancient fragments

In 1927 the villa was bought by the Italian State and its interior was brought back to its pristine splendour. It currently houses meetings and conferences of Accademia dei Lincei, the most ancient Roman scientific academy. The library of the institution and other offices are in nearby Palazzo Corsini. 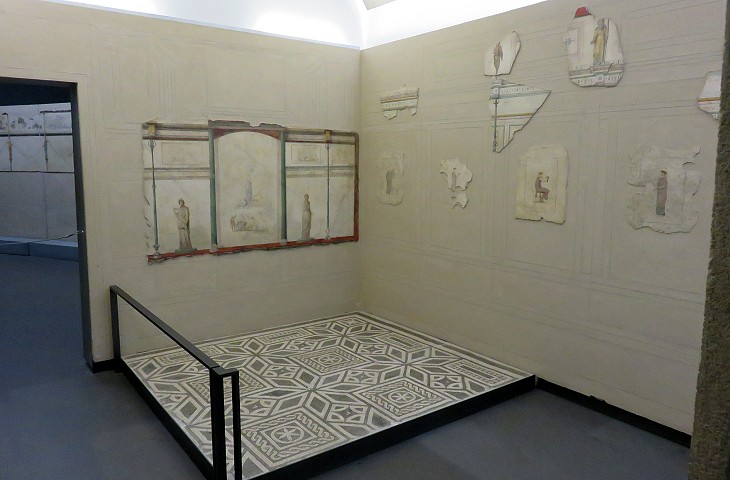 Museo Nazionale Romano: Reconstruction of one of the rooms

When the gardens of the villa were excavated to enlarge the riverbed an ancient Roman house of the time of Emperor Augustus was found. It was not possible to redesign the new banks in order to preserve the house. Its paintings, mosaics and stuccoes were detached and moved to a museum.
It seems as if Baldassarre Peruzzi, Raphael, Giulio Romano, il Sodoma, and Gaudenzio Ferrari, to whom we owe the wonders of the Farnesina dei Chigi, must have unconsciously felt the influence of the wonders of this Roman house which was buried under their feet. It is a great pity that the two could not have been left standing together. What a subject for study and comparison these two sets of masterpieces of the golden ages of Augustus and Leo X would have offered to the lover of art!
(..) Next in importance to the Roman house comes the tomb of Sulpicius Platorinus, discovered in May, 1880, at the opposite end of the Farnesina Gardens, near the walls of Aurelian.
Roberto Lanciani - Pagan and Christian Rome - 1893 The frieze of the "black" series represents the trying of a criminal case by a magistrate, very likely the owner of the palace. (..) Near the frieze, the artist has drawn other pictures. They are genre subjects, such as a school of declamation, a wedding, a banquet; and though the figures are not five inches long, they are so wonderfully executed that even the eyebrows are discernible. R. Lanciani 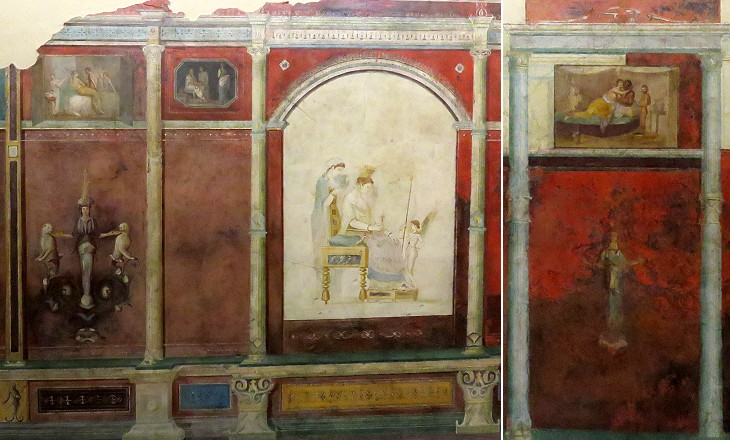 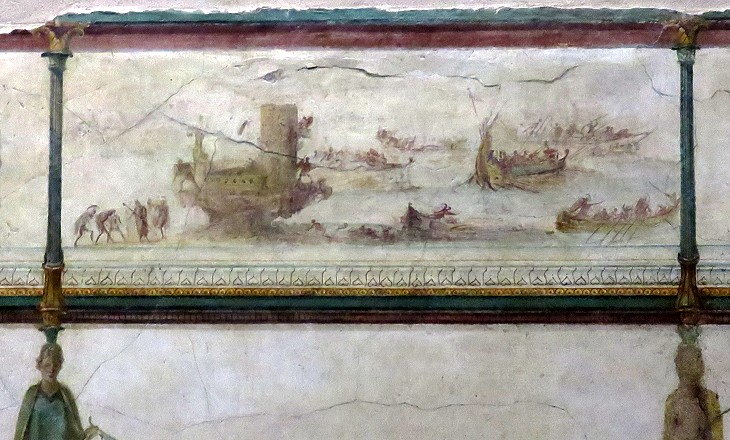 Some details of the paintings have led archaeologists to suggest they were referring to Marcus Vipsanius Agrippa's naval victory at Actium.
You may wish to compare these frescoes with those at Casa di Augusto and at Insula delle Ierodule at Ostia. 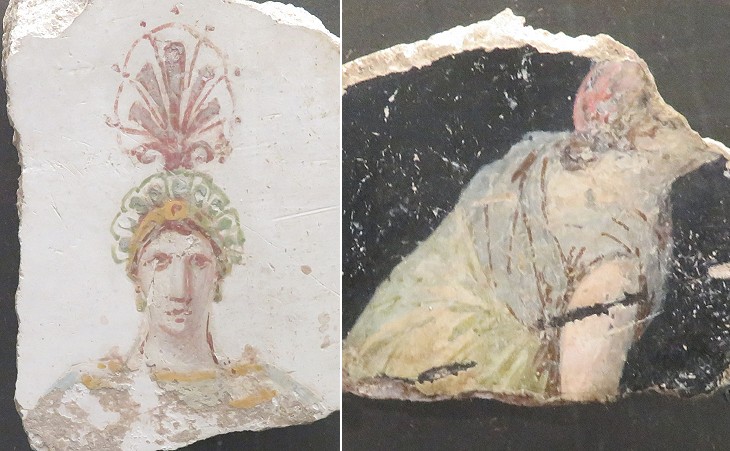 Brussels Art & History Museum: other fragments of the frescoes of the villa