The marble of Numidia, as it is described by ancient authors, was of the finest contexture, and used upon the most sumptuous occasions. Solinus calls it "eximium marmor" and Suetonium mentions a column of it that was erected to Julius Caesar, with this inscription, Patri Patriae.
The colour was yellow, with red or purple spots or streaks.
Thomas Shaw - Travels or Observations relating to several parts of Barbary and the Levant - 1738. 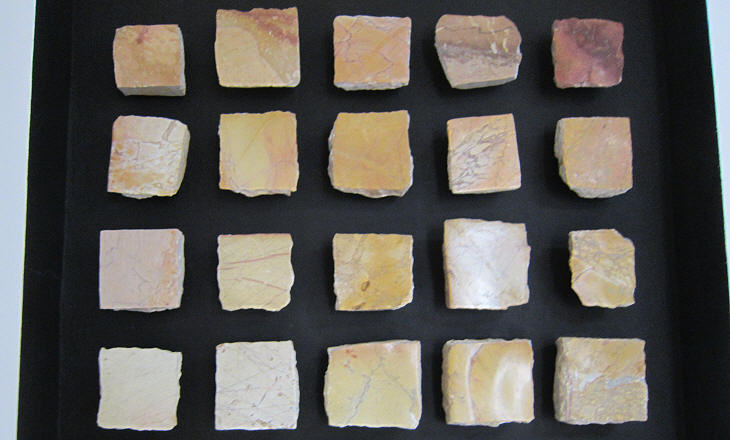 Marmor Numidicum (marble from Numidia, the ancient kingdom to the west of the Carthaginian territories which was conquered by the Romans in 105 BC) can still be seen in some ancient Roman monuments (e.g. at Villa Adriana). According to Pliny it was first utilized by Lepidus, one of the second triumvirs, for the decoration of his Roman house.
Fragments taken from ancient buildings were used by medieval mosaicists (e.g. at Civita Castellana) and by Renaissance and Baroque architects (e.g. Gian Lorenzo Bernini in the Cornaro Chapel at S. Maria della Vittoria). At that time it was referred to as giallo antico (old yellow) or rosso antico (old red). 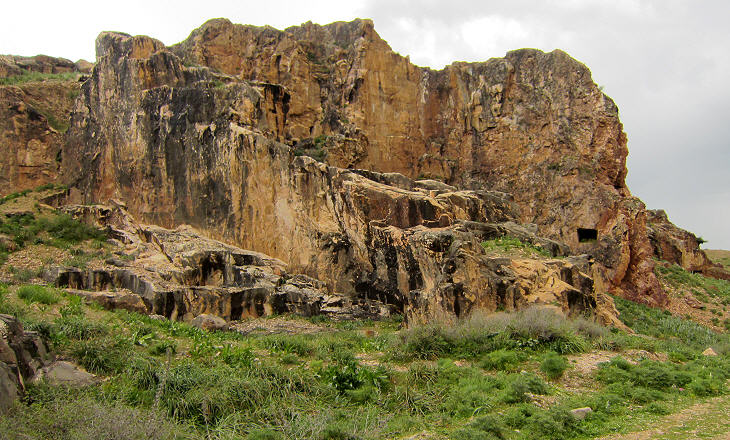 The quarries at Chemtou are much in the condition in which they were left by the Romans at the time of the Vandal invasion of the country in the Vth century. Half-quarried blocks lie side by side in the yawning chasms of the rocks, with the mason's marks still legible, and far down the cavernous abyss can be seen the preparations for working one of those lordly monoliths, which still excite our admiration in Rome and elsewhere.
Alexander Graham - Roman Africa - 1902
In 1738 when Thomas Shaw wrote his book the exact location where the Romans quarried marmor Numidicum was unknown. The quarries were discovered when the French built a railway in the region to link Algeria with Tunisia towards the end of the XIXth century; they also discovered the ruin of Bulla Regia, not far from Simitthus. A Belgian company made an attempt to restart quarrying and the first Roman inscriptions and gravestones were collected by their managers. 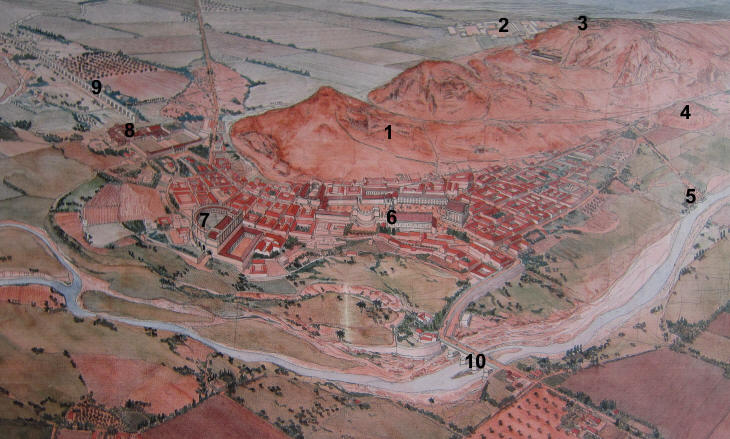 Reconstruction of Simitthus and of its quarries: 1) quarries; 2) forced labour camp; 3) top of the hill with ruins of an ancient temple; 4) debris hill; 5) marble shipping point; 6) forum of Simitthus; 7) theatre; 8) baths; 9) aqueduct; 10) bridge on the Mejerda River

From 1965 to 1996 Tunisian authorities and the Rome Section of the German Archaeological Institute have extensively researched ancient Simitthus. Their main finding was the camp where forced labourers were confined which included a section for the guards of the camp and the engineers and accountants who worked at the quarry. The town and the camp were situated at the opposite sides of the quarries as if the two were not meant to see each other. 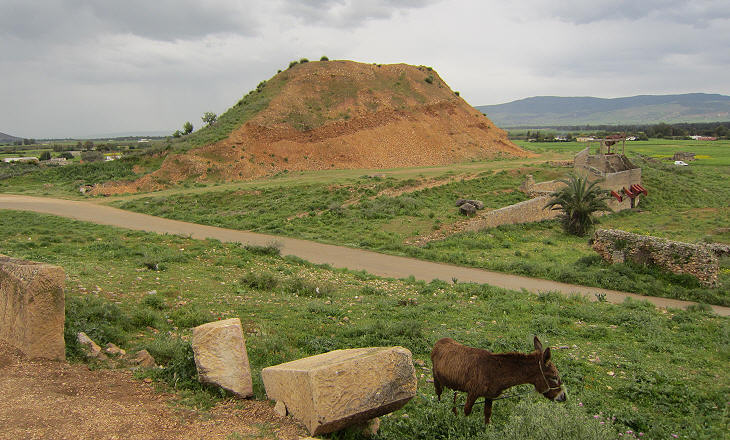 Debris hill, the "Monte Testaccio" of Simitthus and some modern abandoned facilities

Roman law did not consider jailing as an ordinary mean to sentence a crime which did not entail capital punishment (death sentences were usually carried out by decapitation). Roman citizens of the upper classes were exiled which is what happened to Cicero and Ovid. Slaves and the humiliores (the lowest ones) were subject to damnatio (condemnation) to forms of forced labour (usually for life) or to fight in the amphitheatres (damnatio ad bestias). Damnatio ad marmora indicated forced labour at quarries. 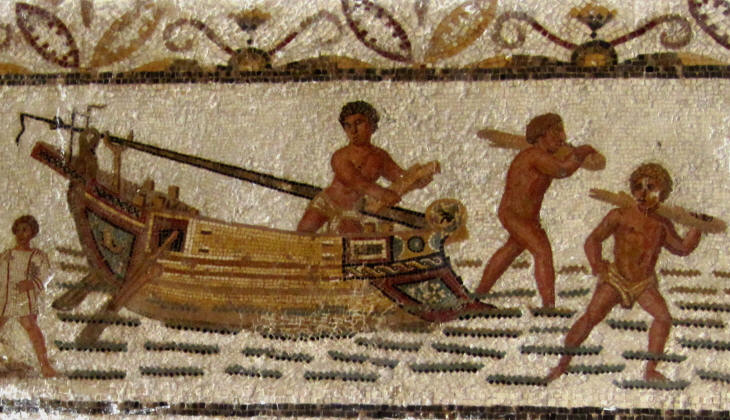 Museum of Bardo: mosaic from Sousse depicting the unloading of a ship carrying timber

Marble was cut into blocks and columns at the quarry and then carried to the bank of the River Mejerda over a paved road. It was loaded on low hulled ships which brought it to Utica at the mouth of the river where it was transferred to larger ships to reach Rome and other cities of the Empire. 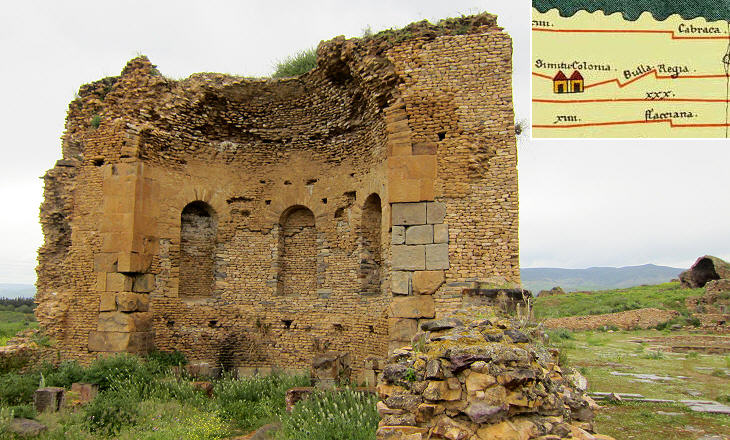 Apse of a basilica in the Forum: (inset) section of "Tabula Peutingeriana", a Vth century map of the roads of the Roman Empire showing Simitu Colonia, nearby Bulla Regia and Tabarka on the coast (Cabraka)

When the harbour of Utica experienced silting, Emperor Hadrian built a road from Simitthus to Tabarka, the nearest port across a mountain region. The economy of Simitthus benefited from the quarries because they required a series of activities which were not performed by forced labourers, but by technicians, accountants and sailors. In addition the land along the Mejerda River was fertile and its crops were exported to Rome (see a view of the countryside around the town in the introductory page). In 27 AD Simitthus acquired the status of colonia which indicates that many of its inhabitants were Roman citizens. The town had a large forum, the size and location of which have been clearly identified, although the only remaining building is the massive apse of a basilica.

Simitthus was not founded by the Romans. This fine relief is thought by most archaeologists to represent the Dii Mauri (Gods of the Moors), a term used by the Romans to indicate ancestral Numidian gods who were not associated with Roman counterparts. Another opinion suggests they represent goddess Astarte and seven Phoenician gods. 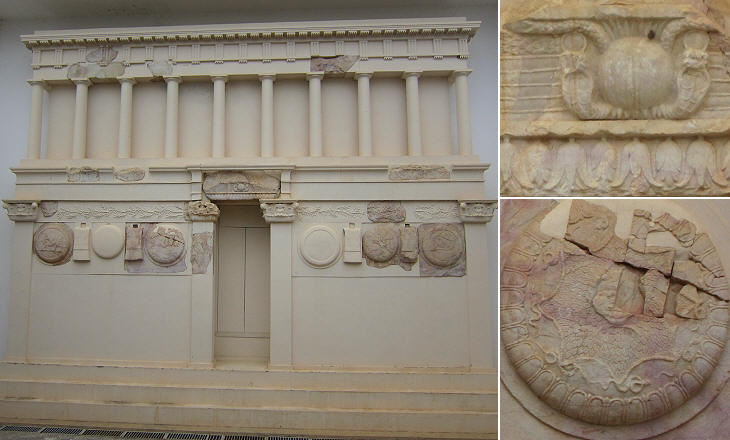 Museum of Chemtou: reconstructed eastern façade of a Numidian shrine and details of its decoration

The quarries were excavated already by the Numidians who built a shrine at the very top of the hill. During the Roman period it was turned into a Temple to Saturn.
Temples to Saturn on high ground have been found at other locations such as Thugga and Thuburbo Majus. Saturn was the Latin name given to Baal, a Phoenician god worshipped by the Carthaginians and eventually by the Numidians. In Phoenicia itself, during the Roman rule, Baal was associated with Jupiter (see the gigantic temple to Jupiter Heliopolitanus at Baalbek). 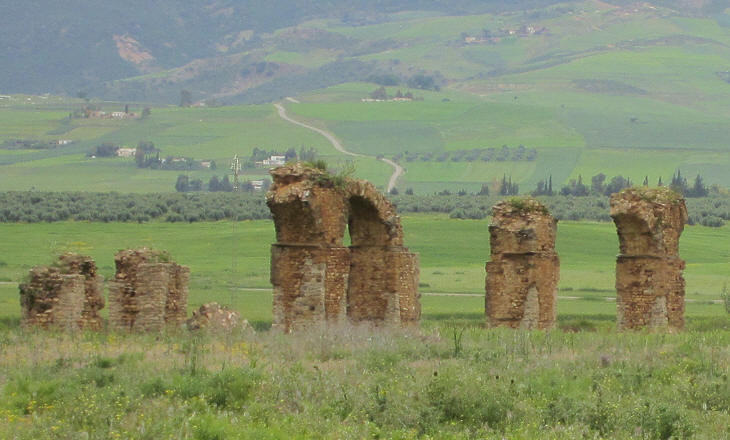 Before the excavations carried out by German archaeologists the most prominent ruin in the landscape is that of a long aqueduct, which commenced about 7 Kil. distant among the hills to the west (..) and entered a series of seven vaulted cisterns about 2 kil. from the marble works. Thence it passed, partly underground and partly on a long line of arches (..) till it terminated at the Thermae, in the middle of the city.
Murray's Handbook for travellers in Algeria and Tunisia - 1895 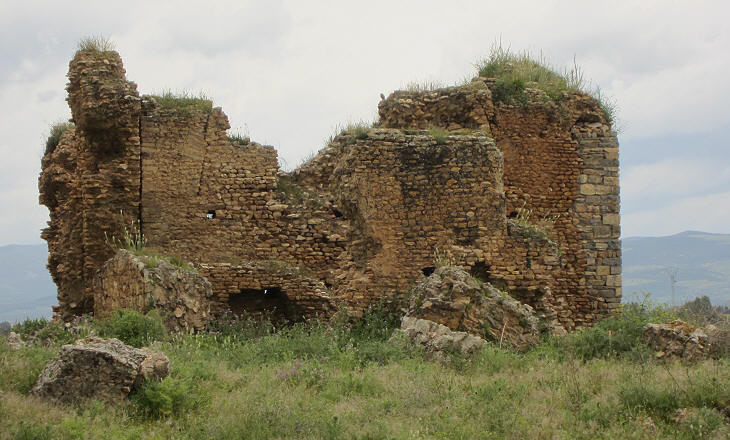 The archaeological area of Simitthus is not fenced and a vast complex of baths is currently split into two sections by the Jendouba-Tabarka road. Based on the size of the remaining walls the baths must have been large, however archaeologists have not found traces of columns of the marble for which Simitthus was famous, which instead can be seen at the baths of Thuburbo Majus. 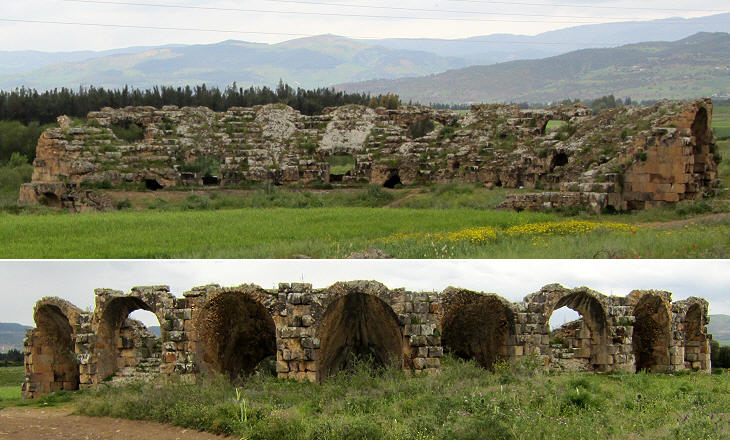 The inhabitants of Simitthus could spend their leisure time at a theatre which one would have expected to be partially excavated on the side of a nearby hill. Instead it was built in the plain not far from the river. The stage is completely lost, but the structure supporting the seats has not collapsed. Archaeologists have found evidence that it was fortified by the Byzantines in the VIth century and that some houses were nested inside its arches.
Quarrying activities at Simitthus declined in the IIIrd century and the town was probably abandoned sometime after the Arab invasion at the end of the the VIIth century. 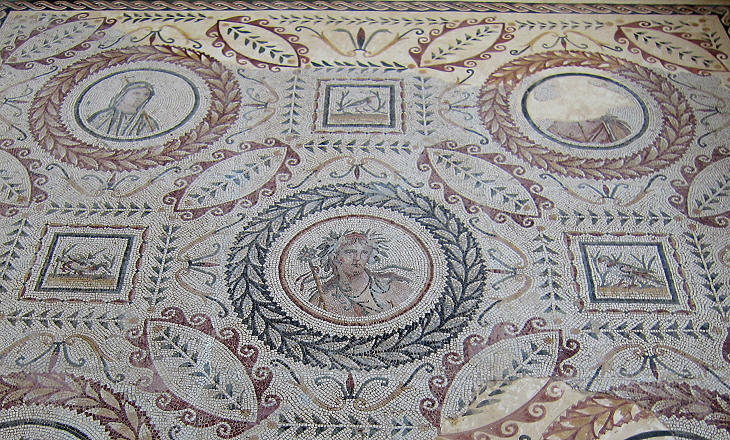 Museum of Chemtou: detail of a mosaic portraying Dionysus/Bacchus and the Four Seasons, a popular subject throughout the whole Empire, see a mosaic at Lyon

Bulla Regia, ten miles east of Simitthus, retains some of the finest mosaics found in Tunisia. Simitthus has less to offer, yet its museum houses an elegant mosaic where fragments of the local marble were employed. 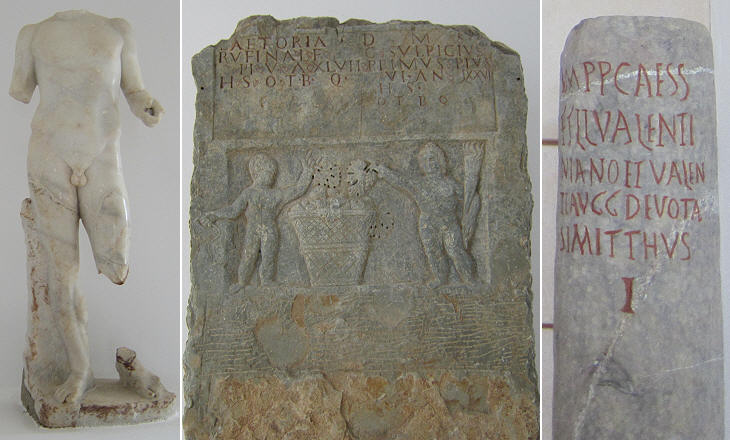 Museum of Chemtou: Roman section: (left) "Athlete of Simitthus" (IInd century AD copy of an original statue by Polykleitos - Greek marble; see another copy found at Delos); (centre) gravestone with names and ages at death and a Late Empire relief; (right) dedicatory inscription to Emperors Valentinan I and Valens (late IVth century) showing the loss of skills even in simple inscriptions

Simitthus has a well arranged museum which most Tunisian archaeological sites would need too.
The image used as background for this page shows a section of the modern column erected to Julius Caesar at the entrance of the museum.