Thapsus and Leptis Minor
(detail of the theatre at Thugga) 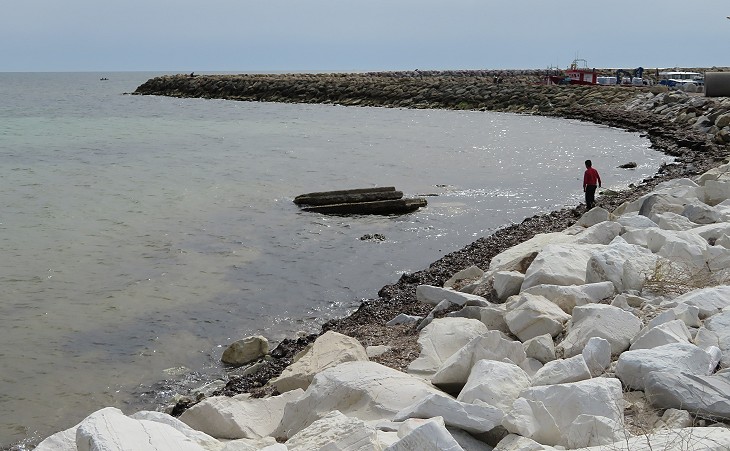 Ras Dimass, a cape at the southern end of the Gulf of Monastir: the likely site of the harbour of Thapsus, east of the current one, the construction of which destroyed an ancient jetty

Demass, the antient Thapsus, is situated upon a low Neck. (..) There is still remaining, in Defiance of Time and the Sea, a great Part of the Cothon (artificial harbour).
Thomas Shaw - Travels, or, observations relating to several parts of Barbary and the Levant - 1738
We eventually arrived at Cape Dimass, near which the remains of a jetty which protected the harbour of ancient Thapsus are still visible.
Free translation from Victor Guérin - Voyage archéologique dans la Régence de Tunis - 1862
In 46 BC Julius Caesar won at Thapsus a decisive battle against the remaining supporters of Pompey, including Cato the Younger who committed suicide after having learnt about the defeat. 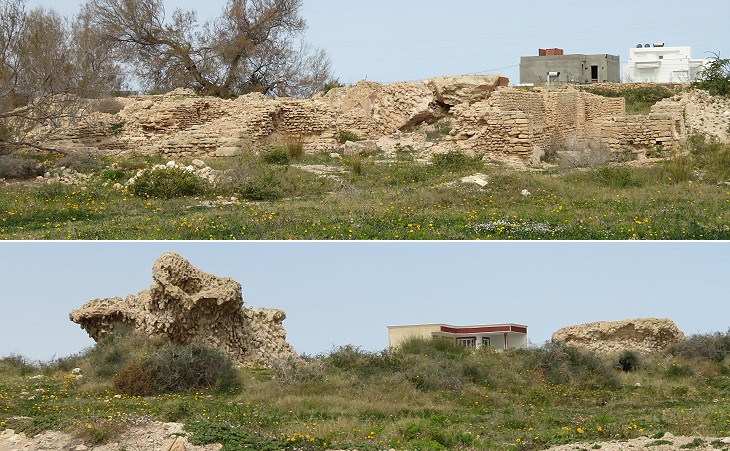 (above) Baths; (below) other Roman structures near the harbour

I had received at Tunis many splendid descriptions of the vast remains of this town, and now felt much disappointed at seeing so few of them extant, and these few in such a state of perfect ruin.
Sir Grenville Temple - Excursions in the Mediterranean - 1835
The famous town of Thapsus is now completely destroyed. The land upon which it stood is fully farmed so that evidence of its houses and public buildings has completely disappeared. (..) The farmers utilize the stones of ancient buildings they come across to build low walls which separate their properties. Guérin
Travellers of the past were keen on visiting the site of this memorable battle, but today the remains of Thapsus are not paid attention to, although they are located near popular holiday destinations such as Monastir and Mahdia. Some very thick walls managed to withstand the ravages of time and, in the lack of any road signs, they make the visitor understand that he has arrived to the site of an ancient town. 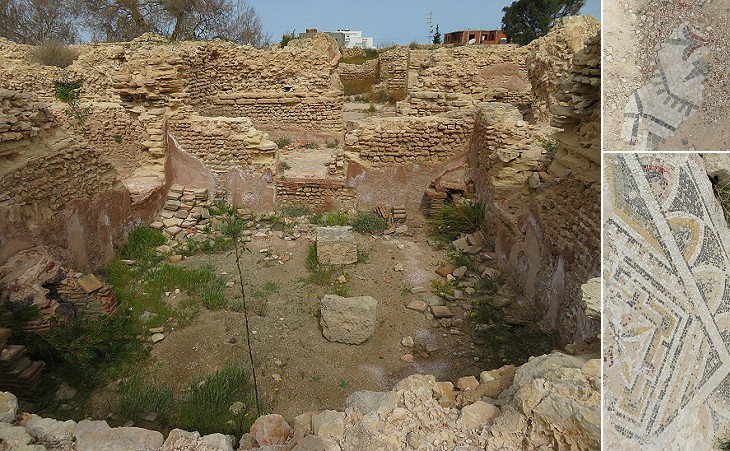 In 1881 Tunisia became a French Protectorate and the description of its antiquities by Guérin prompted a series of archaeological campaigns which initially were carried out by the military. Eventually they led to the identification of some buildings of the town, in addition to those noted by Guérin. In general terms however the site did not attract the attention of archaeologists. 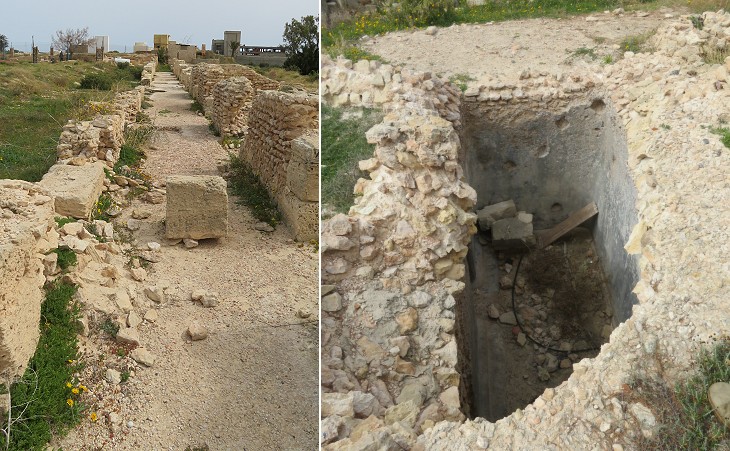 (left) A long series of cisterns; (right) one of them

Guérin mentioned the existence of an aqueduct and of cisterns. Near the baths there is a series of small cisterns, at the end of which there is evidence of a large house.

The principal and only remains, in fact, are those of some large cisterns, a palace or fort, and of an amphitheatre, whose length, extending from N.E. to S.W., measures two hundred and forty feet, and that of the arena one hundred and fifty, whilst its greatest breadth is two hundred, and that of the latter one hundred and ten feet; a small part of the wall inclosing the arena, and faced with large wrought stones, and the inclined supports of the stairs leading to the first gallery still remain. Temple
The ruin of an amphitheatre is situated south of the aqueduct. The arena is farmed, the seating section does not exist any longer. Guérin 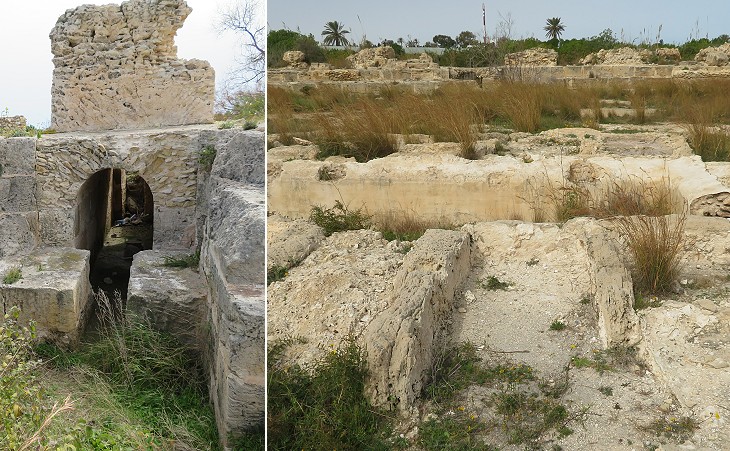 Thapsus was founded by the Phoenicians and it is first mentioned in the IVth century BC. It was part of the Carthaginian territory, but during the Third Punic War it stood on the Roman side and it was rewarded with the status of civitas libera, a free and autonomous city. During the Civil War Thapsus supported Pompey and it was punished with a heavy taxation. Pliny the Elder, who wrote at the time of Emperor Vespasian, mentions Thapsus as an oppidum liberum which indicates a minor town with a degree of self-government. The prosperity of the region which was based on the great fertility of the land favoured the development of the town which in the early IIIrd century had improved harbour facilities. The construction of the amphitheatre testifies to its importance in that period. 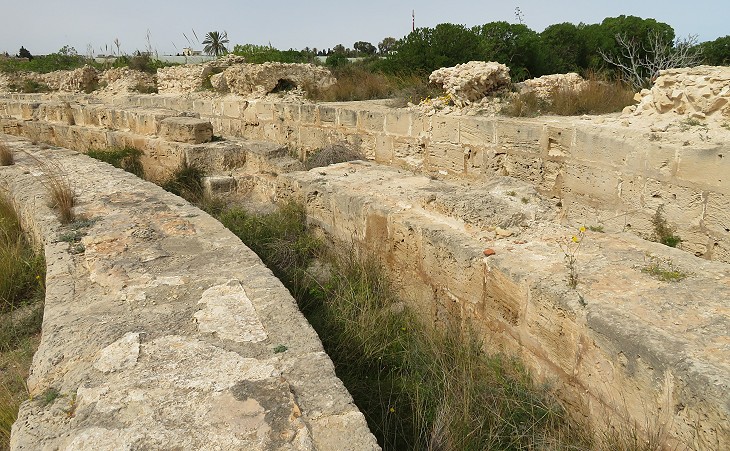 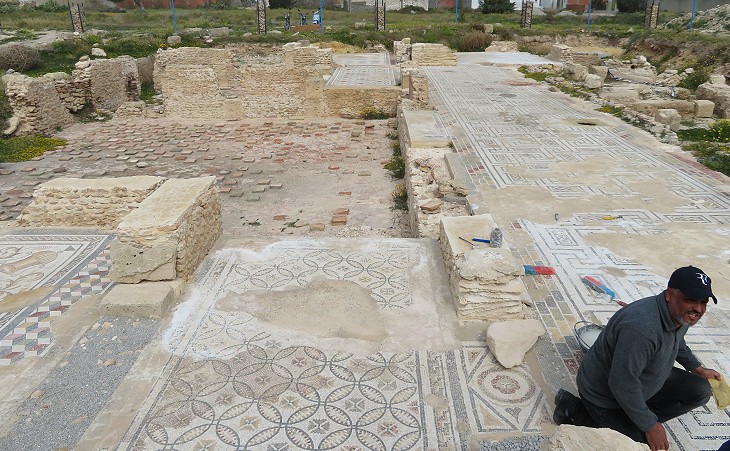 Floor mosaics in the process of being restored

The apparent almost total abandonment of the monuments of Thapsus might end because in March 2019 restoration work was being carried out at a large Roman house near the baths. 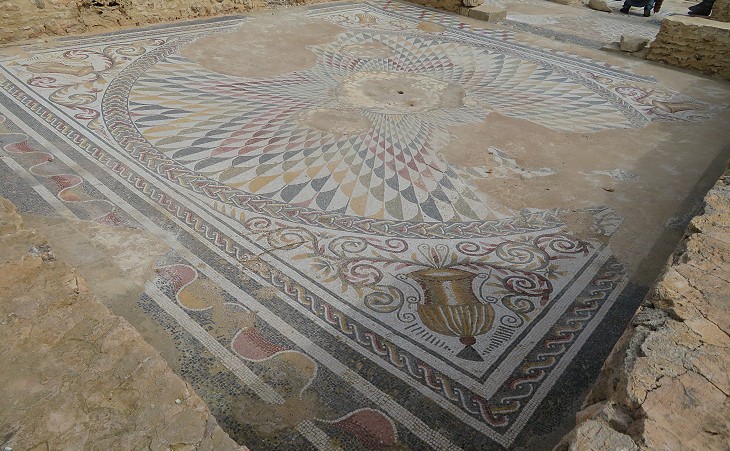 Association de Sauvegard de la Ville de Bekalta (Bekalta being the nearest modern town to Thapsus) supports the initiatives for the restoration of some of the ancient monuments. 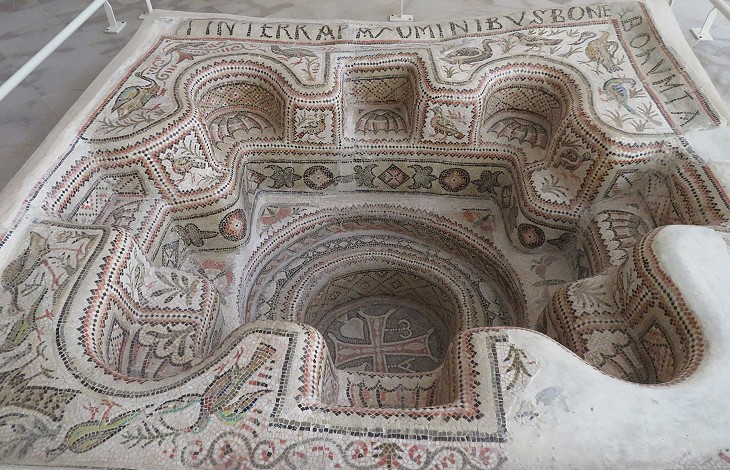 Archaeological Museum of Sousse: baptismal font from Thapsus; its Chi-Rho (a Christogram) can be seen in the image used as background for this page

A Bishop of Thapsus is recorded in 484 when Africa was ruled by the Vandals. In 1993 an extraordinarily fine baptismal font was found at Bekalta. It is likely it belonged to the cathedral of Thapsus. It is dated VIth century and it is generally defined as a masterpiece of Byzantine art, although this type of baptismal fonts is typical of Tunisia. 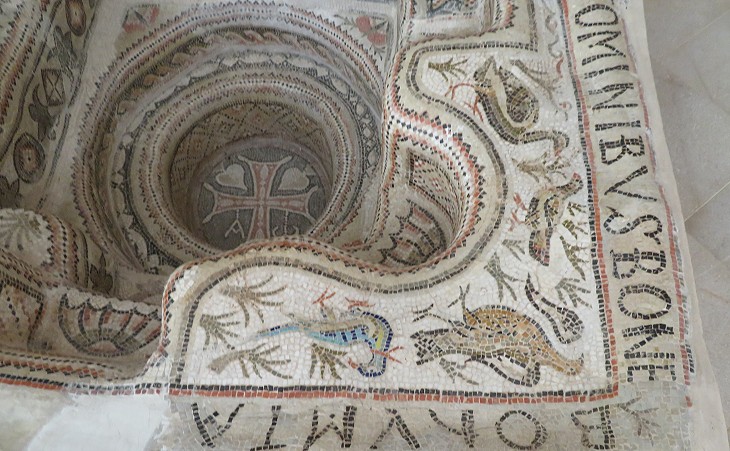 Archaeological Museum of Sousse: baptismal font: detail showing part of the inscription (On Earth Peace to Men of Good Will) with the letter "B" standing for "V" and a "lambda" for "L", in line with the Greek usage

The inscription suggests the baptismal font was made after the Byzantines conquered Africa in 533. You may wish to compare this baptismal font with those of Kelibia and of Sufetula. 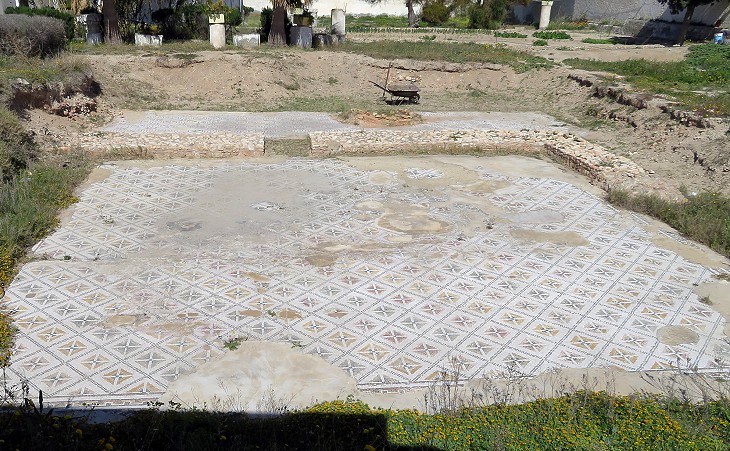 Floor mosaic inside the premises of the Museum

We arrived about noon at Lambtah, a village on the coast. The ruins of an extensive castle, built by the Saracens from the remains of the important city of Leptis, which formerly stood upon this spot, rise picturesquely in the centre of the clustering hovels. Many small articles, such as coins, gems, etc. are found by the villagers, in ploughing the neighbouring fields; and, during our halt, they offered several for sale.
John Clark Kennedy - Algeria and Tunisia in 1845
Leptis Minor (Lesser) is so called to distinguish it from Leptis Magna, a much larger town in today's Libya. Its history is similar to that of Thapsus, which is some ten miles east. It was renowned for its garum, a fish sauce. 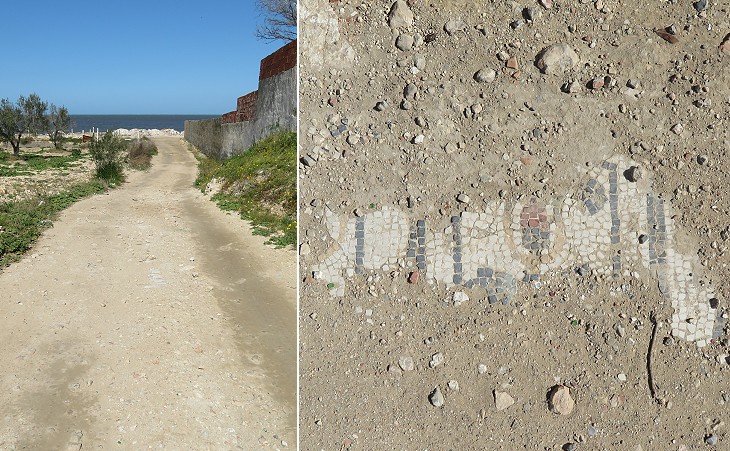 In 1893 the Archaeological Atlas of Tunisia reported the existence of large ruins which were identified as those of a Forum, a theatre, an amphitheatre, baths, town walls, a jetty, a Byzantine fortress, an aqueduct and necropolises. They were all shown on a map. The development of a modern town with a large seaside road had a very negative impact on these ruin. The museum where the most interesting findings were moved was closed for restoration in March 2019 and only some fine floor mosaics were visible from the outside. 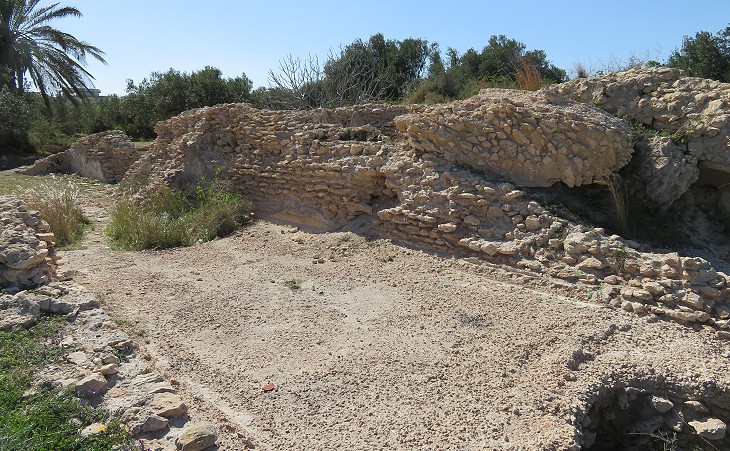 Ruins along the main road opposite the museum