In 1857 French diplomat Charles-Joseph Tissot came to the conclusion that the ruins he visited at Henchir al-Kasbat, thirty miles south of Tunis, were those of Thuburbo Majus.
Henchir is an Arabic word meaning "farm with ruins" and the discovery of many ancient Roman towns was facilitated by their ruins being referred to as henchir. The 1895 Murray's Handbook for travellers in Algeria and Tunisia made reference to Thuburbo Minus, an ancient Roman town in the Mejerda River valley, but ignored the existence of Thuburbo Majus, because at the time the site was yet to be excavated. Archaeological excavations started in 1912; they led to the identification of the Forum and of some large houses decorated with mosaics. Other excavation campaigns were carried out in the 1930s and 1950s, but still a large part of Thuburbo Majus is yet to be freed from the effects of centuries of abandonment. 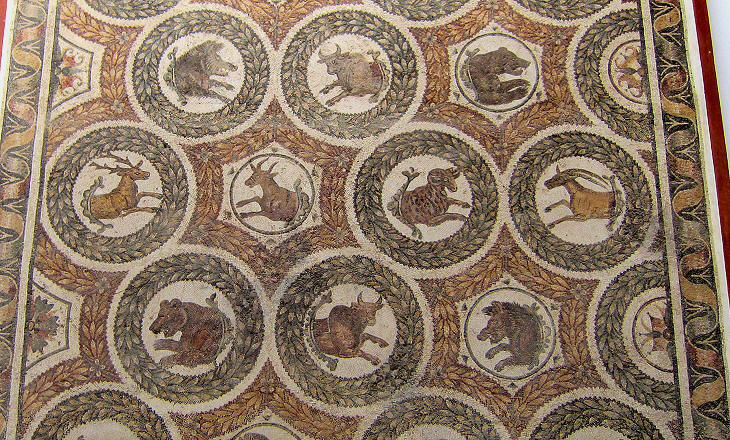 Museum of Bardo: mosaic portraying animals used in "venationes" (slaying of wild animals in the amphitheatres) from the House of the Protomes (busts) in Thuburbo (early IVth century AD). A very similar mosaic was found in the House of the Tied Animals and also at Villa del Casale in Sicily

Unlike those of Sufetula, the monuments of Thuburbo Majus collapsed and archaeologists were not immediately able to assess the level of wealth achieved by the town, although the fact that it was referred to as Majus (major) was per sè an indication of its importance. The floor mosaics of many houses provided archaeologists with the answer they were looking for. They could compete with those found at Carthage, Utica and Hadrumetum (Sousse), the largest cities of Africa, as the Romans called today's Tunisia. 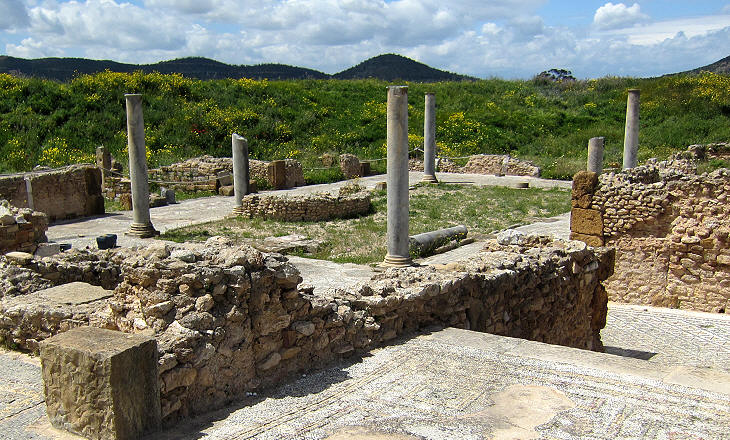 The archaeological area is adjoined by farms and there is not a fence between the two. It is not unusual to see shepherds leading their flocks to graze in the areas surrounding the ancient monuments as shown in the image in the introductory page of this section. In spring wildflowers and green meadows are a pleasant frame for the ancient ruins, but in other seasons they may add to the feeling that the site is not properly cared for. 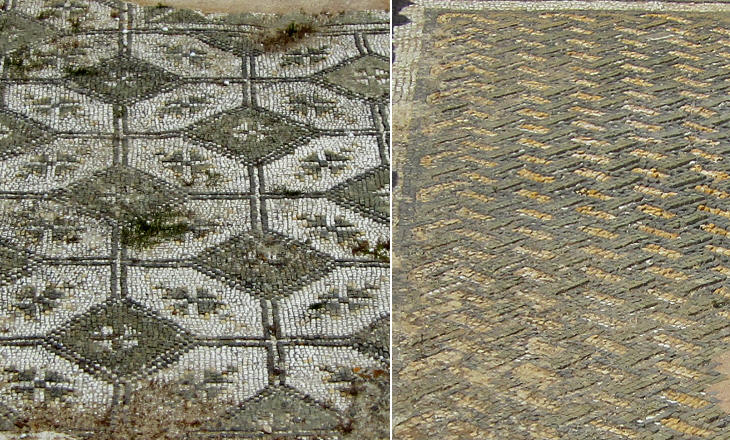 The finest mosaics were moved to the Museum of Bardo in Tunis; the geometric ones were left in situ. The House of the Tied Animals retains a relatively rare example of black and white mosaics; these were very popular in Rome and Emperor Hadrian, a man who did not lack resources, decorated the Hospitalia, the rooms for his guests at Villa Adriana, with black and white mosaics. Probably the wealthy citizens of Roman Africa felt that coloured mosaics best expressed their social status.

During the Third Punic War Thuburbo sided with Carthage and the town was punished by the Romans who imposed a hefty yearly payment as a sign of submission. In 27 BC Emperor Augustus settled some of his veterans in the environs of the town. This led to the creation of two communities; one of peregrini (native freemen) who lived in the civitas (town) of Thuburbo and one of descendants of the veterans who had Roman citizenship and who lived in the pagus, a Roman word indicating a rural district.
The two communities had different laws and local authorities, but over time these distinctions faded away. Emperor Hadrian visited Africa in 128 and he granted the status of municipium to the civitas of Thuburbo, thus giving more rights to its citizens. In 166 the inhabitants of both civitas and pagus erected a temple in the Forum which was dedicated to Jupiter, Juno and Minerva, the three deities which were worshipped on the Capitoline hill of Rome. Public announcements were made from the high podium of the temple. 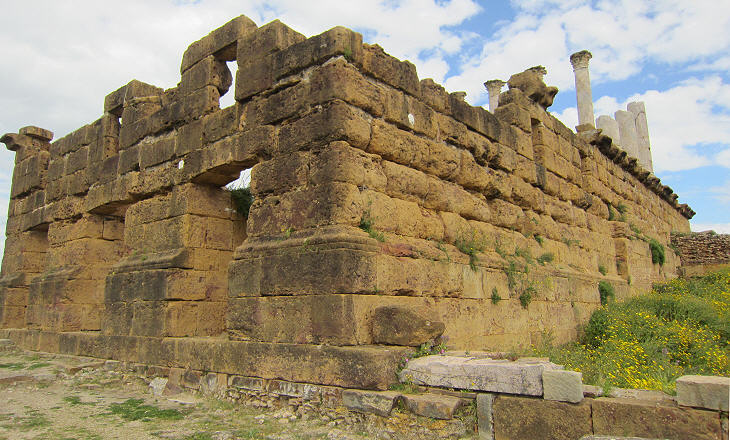 Rear view of the Capitolium

In 188 the process of integration of Thuburbo into the Roman administrative system was completed by Emperor Commodus who unified civitas and pagus into Colonia Julia Aurelia Commoda and granted Roman citizenship to all its inhabitants.
Thuburbo enjoyed a period of great prosperity until the middle of the following century, then something happened which caused its decline. During the IVth century Emperor Constantius II tried to revive the town by restoring some of its public buildings. He renamed it Respublica Felix Thuburbo Majus.

Interior of the Capitolium with an olive press

Several temples of Thuburbo were turned into churches in the IVth century, but rifts among supporters of Donatism, a local Christian sect, and supporters of the official church controlled by the emperors probably caused a new decline of the town. Unlike what can be observed at Thignica and many other locations, there is no evidence of Byzantine fortifications, which indicates that when the Arabs invaded Roman Africa in the VIIth century, Thuburbo was just a village of peasants. 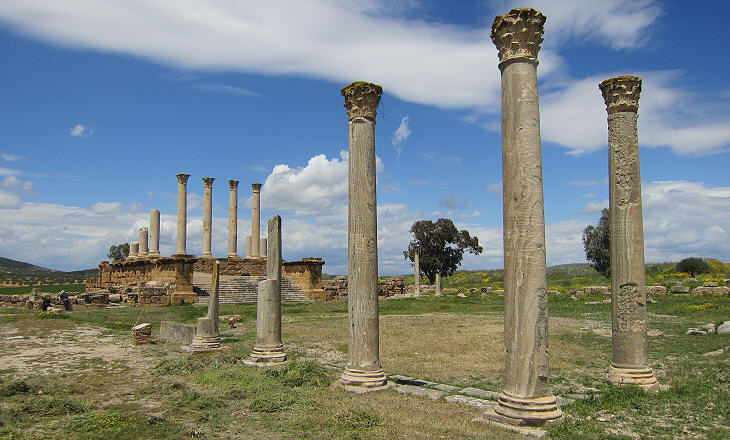 The Forum, the centre of the ancient town, was redesigned at the same time as the Capitolium. It was surrounded by a portico of cipollino columns, a green marble which came from Greece. These columns created a contrast with those of the Capitolium which were of a local pink stone to emphasize the importance of the building. (above) Round peristyle of the Temple to Mercury; (below) section of "Tabula Peutingeriana", a Vth century map of the roads of the Roman Empire; the blue dot indicates Thuburbo Majus and the red dot Carthage

The economy of Thuburbo did not rely solely on farming. The town was located along an inland Roman road which linked Carthage with Algeria and it was therefore visited by merchants. Mercury was the god of trade and in 211 a temple was erected to him next to the Capitolium. It had an unusual shape with a round peristyle inserted in a square space limited by four apses. Temples to Mercury were found also in other towns, e.g. Mactaris and Thugga. 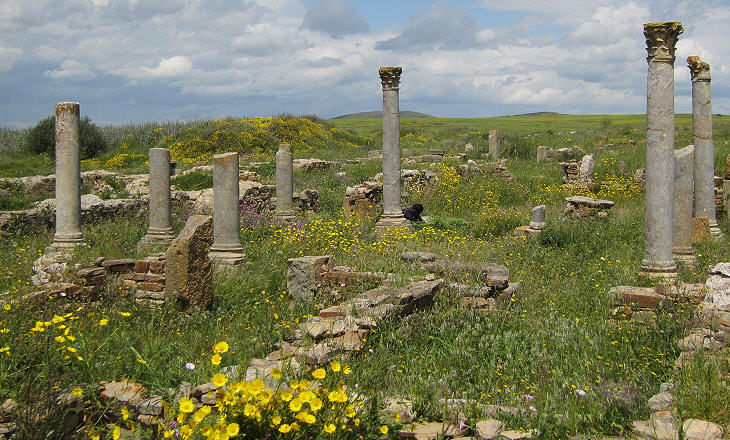 Columns, probably of the Curia, the building where the magistrates of Thuburbo met

The area to the south-west of the Forum is that where the most interesting buildings are located. The area on the other side of the Forum (behind the Curia) was a neighbourhood of workshops and small houses. Today apparently it seems yet to be excavated, but detailed archaeological maps published in the 1960s show that it has already been investigated.

Wandering in the Forum: (left-above) a decorated lintel; (left-below) fragment of a large inscription; (right) relief depicting Pegasus, a symbol of Legio III Augusta, the Roman Legion which was stationed in Africa

The archaeological site of Thuburbo Majus is not complemented by a small museum so reliefs, inscriptions and sections of lintels retaining a fine decoration are scattered here and there, not necessarily on the site where they were found. Museum of Bardo: mosaic portraying Oceanus and other sea creatures from Thuburbo Majus

At many Roman houses in Tunisia, archaeologists have found semicircular basins, usually located in the main courtyard of the building, which are therefore believed to have been fountains, but which at other locations such as at Bulla Regia were used for inside bathing. In most cases these fountains were decorated with heads of Oceanus surrounded by sea creatures; see those at Neapolis and Hadrumetum. 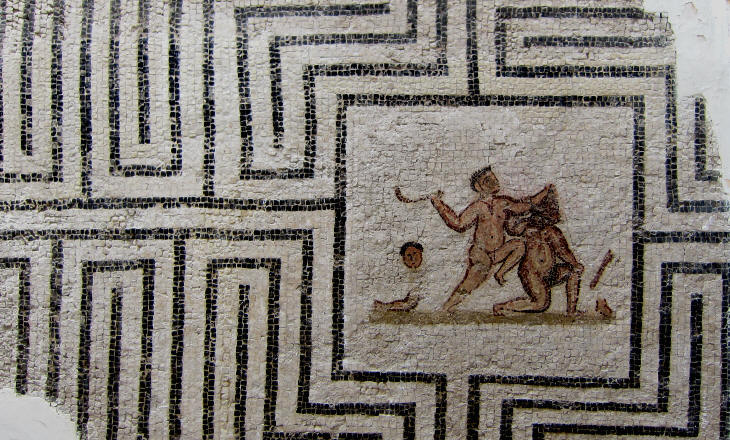 Museum of Bardo: mosaic found at the House of the Labyrinth near the Forum of Thuburbo

The Labyrinth, the maze at Knossos where Theseus slew the Minotaur was a popular decorative motif. Usually mosaicists, as at Sabratha in Libya, did not include the actual scene of the killing, which instead at Thuburbo was depicted in all its violence. See a similar mosaic at Italica in Spain.
Peltas, the crescent-shaped shields of the Amazons were another popular decorative motif for geometric mosaics. You can see them in the image used for the background of this page (House of Neptune). 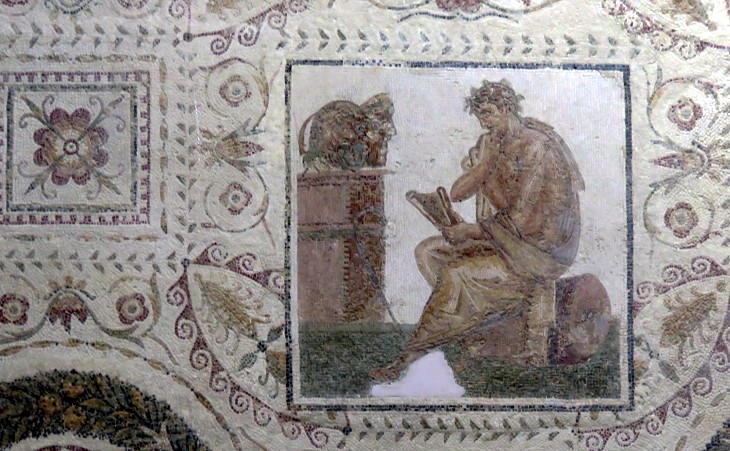 Occasionally the subjects of the mosaics were meant to show the culture of the landlord and his literary tastes. One of the best known mosaics at the Museum of Bardo portrays Virgil in the act of writing the Aeneid . A mosaic found at Thuburbo is believed to portray Menander, a Greek dramatist of the IIIrd century BC whose works were translated into Latin. Perhaps he was not portrayed for his plays, but for a series of maxims attributed to him, some of which are still popular today such as night brings counsel and bad company corrupts good morals (the latter was cited by St. Paul - Corinthians 15:33). 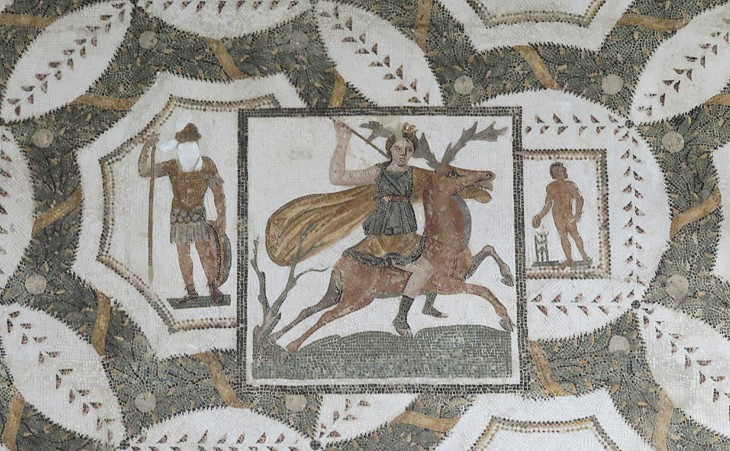 Museum of Bardo: mosaic portraying Diana, a gladiator and a naked man next to a tripod (and other medallions with wild animals) from Thuburbo Majus