- Tunis
(the Great Minaret at Kairouan)

The foundation of Tunis preceded that of Carthage, which is located just a few miles to the north, but for more than a thousand years Carthage was by far more important than Tunis. 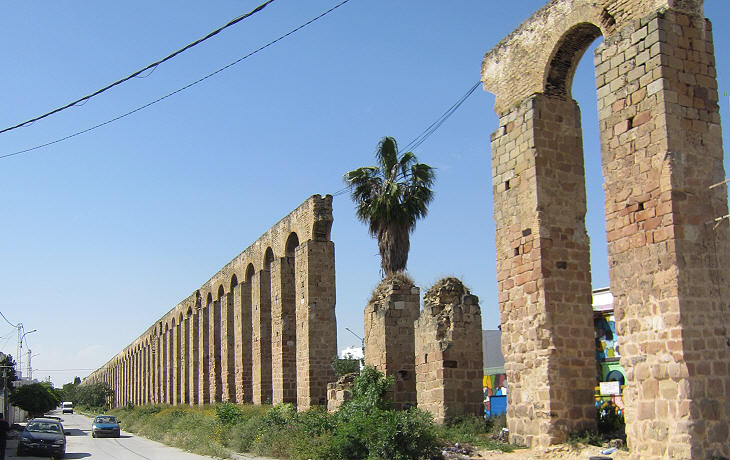 Aqueduct in the outskirts of Tunis near Bab Sadoun

In 692 AD the Arabs conquered Carthage; because they feared that the Byzantines, who had a powerful fleet, could reconquer the city they razed it to the ground and they ruled the country (which they called Ifriqiya) from Kairouan, a new town they founded away from the coast in the south of the country.
After the fear of Byzantine attacks subsided, the Arab rulers realized they needed a large port in the north of the country to replace Carthage and their choice fell on Tunis which was located on a coastal lake with access to the sea. The Roman aqueduct which carried water to Carthage from ancient Ziqua was modified in order to reach Tunis. 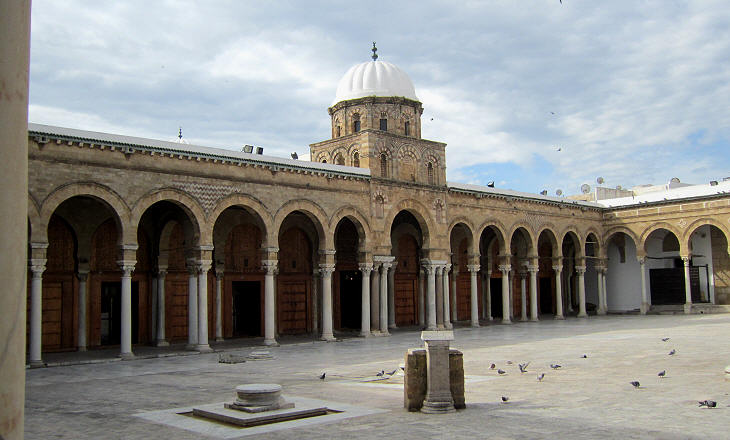 Courtyard of the Great Mosque or Jami' al-Zaytuna, the Mosque of the Olive Tree

The foundation of the Great Mosque on the ruins of a Roman basilica is dated 732. It was entirely rebuilt in the IXth century at the same time as the Great Mosque of Kairouan. The main difference between the two buildings is given by the location and size of the minaret. At Kairouan it is very imposing and it is placed at the middle of one of the sides of the courtyard. At Tunis the minaret was built in the XIIIth century and it was placed in a corner of the courtyard. It collapsed in 1892. 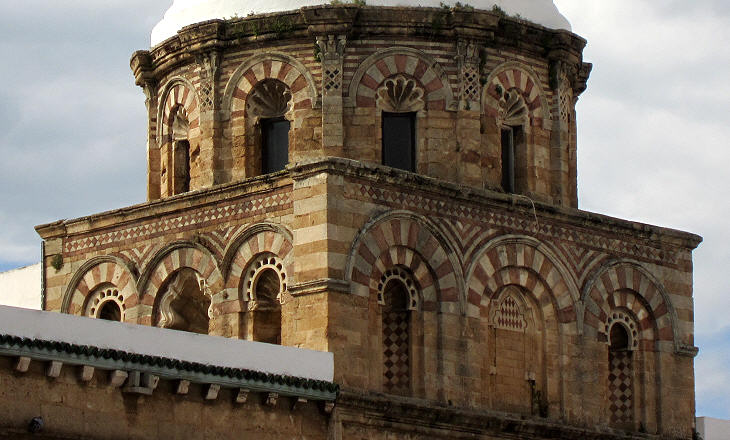 Dome of the Prayer Hall

The principal entrance to the Prayer Hall from the courtyard is marked by a large dome which was added during Xth century renovations. Its tiled exterior features alternating courses of red brick and ochre stone. Its design is typical of the architecture which developed during the Fatimid Caliphate, which incorporated Roman and Byzantine elements. The Fatimids seized power in Tunisia at the beginning of the Xth century and by the end of that century they conquered the whole of northern Africa including Egypt where they founded Cairo, their new capital. 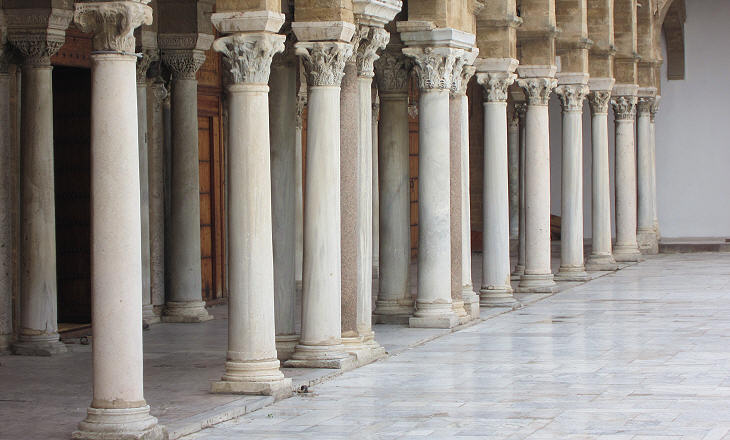 A series of ancient columns

Approximately 160 columns and capitals were imported from the ruins of Carthage to build the Prayer Hall and the portico which precedes it. The architect who designed them was a slave, most likely a Christian slave. He placed the larger and more elaborate Corinthian capitals in the front row and the smaller and simpler Byzantine capitals in the rear row.
Non-Muslims can only access a small section of the courtyard which does not include the portico of the Prayer Hall. 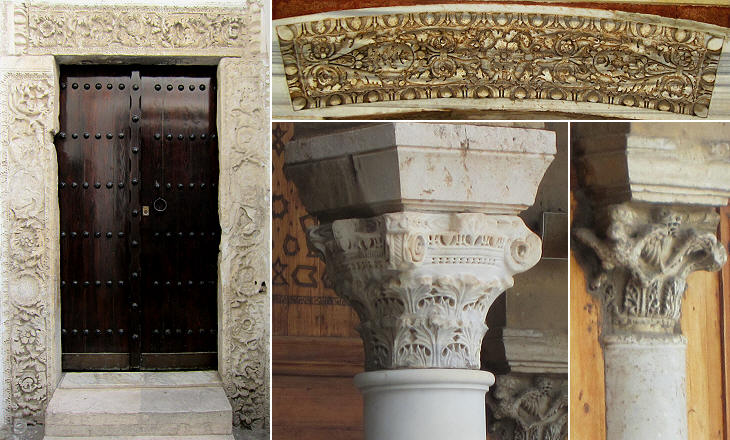 Great Mosque: (left) side entrance reserved to priests; (right-above) ancient relief on the main entrance; (right-below) ancient capitals one of which is decorated with eagles

Some ancient lintels were utilized for the decoration of the mosque, in addition to columns and capitals. The image used as background for this page shows a detail of one of the lintels which frame a side entrance to the Prayer Hall, directly from one of the suqs (or souks) which surround the mosque. The Great Mosque is in the very heart of Tunis and it is surrounded by suqs on every side, unlike the Great Mosque of Kairouan which stands isolated at one end of the city. In the XVth century a small square was created on one side of the Great Mosque to provide it with a main entrance to the courtyard.
In 1894 a minaret was built in a neo-Andalusian style which does not match the overall architecture of the Great Mosque (see page two for an analysis of the minarets of Tunis). 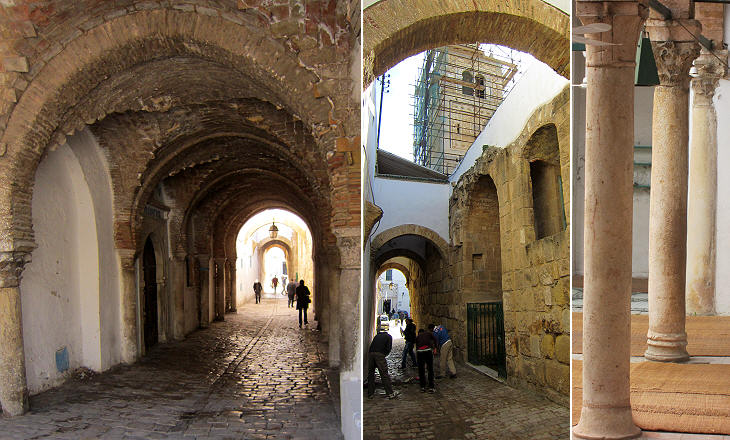 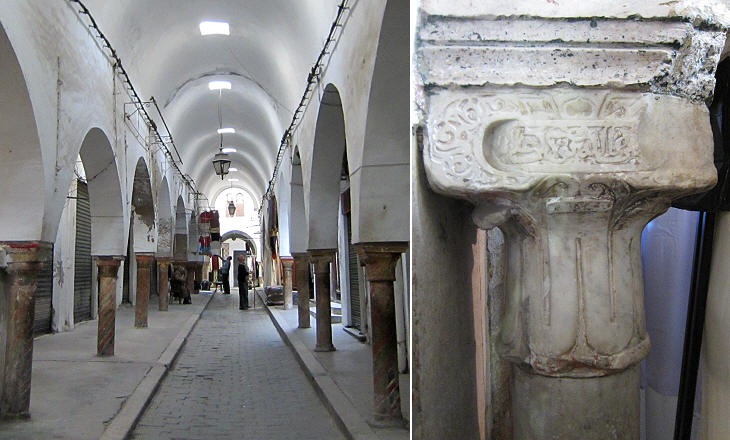 Nothing is more attractive to the stranger than the Native Bazaars, which, amidst all the manifold changes and ameliorations which have taken place around them, still retain their original character. They are narrow and tortuous, well shaded by the houses themselves, and frequently covered with planks or matting. The trades generally keep together, so that the purchaser has the advantage of comparing the various articles of the same sort in one place. The principal are the Souk el-Attarin, or market of the perfumers; Souk el-Farashin, where carpets and all manner of gaily coloured garments are exposed for sale; Souk el-Serajin, or bazaar of the saddlers, full of splendid embroidery on leather; Souk et-Turk, where arms are sold; Souk el-Bey, Souk el-Belad, and numberless others.
1895 Murray handbook for travellers in Tunisia and Algeria
You may wish to see the suqs of Aleppo (photographed in April 2010). 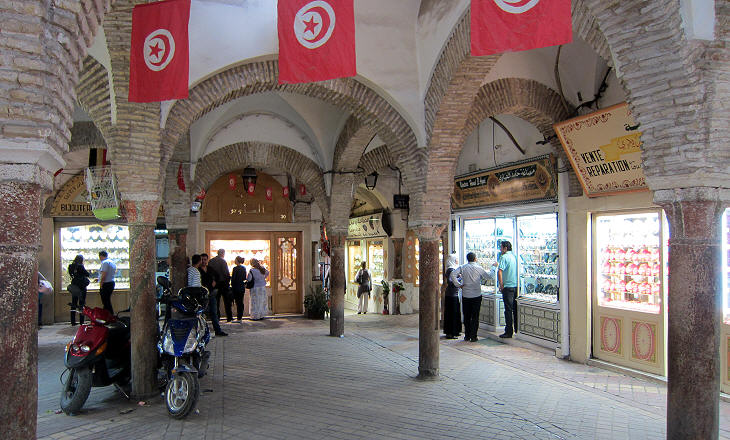 Suq el-Berka (Suq of the Slaves) near the Great Mosque

Slaves sold in Suq el-Berka did not necessarily end up being treated like animals. It all depended on the individual slaves skills.
Thomas Shaw in the introduction to Travels or Observations relating to several parts of Barbary and the Levant (1738) wrote Mr. Sanson who attended for many years the viceroy of Constantina (a town in eastern Algeria which in the past was part of the pachalik of Tunis) as his slave and surgeon supplied me with a great many geographical remarks concerning that province.
Père Dan in Histoire de la Barbarie et de ses corsaires (1637) reported that there was a large chapel outside Tunis where all Christian slaves and free men could go without hindrance to hear mass. He claimed that there was no other place in Barbary where the priests and those connected with the church enjoyed more freedom, and where the Christian religion was better tolerated than at Tunis. 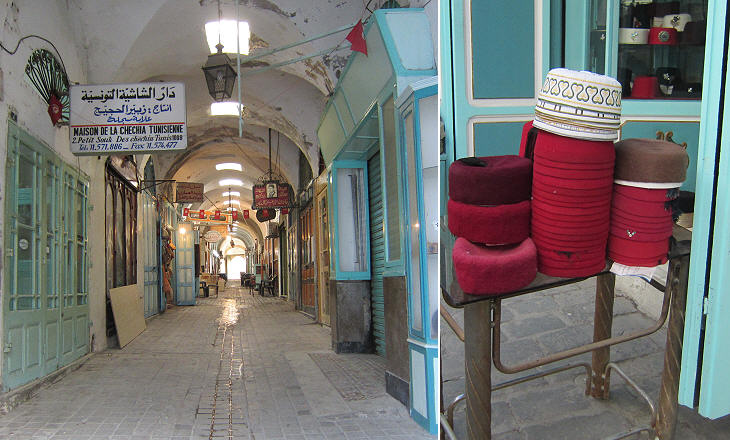 "Chechia", a low red felt hat, is one of the very few typical products one can buy in the suqs

In origin chechia were not visible as they were the support round which a turban was wound.
The Moors and Turks with some of the principal Arabs wear upon the crown of the head a small hemispherical cap of scarlet cloth, another great branch of their woollen manufactory. The turban, as they call a long narrow web of linen, silk or muslin, is folded round the bottom of these caps and very properly distinguishes by the number and fashion of the folds the several orders and degrees of soldiers and sometimes of citizens one from another. Shaw
Chechia did not disappear with the turban, but they are likely to go out of production in the forthcoming years because the new generations of Tunisians regard these unpretentious hats as being old fashioned. 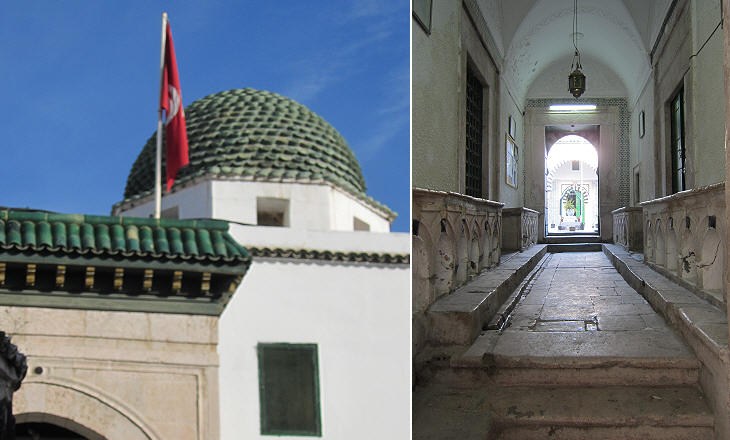 A dome and one of the entrances to the "Three Medreses", near the Great Mosque

The Great Mosque was a sort of Muslim University because many medreses (Koranic schools) were located in the same neighbourhood. The "Three Medreses" were built during the XVIIIth century and they show the influence of Ottoman architecture; access to them is allowed to Muslims only.

Move to page two or to:
Introductory Page
Bizerte
Kairouan
Mahdia
Monastir
Sfax
Sousse
and An Excursion to La Goulette and Sidi Bou-Said