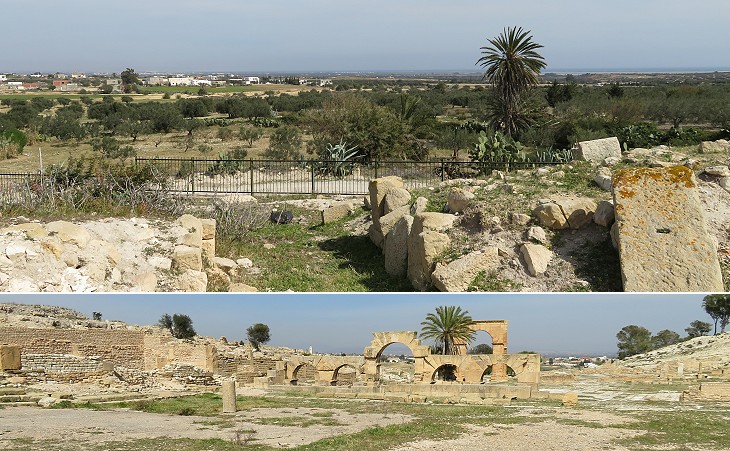 (above) View of the coastal plain from near the baths; (below) view of the main monuments

A little nearer Hamam-et, are the Ruins of a Port formerly belonging to Faradeese, an old Roman City, situated, at a few Miles Distance, upon the N. W. side of This Plain. I was informed, that a Century ago, the Faradesians were the greatest Cruisers and the most experienced Mariners of This Country; but that the greater Increase of Trade, and the more Conveniences for Navigation at Hamam-et, had, of late Years, drawn thither all the Inhabitants.
Thomas Shaw - Travels, or, observations relating to several parts of Barbary and the Levant - 1738 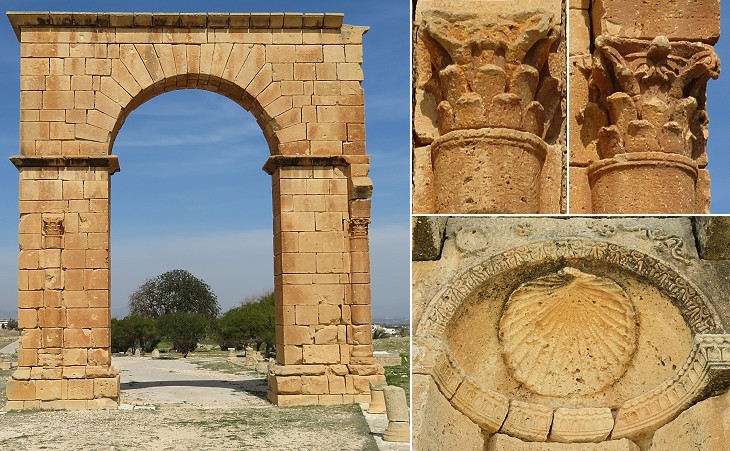 Triumphal Arch: (left) town side; (right-above) details of the capitals; (right-below) niche on the external side

Since the early hours of the day I walked through the ruins of Sidi-Khalifa. Until a century ago they were known as Henchir (field with ruins) Phradisé, but after a mausoleum was built for Sidi-Khalifa, a holy man, the original name was forgotten. The ancient town occupied a hilly area which was divided in two parts by a valley at the centre of which a triumphal arch stood. Its upper part with the inscription is lost. On the external side two finely decorated niches most likely housed statues. (..) It was built with perfectly cut stones which the centuries and the sun of Africa have given that reddish and golden tint which so much adds to the beauty of the ancient monuments.
Free translation from Victor Guérin - Voyage archéologique dans la Régence de Tunis - 1862
You may wish to see other triumphal arches in Africa: at Mactaris, Musti, Sufetula and Thugga in Tunisia, at Cuicul and Thamugadi in Algeria, at Volubilis in Morocco and at Oea and Leptis Magna in Libya. 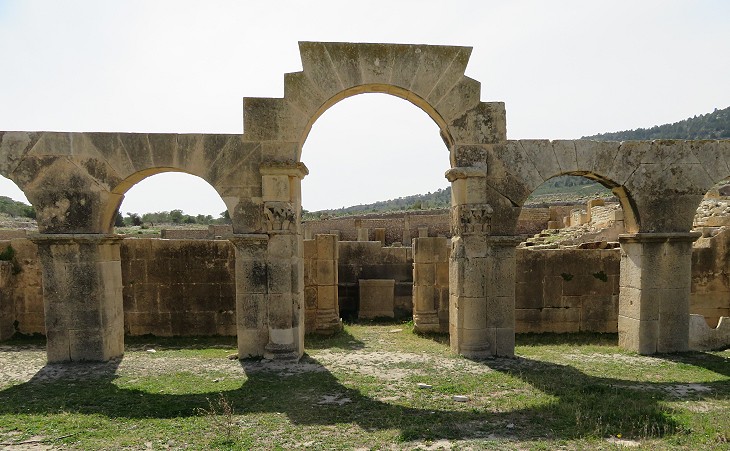 Archaeological campaigns in the 1920s led to the identification and partial reconstruction of a monumental fountain opposite the Triumphal Arch. Fragments of a statue of Neptune were found in the central niche; its pedestal bore the following inscription: Neptuno Aug(usto) sacrum / pro salute Imp(eratoris) Caesaris / Antonini Aug(usti) Pii p(atris) p(atriae) liberorumq(ue) eius / M(arcus) Barigbalius Ghuddis f(ilius) Pheraditanus / maius statuam cum ostiis / ex HS V mil(ibus) n(ummum) sua pecunia fecit / idemq(ue) dedicavit. The inscription, in addition to dating the nymphaeum at the time of Emperor Antoninus Pius, said that the donor was a Pheraditanus Maius, thus allowing the identification of the ruins of Faradeese (Shaw) and Phradisé (Gautier) with Pheradi Majus. 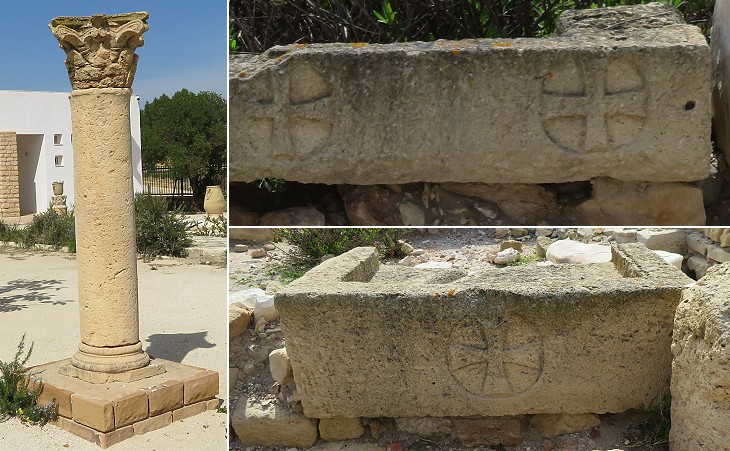 (left) Column with an unrelated capital; (right) stones with crosses in the eastern part of the town

On the eastern side of the town I found evidence of many buildings, including a church. A finely cut stone with a Greek cross carved on it most likely belonged to that church. Guérin
There is little historical evidence of Pheradi Majus, but the presence of two bishops of the town to the 411 Council of Carthage is recorded. Its nearby harbour, perhaps only a small cove, was most likely Aphrodisium, which is mentioned by Ptolemy in a list of ports between Neapolis (Nabeul) and Hadrumetum (Sousse), but in the XVIth century that name was associated with Mahdia, a harbour further south. 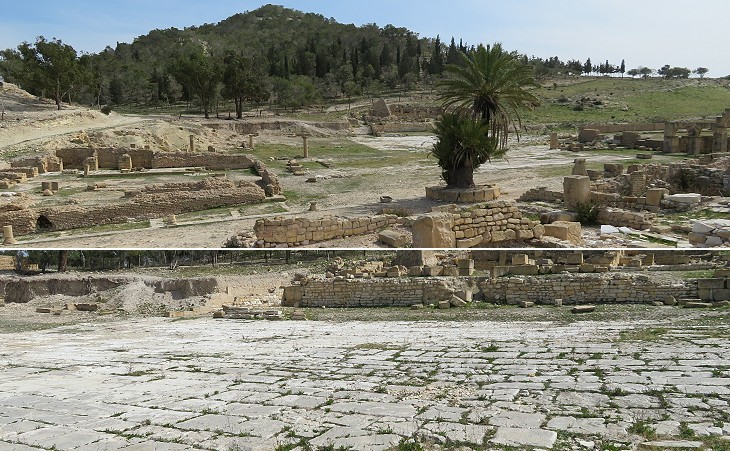 (above) The Forum; at the top of the hill behind it there is a Temple to Saturn which is hidden by trees; these temples were usually built on high ground as at Thugga and Thuburbo Majus; (below) pavement of the Forum

The main public buildings are situated on levelled ground in the valley between the hills. The Forum was very large and archaeologists found its paving in excellent condition; unfortunately, unlike what happened at Hippo Regius, we do not know who paid for it and when it was made. 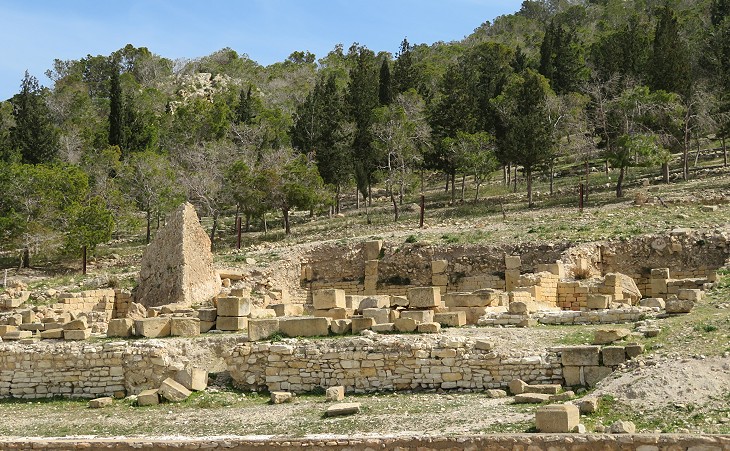 Similar to what can be noticed in almost all provincial Roman towns, a temple in the Forum was dedicated to Jupiter, Juno and Minerva, the three gods who were worshipped on the Capitoline Hill in Rome. Tunisia in particular has a number of Capitolia in pretty good condition, so that we could think that the Capitolium of Pheradi was similar to those at Thuburbo Majus or Thugga, but not to that at Sufetula which is unique. 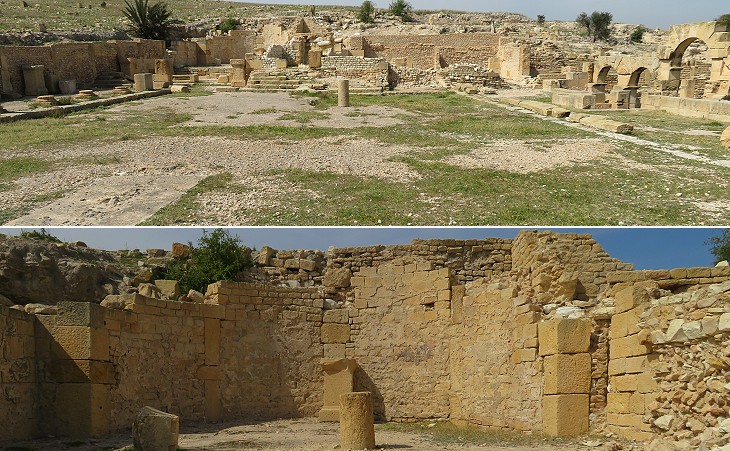 (above) Curia or Judiciary Basilica behind the Nymphaeum; (below) apse of the basilica

The southern part of the Forum was embellished by the Nymphaeum and behind it archaeologists found evidence of the basilica where the members of the local Senate met or where a tribunal was housed. When we think of tribunals of antiquity we usually have in mind the punishment of criminals, but Roman law was also aimed at promoting the economy through commerce and it had many provisions to clearly establish terms of agreements; it included concepts like trust and bona fide (good faith) which are essential for a fair and speedy civilian justice. 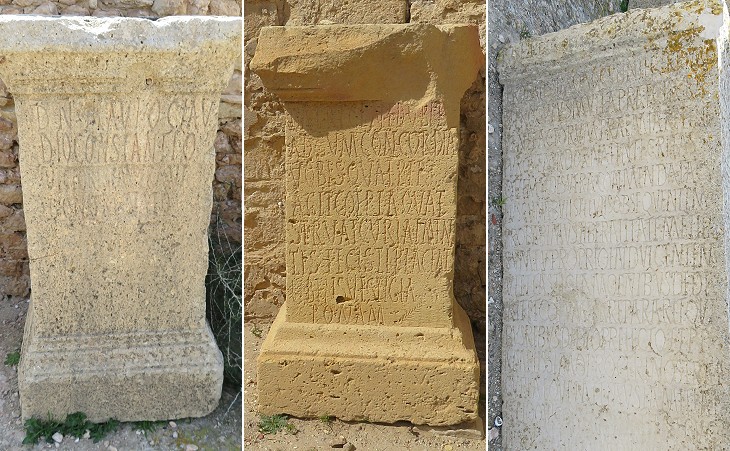 Inscriptions in the Curia celebrating: (left) Emperor Constantius II; (centre) a restoration of the Curia; (right) Didius Preiectus, local "flamen", magistrate in charge of the ceremonies in honour of the emperors

A number of pedestals of statues with inscriptions were found in the Forum and are now on display in the Curia. They are dated IVth century: some of them are dedicated to emperors, while others are extremely long because they expand on the merits of the local citizen who was portrayed in the statue. In 1972 a bath establishment was excavated outside the area of the Forum, in the northern part of the town. The frigidarium retains part of its floor mosaics. The other halls were more damaged by the ravages of time. 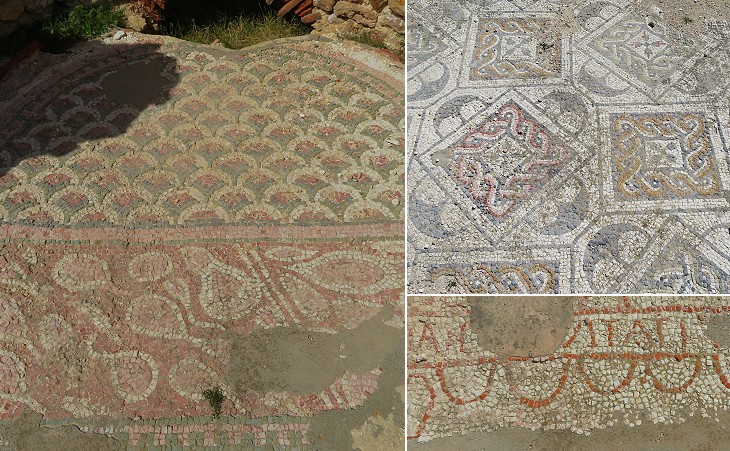 The quality of the decoration, also in the basins of the baths, testifies to the wealth of the town.
Archaeologists found evidence that some of the monuments of the town were damaged by earthquakes. This is indirectly confirmed by the celebratory inscription of Didius Preiectus which says that he gave roofs to the buildings and had the summits repaired. 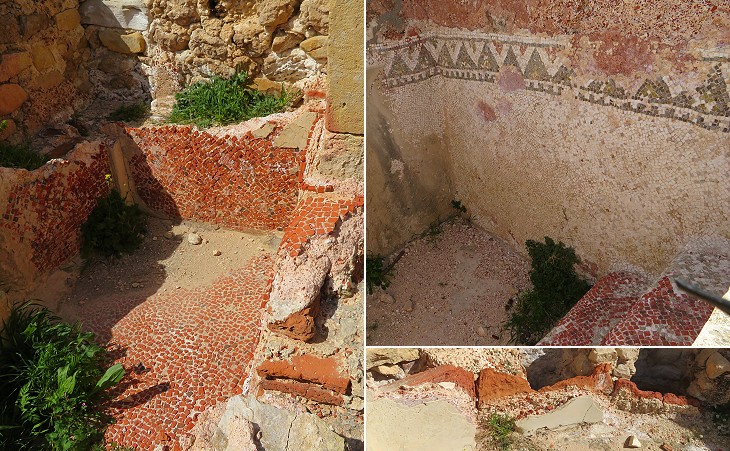 Baths: basins and their mosaic and marble decorations; eventually the practice of decorating these basins was applied to baptismal fonts, e.g. at Kelibia, Sufetula and Thapsus