Sufetula (Sbeitla) - page two
(detail of the theatre at Thugga)

Sufetula is the Tunisian location which retains the largest number of early Christian monuments. This because in the VIth century it became the most important town of Valeria Byzacena, the province created in Central Tunisia by the territorial reforms introduced by Emperor Diocletian in 285-292. The capital of the province was Hadrumetum (today's Sousse), but it lost importance in favour of Sufetula, where new churches were built until the VIIth century. 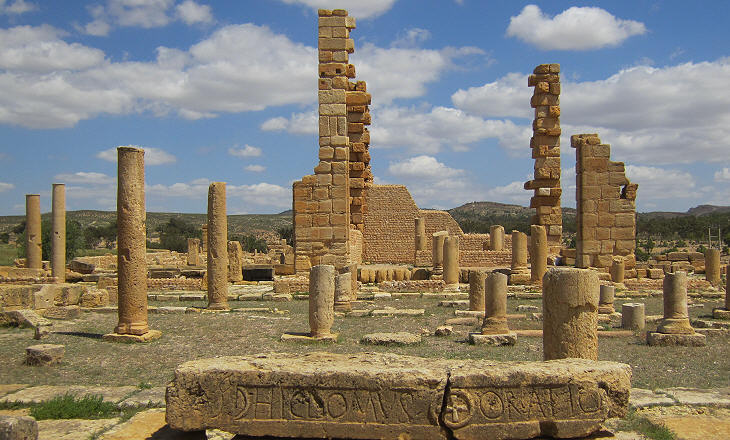 Church of Servus; in the foreground lintel of the entrance gate with the inscription "Hic Domus Oratio(nis)" meaning "This is the House of Prayer"

The Church of Servus (thus named after an inscription) was one of the earliest ones and it is situated between the Forum and the Great Baths. It had five naves and it was built using the columns of a Roman courtyard which preceded a temple. Archaeologists believe that it was the Donatist cathedral of Sufetula. Donatism was a Christian sect which flourished in the IVth century in Northern Africa. It probably had some ethnic/territorial roots as it was more popular in inland towns than in coastal ones. In 411 Emperor Honorius issued decrees punishing the members of the sect, which however is believed to have survived until the Arab invasion in the VIIth century. Church of Bellator: (left) apses and in the foreground holes where wooden structures were placed; (right) details of its floor mosaics

The area to the north of the Forum houses several Christian churches and chapels which were all built on the site of previous temples and public buildings. It is interesting to note that it does not appear that the Capitolium was turned into a church which indicates that it was regarded more as a monument to the State than to pagan deities.
The church of Bellator (after the name of a local bishop) was built in the IVth century as the cathedral for the orthodox community. It was modified in the following centuries when new apses were added. Baptistery of Bellator or Chapel of Jucundus

The peristyle of an adjoining building which likely housed a fountain at its centre was turned into a baptistery, which later on became a separate chapel. It is named after Jucundus, a bishop of Sufetula who attended a council at Carthage in 411. At that council (St.) Augustine, Bishop of Hippo Regius, today's Annaba in eastern Algeria, claimed that Donatists should be regarded as heretics and his position was eventually adopted by the chairman of the council, an envoy of Emperor Honorius. 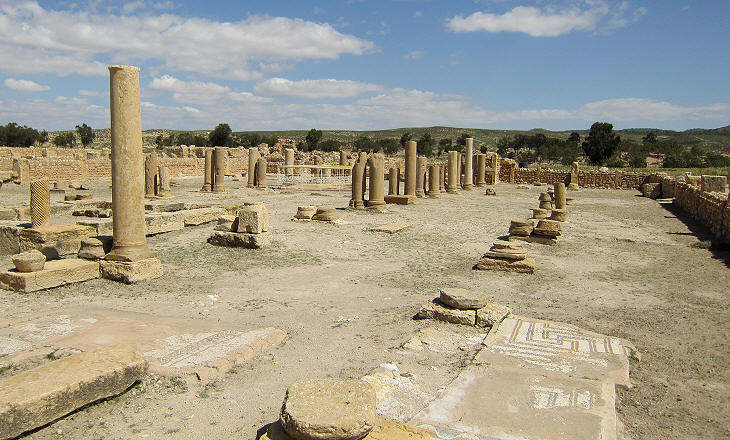 A second large church was built near that of Bellator. Similar to that of Servus it has five naves. It has two opposite apses, the smaller one was probably used for funerary ceremonies. Some sources date it late Vth century/early VIth century which would mean it was built during the Vandal occupation of the country. The Vandals were Arians and perhaps the basilica was their cathedral. You may wish to see the Arian Baptistery of Ravenna. 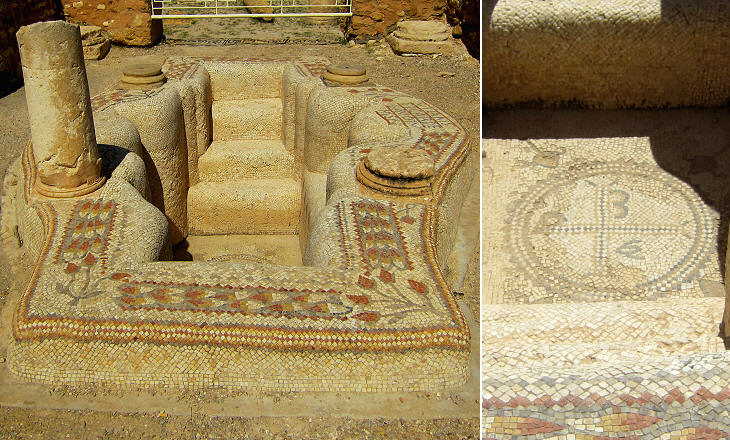 The basilica is named after one of the donors of its baptismal font who is mentioned in an inscription. The font was decorated in fulfilment of a vow and was completed by a canopy supported by four columns. With those of Kelibia and Thapsus it is the finest example of baptismal fonts found in Tunisia.
Baptism was a key sacrament for the early Christians and St. Augustine wrote a treatise to prove that the Donatist position on baptism was wrong. In particular he condemned the Donatist practice of baptizing a second time those who returned to the Church after having abandoned it. 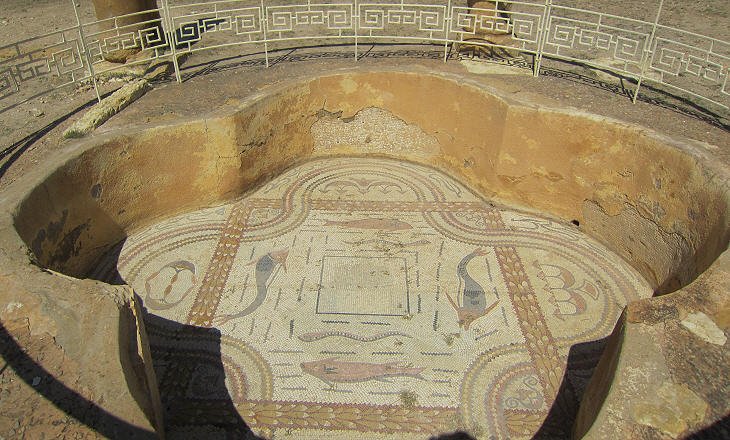 Basin near the Basilica

Archaeologists have found a second basin near the Basilica of Vitalis. Its origin and purpose are not fully explained. The four lobes could be interpreted as a reference to the Cross and the fish of the mosaic as Christian symbols, but most likely it was a decorative fountain at the centre of a Roman peristyle. The image used as background for this page shows one of the fish. 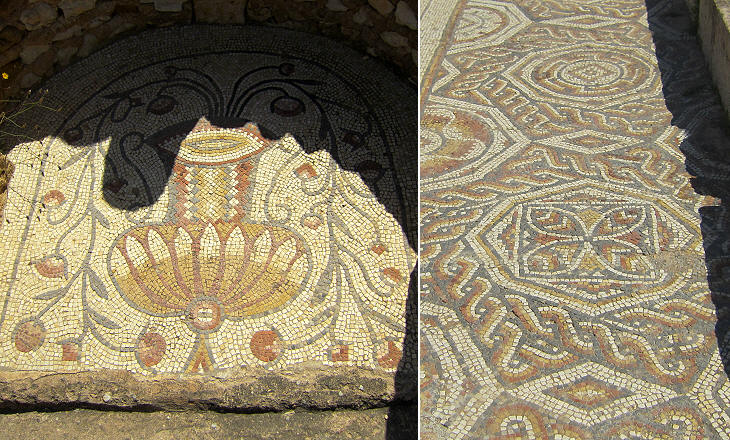 The mosaics which decorated the Christian monuments of Sufetula were geometric ones with very few exceptions such as the kantharos in the baptistery of Bellator. This jar was a symbol of Dionysus, the Greek god of wine. It was often depicted with a grapevine growing from it, as in some Roman baths along Via Appia and in a fine mosaic at Thysdrus. It was adopted by the early Christians as a symbol of life with apple trees replacing grapevine. You may wish to see a similar Christian mosaic which was found near Uppenna.

In 646 Gregory, the Exarch (governor) of Byzantine Africa, rebelled against Emperor Constans II on religious grounds. It was a very difficult moment for the Byzantine Empire: Egypt and Syria had just been conquered by the Arabs. In 647 Arab raiders invaded Africa and Gregory tried to check them at Sufetula, but he was killed and the town was plundered. Eventually the Arabs agreed to withdraw from the province, but a few decades later they returned and conquered it for good.
The process of Arabisation of Tunisia was not completed until the XIth century when the Banu Hilal invaded the country. They were Bedouin tribesmen from Arabia and they spread nomadism where agriculture had been dominant.