- Volubilis: Main Monuments
(detail of a mosaic from Volubilis at the Museum of Tangier) 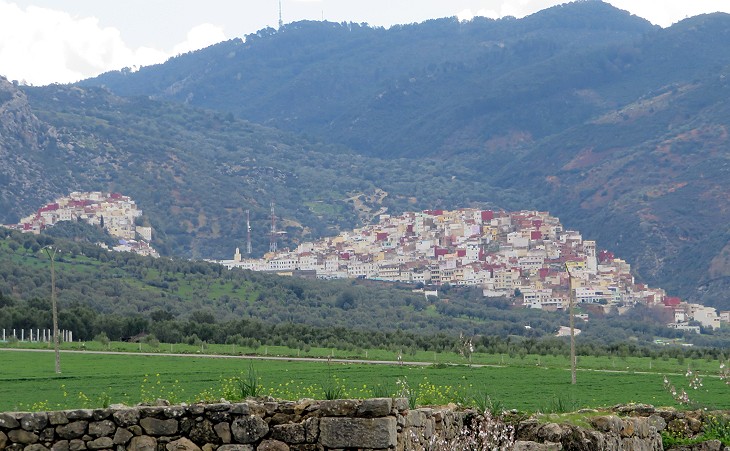 The identification of an ancient city is always a matter of great interest, and with this object in view, I carefully examined the remarkable ruins called Cassar Pharaon (Pharaoh's Castle), situated about twelve miles north-east from Mequinez (Meknes), and about twenty-eight miles north-west from Fez. The ruins lie out of the direct road to either of these places; but the fact that they have been so seldom visited by Europeans is due not so much to this circumstance as to the extreme jealousy with which the adjacent Zaouia or sanctuary of Muley Edris is guarded. Rohlfs (Gerard Rohlfs, a German geographer), who travelled as a Mussulman, and was thus able to enter the sanctuary, makes no mention of the ruins. He says, in connection with his visit, that he was "always looked upon with distrust - to ask directly about any place would not do at all, I should have been at once denounced as a spy." (..) This Muley Edris was the father of him of the same name by whom the city of Fez was founded. The town in connection with the sanctuary is placed on the southern declivities of two cone-shaped elevations of a mountain called Zarhoun.
Arthur Leared - Marocco and the Moors - 2nd edn. 1891 which included an account of a visit to Volubilis which was published in The Academy, a review of literature and general topics, in 1878. 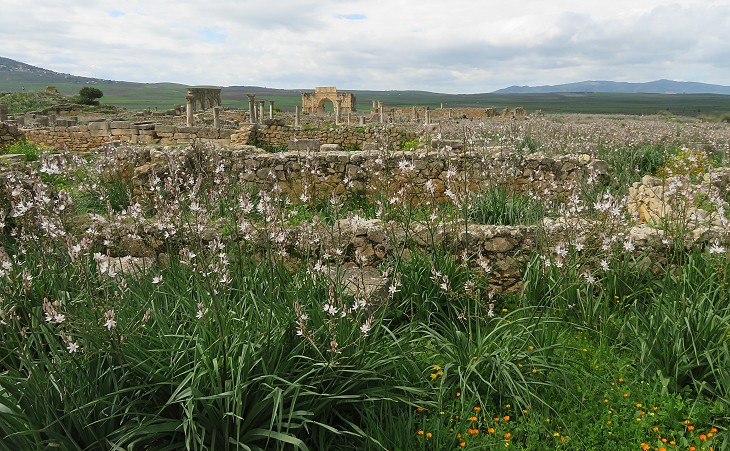 This towne was founded by the Romans upon the top of an hill. (..) The people of this said mountaine, together with some historiographers are most certainly perswaded, that this towne was built by Pharao king of Egypt in the time of Moses, and tooke the name from the first founder, which notwithstanding I thinke to be otherwise: for I can read in no approved author that either Pharao or any other Egyptians ever inhabited these regions. (..) I am rather of opinion, by the Latine letters which are there engraven in the walles, that the Romanes built this towne. (..) The little hills and vallies adiacent doe greatly abound with olives.
Leo Africanus - The history and description of Africa: and of the notable things therein contained - 1526 - 1600 translation by John Pory
The ruins are situated at a distance of about two miles from the town upon a level platform in part supported by a wall, beyond which the ground slopes abruptly towards the south. To the west of the ruins, blocks of hewn stone are scattered over a considerable space, with here and there Roman carved work in scrolls, and egg and tongue (aka as egg-and-dart) patterns, etc. All these stones, as well as those of the standing portions of the buildings and of the tombs, are of the same material - namely, grey limestone. The ruins appear to belong to the late Roman period. Leared 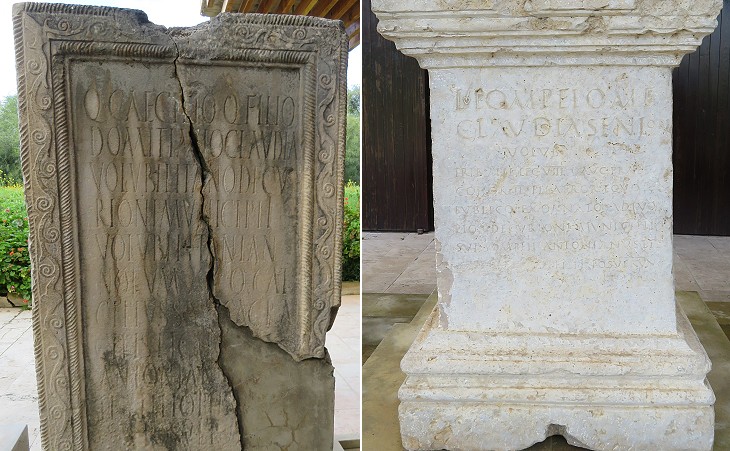 The abrupt slope has upon it several tombs, apparently still intact. (..) The thick slab is about five feet long by three feet wide, and is badly fractured longitudinally. The inscription is contained withi n a border of scroll-work ornament. (..) The reading of this by Prof. Mommsen (Theodor Mommsen, 1817-1903, a German historian and archaeologist, who initiated the systematic recording of all ancient Latin inscriptions), is: Q(uinto) Caecilio Q(uinti) filio Domitiano Claudia Volubiliano, decurioni municipii Volubiliani , annorum XX, Q(uintus) Caecilius (et) Antonia N(ata)lis filio pii(ssiimo) posueru(nt)." The circumstance that the monument is in memory of a native of Volubilis, and one of its municipal officers, affords strong presumptive evidence that it was placed at Volubilis. Leared 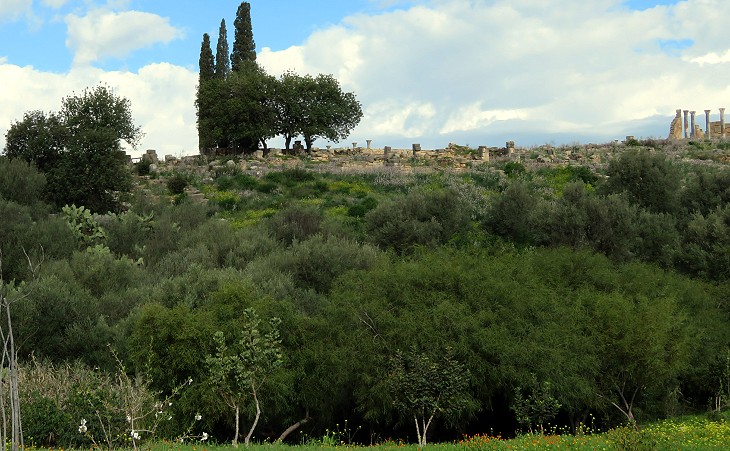 The position of the ruins is one admirably adapted for an important city. It commands a fine view over an extensive and fertile plain. It is central as regards the northern portion of Marocco, and on the direct road to many of the remoter parts. Leared 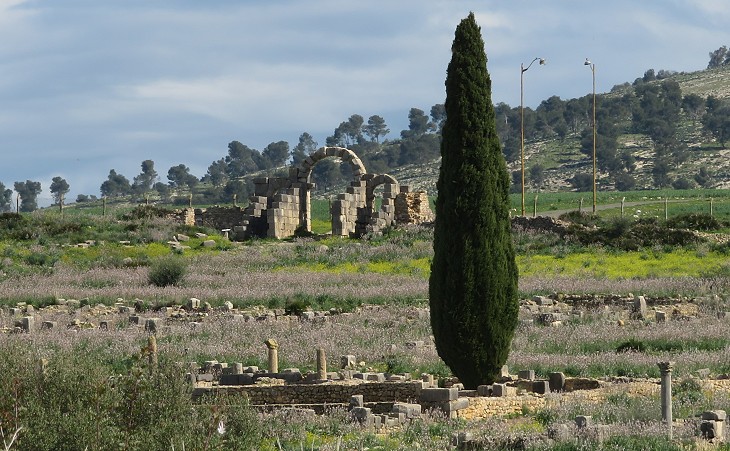 The main gate of Volubilis was situated at its north-western end. It was the entrance of the road from Tingis, the capital of Mauretania Tingitana, the province which included the town. The road continued southwards beyond Volubilis and it ended at a fortified site at the foot of the Atlas Mountains which were the natural limit of the Roman territories. The monuments and rich houses of the town indicate that its economy could rely on substantial revenues, most likely from the sale of olive oil. It is possible that the capturing of wild beasts on the nearby mountains was another source of income; they were sold to organizers of venationes (fights between men and beasts) in the amphitheatres of the main cities of the Empire. 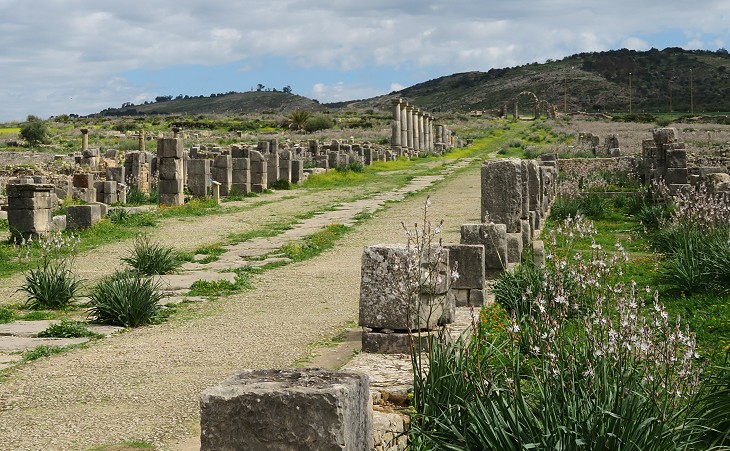 Decumanus Maximus was the main street of Volubilis; it had an east-west direction and from the Gate of Tingis it reached the centre of the town where the main public buildings were situated. The most prestigious houses were situated alongside Decumanus Maximus, behind rows of shops that lined the street under an arcade. They were entered from side streets between the shops. This set up was most likely developed after the construction of the walls and gates at the time of Emperor Marcus Aurelius. 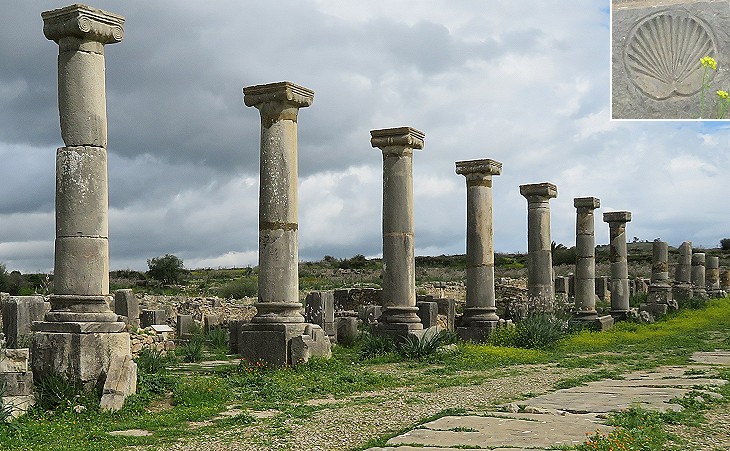 The most imposing building along the Decumanus is named after Gordian, either Gordian I, Roman proconsul of the Province of Africa and Emperor in 238 or his grandson Gordian III. There is no specific evidence that they ever lived at Volubilis, but it is possible that the building was the residence of a high Roman officer at their time. Notwithstanding its imposing colonnaded front the large structure was not decorated with elaborate floor mosaics, which instead have been found in many private houses of the town. 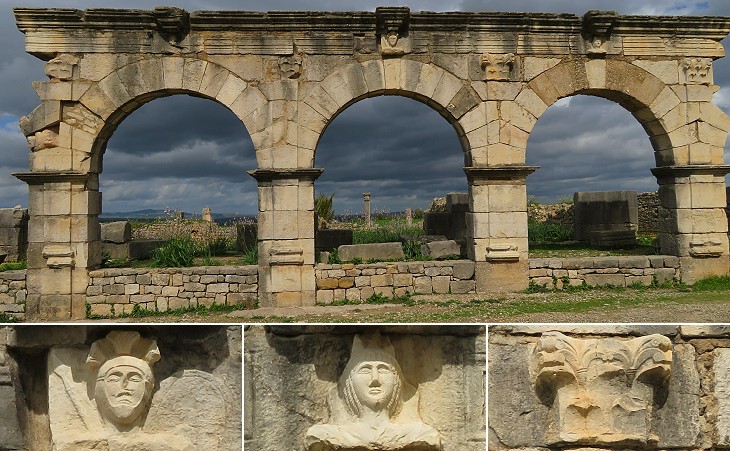 (above) Reconstructed portico along Decumanus Maximus; (below) details of its decoration

The Decumanus was at least in part flanked by a portico sheltering shops and inns. A section of the portico has been reconstructed; it was decorated with slightly projecting pillars, a typical feature of Roman architecture, and with two reliefs which are assumed to represent Africa and Rome. 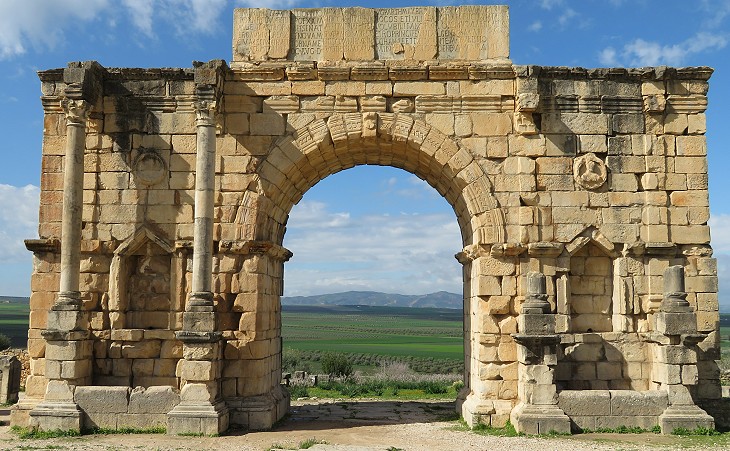 Arch of Caracalla (reconstructed in 1931 without its upper section)

At a distance of 100 yards (from the Forum) stand the remains of an arch. The archway was twenty feet wide, and from the massiveness of the structure and from the circumstance that its back and front were alike, it was probably a triumphal arch. This was the opinion of Windus (John Windus, a British diplomat who visited the site in 1721), whose drawing of it represents the arch as unbroken. Leared 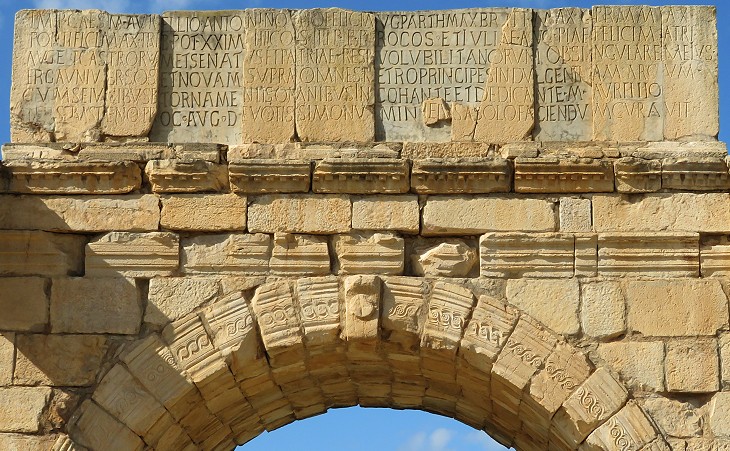 Arch of Caracalla: inscription (it was most likely inserted in a frame)

Underneath it, Windus found six fragments of stones that contained portions of inscriptions (also figured by him), which he says, "were fixed higher on the arch than any part now standing." A portion of one of these fragments was identified by me. The remainder probably lie buried in the debris of the fallen arch. The fragment I saw contained slender-shaped letters about six inches in length. All the portions of inscriptions figured by Windus were too fragmentary for anything to be made out of them, and he made no attempt of the kind. Leared
The inscription was completed by comparing its remaining fragments with the text of other inscriptions chiefly that on an arch at Cuicul (today's Djemila in Algeria) which was dedicated to Caracalla and Julia Domna, his mother.
You may wish to see other triumphal arches in Africa: at Mactaris, Musti, Pheradi Majus, Sufetula and Thugga in Tunisia, at Lambaesis and Thamugadi in Algeria and at Oea and Leptis Magna in Libya. 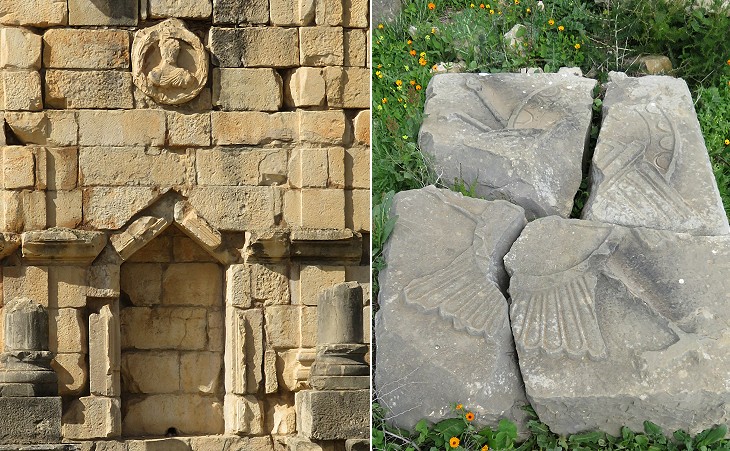 Arch of Caracalla: (left) detail with a medallion showing one of the Four Seasons; (right) fragment of a relief depicting a military trophy

Many pieces of pilasters, pillars, and Corinthian capitals are strewn about the platform. (..) A mutilated bust in bas-relief, figured by Windus, is also still to be seen. Leared
Some of the reliefs were placed back on the arch, although not in their original location, others lie on the ground near the monument. The depiction of the Four Seasons is a tribute to the importance of agriculture in the economy of Volubilis. The exact event which prompted M. Aurelio Sebasteno, a local officer, to erect the arch in ca 217 is not clear. 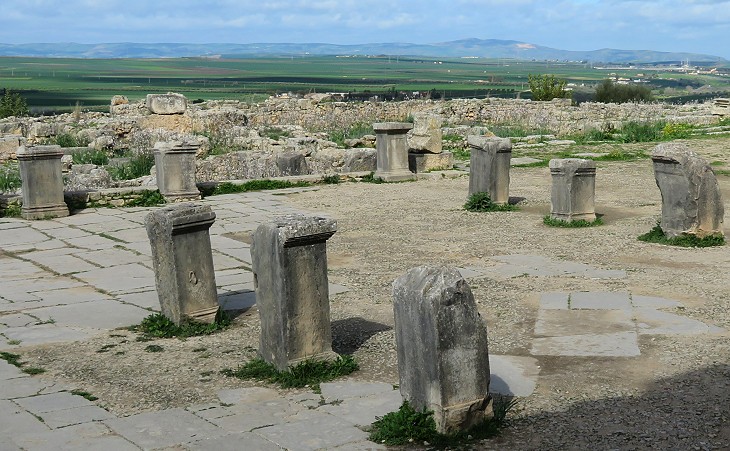 The arch is placed at a slight angle with the Decumanus Maximus and it probably served as monumental access to a part of the town which was destroyed in the following centuries. The site of the Forum has been identified to the south of the arch, but it is not visually linked to it. In the area of the Forum archaeologists found evidence of a public bath establishment and of an aqueduct which supplied the town. One of the ruins consists of the remains of a building which measured externally thirty-six yards in length by twenty yards in breadth. Two large archways still exist in the portions of the walls that formed the ends of the structure. (..) The southern wall, of which most remains, is about forty feet in height. Leared
The Basilica and the Arch of Caracalla were the only buildings of Volubilis which were clearly identifiable before French teams undertook the first archaeological campaigns in 1915-1917. The Basilica housed the local tribunal, but it also served for business and political gatherings. It was a rectangular building divided into three naves with apses at the two short sides. 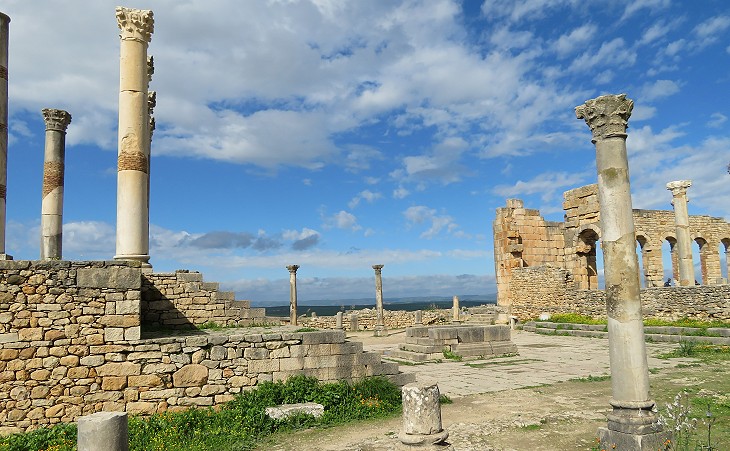 The Forum included a temple dedicated to Jupiter, Juno and Minerva, the three gods who were worshipped on the Capitoline Hill of Rome. It was preceded by a square with a small altar, which might have existed before the development of the Roman town. The Capitolium was most likely erected soon after the Romans established their direct rule on the region, but the building which was unearthed and partially reconstructed by archaeologists was dedicated to Emperor Macrinus who killed Caracalla in 217. 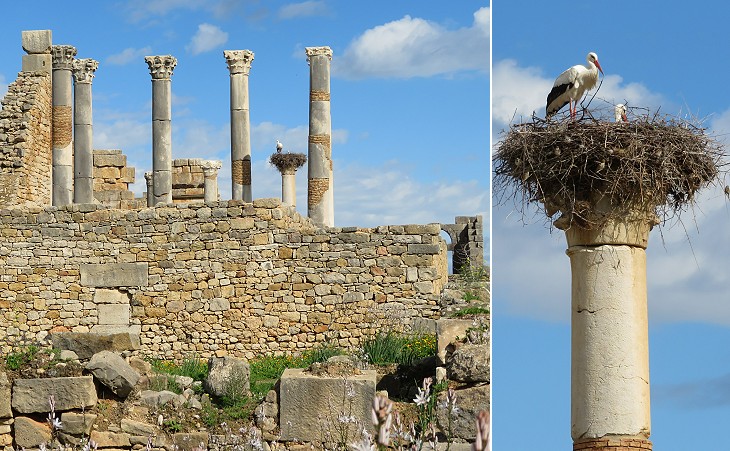 (left) Capitolium; (right) Moroccan storks show their penchant for ancient columns as their Turkish cousins do at Silifke and Ankara

The Capitolium was most likely the last public building erected at Volubilis. The long period of military anarchy which affected the Roman Empire after 238 came to an end when Emperor Diocletian took power in 284. His decision to redesign the administration of the Empire and its borders led to the exclusion of Volubilis and Sala Colonia from the territories protected by the Roman army.
The town continued to be inhabited, but its population and economy declined and parts of it were abandoned.
The image used as background for this page shows a detail of a capital near the Capitolium.


Move to:
Introductory page
Sala and Chellah
Lixus
Tangier and other Roman towns