- Leptis Magna: Age of Septimius Severus
(Detail of a mosaic from Leptis Magna in the Museum of Tripoli)

You may wish to see page one first. Leptis saw a period of great development in the early IIIrd century AD when Lucius Septimius Severus, one of its citizens, became emperor. 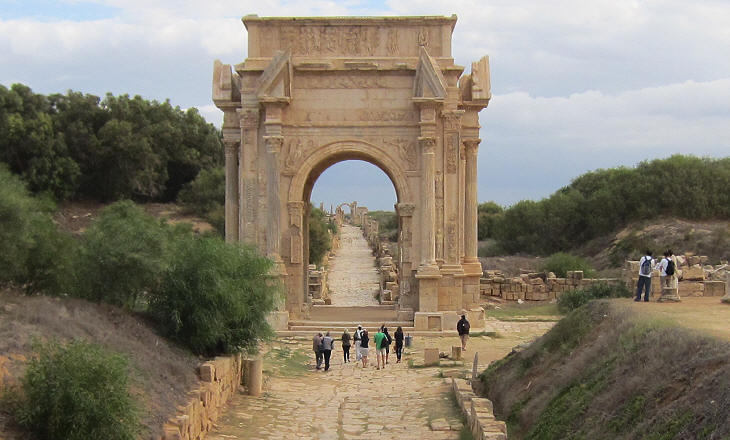 Arch of Septimius Severus at the beginning of the "cardo"

In 203, on the occasion of the Emperor's visit to his hometown, an arch was erected in his honour at the beginning of the cardo, the main north-south street of Leptis; its design was very different from that of the arch erected to the Emperor in the Roman Forum, but it was similar to the arch of Marcus Aurelius at nearby Oea, which had four almost identical sides. 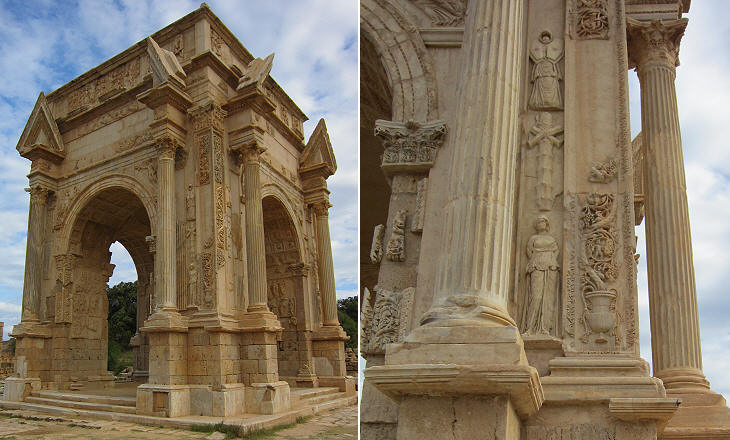 Arch of Septimius Severus and detail of its decoration

The arch was very extensively decorated; reliefs portrayed prisoners, military symbols, vases with grapes and a series of large panels depicting events in the Emperor's life. 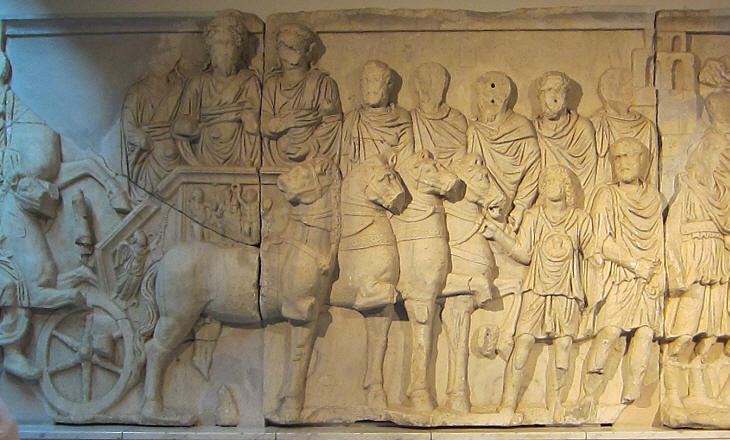 Arch of Septimius Severus: relief portraying the triumph of the Emperor who is accompanied by his two sons Geta (left) and Caracalla (right); the face of Geta was erased after his assassination by Caracalla in 211 (Museum of Tripoli)

The second marriage of Septimius Severus occurred in 187, after the death of his first wife, a woman from Leptis; apparently he married Iulia Domna, the daughter of a Syrian priest, because he knew the girl was foretold she would marry an emperor. Iulia Domna accompanied her husband on his campaigns and was given the title of mater castrorum, mother of the barracks. She bore Septimius Severus two sons, Caracalla and Geta, who were earmarked to succeed their father. 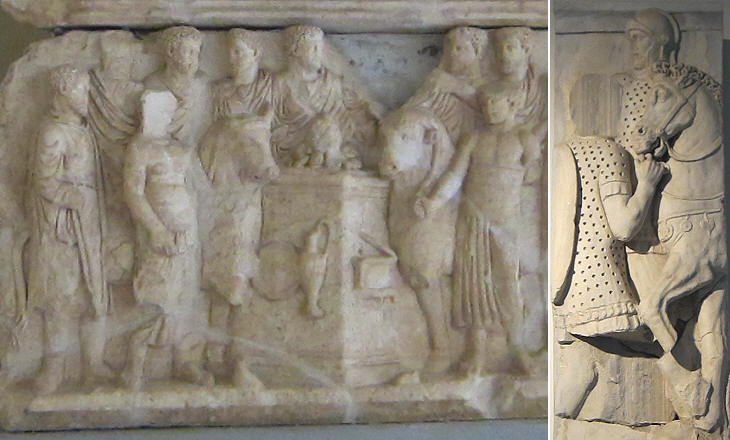 Arch of Septimius Severus: (left) relief portraying a sacrifice; the erased head is that of Geta (Museum of Leptis Magna); (right) fragment of a relief (Museum of Tripoli)

The cursus honorum (political career) of Septimius Severus did not include significant positions in the army until he was 46 when he was assigned to command the Roman legions in Pannonia (today's Hungary) by Emperor Commodus in 191. As an Emperor however he spent most of his time on the battlefield especially in the eastern regions of the empire and in Britain, where he died in 211 after having tried to subjugate the Caledonians. 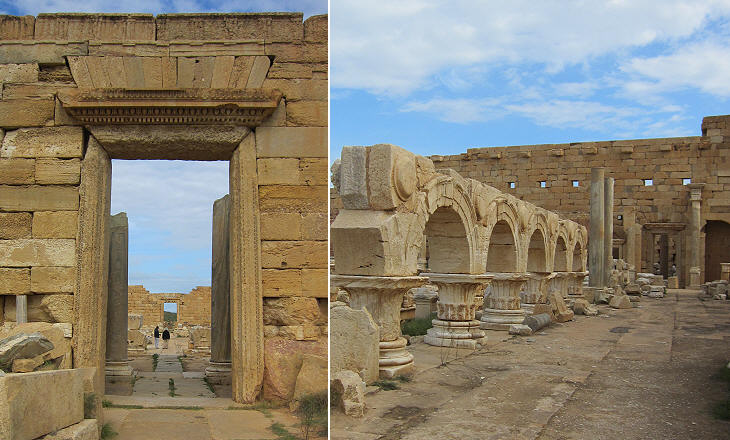 New Forum: (left) one of the entrances to the forum; (right) central street leading to Basilica Severiana

At the end of his 203 visit Septimius Severus gave orders for a general upgrade to the facilities of Leptis and in particular for the construction of a series of public buildings between Hadrian's Baths (see page one) and the harbour; this new forum was completed in 216, after the emperor's death. 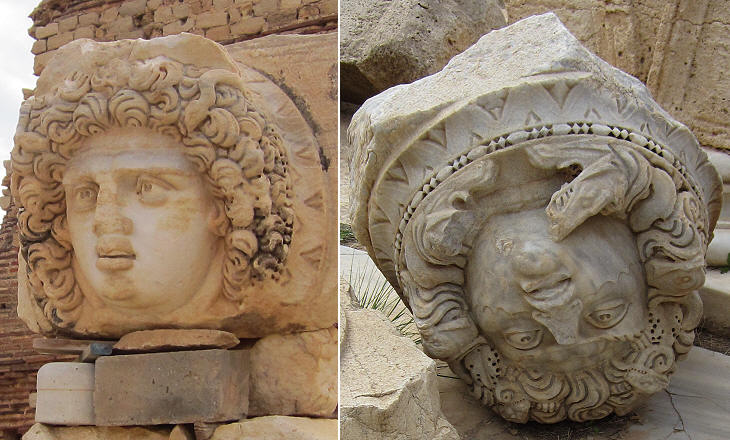 Heads of Medusa which decorated the New Forum

Gigantic heads of Medusa, the Gorgon killed by Perseus, decorated the New Forum; they were an apotropaic symbol (i.e. they averted bad luck) which ensured the safety of Leptis; similar gigantic heads, although of a poorer quality, can be seen at Yerebatani Saray in Constantinople. It is thought that the heads of Medusa and other decorative elements of the New Forum came from Afrodisias, a town in Asia Minor, known for its talented sculptors and the availability of marble. Medusa was very often portrayed on sarcophagi and mosaics. 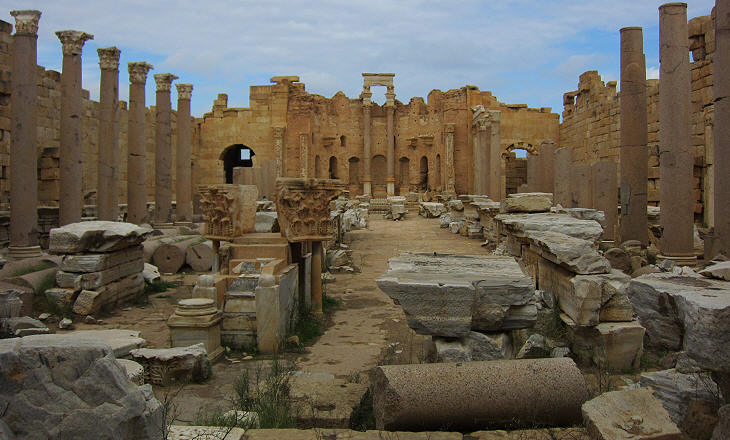 A large basilica with two opposite apses was the main building of the New Forum; its design imitated that of Basilica Ulpia in Rome, as if Septimius Severus who, for lack of space, was unable to build his own forum in Rome next to those of Augustus, Nerva and Trajan, had decided to build it in his hometown. 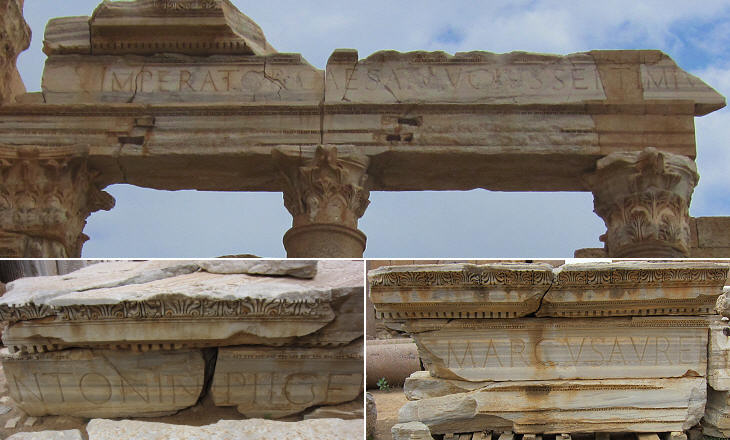 Two long inscriptions celebrated the beginning (by Septimius Severus) and the completion (by Caracalla) of the construction; in the second one Caracalla listed all the emperors (starting from Nerva) who preceded him with the purpose to legitimate his own power; the list did not include Commodus, the son of Marcus Aurelius, and Geta, his brother. 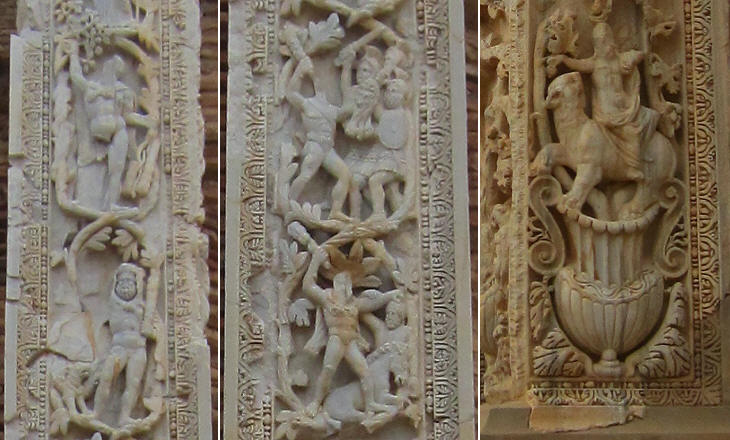 The decoration of the basilica was extremely varied and most probably it came from Afrodisias; the reliefs are very finely executed, but overall they convey the impression of having a purely decorative purpose, as if they had been selected by consulting a catalogue. 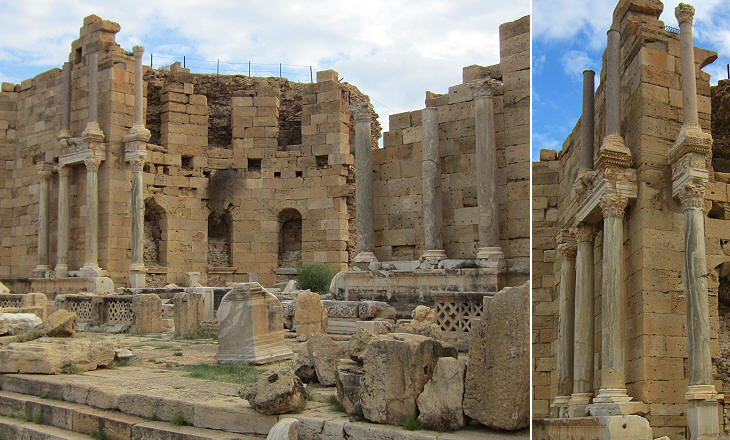 A colonnaded street, of which not much remains, linked the New Forum to the harbour; at its beginning Septimius Severus built a large nymphaeum (a monumental fountain), which in 1937 Italian archaeologists in part reconstructed and named Belvedere Mussolini; this because the Italian leader of Fascism, was invited to reach a terrace on top of the building, to have an overall view of the site; Italo Balbo, the governor of the colony, who expected to be praised for the work he had done, was instead reproached for having spent too much money on expensive reconstructions. 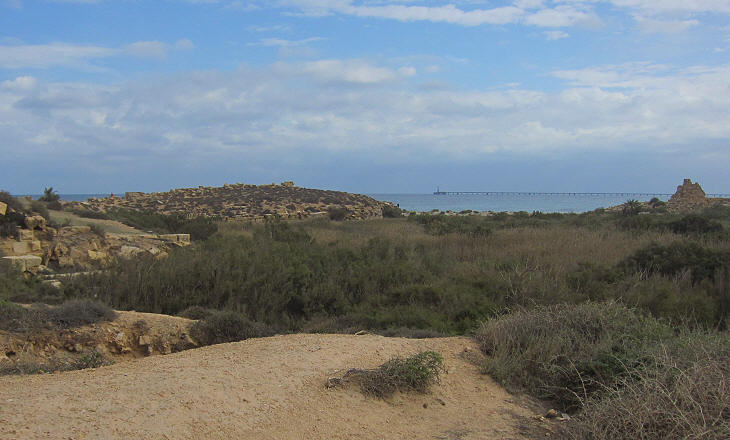 Septimius Severus ordered the enlargement of the harbour, but this decision caused major problems because the changes which were made, including a dam on a stream which emptied into the harbour, led to recurring silting problems; as a matter of fact small ports near Leptis had to be used as an alternative to the main one; after the town was abandoned, the port was entirely silted and some of its facilities, which included a lighthouse, were turned into small fortifications by the Arabs. 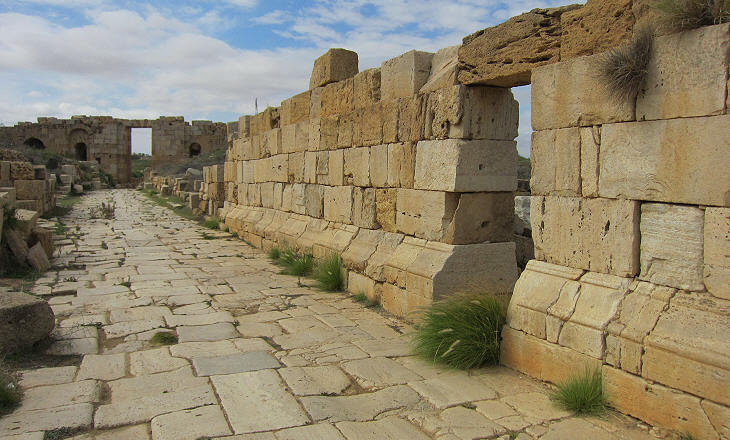 After the large program of public works implemented by Septimius Severus, no major additions were made to the monuments of the town and this notwithstanding the fact that Emperor Diocletian made Leptis the capital of Numidia Tripolitana, a new province. The decline of the town was due to that of trade; when the Roman market could no longer absorb Leptis' production of olive oil, farmed land was reduced and eventually the sand of the desert reached the gates of Leptis; in the VIth century the Byzantines built new walls to protect the small section of the town which was still populated. 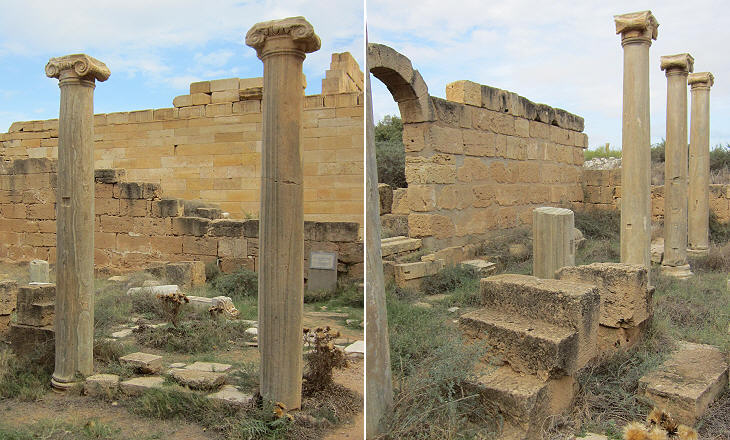 Some of the temples and basilicas were turned into churches with very minor changes to their design (addition of ambos and baptismal fonts). The conquest of the region by the Arabs in the VIIth century led to the total abandonment of Leptis; its temples, basilicas, baths and other monuments became a gigantic open air quarry until they were completely covered by sand.
In 1982 Leptis Magna was included in the Unesco World Heritage List. The image used as background for this page shows a portrait of Emperor Septimius Severus.

Return to page one or move to:
Introductory page
Oea (Tripoli)
Sabratha