- Knossos
(Painting showing a bull-leaping exercise found at Knossos, now at the Archaeological Museum of Iraklion) 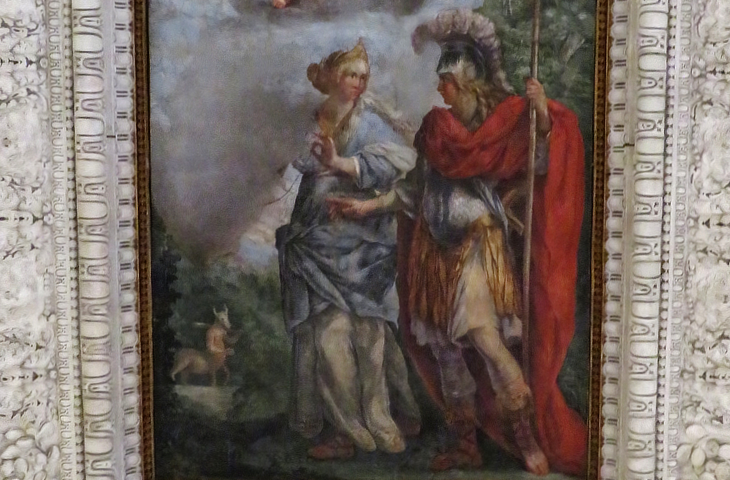 Minos' daughter Ariadne fell in love with Theseus at first sight. "I will help you to kill my half-brother, the Minotaur" she secretly promised him, "if I may return to Athens with you as your wife". This offer Theseus gladly accepted, and swore to marry her. Now before Daedalus left Crete, he had given Ariadne a magic ball of thread, and instructed her how to enter and leave the Labyrinth. She must open the entrance door and tie the loose end of the thread to the lintel; the ball would then roll along, diminishing as it went and making, with devious twists and turns, for the innermost recess where the Minotaur was lodged. This ball Ariadne gave to Theseus, and instructed him to follow it until he reached the sleeping monster, whom he must seize by the hair and sacrifice to Poseidon. He could then find his way back by rolling up the thread into a ball again. That same night Theseus did as he was told.
Abridged excerpt from Robert Graves - The Greek Myths - Collins. 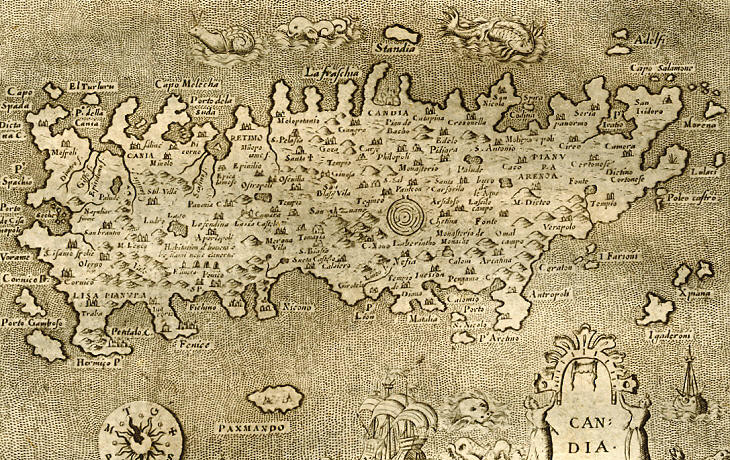 Cnossus is famous for having been the residence of king Minos, where he had his palace: The labyrinth also was here, concerning which there are so many fables; but even in the time of Pliny there were no remains of it.
Richard Pococke - A Description of the East and Some Other Countries - 1745.
One of the most popular tales of the ancient world involved the Minotaur, Theseus, Ariadne and the Labyrinth; Emperor Domitian decorated his palace with a fountain resembling the Labyrinth and floor mosaics depicting the Labyrinth have been found in many Roman villas (see that at Sabratha). The myth of the Labyrinth became popular again during the Renaissance; many villas had box hedge mazes for the amusement of the guests. The site of the actual Labyrinth was unknown, but cartographers felt obliged to show it in their maps of Crete at the centre of the island. 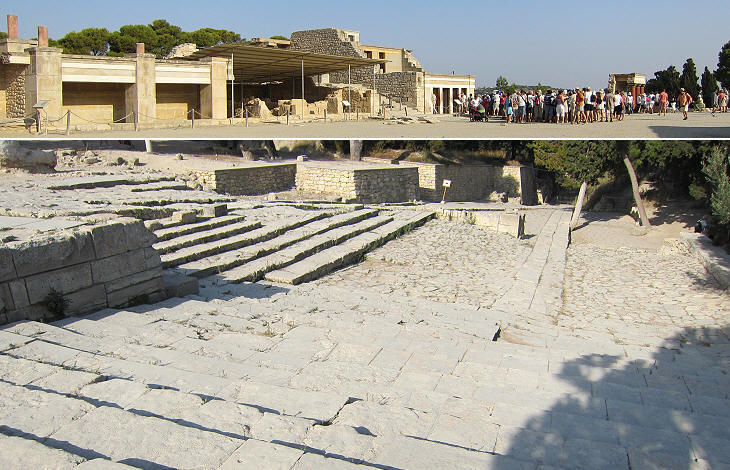 (above) Great Courtyard; (below) Theatre

Heracleion was the port of Cnossus, and the ruins of that ancient capital - if so they can be called, for nothing but a single wall remains - are to be seen at an hour's distance to the south.
Henry Fanshawe Tozer - The islands of the Aegean Sea - 1890
In 1874 Heinrich Schliemann, a German businessman and amateur archaeologist, announced he had found the ruins of ancient Troy at Hisarlik, a site on the Anatolian coast opposite Tenedos. Two years later Schliemann found what he thought was the golden funerary mask of Agamemnon at Mycenae. These discoveries brought Schliemann great fame and they led other unprofessional archaeologists to undertake excavations in Greece.
In 1878 ruins of ancient buildings were discovered south of Iraklion, but excavations did not go ahead because of the opposition of local Ottoman authorities. In 1898 Crete became a sort of independent state, although it remained under the formal suzerainty of the Ottoman Sultan; Great Britain, France, Russia and Italy sent troops to maintain order after a series of clashes between Christian Orthodox and Muslims; a civilian government was headed by Prince George, the second son of the King of Greece. In this precarious political system, Arthur Evans, a British self-taught archaeologist, was able to purchase the land where the ruins had been discovered and to start a large scale excavation campaign. 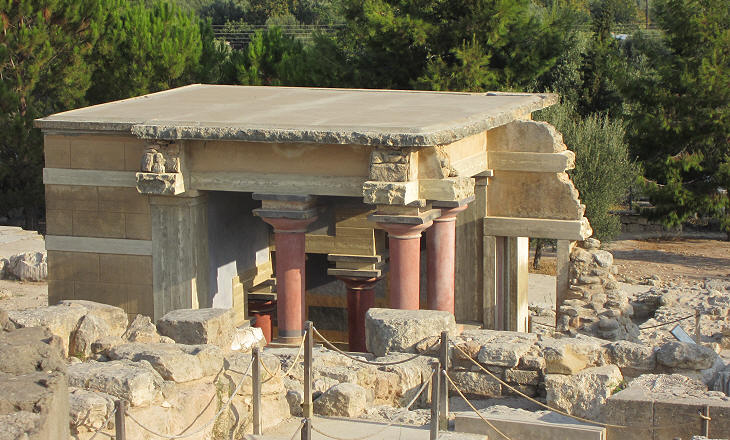 Reconstructed Hall of the Ritual Bath

Evans was not held accountable by any local authority about the way he was conducting the excavations and the soundness of the claims he was making about his findings. Evans announced he had discovered the Palace of King Minos, the mythical father of the Minotaur and Ariadne. Today archaeologists regard the very complex ruins of Knossos as an administrative and storage centre, rather than just a royal residence. The actual site of the Labyrinth was never found, but the layout of Knossos with its many small buildings and narrow passages resembles a labyrinth. 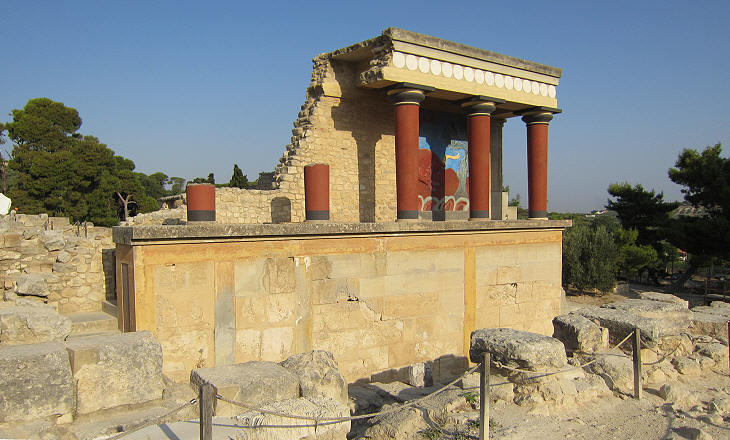 Anastylosis (same stone) is an archaeological term meaning the reconstruction of an ancient building utilizing the original material to the greatest possible extent. Its use is a matter of debate, but in general it is accepted in the case of fallen columns and lintels which can be easily reassembled. At Knossos Evans did not find stone columns, but holes containing evidence of cypress wood columns. He came to the conclusion that the columns were noticeably tapered, because the tree trunks were placed upside down. In order to help in understanding the structure of the ancient palace, Evans built parts of its monuments using concrete. 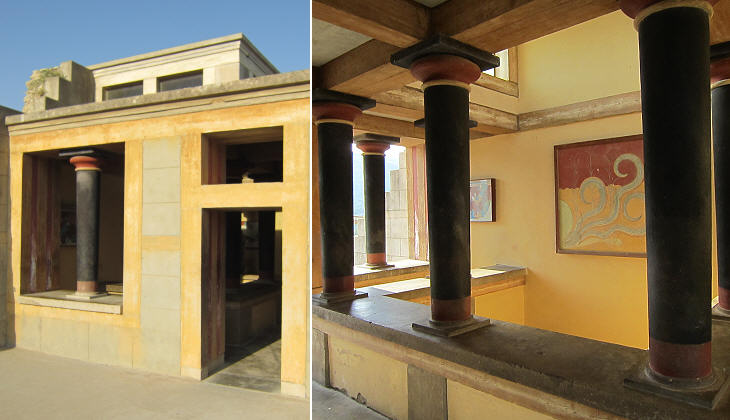 Reconstructed hall on the second floor

The reconstruction in concrete of so many parts of the ancient ruins, including the floor of the Great Courtyard minimizes the risk of visitors twisting their ankles and provides photographers with interesting backgrounds for pictures of their relatives, but led UNESCO to drop a proposal made in 2003 by Greek authorities to include Knossos in the list of the World Heritage Sites. There is no official explanation provided by UNESCO about their decision, but it is likely that concrete monuments were not regarded as a heritage to preserve for future generations. 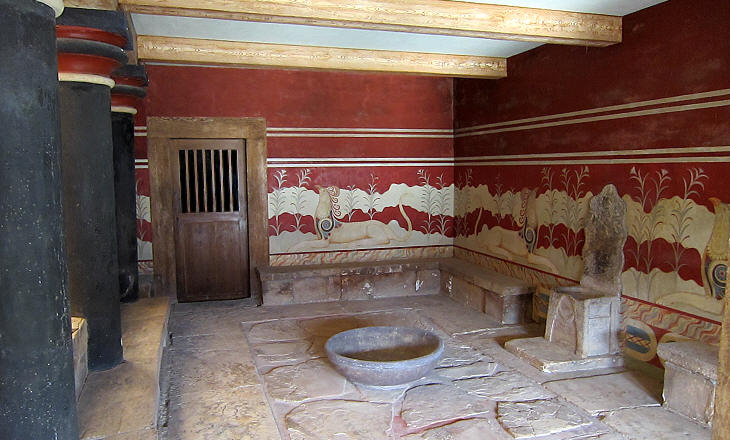 Hall of the Throne

Evans asked Emile Gilliéron, a Greek born Swiss painter, and his son by the same name to decorate some of the reconstructed buildings with frescoes; their paintings on a Pompeian red background are to a large extent the product of the ingenuity of the artists.
Duncan Mackenzie, a Scottish archaeologist who worked for Evans left detailed notes on the progress of the excavations. These notes have helped modern archaeologists in understanding the rationale behind Evans' conclusion that a certain hall was that of the throne and another one was part of the king's apartment. However the concrete reconstruction has been so wide and pervasive that further archaeological work to confirm Evans' findings cannot be undertaken; for this reason the explanatory panels which are placed near the main monuments often have sentences such as "Evans believed", "Evans came to the conclusion" and similar ones. 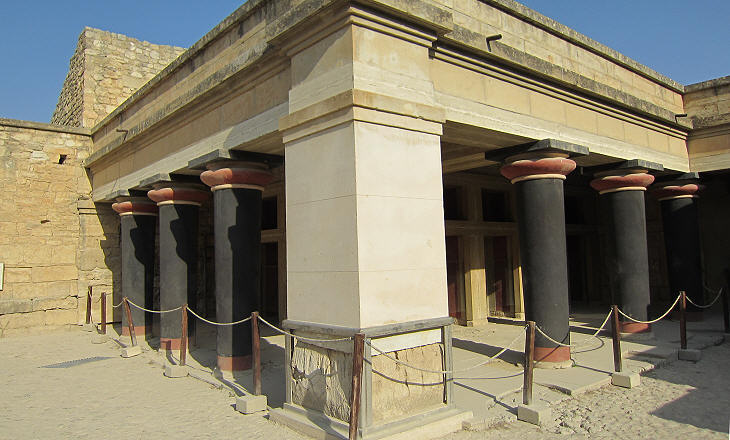 When Evans started his excavations he was convinced the ruins belonged approximately to the same period (1600-1300 BC) as those of Mycenae and Tiryns, but he soon found evidence that suggested they had been built at an earlier stage; he called Minoan (after Minos) this early civilization which he dated ca 2000 BC. This discovery gave a historical significance to the tale of Theseus and the Minotaur, which is now seen as a metaphor of the end of the hegemony of Crete over the rest of Greece which occurred when the Dorians invaded the island in the XIth century BC. 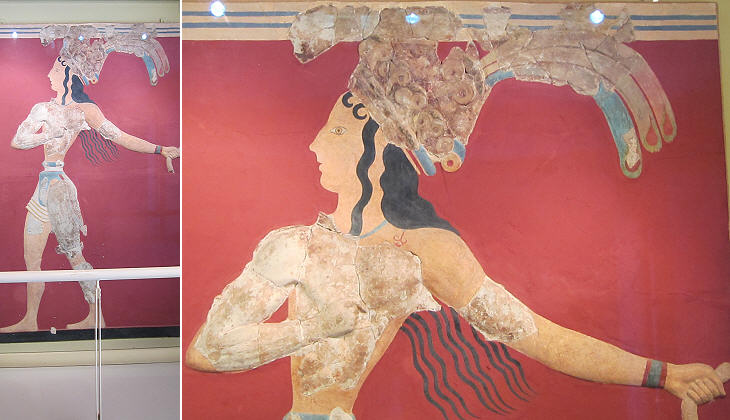 Archaeological Museum of Iraklion: The Prince of the Lilies

The development of civilization on Crete was favoured by its proximity to Egypt. The Prince of the Lilies is the most famous image of the Minoan civilization; it represents a priest-king wearing a crown of lilies and peacock feathers. The only original parts are three plaster fragments, which initially were thought to belong to different subjects. The analysis of other (small) paintings, chiefly those on a sarcophagus found at Agia Triada led to placing them together in a hypothetical painting. Regardless of the full consistency of the painting the personage is portrayed in the typical mixture of profile and frontal views which characterizes Egyptian images of human beings. You may wish to see some reconstructed frescoes from Akrotiri on the island of Thera or Santorin, north of Crete. Knossos is located a few miles from the sea in an area which today is surrounded by the suburbs of Iraklion; apparently the palace/town did not have major fortifications, a very peculiar thing which can only be explained by assuming that Crete was such a maritime power it did not fear invasion. 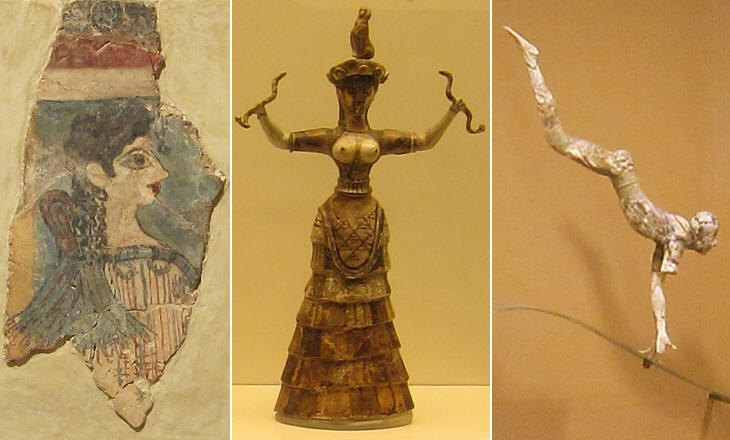 Emile Gilliéron and his son made some of the fragments of frescoes found by Evans at Knossos very popular by painting cleaner reproductions of them; the portrait of a priestess was dubbed La Parisienne by Evans because of her elegant appearance and the probable use of cosmetics to emphasize the eye; the Gilliérons did not limit themselves to paintings, but they cast and sold copies of objects found by Evans.
The Snake Goddess is a small statue portraying the Earth Mother or another symbol of fertility holding two snakes; the object was an offering linked to a funerary rite; the snakes were a symbol of the goddess and they had a positive connotation (see an ancient relief at Argos with a snake having a similar connotation).
The bull-leaper was found with fragments of at least two other leaping ivory figures of similar scale; scholars have suggested that bull-leaping was a ritual practice, perhaps symbolizing human domination over nature and associated with passage into manhood (see a fresco from Tiryns which is very similar to that shown in the icon of this section). 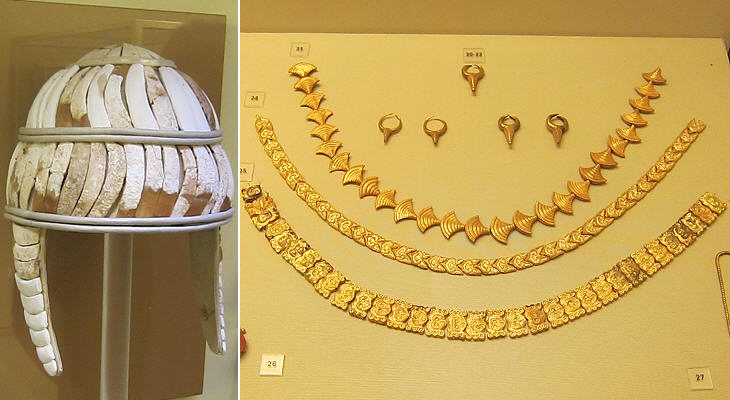 Archaeological Museum of Iraklion: (left) crown made with boar tusks (see a similar one at Mycenae); (right) gold necklaces

The image in the background of this page shows a rhyton (a vase for ceremonies) having the shape of a bull, now at the Archaeological Museum of Iraklion (see that found at Mycenae).
The tale of the Minotaur is evidence of the importance of bulls in Minoan civilization, but it is not the only tale linking Crete to bulls. Zeus fell in love with Europe, a beautiful girl who lived in Phoenician Tyre; she used to walk by the seashore and there he met Zeus disguised as a snow-white bull with great dewlaps and small gem-like horns. Europe was struck by his beauty and began to play with him; eventually she climbed on his shoulders. Suddenly he swam away with her; they waded ashore on Crete near Gortyn where Zeus became an eagle and seized her. She bore him Minos, the mythical king of Crete. Abridged excerpt from Robert Graves - The Greek Myths - Collins. 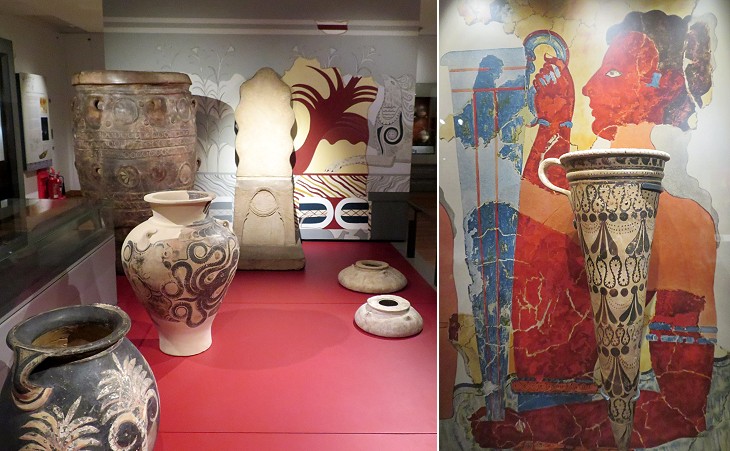 Move to Phaistos or Gortyn.