- Towards Nigde - Voices from the Past
(Sultanhan)

The small village of Ivriz is located eight miles south of Eregli, a provincial town between Karaman and Nigde. The village offers nice views of the Taurus Range which divides the Anatolian plateau from Cilicia and which has peaks of more than 10,000 ft.
In 1748 Jean Otter, a French academic, reported in his Voyage en Turquie et en Perse that he had seen an ancient relief on a rock near Ivriz. He may have just been told about it because he did not describe it in detail. A sketch of the relief was first published in 1858 in Germany. 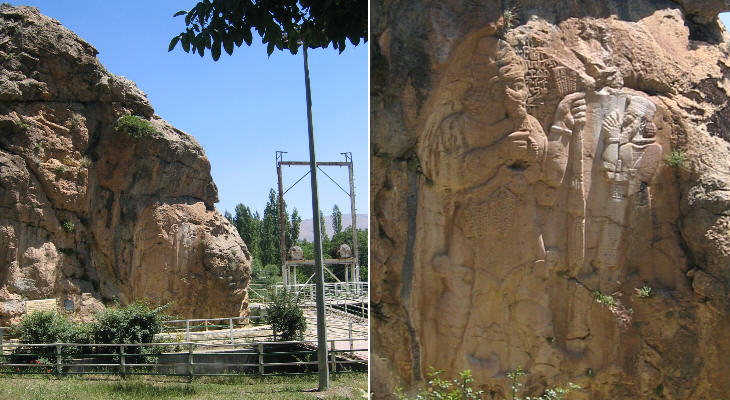 The relief is carved in a wall of a rock, at the foot of which several sources form a sizeable stream which heads north towards Eregli. It is probably this stream which is celebrated in the relief. The high mountains which surround the Anatolian plateau stop the clouds on the coastal strips; in particular those on the Black Sea, have abundant rainfall. Inland, water is a scarce resource and a stream is a God's blessing.
The relief portrays a large figure receiving the homage of a smaller one. They are not a conqueror and his defeated enemy, but a benevolent deity and a powerful king. 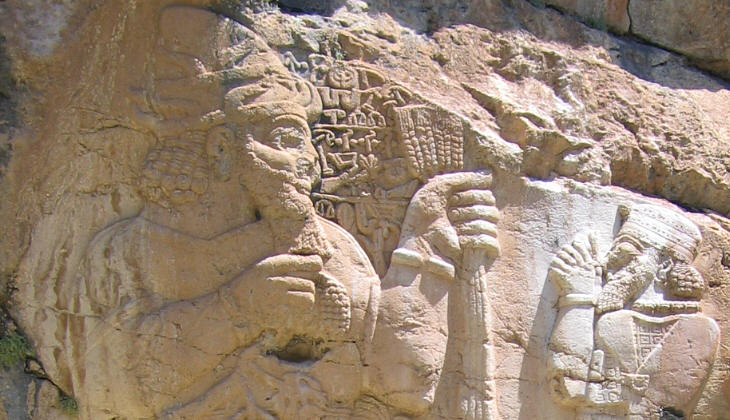 The God and the King: they are both portrayed in line with Assyrian patterns

The deity wears a horned crown and holds a sheaf of wheat and a bunch of grapes which he is about to give to the king who is portrayed in a very Christian adoration gesture.
Archaeologists date the relief to the VIIIth century BC and by interpreting the hieroglyphs have given a name to the deity (God Tarun) and to the king (Warpalas, King of Tuwanuva). The latter is a neo-Hittite kingdom which flourished after the collapse of the Hittite Empire of Hattusa. Towns of other neo-Hittite states can be seen at Karatepe and Ain Dara.

Details: (left) a most oriental shoe; (centre) grapes; (right) King Warpalas; the head of the God is shown in the image used as background for this page

The relief is very elaborate and it shows a high degree of skill. This could be acquired only through the carving of many reliefs; although some other poorly done reliefs have been found near the village, this one is unique in this part of the tableland (in the north-western one there is another gigantic relief surrounding a rock-cut tomb). It is likely that other reliefs were destroyed by the Byzantines during their campaigns to eradicate the ancient gods or by the Arabs during their raids. This relief was spared: it would have been a bad omen to destroy a scene portraying fruit and crops being bestowed on mankind. 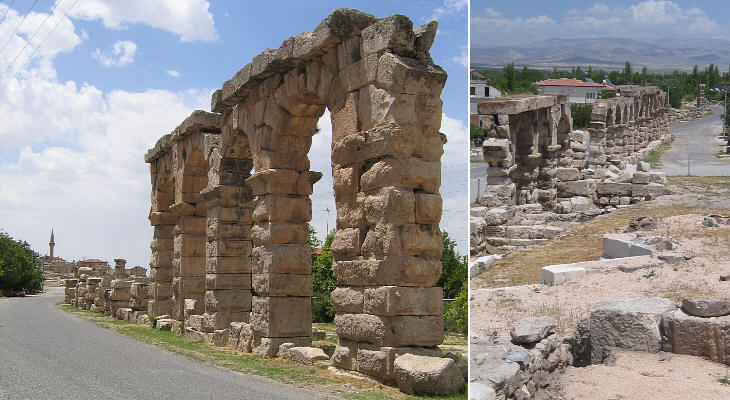 (left) The aqueduct near Kemerhisar; (right) ruins of Tyana

(August 1836) Leaving Bor after a ride of three miles due south, reached the village of Kiz Hissar, or Kills Hissar, built upon a low mound in the middle of the plain. Here also many of the gardens were neglected for want of water, and the plain was strewed with blocks of marble, probably left there on their way to Bor. Before reaching the Agha's konak we rode under the ruined arches of an ancient aqueduct, which comes from the hills to the east, along the line of a small stream which waters the gardens; it was evidently intended to supply the town built upon the above-mentioned mound. From its construction, it appears to be Roman; it is built with blocks of compact scaglia limestone. (..) We left the gardens soon after six this morning, proceeding due west along the stream, with the aqueduct to our right. Near the village it had reached a considerable elevation, in consequence of the fall of the ground; and close and slender piers gave it a picturesque appearance.
William Hamilton - Researches in Asia Minor, Pontus and Armenia - 1842
Kemerhisar is a village ten miles south of Nigde. Its name means "castle of the aqueduct", but in antiquity it was a sizeable town known as Tuwanuva (Hittite period) and Tyana (Roman period). Roman public baths and an early Christian baptistery have been identified in the side of the Roman town near the aqueduct.

The gradual appearance of the aqueduct

Following the clear and limpid stream, flowing past my tent, and along the banks of which I traced the remains of the aqueduct, gradually diminishing in height as the ground rose, I reached its sources about two miles and a half N.E. from the village. Hamilton
The conduit came to the surface a couple of miles from its final destination. At first one sees just a long line of buried arches, then they very gradually rise up from the ground. Because the aqueduct is rather short one can easily understand its hydraulic functioning and appreciate the engineering knowledge achieved by the Romans and in particular the preciseness of their measurements. You may wish to see the aqueduct of Segovia, one of the best preserved Roman aqueducts.

A copious spring rises in the centre of a small lake or pool about 100 feet long and 50 wide; it is surrounded by numerous blocks of marble and fragments of cornices and architraves, many of which have been used in the construction of a dam, to keep up the water for the supply of a neighbouring mill. Hamilton
According to archaeologists the aqueduct was built by Emperor Caracalla. Spring waters were collected in a rectangular basin which was decorated with finely moulded white stones. Water started its journey towards Tyana in an underground conduit.

At ten we reached the suburbs of Bor, and soon after descended into the town, which is neat and tolerably well built. Most of the houses are situated in the midst of gardens and orchards; in the streets and different buildings are many large blocks of stone and marble, and fragments of broken columns, brought from the neighbouring ruins of Kiz Hissar. Hamilton

The town of Bor can be considered the heir of Tyana which is just a few miles away. Bor is located along the ancient road leading to Nigde. Today it has a very modern aspect yet the presence of some old hammams indicates its inhabitants are still attached to the traditional Ottoman way of life. 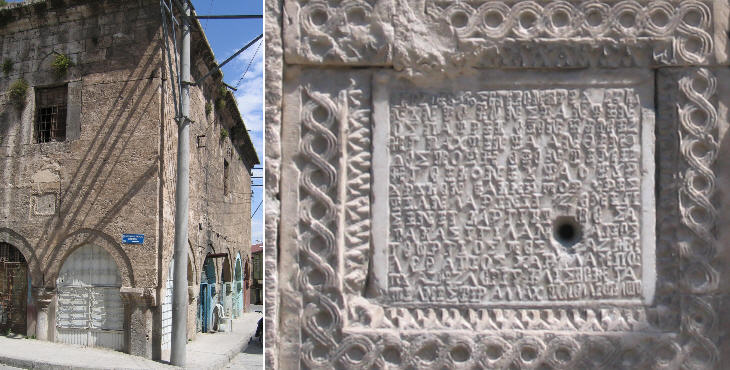 A former church and the inscription on its side

The presence in Bor of a relatively large building which once was a church brings to memory the so called Cappadocian Greeks. While the Greek-speaking people of western Anatolia maintained close contacts with other Greek-speaking groups (either those living in today's Greece or in Constantinople and Smyrna) those living in Cappadocia were isolated. Over time their language absorbed Turkish expressions. At the same time it retained words and syntax structures of Ancient Greek which were abandoned by mainstream Greek communities. Even the aesthetic aspect of the inscription shown above seems to have been influenced by Muslim art because it is a relief rather than a carving.

At half-past seven we reached Misli, a small village, almost underground, being built on the soft peperite, into which the houses are partly dug. The place contained between 200 and 300 houses, all inhabited by Greeks independent of the Turkish authorities, and subject only to the Bishop of Nigdeh. The inhabitants pay no taxes to the government; but work gratuitously in the lead-mines of Maden Dagh, distant five or six hours to the E.S.E. This at least used to be the practice, but now they are said to pay their contributions to the mines, and miners are procured from Gumishkhana. The Greeks of Misli never leave their village or travel in search of employment elsewhere, and neither men nor women are allowed to marry strangers. (..) The rock itself is peculiarly dry and porous, and therefore admirably adapted for man to live in. Hamilton

Hamilton did not actually see Eski Gumus which was discovered in the second half of the XXth century, but his description of a nearby rock-cut town fits that of Eski Gumus. The best way to approach it is ... from above. A flat rock with a view over the oasis of Nigde does not show any hint of the presence of the old village until one unexpectedly arrives on the edge of a large square hole cut out of the rock. 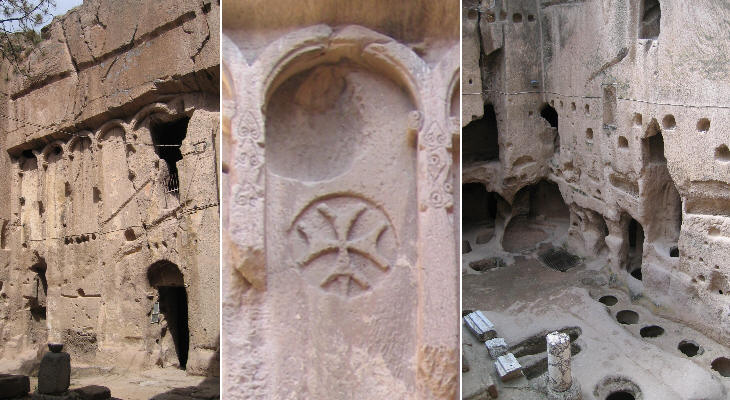 Details of the courtyard

The inhabitants of Gumus were monks and their servants; cells, warehouses, stables were all cut into the rock. The walls of the courtyard were decorated with blind arches and crosses. The monks gathered in a domed church decorated with frescoes. From the paintings and other decorative elements it is thought the monastery was in existence from the VIIth to the XIth century, a period during which the security in the region was at very low levels. 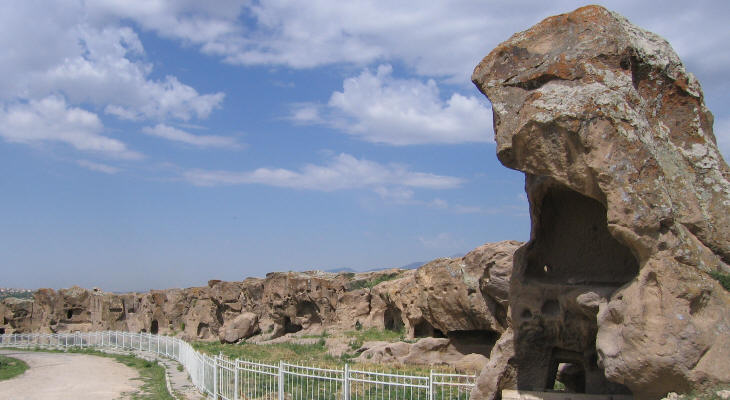 Side view of the monastery/village

All the inhabitants of Cappadocia appear to have been troglodytes, and to have had but one habitation common to themselves, their pigeons, and their dead. Hamilton
The rock is thought to have been cut to shelter human beings and animals since prehistoric times and people continued to live there until not so long ago. There are more than a hundred "houses" lined up on the eastern side of the rock. You may wish to see a similar village at Cavusin.