Tipasa: Central Hill
(detail of a mosaic at the Museum of Cherchell)

You may wish to see an introductory page to this section or a page on the main monuments of Tipasa first. 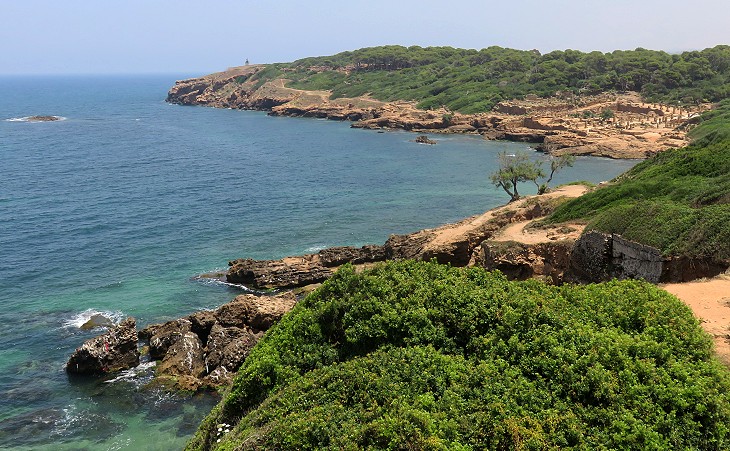 View of the central hill from the western one

The archaeological area of Tipasa includes two of the hills along the coast upon which the ancient town stood. The eastern one, where the harbour was located, is part of the modern town. The very Mediterranean landscape which surrounds the ancient ruins attracted the attention of Albert Camus (1913-1960), a French writer born in Algeria and best known for his novel The Plague. In 1939 he wrote Nuptials at Tipasa, a short account of his stay in the small town and of his visit to its ancient monuments. 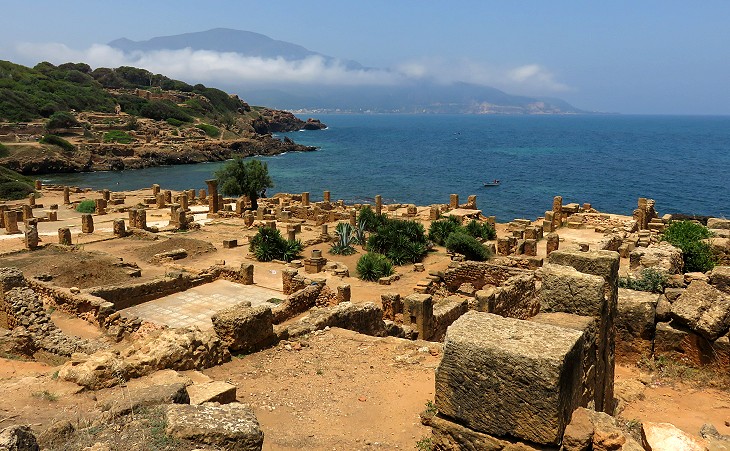 View of Villa of the Frescoes and in the background the western hill and Mount Chenoua, which hides the view of Cherchell, ancient Caesarea Mauretaniae

A number of rich houses stood near the shore of the central hill. One of them was accessed from Cardo Maximus via a portico which led to a large courtyard. Fragments of paintings were found on the remaining walls of some rooms and thus it is called Villa of the Frescoes, although the proper term should be Domus (house). It enjoyed a commanding view and it must have belonged to a very wealthy family. 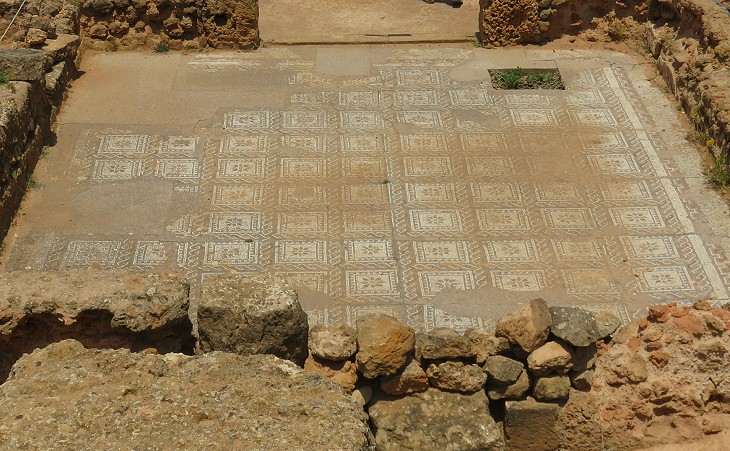 Mosaic of the "oecus" of Villa of the Frescoes

There is not much remaining evidence of the frescoes after which the building is named, but the oecus, the main hall, retains a fine geometric mosaic. 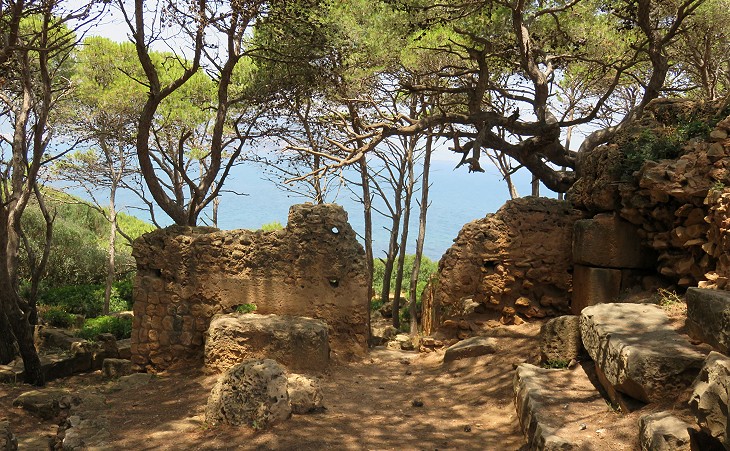 Vegetation near the Forum

In this marriage of ruins and springtime, the ruins have become stones again, and losing the polish imposed on them by men, they have reverted to nature. To celebrate the return of her prodigal daughters Nature has laid out a profusion of flowers. The heliotrope pushes its red and white head between the flagstones of the forum, red geraniums spill their blood over what were houses, temples, and public squares. Like the men whom much knowledge brings back to God, many years have brought these ruins back to their mother's house. Today, their past has finally left them, and nothing distracts them from the deep force pulling them back to the center of all that falls.
Albert Camus - Nuptials at Tipasa - Translated by Ellen Conroy Kennedy
The Forum of Tipasa was identified in ruins at the top of the central hill. It was a large rectangular square with porticoes along three sides. 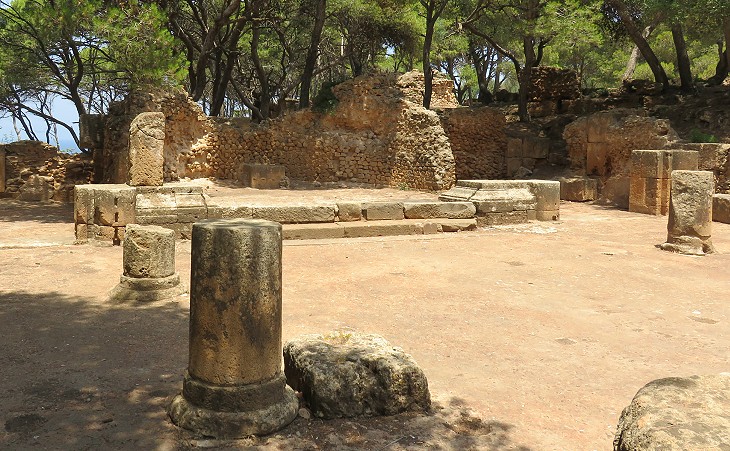 The only building of the Forum which retains more than its foundation is a basilica which was unearthed in 1914. It had three naves and an apse. It is called civil basilica to distinguish it from the basilica-shaped churches which were built on the western hill. It is dated late Ist or early IInd century AD and it served as a tribunal and as a covered meeting place. 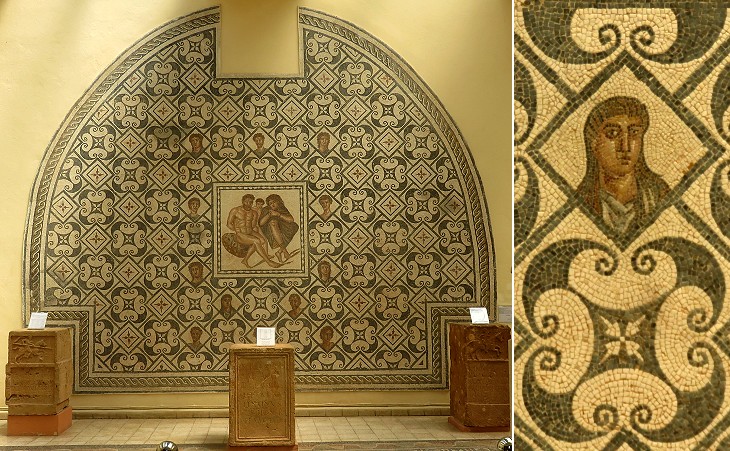 Museum of Tipasa: Mosaic of the Slaves and a detail of it

A fine floor mosaic was found in the apse of the Civil Basilica and after extensive restoration it was moved to a very small museum at the entrance to the archaeological site. It has an elaborate geometric decoration based on pelta, the shield of the Amazons. Twelve small portraits of heads surround a central panel depicting a family of slaves or prisoners. 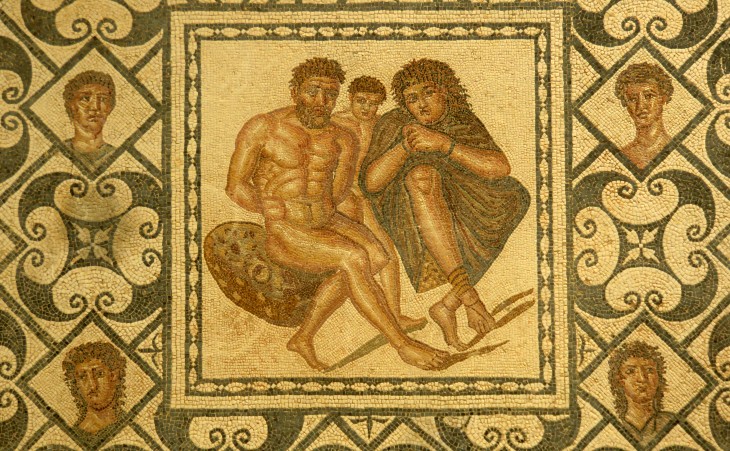 Mosaic of the Slaves: detail

The frizzly hair of the "slaves" and of the twelve surrounding figures is the Roman iconographical feature which identified the native people of the provinces of northern Africa. A modern politically oriented interpretation of the mosaic purpose suggests it was meant to humiliate the inhabitants of Tipasa of non-Roman origin. It might not have had such a general significance and perhaps it was made to celebrate a specific event. We know that Emperor Antoninus Pius ordered the construction of walls to protect Tipasa; the town was therefore threatened by something, possibly a raid by nomadic tribes who lived in the Sahara desert, similar to the Garamantes in Libya. The mosaic therefore might have celebrated a fight in which an attack by these tribes was repelled or a successful punitive expedition in their territories. 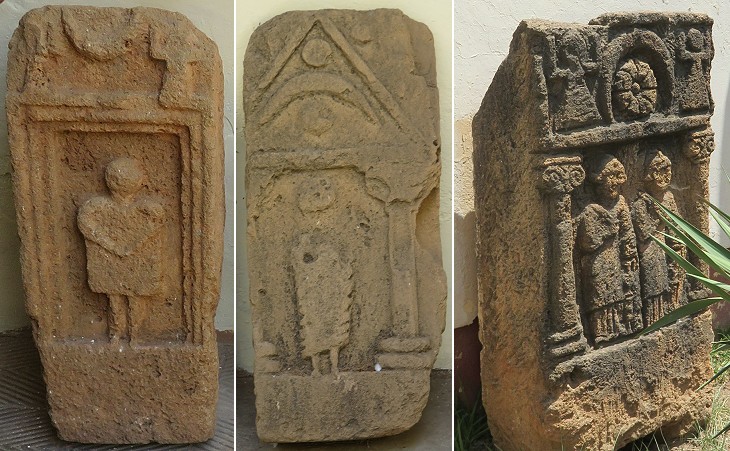 Museum of Tipasa: steles with a half moon surrounding the sun, a symbol of Tanit, a Carthaginian goddess

A number of very interesting antiquities are collected together in the garden of the principal proprietor, Monsieur Trémaux. Murray 1878.
The small museum of the archaeological site originates from that of the Trémaux family who owned a large estate which included the ancient town. An effect of the Carthaginian rule over Tipasa and other towns in northern Africa is the adoption of Phoenician deities by the local tribes, at least from an iconographical aspect. 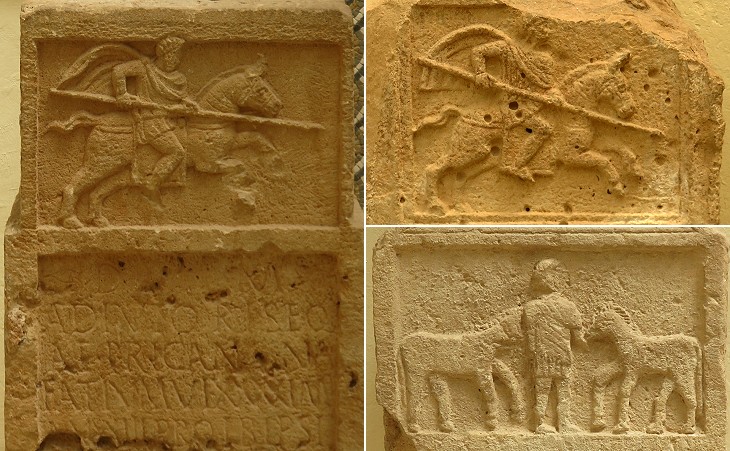 Although Tipasa was not a military town a number of steles of army officers were found there. Some of them are of particular interest because they depict the weapons of members of the Roman heavy cavalry at the time of Emperor Septimius Severus. The two cavalrymen shown above attacked the enemy by using a contus, a very long lance which was wielded two-handed and that was widely used by the armies of the Achaemenid and Sassanid rulers of Persia. 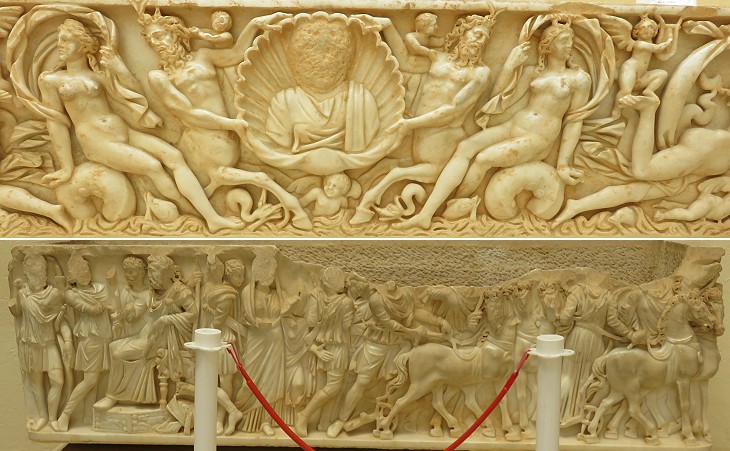 Museum of Tipasa: sarcophagi decorated with: (above) a sea thiasos, a procession of tritons and sea nymphs; (below) scenes from the chariot race between Pelops and Oenomaus

In the first sarcophagus the portrait of the dead inside a clipeus (round shield) was left unfinished so that it could be retouched to depict the actual person for whom the sarcophagus was bought. This is something which often occurred in the "global" manufacturing and trading of sarcophagi in the Roman Empire.
The second sarcophagus shows events related to the race between Pelops and Oenomaus; it was an event which was depicted by statues on the front of the Temple of Zeus at Olympia and so it was well known throughout the ancient world. The relief shows on the left the meeting between Pelops and Oenomaus sitting on his throne and on the right the beginning of the chariot race. Notwithstanding the loss of most of the heads the relief is a very fine piece of work. The image used as background for this page shows the head of Pelops which is carved on one of the short sides of the sarcophagus. Museum of Tipasa: (left) the chariot of Oenomaus; (right) head of Jupiter

Continue your visit of Tipasa by seeing the Christian neighbourhood or return to its main monuments.