Phasania is the name given by the Romans to Fezzan, a vast region located to the south of the coastal strip of Tripolitania, the western part of today's Libya, and which is part of the Sahara, the world's largest desert. 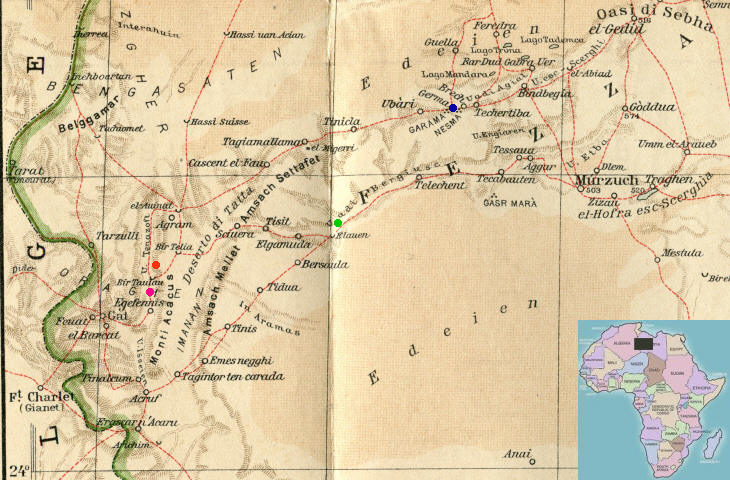 The coast of Tripolitania was first colonized by the Phoenicians and later on it became a Carthaginian possession (Carthage was founded by the Phoenicians). The Romans replaced the Carthaginians after the end of the Third Punic War. In 19 BC Lucius Cornelius Balbus, proconsul of Africa, the Roman province which included Tripolitania, marched southwards and subjugated the Garamantes, who from time to time raided the towns on the coast (Balbus built a theatre in Rome). 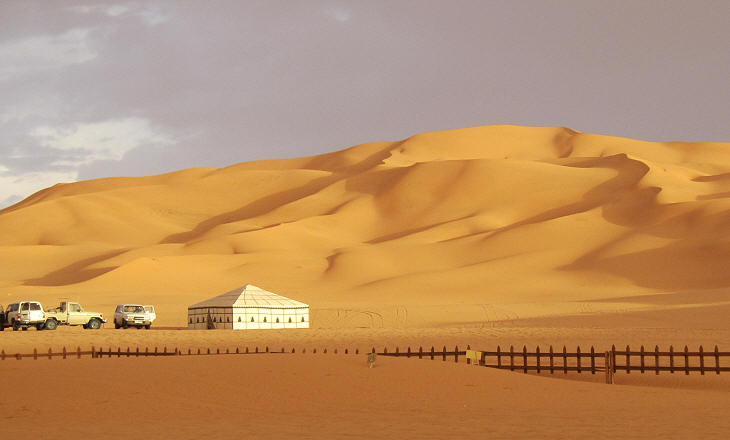 Great Sand Dunes near the old town of Garama

The Romans reached Garama, the main town of the Garamantes, who controlled most of the region; today the area north of Garama is covered by great sand dunes; it is possible that these dunes (edeien in the map) covered a smaller area at the time of Balbus's campaign. Roman mosaics portray Garamantes wearing headdresses made up of long feathers, an indication that the fauna of the region included big birds which no longer exist. 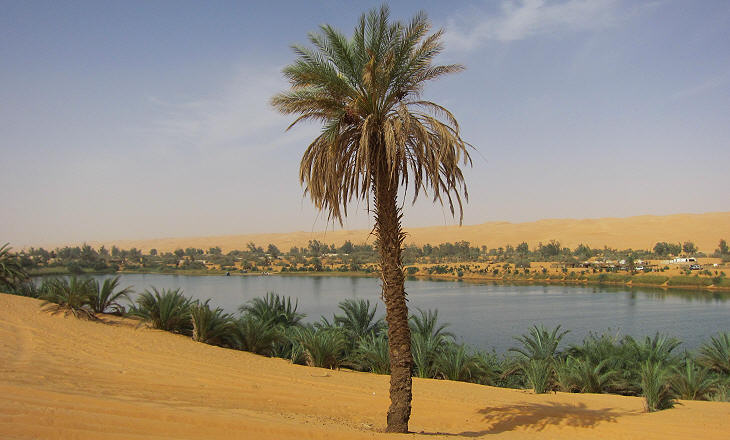 The Lake of Gabron (or Gaberoun meaning grave of Aun) is one of the few remaining evidences of a much larger ancient salt lake which existed north of Garama; owing to its proximity to Sebha, the main town of today's Fezzan, and to its airport this lake has become a must-see of the tours of Libya. 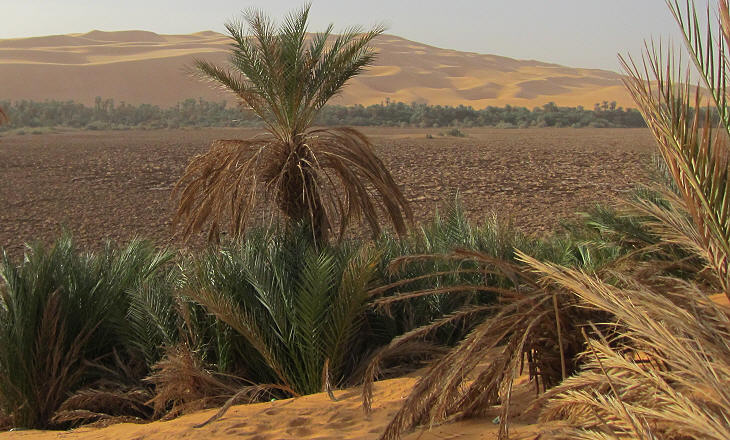 In the 1980s the Libyan government relocated the peasants who lived by the lakes to more modern accommodation; this move has probably accelerated the drying of some lakes. The Garamantes developed ingenious irrigation systems to exploit as much as possible the available water; these systems were abandoned during the Vth century AD. The lakes however continued to support small communities; their members were called worm-eaters, because their diet was complemented by small crustaceans which resembled worms and which lived in large numbers in the highly salted environment of the lakes. 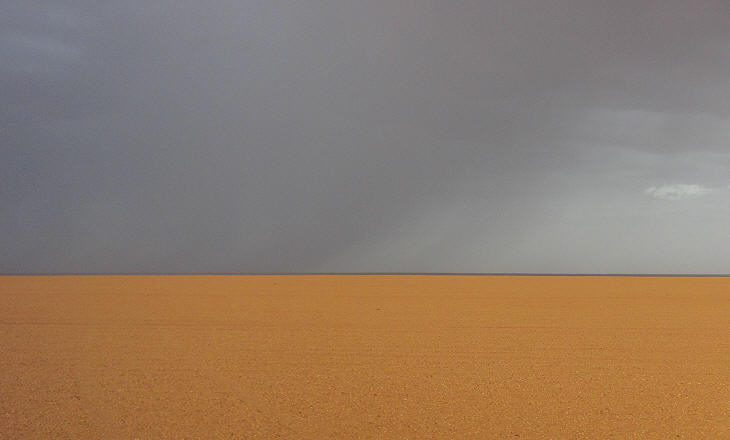 The great sand dunes to the north of Garama stop at the foot of a messak (amsach in the map), an east-west tableland; the landscape of the tableland is completely different; while the dunes design all sorts of curved lines, the messak is as flat as a pool table. The prevailing winds come from the south and the east; the southern ones may bring rainfalls which are the extreme effect of the West African Monsoon; the eastern ones often cause sand storms. 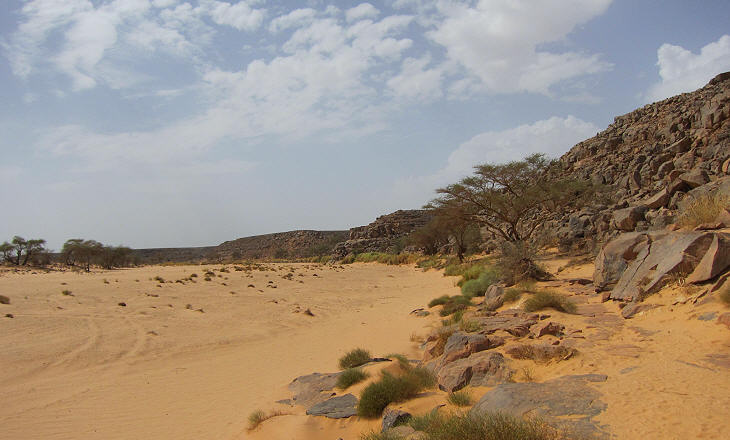 The tableland is cut by uadi, long depressions which are the dried beds of ancient rivers; even today in a much parched environment occasional rainfalls cause the sudden return of water to the ancient beds; at the uadi the inhabitants of the region, well before the historic period, hunted wild animals such as giraffes, elephants and crocodiles, which today we associate with more southern African regions. 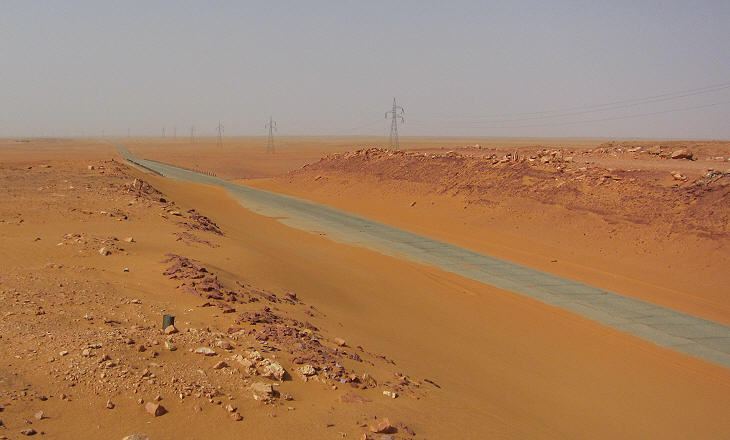 Fezzan is crossed by a modern road which links Sebha with Ghat (Gat in the map) near the border with Algeria which is home to the Tuareg, a Berber people who controlled trade across the desert until the XIXth century; they established a society based on classes; although tourist agencies make many references to Tuaregs and all souvenirs are sold as Tuareg jewellery or artifacts, they (the Tuaregs) seem to be cut off from the tourist business which is run by Arabs even in traditional Tuareg areas. 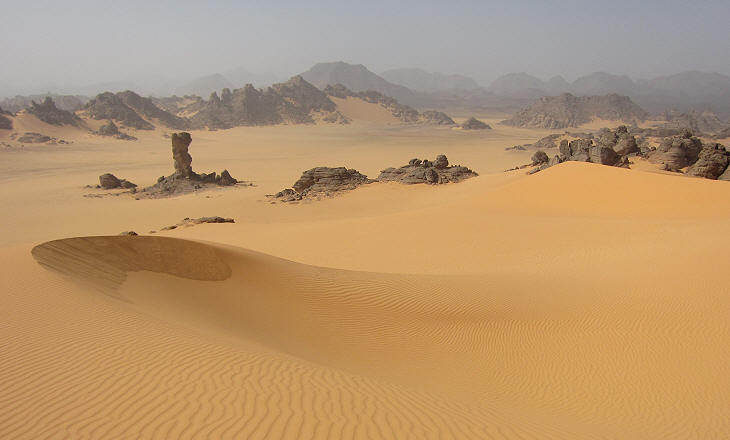 The landscape of the Ghat region is marked by the mixed presence of low mountains (Acacus Mts.) and great sand dunes; the sandstone rocks show impressive effects of erosion, while the sand has a colour with orange and even reddish tones; the rocks appear black, but when scratched they reveal a pink layer. 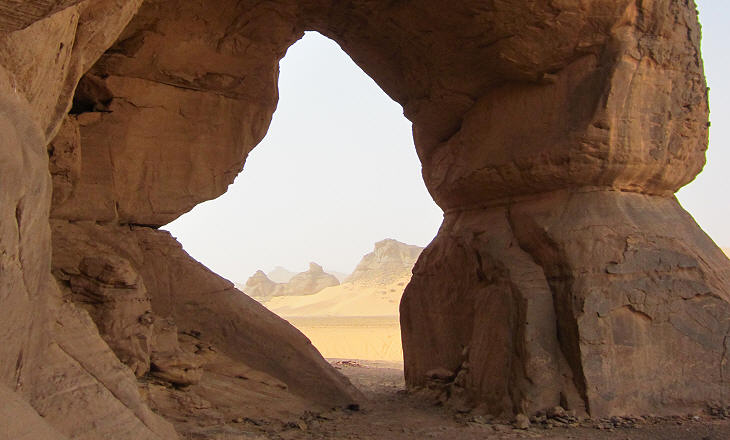 The ancient inhabitants of the region found out that the rocks had veins of different colours which could be easily smashed into a fine powder; the powder was fixed with the white of ostrich eggs to make a coloured paste which was then applied to the most sheltered parts of the rocks to portray animals or scenes of life.
In the 1950s the paintings were studied by Fabrizio Mori, an Italian archaeologist; some of them depict rituals of a society which knew domestication of animals. In 1985 the Acacus Mts. were included in the Unesco World Heritage List for their rock-art. You may wish to see a page on Qobustan, a region of the Republic of Azerbaijan which retains many ancient reliefs which were carved on the rock. 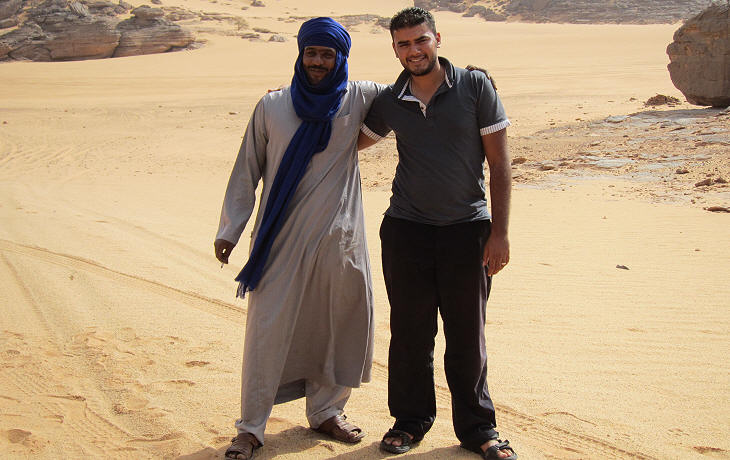 Four-wheel drivers: the one to the left wears the traditional Tuareg blue-coloured veil for the joy of foreign travellers, but he is an Arab from Sebha