Uadi Teshuinat (or Tashweenat) is the bed of an ancient river in the Acacus Mountains in the Libyan section of the Sahara; it is located south of El Auis. Its landscape is marked by a series of natural arches which facilitate orientation. 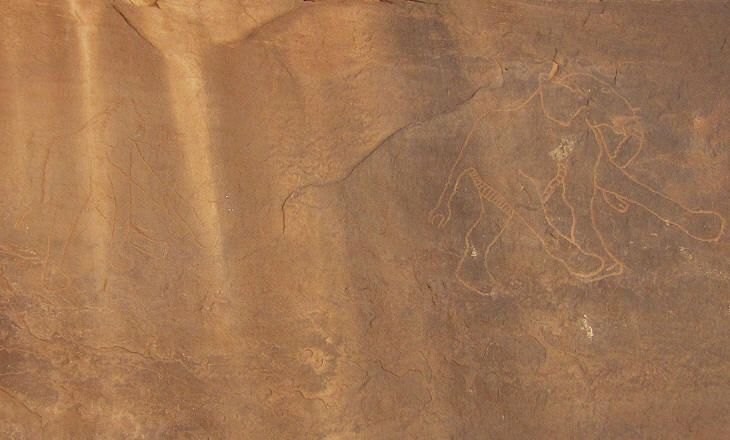 The two elephants at Tintararat site

According to the Italian-Libyan Archaeological Mission in the Acacus Mountains, some of the carvings found at Uadi Teshuinat belong to a period during which the region was inhabited by hunter-gatherers and which preceded the development of pastoralism; the depiction of two elephants on the same rock raised a great deal of interest because the two carvings belong to different periods; the left carving is the older one; its depth is reduced by erosion. 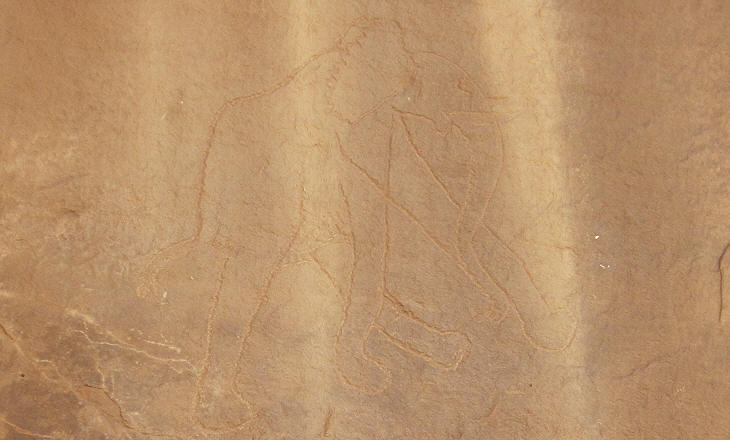 The number of carvings found at Uadi Teshuinat is rather limited when compared to Uadi Mathendush, another dry river bed in Messak Settafet, a tableland to the east of the Acacus Mountains; it is possible that the prehistoric inhabitants of the region preferred to focus on paintings which they made by smashing rocks of different colours into powder.

Rocks where paintings have been found; the inset shows an enlargement of a section with paintings

Fabrizio Mori, an Italian archaeologist, first discovered paintings in the Acacus Mountains in the 1950s; their size is very small; because our ancestors were not short of time, the fact that larger paintings have not been found is somewhat puzzling, although it is possible that only the paintings in very sheltered locations have survived to our time.

Some paintings such as the hunting scene shown above in 1985 led UNESCO experts to include the Acacus Mountains in the World Heritage List for their rock-art. The same piece of rock may show paintings of different periods and possibly some of them are recent additions; Fabrizio Mori documented his findings with many photos and descriptions which now prove very useful in identifying additions and losses due to the action of fools and vandals. Although placards warn of severe sanctions for those who damage paintings and carvings, there is no actual control in place to prevent such actions. 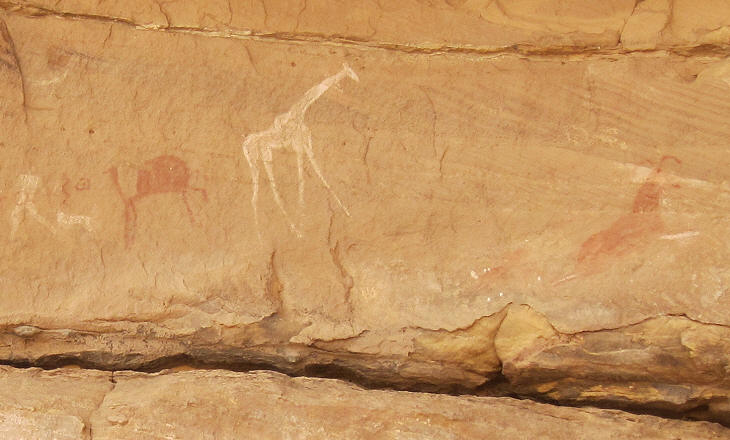 A man, a camel, a giraffe and a cow

Apparently the prehistoric inhabitants of the region were more talented than those who came after; camels were introduced to the region from Arabia when the desertification process had already driven out giraffes and other wild animals; they are usually depicted in a very poor way.

Also this other image shows that the older paintings were more elaborate than those which followed; in particular this giraffe shows the combined use of white to delineate the contour of the animal and of red for the irregular patches of colour of its skin. 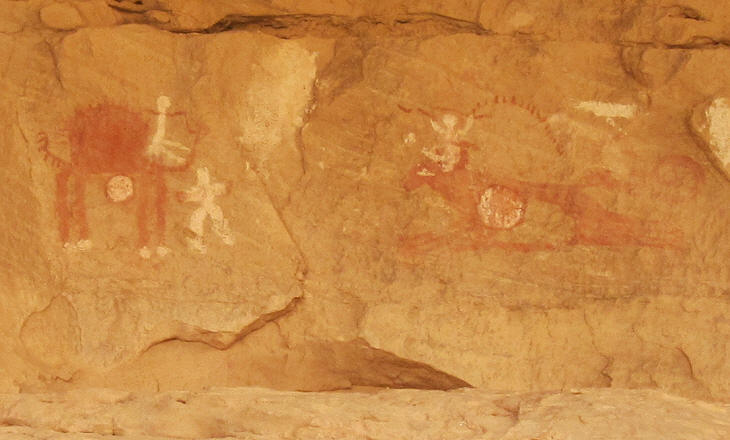 A domesticated camel and a chariot

The Garamantes were a tribe who controlled the region at the time of the Carthaginians and of the Romans; they were known for using chariots in warfare; this is a clear indication that the climate of the region was still different from the current one and that sand dunes did not cover most of the ground, as they do today. 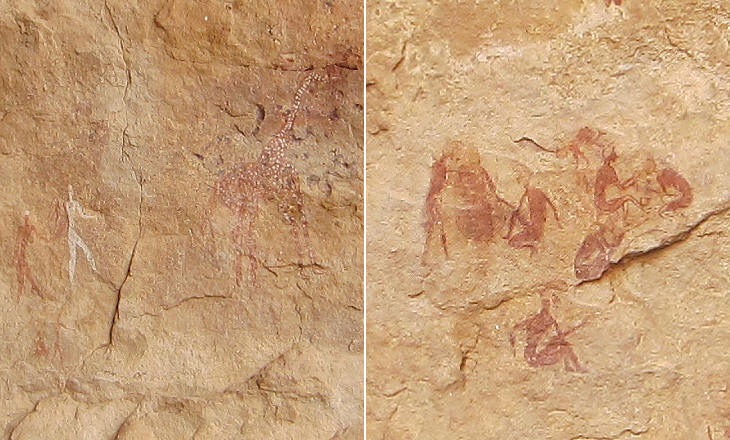 (left) Hunting a giraffe; (right) preparations for a wedding at Uan Amil

One of the most interesting paintings at Uadi Teshuinat depicts a series of scenes which are thought to represent preparations for a wedding; they are among the very few which are not related to animals; the women appear to be naked and this also is typical of African regions at a much lower latitude.