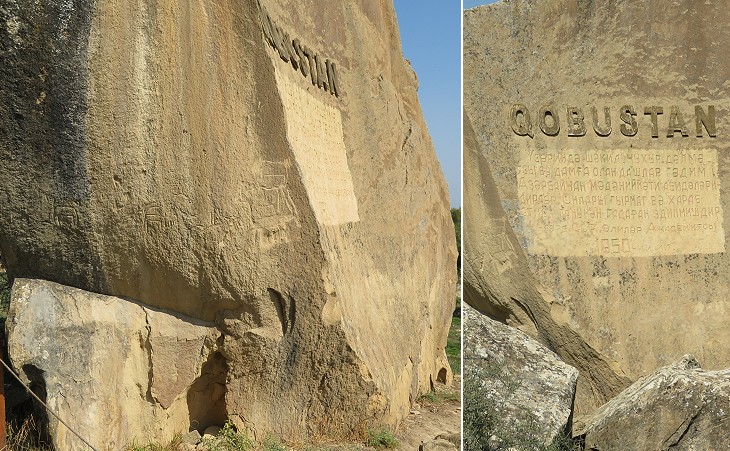 (left) Boulder with carvings at the entrance to the Qobustan National Park at Boyukdash; (right) 1950 inscription stating that no harm should be done to stones having shapes, holes, writings and brands on them

Gobustan has outstanding universal value for the quality and density of its rock art engravings, for the substantial evidence the collection of rock art images presents for hunting, fauna, flora and lifestyles in pre-historic times.
From the UNESCO synthesis of the universal value of Qobustan which in 2007 was included in the World Heritage List.
The reliefs were discovered by chance in 1930; in 1947 an archaeological campaign began their systematic study and inventory. 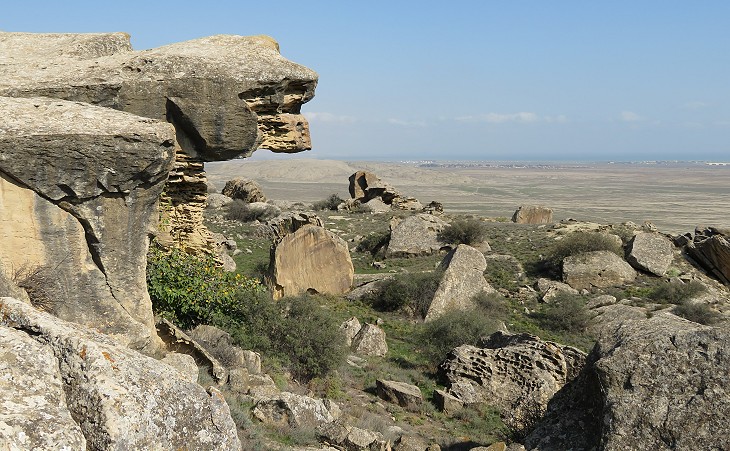 The Caspian Sea seen from the Park

The reliefs are spread over Qobustan, a region south of Baku which today is scarcely populated. It includes some remote inland mountains one of which is known as Yazylytepe (Hill with writing), a name which calls to mind Yazilikaya (Rock with writing) at Hattusa in Anatolia which houses many complex Hittite reliefs. 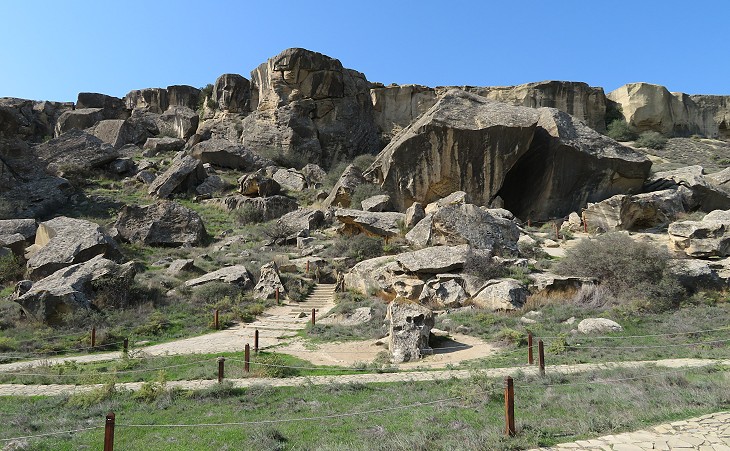 The knowledge of the site does not extend evenly across the whole rock art reservation. It would be desirable for a large-scale survey of the wider environment to be carried out to ensure the extent of protection needed to ensure the overall integrity of the rock art corpus. These areas need to be fully protected in order to ensure they keep their authenticity. UNESCO
The Qobustan National Reserve was established in 1966. The Park which is open to visitors is a rather small area on a terrace at the foot of Boyukdash, a hill near the coastline. Most of the carvings are on the sides of natural cracks in the rocks which were used as shelters; they are narrower than caves. One of the major risks for the conservation of the site is the addition of new carvings which are made as a joke or to show visitors more interesting or more easily visible reliefs. 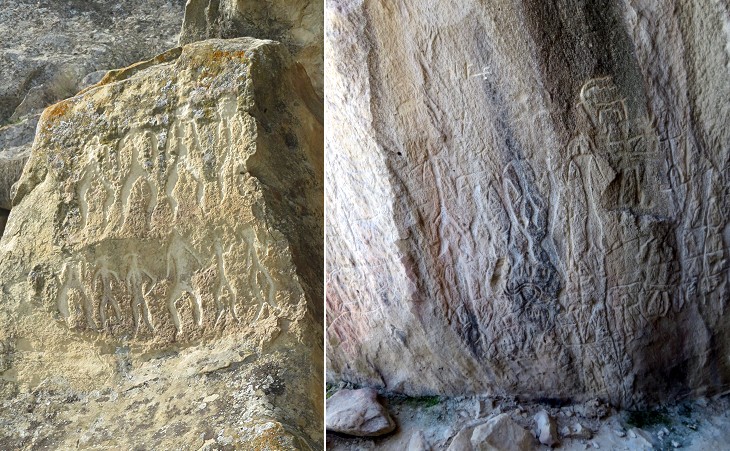 Carvings depicting human beings; the image used as background for this page shows a drawing in the local museum which is based on similar carvings

The rock engravings are an exceptional testimony to a way of life that has disappeared in the way they represent so graphically activities connected with hunting and fishing, at a time when the climate and vegetation of the area were warmer and wetter than today. UNESCO
A more striking example of how climate and vegetation changed since the appearance of human beings can be seen in rock carvings and paintings in the Libyan Desert. It is known that the level of the Caspian Sea varied over the millennia and some of the rocks bear evidence of fossil shells. 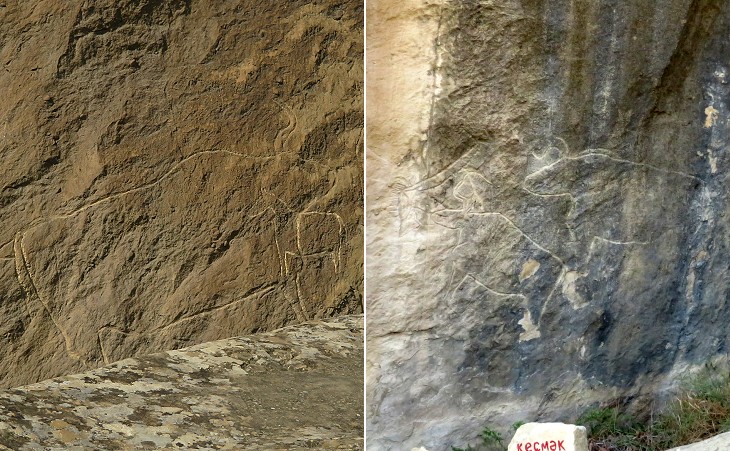 The carvings in the area which is open to visitors chiefly depict big cattle; in some instances they are associated with scenes of hunting, but it is likely that some of the carvings were made after these animals were domesticated. The dating of the reliefs is made more difficult by the fact that many boulders fell from their original location and their carvings are scattered about. Some of them are believed to be as old as the XVth millennium BC. 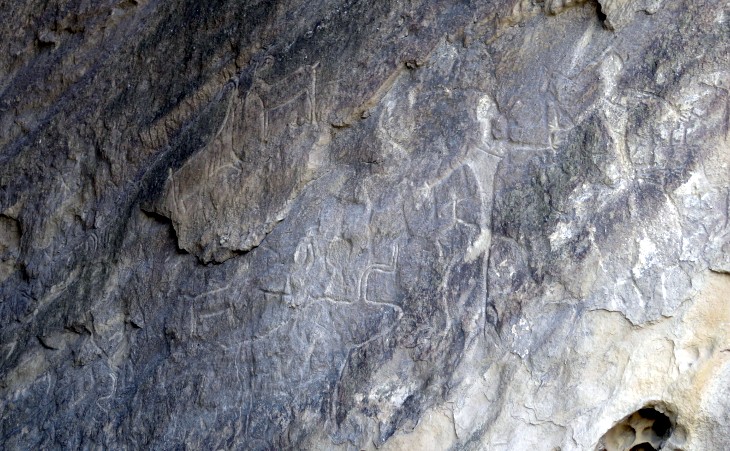 This carving has attracted the attention of archaeologists because the two anthropomorphic figures do not seem involved in hunting, although they are depicted next to an auroch and two goats. They could be a religious/symbolic representation of the first human couple. Similar rock carvings have been found also in the Absheron Peninsula, north of Baku. The purpose of the carvings was most likely a propitiatory one; by representing the animals which made up their staple food the hunters hoped to attract them to their place. 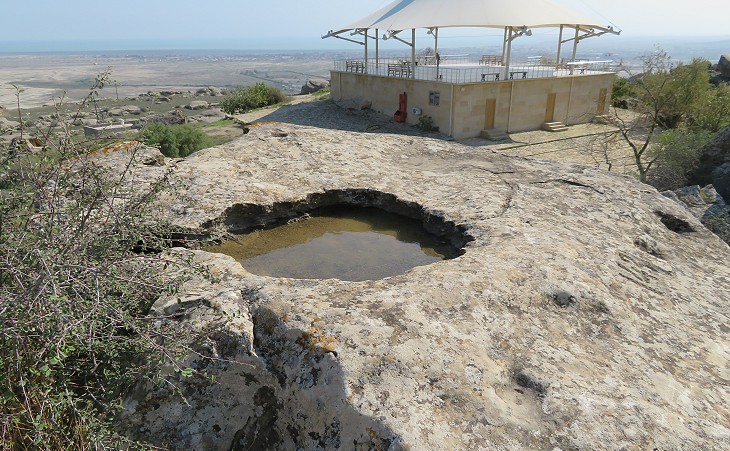 Some hollows on the eastern part of the terrace are thought to have been used for sacrifices; some of them are linked by channels through which blood could have passed. These hollows, in addition to some nearby sounding stones which could have been used as drums, brought to my mind an Apache war dance in a western movie which I saw when I was a boy. 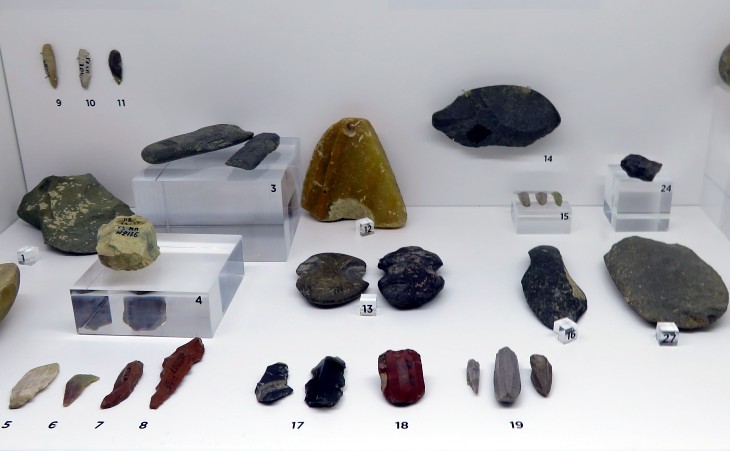 Museum at the site: stone tools which include blades, knives, scrapers and arrowheads

The museum houses a selection of the stone and bone tools which have been discovered in the large area where rock carvings were identified. 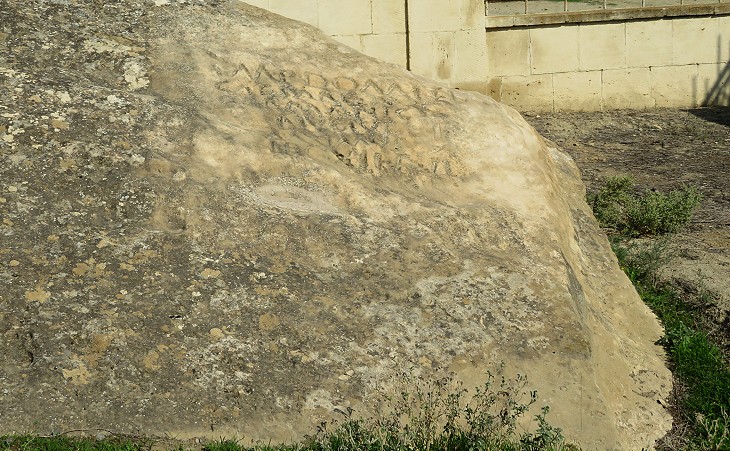 The object which attracts many visitors is totally unrelated with the prehistoric rock carvings: a fallen boulder bears a Latin inscription celebrating Emperor Domitian and mentioning Legio XII Fulminata. It was found in 1948 by Ishag Jafarzadeh who conducted the first campaigns in Qobustan. It is the easternmost inscription of the Roman Empire. No other evidence has been found of Roman presence in the area. The legion mentioned in the inscription had its headquarters at Malatya, in the proximity of Harput in Eastern Turkey where it protected the Empire's border on Armenia, a buffer state between the Romans and the Parthians. It is possible that a vexillatio, a regiment, was sent on a diplomatic mission to Albania, a country beyond Armenia, on the coast of the Caspian Sea. The regiment might have camped for a short period at Boyukdash where its commander ordered the carving of the inscription as a gathering point for the routine ceremonies which were held in honour of the emperor (see a barracks at Ostia).