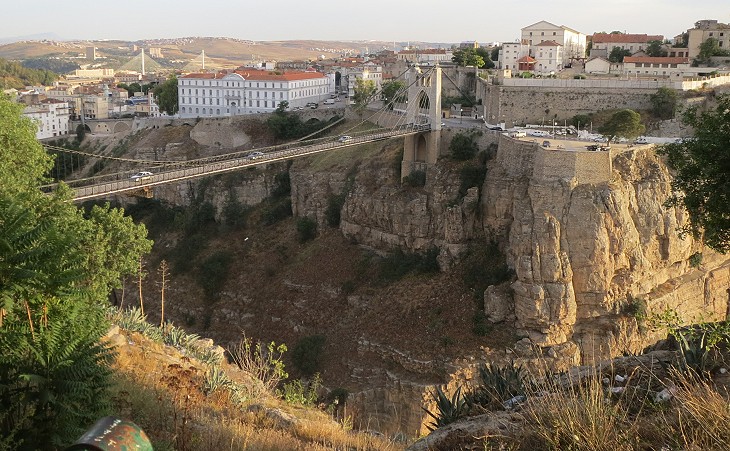 The Rock of Constantine

Of the citie of Constantina, No man can denie the Romans to have beene founders of this citie, that shall consider the great strength, height, and antiquitie of the walles, and how curiously they are beset and adorned with blacke stones. This citie standeth upon the south side of an exceeding high mountaine, and is environed with steepe rocks, under which rocks and within the compasse whereof runneth a river, so that the said deepe river with the rocks on either side, serveth in stead of a towne-ditch to Constantina. The north part is compassed with a wall of great thicknes: and there are two extreme narrow passages onely, to enter into the citie, one on the east part, and another on the west.
Leo Africanus - The history and description of Africa: and of the notable things therein contained - 1526 - 1600 translation by John Pory
Cirta, or Constantina as It was afterwards called is well situated by Pliny forty eight Roman Miles from the Sea. It is described in History to be one of the chief as well as one of the strongest Cities of Numidia; the first of which Circumstances, we find confirmed by the Extent of the Ruins: the latter by It's particular Situation. For the greatest Part of It hath been built upon a Kind of Peninsular Promontory, inaccessible on all Sides, except towards the S. W. This I computed to be a good Mile in Circuit, lying a little inclined to the Southward; but ending to the Northward in a Precipice of at least a hundred Fathom in perpendicular.
Thomas Shaw - Travels, or, observations relating to several parts of Barbary and the Levant - 1738
The situation of Constantine, cannot be thoroughly appreciated unless a walk be taken round the outside of the city, and we would advise the traveller to postpone his exploration of the streets until this has been done.
John Murray - Handbook for Travellers in Algeria and Tunis - 1895 (written by R. L. Playfair) 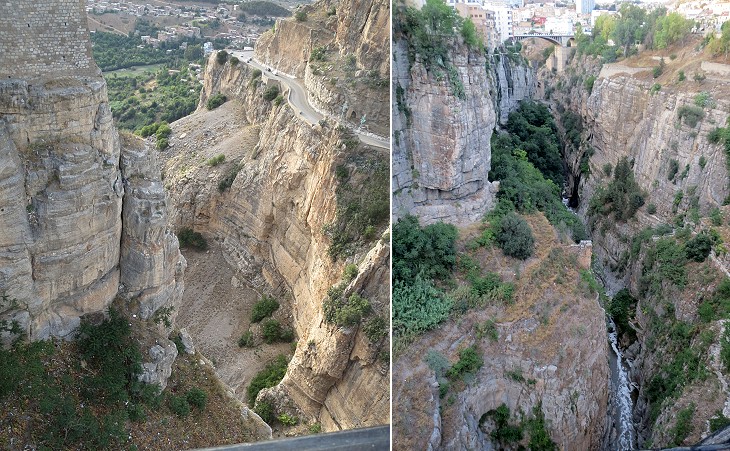 Views of the gorge of the Rhumel River

Constantine rises perpendicularly nearly 1,000 feet from the bed of the river Roumel, the ancient Ampsaga, which surrounds it on the north and east (..). The deep ravine through which the river flows varies in breadth from about 200 feet on the south-east side to nearly double that distance opposite the Kasbah, and it is spanned on the north-east side by four natural arches of rock, about 200 feet above the stream, one of which served as the foundation for the bridge of El-Kantara. Four other bridges spanned it in the time of the Romans, of which the traces are still visible, but the most important, and the only one remaining in modern times, was that just mentioned.
Travels in the footsteps of Bruce in Algeria and Tunis, illustrated by facsimiles of his original drawings; by R. L. Playfair - 1877 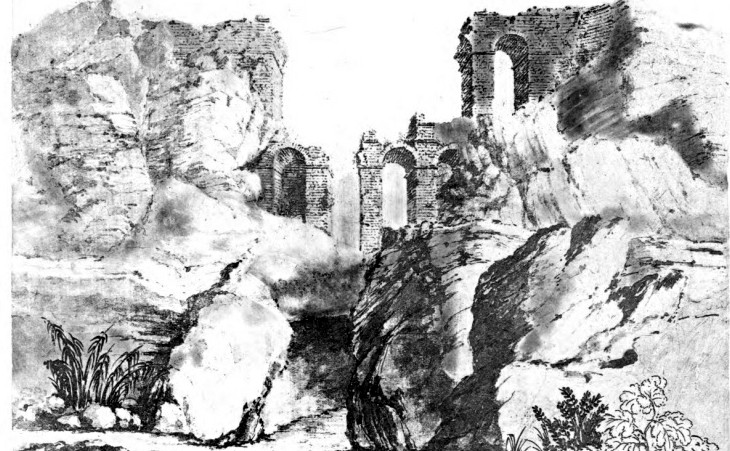 In this Direction the Peninsular Promontory (as I have called It) is separated from the neighbouring Plains by a deep narrow Valley, perpendicular on both Sides, where the Rummel conveys It's Stream, and over which there was formerly a Bridge of excellent Workmanship. Shaw
Bruce was the next traveller who describes it, and his is the most interesting of all, because it is pictorial. (..) It shows the condition of the bridge before its restoration by Salah Bey; it is the only sketch extant of the ancient structure. Playfair 1877
An excellent description of this arch has been left by El-Bekri, the Arab geographer of the 11th century, who says: "This bridge is of a remarkable structure, its height above the level of the water being about 100 cubits; it is one of the remains of Roman architecture; it is composed of five upper and lower arches, which span the valley. Three of these, namely those to the west, have 2 storeys, as we have said; they are intended for the passage of water, while the upper ones form a communication between the two sides of the ravine. Regarding the others, they abut against the mountain. These arches are supported by piers, which break the violence of the torrent, and are pierced at their summit by small openings. When there are extraordinary floods, which sometimes take place the water which rises above the top of the piers escapes by means of these orifices. This is, we repeat, one of the most remarkable buildings ever seen." Murray 1895 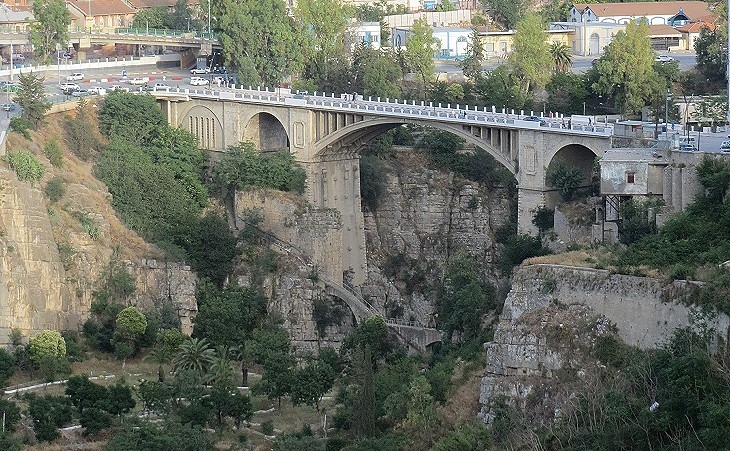 Subsequently it was thoroughly restored by Don Bartolommeo, an architect of Minorca, in 1793, during the reign of Salah Bey, with materials chiefly obtained from the destruction of other Roman edifices. It stood as he left it till 7 a.m. on March 18, 1857, when the pier of the upper stage nearest to the town suddenly gave way, with the two arches resting upon it. It was found impossible to restore it; the bridge was in consequence battered down with heavy artillery on the 30th of the same month. The substantial modern iron structure was built in 1863. Murray 1895 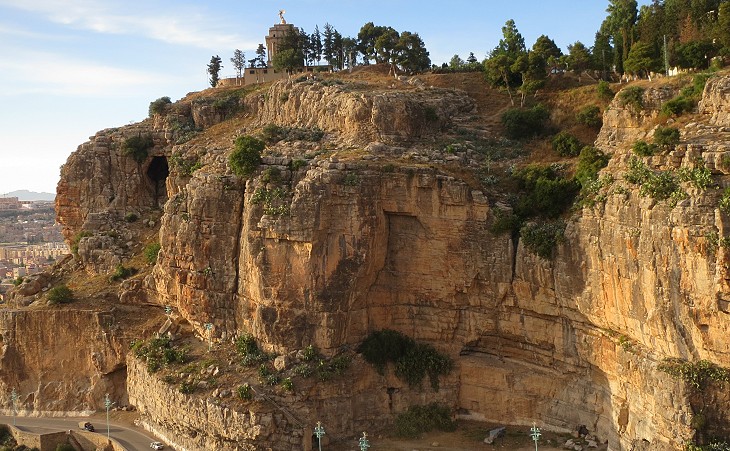 Without the citie stand many faire and ancient buildings. About a mile and a halfe from the citie standeth a certaine triumphall arch, like unto the triumphall arches at Rome which the grosse common people thinke to have beene a castle where innumerable devils remained, which (they say) were expelled by the Mahometans, when they came first to inhabite Constantina. Leo Africanus
Remains of other Roman buildings were mentioned by Shaw and Bruce but ... these have all disappeared. The French have done great things for Algeria, and the world owes them a deep debt of gratitude for having converted a nest of pirates and robbers into one of the most charming countries in the Mediterranean: but it is devoutly to be wished that they would do a little more for archaeology, or rather establish a strict conservancy of all the venerable ruins, which otherwise will soon disappear everywhere as completely and as unnecessarily as they have done at Cherchell and Constantine (and Lambaesis). Playfair 1877 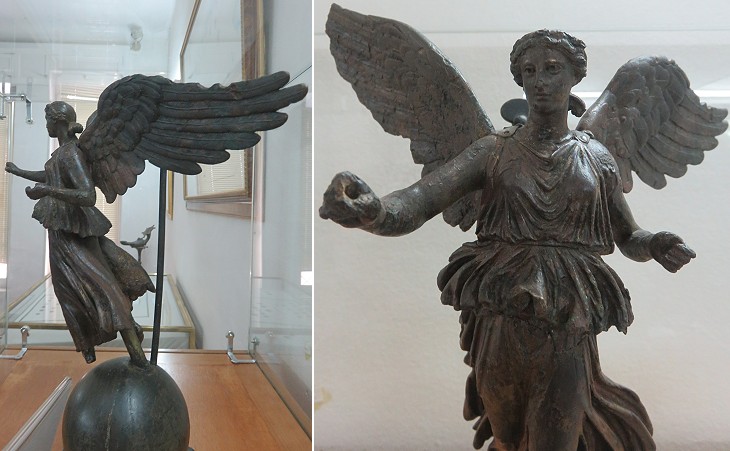 The Museum is in one of the rooms of the Mairie (Town Hall). It contains a collection of antiquities, some of which are exceedingly interesting, especially a bronze statuette of the winged figure of Victory, which was discovered beneath the Kasbah. This is one of the most exquisite objects of art ever found in Algeria. (..) Opposite the public garden, just outside the Porte Valee, is a collection of larger objects, such as statues, columns, tombstones, friezes, etc. (..) the inscriptions, some of which mention both Cirta and Constantina, will interest any one fond of antiquarian pursuits. Murray 1895 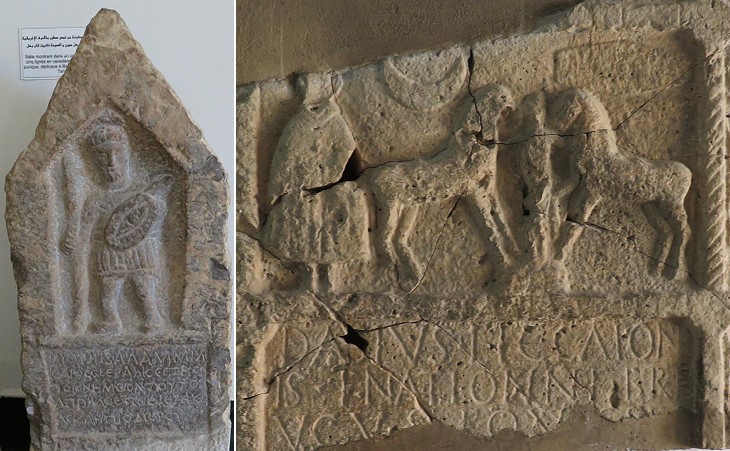 Museum of Constantine: (left) stela with a dedicatory inscription in Punic language, but written using the Greek alphabet to Baal-Ammon; (right) another stela with the symbol of Tanit (a half-moon)

A museum was inaugurated in 1931 to properly house the archaeological findings in the town and its environs. Cirta was founded by the Carthaginians, but it soon became an important town of the local tribes and the capital of the Kingdom of Numidia when Massinissa enlarged his territories at the end of the Second Punic War. The image used as background for this page shows a coin portraying Massinissa which is on display at the museum. In 46 BC Numidia was annexed to the Roman Empire (Africa Nova). Cirta acquired a special status as capital of a confederation of four towns. The museum houses some stelae which show the influence of Carthaginian beliefs on the inhabitants of Cirta even after the town became Roman. 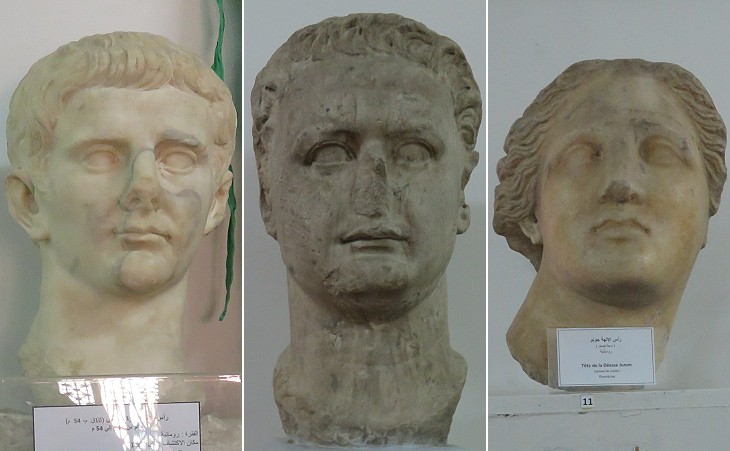 The museum houses a rare portrait of Domitian, most likely from the Forum of the town. After his assassination the Senate ordered his abolitio nominis, i.e. the cancellation of all references to him; his enlargement of the Forum of Rome was named after Nerva his successor. In some provinces of the Empire however one can come across statues which portray him (e.g. at Ephesus) and inscriptions where he is mentioned (e.g. at Phaselis). 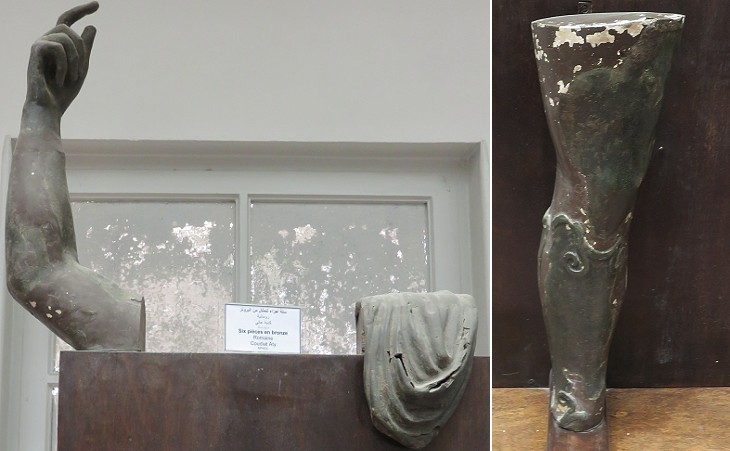 Museum of Constantine: bronze statue of an emperor

The museum displays six pieces of a gigantic bronze statue of an unknown emperor, because the head is missing. It was most likely an acrolith, i.e. a statue in which some parts were sculptured in marble or bronze and the rest of it in a less expensive material (painted wood or gipsum).
Two gigantic acroliths of Emperor Constantine in marble and bronze have been found at Rome and it is possible that the emperor was similarly celebrated also at Cirta because he favoured the reconstruction of the town after it had been damaged during the wars which followed the abdication of Emperor Diocletian and he renamed it Constantina. 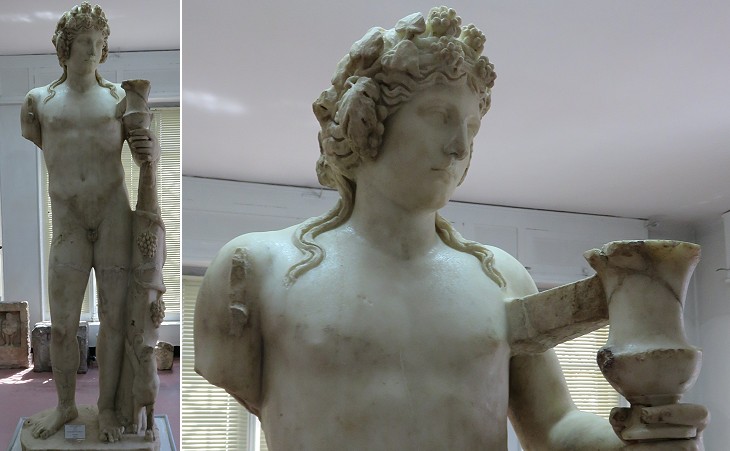 Museum of Constantine: statue of Bacchus (the nose is modern - see a statue from Carthage)

The finest exhibit of the museum is a statue of Bacchus, or rather of Dionysus, his Greek counterpart. In the IInd century AD it was a highly popular subject especially for the decoration of large monumental fountains (e.g at Sagalassos), rather than for the cella of a temple. This statue was found in 1868 with a broken inscription with the words Latiari Libero Augusto Sacrum, which has since disappeared. Most likely Latiari was preceded by Iovi, because Jupiter Latiaris (of Latium) was one of the early attributes of the god. The statue was perhaps one of a group. Bacchus/Dionysus was worshipped in many towns of Northern Africa under the name of Liber Pater, e.g. at Sabratha. 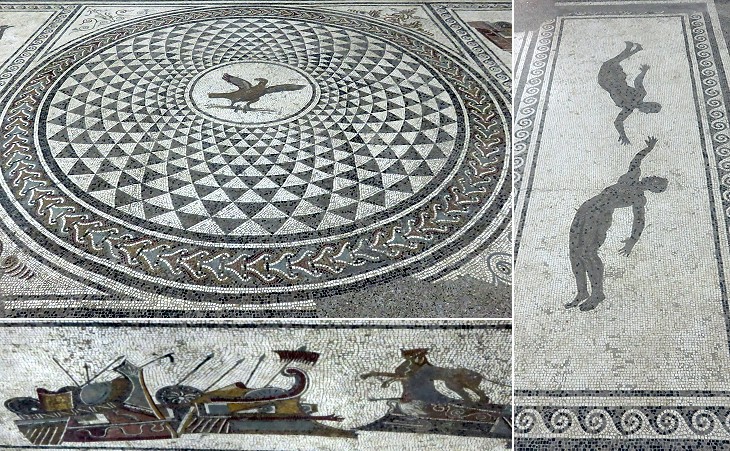 Museum of Constantine: floor mosaic with a central geometric pattern and at the sides scenes of naval fights and silhouettes of swimmers

At 2 kil. from the village, in the property of the Comte de Tourdonnet, have recently been found the remains of a very magnificent Roman bath, evidently belonging to the villa of a wealthy landowner named Pompianus. The mosaics, an exact copy of which was sent to the Paris Exhibition of 1878, and which will probably be published by the Archaeological Society of Constantine, are by far the finest and most interesting that have yet been found in Algeria. Murray 1895
Some of the mosaics on display at the museum show the level of refinement of the upper classes of Cirta, as in the case shown above where different typologies of mosaics (geometric with an optical effect, coloured, black and white silhouette) are skilfully mastered. 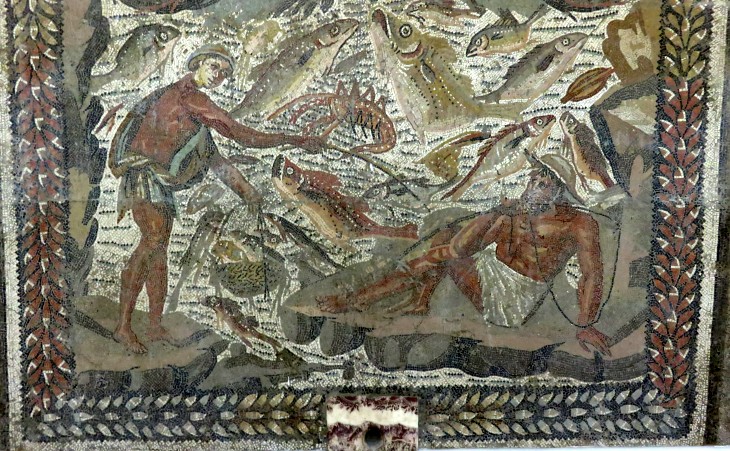 Museum of Constantine: detail of a floor mosaic portraying anglers

Mosaics depicting sea creatures were popular throughout the Roman Empire as one can see in the mosaics of Antioch and many other locations. In Northern Africa they often portrayed anglers (usually wearing a hat); see those at the museums of Tripoli in Libya and of Tunis; you may wish to see also an angler on a silver bowl found at Tipasa. 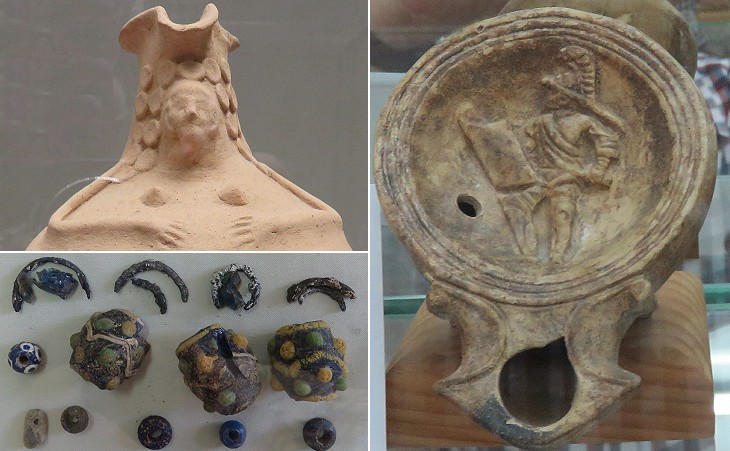 Museum of Constantine: other exhibits (you may wish to see another lamp depicting two gladiators at Vienne in France)