You may wish to read an introduction to this section or page one first.

In 117 AD Emperor Hadrian signed a peace treaty with the Parthians which lasted for more than forty years and helped the economic development of the eastern provinces of the empire. Tellus Stabilita (global stability) is the title of the chapter covering Hadrian's policy of consolidating the existing borders of the Empire in Memoirs of Hadrian by Marguerite Yourcenar. 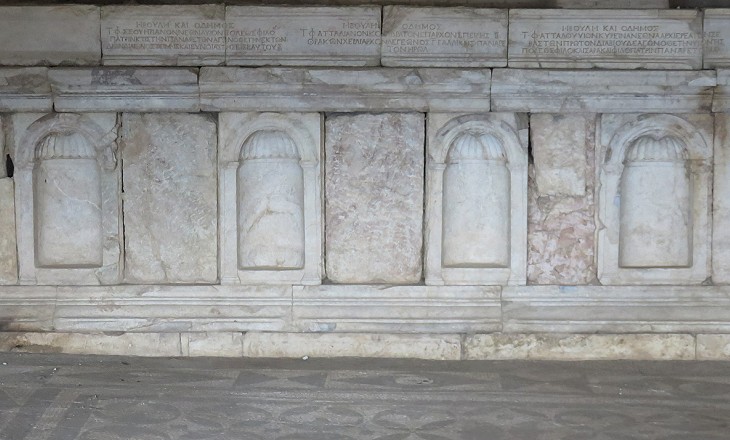 Hadrian promoted the construction of new roads, aqueducts, fortifications, granaries, libraries and many other facilities throughout the Empire. In Sagalassos, similar to what occurred in many other towns, local wealthy individuals felt they had to contribute to the well-being of their community.
Members of the Neon family acquired Roman citizenship at the time of Emperor Vespasian and in ca 120 AD they decided to build a public library near the Hellenistic Fountain. The hall was decorated with niches above which inscriptions provided information on members of the family and the public offices they held. 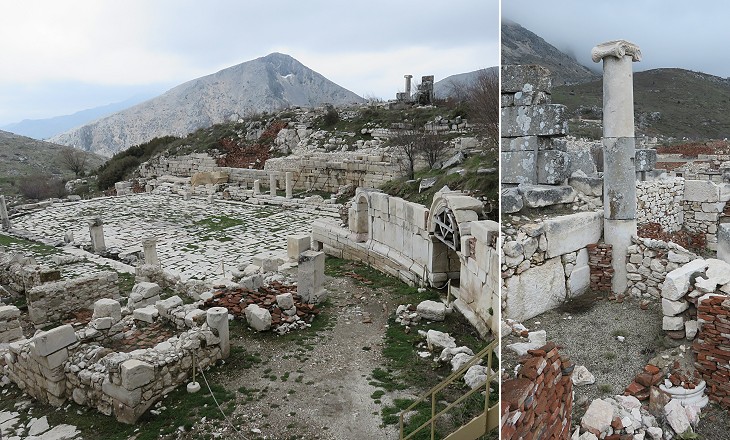 In the main provincial towns a flamen was appointed to preside over the ceremonies related to the "imperial cult" which were meant to strengthen the allegiance to Rome. Prior to the construction of a large Temple to Hadrian and Antoninus Pius, these ceremonies took place at a temple built during the reign of Emperor Augustus and having a commanding view over the Lower Agora. It was dedicated to Apollo because Augustus had a special devotion for that god, to the point that he built a temple to Apollo in his House on the Palatine Hill in Rome. 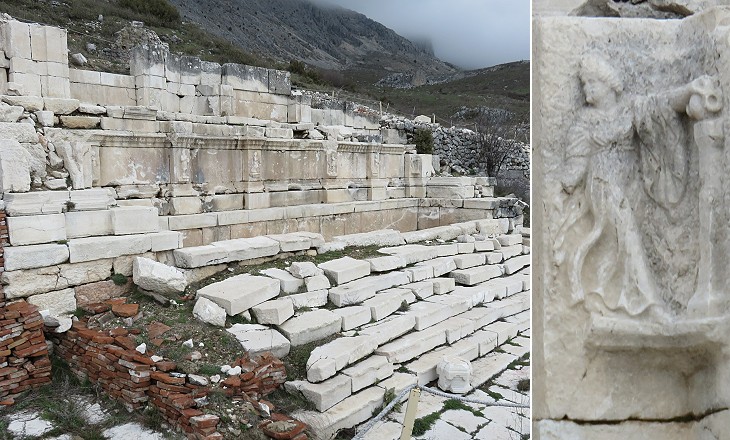 (left) Hadrian's Nymphaeum in the Lower Town; (right) corner relief depicting a woman holding a water vessel, the other reliefs portray some of the Muses

Monumental fountains were a symbol of the wealth of a town and the team of archaeologists at Sagalassos has found evidence of three of them built in the course of a century. The oldest one was built in 129-132 and it was dedicated to Emperor Hadrian. 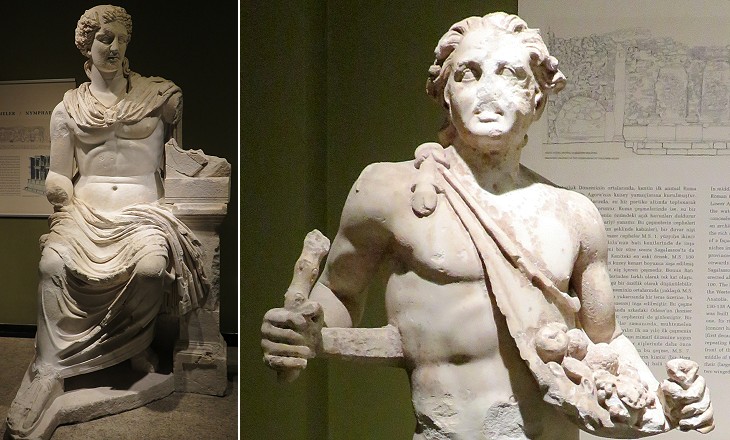 Archaeological Museum of Burdur: statues of Apollo Citharoedus (left) and of a satyr (right) from Hadrian's Nymphaeum

The fountain was built by Tiberius Claudius Piso, the first Roman eques (knight) of Sagalassos, and, consistent with the dedication to Apollo of the nearby temple, it housed a gigantic statue of the god playing a cithara (lyre). The fountain most likely collapsed in 513 because of a major earthquake.
The statues found at the nymphaeum are of high quality and according to archaeologists they were made in three different workshops. 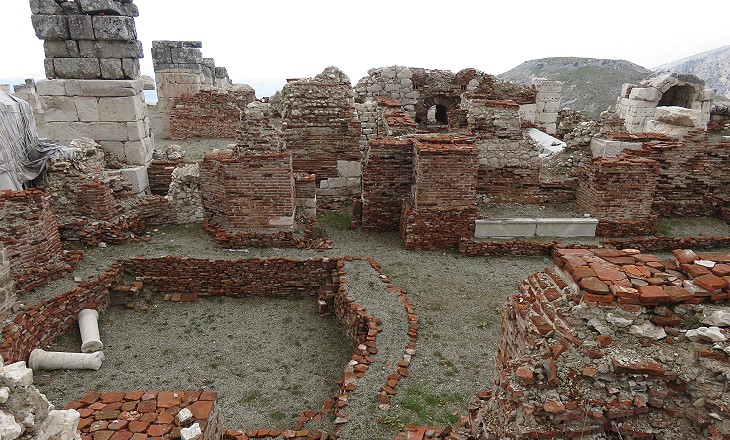 Great Baths in the Lower Town

Excavations in the eastern side of the Lower Agora unearthed a very large bath complex which included a smaller older structure of the early Ist century AD. The construction of the new baths began in ca 120 and ended in ca 165. It was a luxury establishment; its halls were made of thick walls of concrete and bricks and were decorated with marbles. The exterior was faced with large stones. 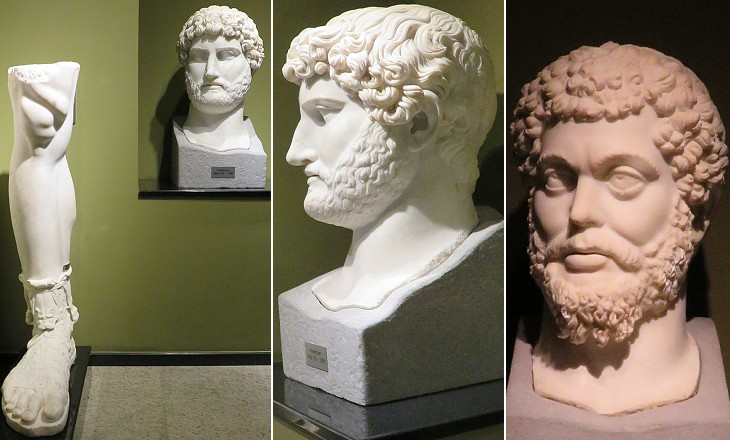 Archaeological Museum of Burdur: fragments of gigantic statues of Emperors Hadrian (left) and Marcus Aurelius (right) from the Great Baths (see enlargements of the leg and foot in "Roman Feet and Sandals")

In 2007 archaeologists were rewarded for their hard work by the discovery of the head of a gigantic statue. They did not need to search for inscriptions to determine the person portrayed: it was Emperor Hadrian. Other fragments of this statue and other statues of members of the imperial family came to light during that excavation campaign and that of the following year. They were not found in the large hall where they were initially placed, but in a dressing room, where they were moved during a redesign of the baths which occurred in ca 400. The decision of relocating the statues to a less prestigious room was an effect of the compulsory move to Christianity decreed by Emperor Theodosius in 392. Eventually all emperors before Constantine were regarded as persecutors of the martyrs and almost all the statues which portrayed them were torn down or the faces were smashed, with some remarkable exceptions, e.g. the equestrian statue of Marcus Aurelius in Rome. 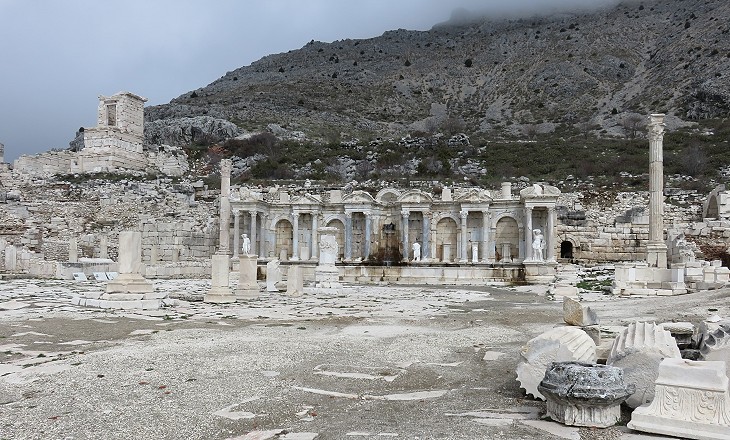 Sagalassos is already labelled as the "New Ephesus". The reconstruction of the grand Antonine Nymphaeum may provide it with that unique monument (similar to the Library of Celsus at Ephesus) capable of attracting a very large number of visitors. 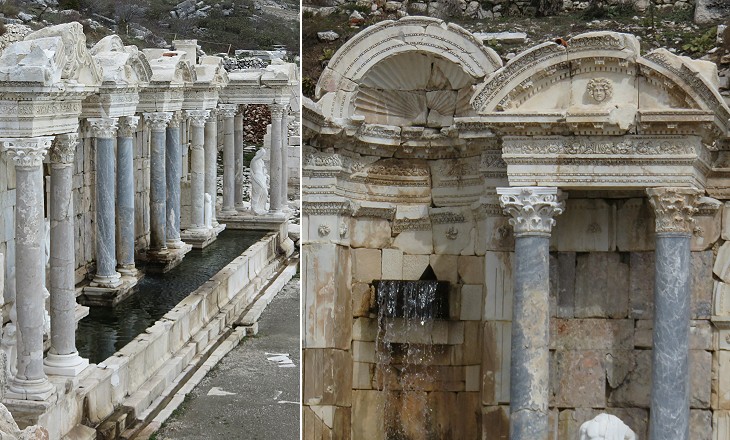 The two Antonines governed the Roman world forty-two years with the same invariable spirit of wisdom and virtue. (..) Their united reigns are possibly the only period of history in which the happiness of a great people was the sole object of government.
Edward Gibbon - The History of the Decline and Fall of the Roman Empire - 1788
Gibbon made reference to the reigns of Antoninus Pius and Marcus Aurelius, his son-in-law. The Age of the Antonines is a term used by historians which very often includes the reigns of Nerva, Trajan and Hadrian and that of Commodus, Marcus Aurelius' son. A typical aspect of the monuments built during the Age of the Antonines is the use of coloured marbles. The reconstructed nymphaeum is a beautiful example of the care and taste by which the marbles were chosen. 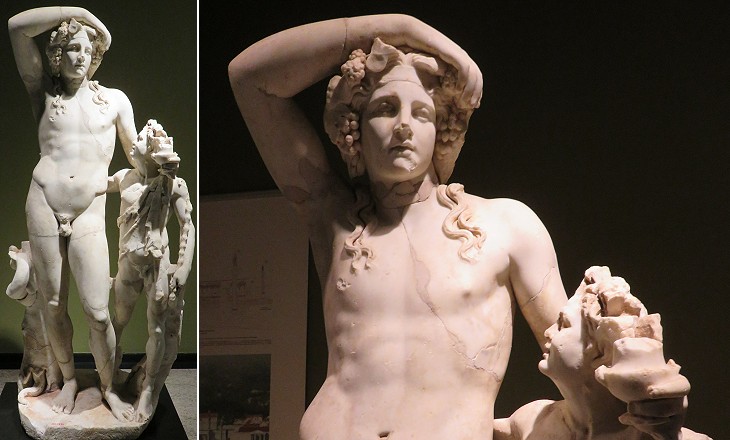 Archaeological Museum of Burdur: statue of Dionysus from the Antonine Nymphaeum of Sagalassos; see similar statues of the god at Ephesus and Rome

The second of his names we will hear about today is Lysios, the 'loosener', 'liberator', 'releaser', the untier of knots and bonds. This name is cognate with the practice which we perform, psycho-ana-lysis. Lysis, lysios. (..) The most famous land of Nysa, where it is said he was brought shortly after his birth, to protect him from the persecutory wrath of Hera, is in Asia, in ancient Lydia or Phrygia, western or Anatolian Turkey. It is there that he is raised by an all-female society of nursing nymphs who become his mothers, lovers, devotees and attendants, the Maenads, the mad women followers of Dionysos.
Gary D. Astrachan in Other/Wise - Journal of the International Forum for Psychoanalytic Education - 2014
Francis Vyvyan Jago Arundell, chaplain to the English factory at Smyrna, who visited and described the ruins of Sagalassos in November 1833, did not see this statue. Had he seen it he would have regarded it as a clear indication of Roman debauchery, because it was so different from the canons of Classical Greek art. He would have found its nudity to be obscene especially considering that it was placed in the main square of the ancient town. Yet Dionysus' stare is very intriguing. 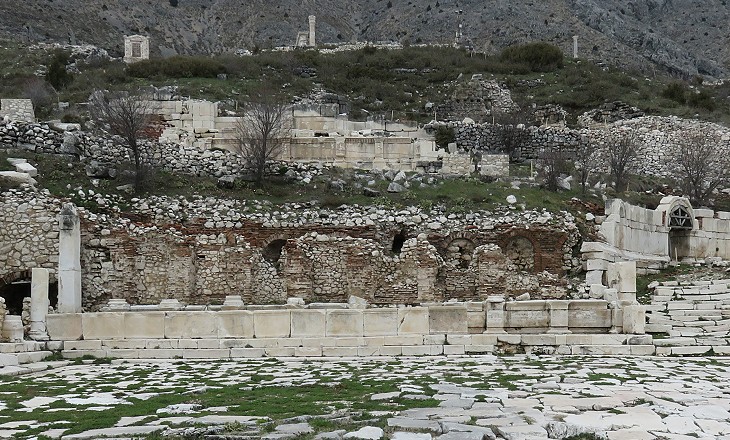 Gibbon was not the first one to highlight the positive image of the Antonines. Emperor Septimius Severus, who had no family bonds with them, claimed in many celebratory inscriptions to descend from them (you may wish to see an inscription which eventually ended up in the Great Mosque of Kairouan). His elder son was named Marcus Aurelius Antoninus, but he was so disliked that he passed to history as Caracalla, after a short Gaul tunic he used to wear. They both continued the "building policy" of the Antonines to increase their popularity. 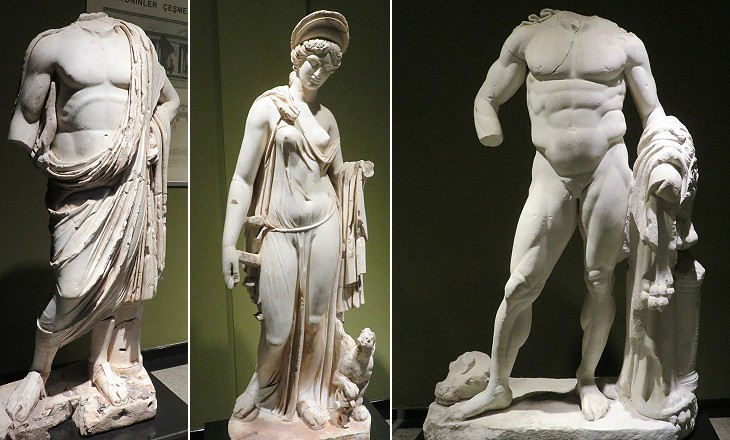 Archaeological Museum of Burdur: (left to right) statues of Asclepius and Nemesis (from Sagalassos) and Hercules (from Cremna)

The Archaeological Museum of Burdur, the capital of the vilayet (province) where Sagalassos is situated, has undergone a renovation of its interior in order to properly house the many statues and reliefs which were found at Sagalassos. Beams of light are activated by visitors approaching the exhibits. It is a spectacular way to enhance the impact of statues and reliefs. There are however some cons because the picky visitor who wants to walk around a statue to see its back, comes out from the area which activates the light-beams. Goethe however would have been happy with it: The custom of visiting the great Roman museums by torchlight seems to have still been fairly recent in the eighties of the last century, but I do not know when it first started. There are several things to be said in favour of this kind of illumination: first, each work of art is seen by itself, isolated from all the others, so that the spectator's attention is exclusively focussed on it; second, in the bright light of a torch, the finer nuances of the work become more distinct, the confusing reflections (particularly annoying on highly polished statues) disappear, the shadows become more marked and the illuminated parts stand out clearer.
J. W. Goethe - Italian Journey - Translation by W. H. Auden and Elizabeth Mayer 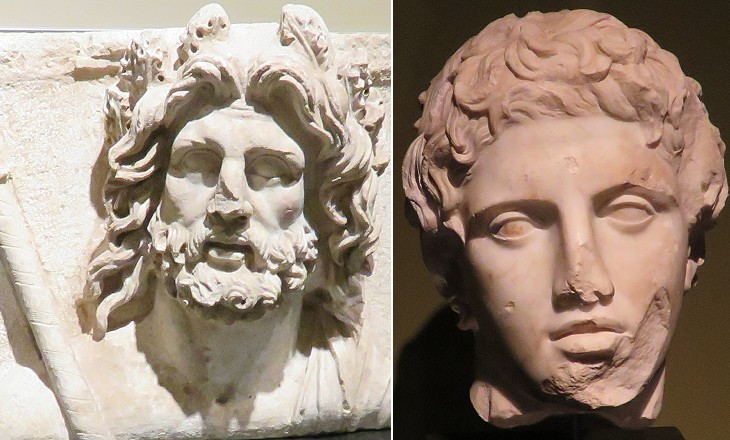 Archaeological Museum of Burdur: head of Jupiter (left) and of an unknown person (right) from Sagalassos

The image used as background for this page shows a relief portraying a bust on the keystone of a niche in the Lower Agora.

Return to page one or move to:
Introductory page
Isparta
Egirdir
Afyonkarahisar
Kutahya