Chiesa di S. Maria in Campo Carleo
(Vasi at work in the Grand View of Rome) 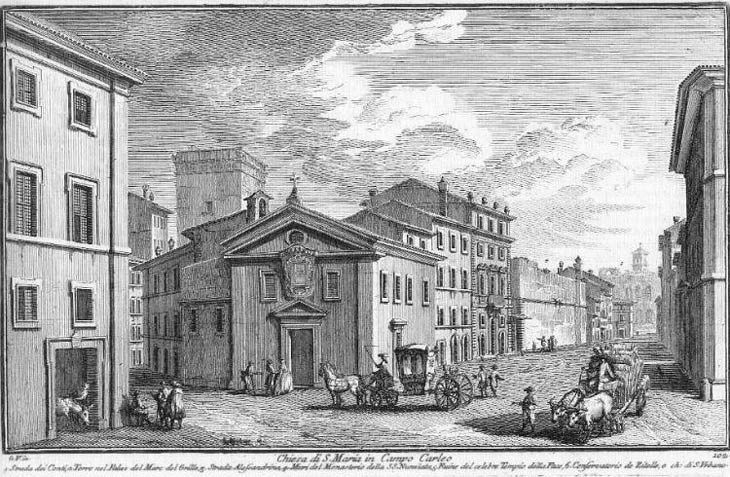 In his choice of subjects for his 1756 book on the parish churches of Rome, Giuseppe Vasi included S. Maria in Campo Carleo on the grounds that it had been one of the first parish churches of the city. The unassuming building however was not an ancient one and it is not known to have contained ancient columns or capitals. In retrospect we must thank Vasi for his choice because his etching depicts a neighbourhood which does not exist any longer. The origin of Campo Carleo is uncertain: it is thought that either a Byzantine officer named Kaloleon or a Carolo Leonis had their residence in the area.
The view is taken from the green dot in the small 1748 map here below. In the description below the plate Vasi made reference to: 1) Strada dei Conti; 2) Tower of Palazzo del Marchese del Grillo; 3) Strada Alessandrina; 4) Walls of Monasterio della SS. Nunziata; 5) Ruins of Tempio della Pace (at the end of the street); 6) Chiesa di S. Urbano. 2) and 4) are shown in detail in other pages. The small map shows also 7) S. Maria in Campo Carleo. The Parish of S. Maria in Campo Carleo was abolished by Pope Leo XII in 1825 and the church was pulled down in 1884. Strada Alessandrina is still there, but all the buildings, including S. Urbano, which flanked it were demolished in 1932. The street was named after Cardinal Michele Bonelli, known as Cardinal Alessandrino because he came from Alessandria, a town in northern Italy. He lived in a nearby palace; between 1567 and 1570 he promoted the draining of a swamp at Arco dei Pantani and the opening of a new street between Piazza della Colonna Trajana and Tempio della Pace. 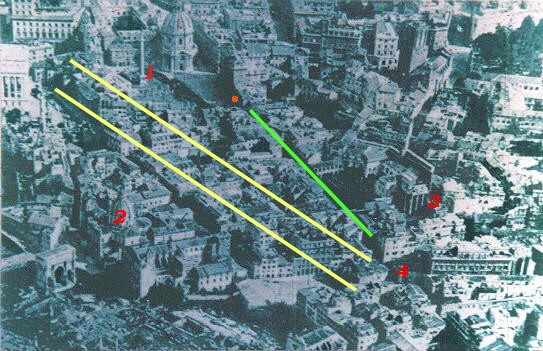 Aerial view before 1932; the red dot is the point from which Vasi took his view; 1) Colonna Traiana; 2) SS. Luca e Martina; 3) Arco dei Pantani; 4) Tempio di Pallade. The green line shows Strada Alessandrina and the yellow lines indicate the approximate route of the first section of Via dell'Impero (today Via dei Fori Imperiali)

A number of buildings in this part of Rome were demolished in order to allow archaeological excavations, but the decision to pull down the whole neighbourhood was taken for political purposes. A new large avenue was opened to link Palazzo Venezia, from which Prime Minister and Fascist Duce (Leader) Benito Mussolini delivered his most important speeches, with Colosseo, the symbol of Ancient Rome. Via dell'Impero was inaugurated on the tenth anniversary of the Fascist seizure of power (October 28, 1922). (left) A photo of the western side of Strada Alessandrina before 1932; (right) underground walls of S. Urbano

According to Antonio Munoz, the Superintendent in charge at the time of the excavations, the churches and houses which were pulled down had no significant historic or artistic value, the only exception being the Late Renaissance house of Flaminio Ponzio (the building with a balcony on the left side of Strada Alessandrina in the etching by Vasi). Its façade was reassembled in Piazza di S. Maria in Campitelli. 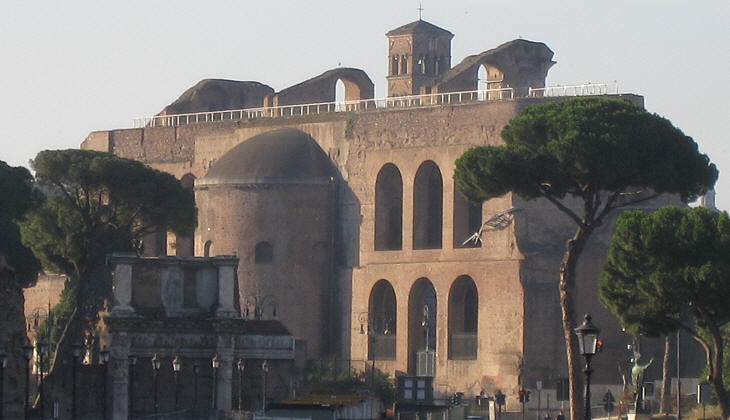 Rear view of Basilica di Massenzio and behind it the bell tower of S. Francesca Romana (in the foreground Tempio di Pallade)

Hard by (S. Francesca Romana) stands the Temple of Peace, that is, some remnants of that Temple. It was once the most noble of all the Temples (as the pillar before St. Mary Majors great Door, which belonged to this Temple, sheweth) it was 200 Foot large, and 300 long: but now little signs of its Beauty remain: Wars and time defacing the monuments of Peace.
Richard Lassels' The Voyage of Italy, or a Compleat Journey through Italy in ca 1668 The three vaults would certainly seem part of the Temple of Peace. (..) Even Nardini has no doubts here. But the modern antiquaries are determined to dispute about what part of the temple these huge vaults may be said to represent; a treasury, a Pinacotheca, perhaps a bath, or any other building of the Forum of Peace. The great excavations in 1812 discovered immense masses of marble, but nothing to assist conjecture. This part of Rome must have been abandoned for many centuries, in order to form the accretion of soil at the back of these vaults, which slopes into an embankment of hanging gardens.
John Cam Hobhouse - Dissertations on the Ruins of Rome - 1818 The large building which until the early XIXth century was called Tempio della Pace is now thought to be a basilica built by Emperor/Usurper Maxentius in 306-312 and completed by Emperor Constantine. The actual Templum Pacis has been identified in the foundations of Monastero dei SS. Cosma e Damiano and some of its columns have been re-erected.
The basilica was divided into three naves by eight gigantic pillars. Each of them was decorated with a column. In 1613 the only standing column was removed by Pope Paul V who placed it opposite S. Maria Maggiore. The remaining part of the basilica corresponds to the northern nave, which included a side apse.

(left) Maps highlighting the expansion of the Roman Empire on the back of Basilica di Massenzio; (right) detail of the vaults, with a pattern which can be noticed also in halls of the Baths of Diocletian; the coffered ceiling was a construction technique aimed at reducing the weight of the vault (see that of Pantheon)

The colossal vaults and their decoration were a source of inspiration for many artists (you may wish to see the ceiling of S. Carlo alle Quattro Fontane by Francesco Borromini). The maps showing the expansion of the Roman Empire were added in the 1930s (there used to be also another map showing the short-lived Italian Empire which was declared after the conquest of Ethiopia in 1936). 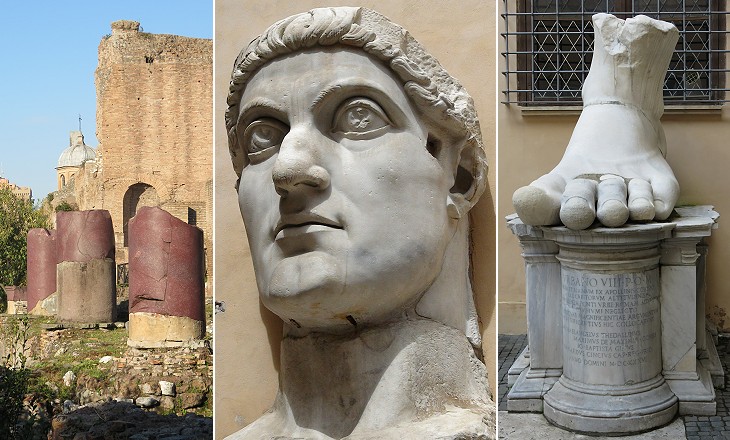 (left) Fragments of porphyry columns at the southern entrance to the basilica; (centre/right) Musei Capitolini: marble parts of a colossal statue of Emperor Constantine which stood in the basilica (a hand was found at Circus Maximus and you can see it in the image used as background for this page, the holes in the head indicate the presence of a bronze crown)

It is generally believed that the statue of Constantine was an acrolith (from the Greek words meaning height/extremity and stone) i.e. the head, the arms and the legs were made of marble, whereas the clothed parts of the body were made of wood or bronze. It was not a new development in sculpture because this technique had been used by Phidias at Olympia in the Vth century BC; you may wish to see another colossal (bronze) head inside Musei Capitolini and other colossal heads at Djemila in Algeria.