S. Maria in Macello Martyrum
(Vasi at work in the Grand View of Rome)

Links to this page can be found in Book 3, Day 3 and Rione Monti. 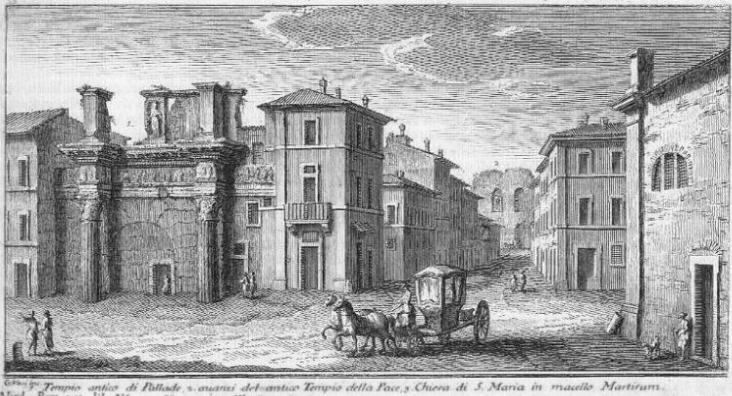 In this 1753 etching Giuseppe Vasi showed the last section of Strada Alessandrina which he depicted in its entirety in Plate 102 in 1756. The apparent subject of the plate is a minor church named after the slaughter (Macello) of some martyrs (Martyrum), which supposedly took place in this area; Vasi shows only the side of the church, because the remaining columns of a Temple to Pallas Athena (Minerva) are his true objective.
The view is taken from the green dot in the small 1748 map here below. In the description below the plate Vasi made reference to: 1) Tempio Antico di Pallade; 2) Ruins of Tempio della Pace (actually Basilica di Massenzio); 3) S. Maria in Macello Martyrum. 2) is shown in another page. The small map shows also 4) Palazzo del Pio Istituto Rivaldi. 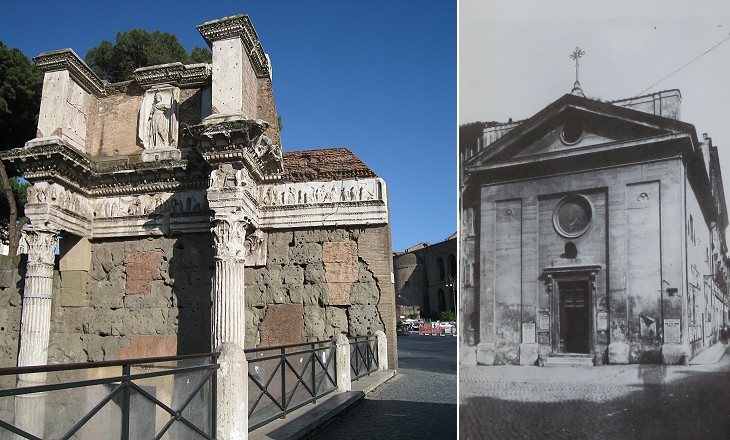 (left) The view in June 2009 (see it on a painted XVIIIth century door at Casino di Villa Borghese and in a 1905 painting by Alberto Pisa); (right) S. Maria in Macello Martyrum before 1932

In 1932 the whole neighbourhood including the church was pulled down. Excavations were carried out and then partially covered to open Via dell'Impero (today Via dei Fori Imperiali), a large avenue between Piazza Venezia and Colosseo; the ancient columns were included in an archaeological area which is not usually open to the public, but is visible from Strada Alessandrina.
S. Maria in Macello Martyrum was also known as S. Agata dei Tessitori because it belonged to the guild of the Weavers (see a list of churches belonging to a guild). 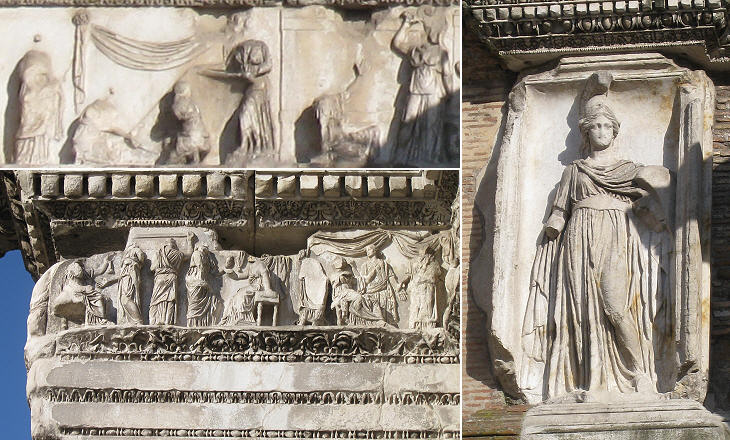 (left-above) Detail of the central relief including a scene portraying Athena in the act of cursing Arachne (far right); (left-below) detail of a side relief; (right) portrait of the goddess

The Temple to Pallas Athena was referred to as "Le Colonnacce" (the ruined columns). The reliefs show women involved in activities such as weaving which were protected by the goddess. Some scenes are thought to represent the myth of Arachne, a princess of Lydia of whose weaving skills Athena was envious. The goddess checked a cloth woven by Arachne in the hope of finding a fault; when she realized there were not any, she became upset and eventually she turned Arachne into a spider. The myth probably reflects a commercial war between Athens and Miletus, a Lydian town known for its dyed woollens. 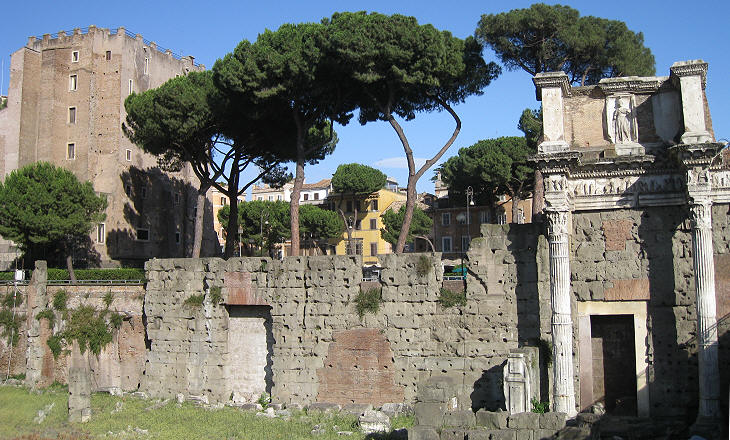 Wall of the Forum and in the background Torre de' Conti

Actually the columns did not belong to a temple, but to a portico which surrounded a Forum built by Emperor Domitian and completed by Emperor Nerva. It is also known as Foro Transitorio because it linked Basilica Aemilia in the Roman Forum with Foro di Augusto and therefore part of it is covered by Via dei Fori Imperiali. The remaining part of a temple which stood at its northern end was pulled down in 1612 by Pope Paul V to use its columns for Acqua Paola, the large fountain he built on the Janiculum. 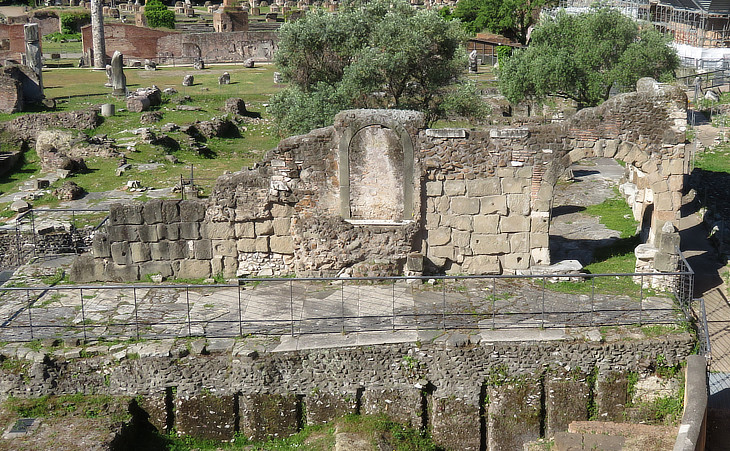 In recent years parts of the southern part of the Forum which were covered by gardens in 1932 were made visible again. 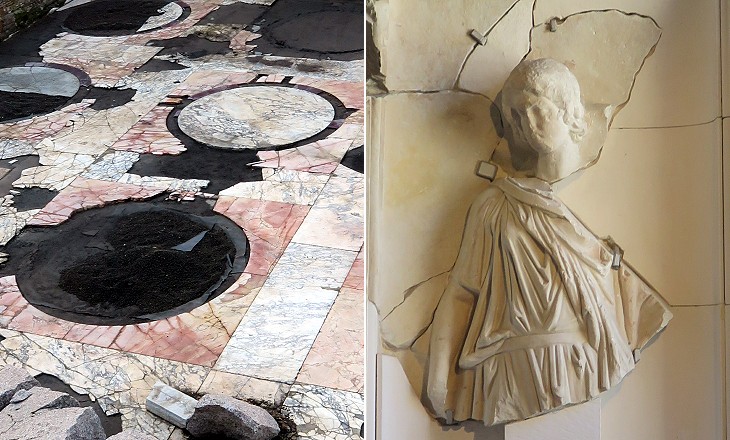 (left) Floor of the southern part of the Forum; (right) Exhibits at Mercati di Traiano: fragments of a relief portraying a Province which were found in 2000 in the Forum

The palace was initially designed by Antonio da Sangallo in the first half of the XVIth century and then modified when it was acquired in 1567 by Cardinal Alessandro de' Medici (Pope Leo XI). In 1662 it was bought by a charity and turned into a hospice. In 1932 it lost most of its large garden and later on it was abandoned because of a possible collapse.
In the section of Via dei Fori Imperiali adjoining the remaining garden of the palace there is a modern fountain: its ancient upper basin was found in 1696 near Ostia and it was initially used to embellish the courtyard of Palazzo di Montecitorio. 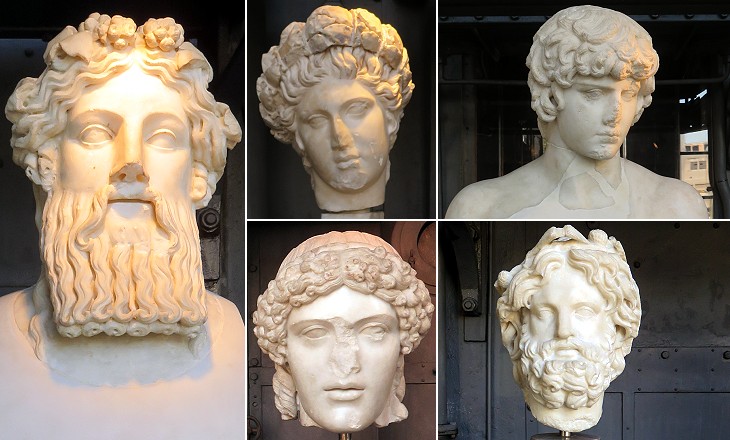 Centrale Montemartini: (left) Archaic Dionysus; (centre) two heads of Apollo; (right-above) Antinous, the favourite of Emperor Hadrian; (right-below) Silvanus, a Roman god of agriculture. These heads of statues were found in the 1930s during the excavation of the garden of Palazzo del Pio Istituto Rivaldi. They belonged to a rich Roman house of the IIIrd century AD

The image used as background for this page is based on a 1756 etching by Giovanni Battista Piranesi.