- Cuicul: Christian Quarter and Museum
(detail of a mosaic at the Museum of Cherchell)

You may wish to see an introductory page to this section or pages on the Old and Severian Towns first. 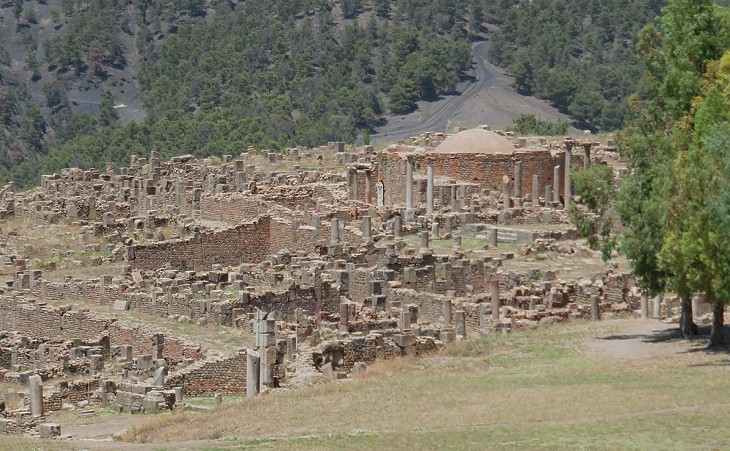 Christian neighbourhood seen from the entrance to the archaeological site

The dead city is at the end of a long, twisting road which seems to promise it at each turning and appears thereby so much the longer. When, on a faded tableland sunk among high mountains, its yellowing skeleton rises finally, like a forest of bones, Djemila presents the symbol of that lesson of love and patience which alone can lead us to the beating heart of the world. There, amid a few trees, some dry grass, she defends herself with all her mountains and all her stones against vulgar admiration. (..) Towards evening we climb the slopes which lead to the village and, retracing our footsteps, we listen to explanations "Here is the pagan city, this quarter which rises out of the earth is that of the Christians. Later ... " Yes, it is true. Men and societies have followed each other here; conquerors have marked this countryside with their civilisation.
Albert Camus - The Wind at Djemila - 1936 - translated by Ellen Conroy Kennedy 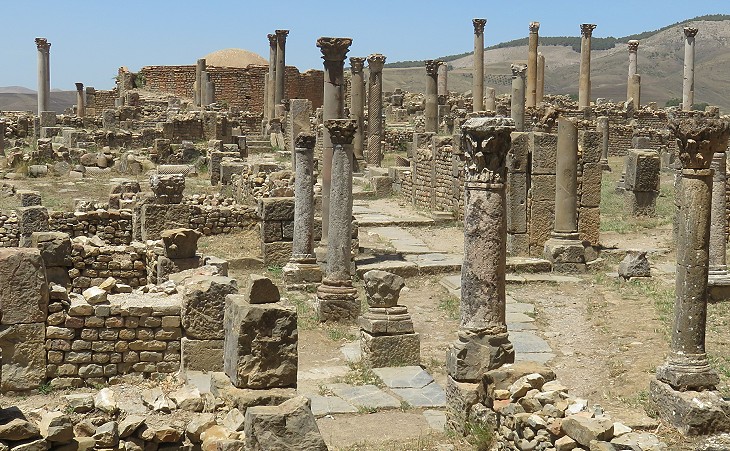 Entrance to the Christian Neighbourhood

The site has also been marked by Christianity in the form of several cult buildings: a cathedral, a church and its baptistery are considered among the biggest of the Paleochristian period.
From the 1982 UNESCO brief synthesis of the outstanding universal value of Djemila.
The existence of a Christian community at Cuicul is attested from the middle of the IIIrd century. In the first years of the Vth century the Christians built a cluster of episcopal edifices at the top of the hill. Two basilicas were placed next to each other. Nearby was a round baptistery, as well as a bishop's mansion and a complicated group of annexes. This complex of buildings is the first which is seen when entering the archaeological site. 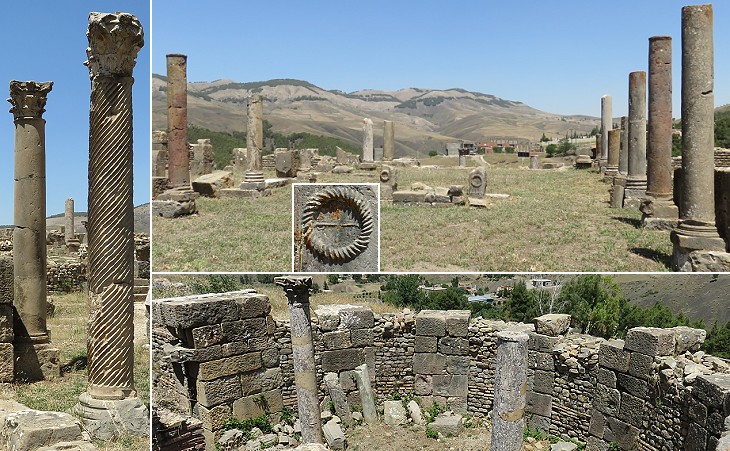 Basilica of Bishop Cresconius and its crypt

The unity of the Christians of Cuicul was marred by a rift which originated at Carthage during the persecutions ordered by Emperor Diocletian. Some deacons and priests were charged with having betrayed their faith during that period. In 311 the election of Cecilianus as Bishop of Carthage led to a reaction by a number of bishops and their followers who regarded him as a traitor. The appointment was confirmed by the Pope and this led to a split of the Christian community into two parties who were divided also on some theological matters. Those who did not accept the Pope's decision were known as Donatists, after one of their leaders. They had their own religious hierarchy, cathedrals (e.g. at Sufetula), properties, etc. In 411 Donatism was declared a heresy by Emperor Honorius who endorsed the outcome of a council held at Carthage. In this context Cresconius, Bishop of Cuicul, decided to build a very large church where all the Christians of the town could gather. 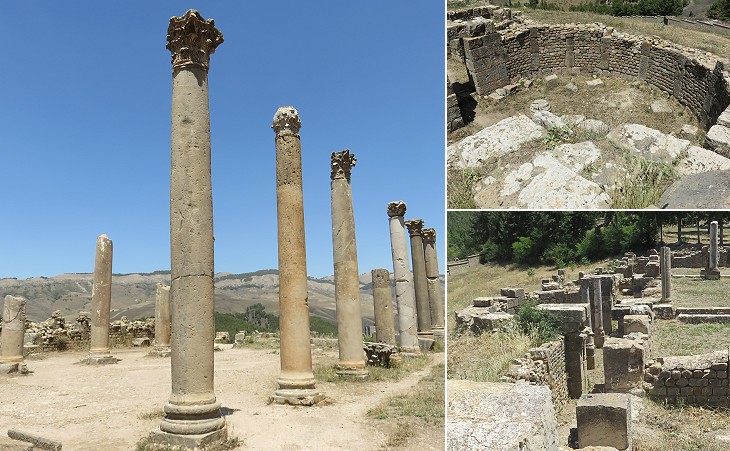 (left) Basilica adjoining that of Cresconius; (right-above) its crypt; (right-below) passage between the crypts of the two basilicas

The new basilica was built at the side of an existing one and the crypts of the two buildings were linked by a corridor. The crypts housed the tombs of local martyrs and bishops, which were visited by pilgrims. A long mosaic inscription in Latin verses, very similar to that found at the Basilica of Bishop Alexander in Tipasa, celebrated the construction of the basilica and the deeds of Bishop Cresconius.
Columns and building materials were taken from temples and other ancient buildings. The fact that the Christian neighbourhood was built at the top of the hill indicates that maybe the Old/Lower Town had already been abandoned for a more defensible location. 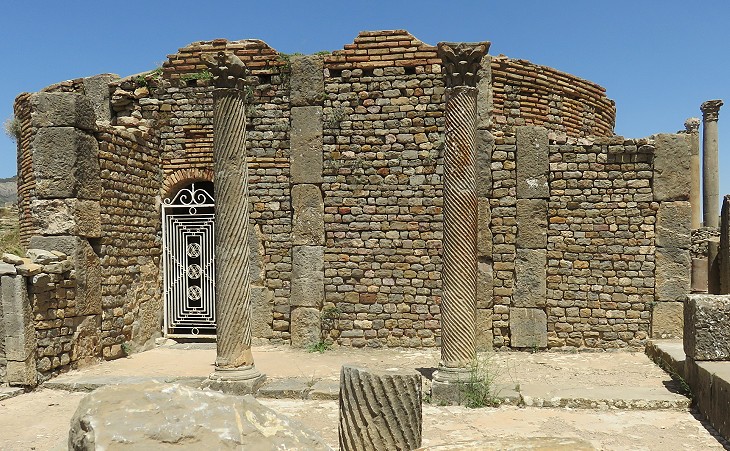 While the design of Christian basilicas followed a pattern which had already been developed for civilian buildings, that of the baptisteries had to meet the requirements of a new ceremony which had an extreme importance for the early Christians. In general these buildings had an octagonal structure which reflected that of S. Giovanni in Fonte or Battisterio Lateranense, which is thought to be the first monumental baptistery (the octagonal shape can be seen also in the two baptisteries of Ravenna, that of Neon and the Arian one). At Cuicul baptism was administered by immersion and the font was placed at the centre of the building and under a canopy as at Sufetula. 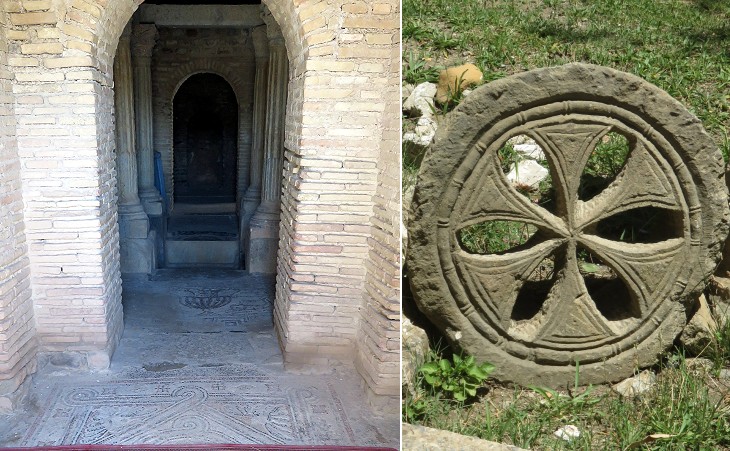 (left) Interior of the Baptistery; (right) stone decorated with a hexagonal cross, a sort of Chi-Rho, a monogram for Christ

St. Augustine, Bishop of nearby Hippo Regius, wrote a treatise to prove that the Donatist position on baptism was wrong. In particular he condemned the Donatist practice of baptizing a second time those who returned to the Church after having abandoned it. Baptism was reserved to catechumens, adults who had gone through a process of learning about the principles of the Christian religion. It was usually administered during collective ceremonies; at Cuicul the catechumens waited for their turn in niches along a circular corridor. 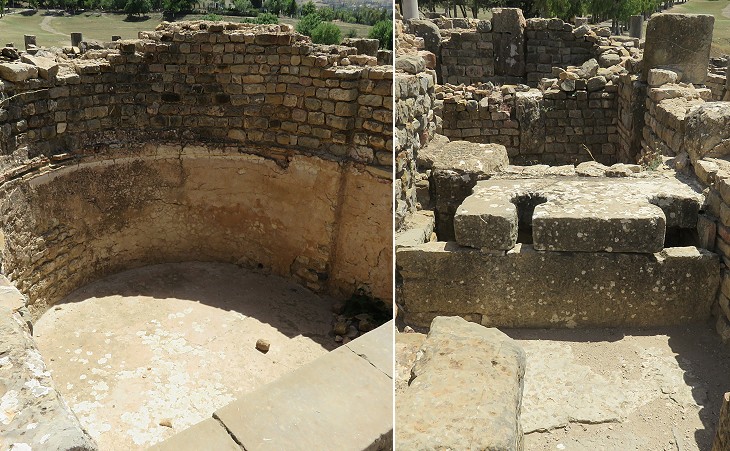 Small baths near the Baptistery: (left) a basin; (right) a latrine

Funerary inscriptions indicate that Cuicul was still populated after the Vandal invasion of 429. There is no evidence of a fortress, so perhaps it was already a small village when the Byzantines reconquered Numidia a century later and built many fortifications to strengthen their control of the country, as they did at Thignica, Musti and Thugga. A Bishop of Cuicul is listed among those who attended the Second Council of Constantinople in 553; it is the last historical record of the town. 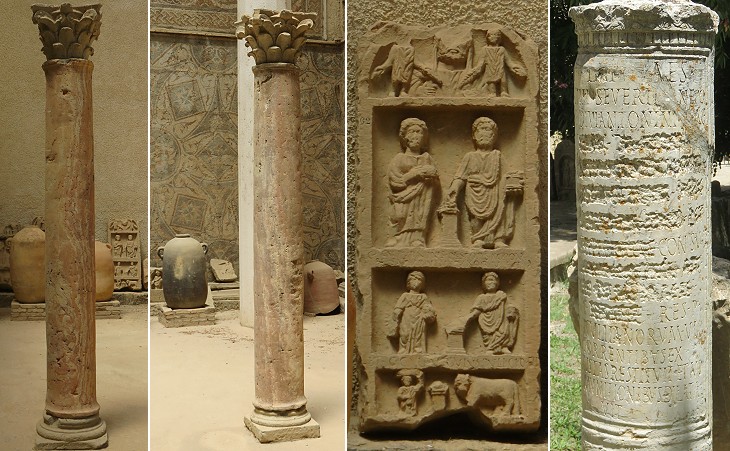 Exhibits outside the Museum of Djemila: (left to right) columns of Simitthus marble, a gravestone and an inscription in which references to Emperor Alexander Severus were erased

French archaeologists detached a series of large mosaics which they found in private houses and placed them in a museum, which however did not have enough room for all the other findings, including the gigantic heads of Emperor Septimius Severus and his wife Julia Domna. They are therefore placed in a courtyard outside the building and in the adjoining garden.
A column with an inscription marking the restoration and enlargement of roads which had been damaged by creeks shows that Cuicul authorities did not have much luck when they celebrated their achievements and dedicated them to the ruling emperor. In 211 they had to delete all references to Geta by order of Emperor Caracalla, his brother, who had him assassinated. In 235 they had to do the same after Emperor Alexander Severus was killed with his mother at Moguntiacum, in a mutiny of the legionaries on the Rhine border. Capelianus, governor of Numidia and commander of Legio III Augusta, supported Maximinus Thrax, the new emperor, and crushed a revolt against him. 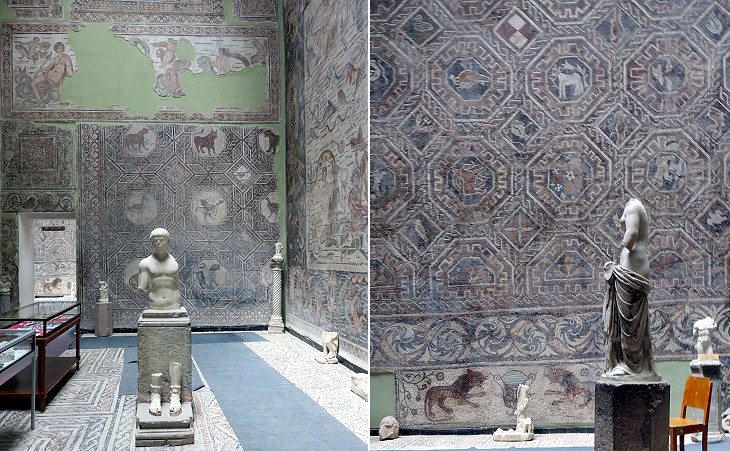 Halls of the Museum of Djemila

The halls have very high ceilings to allow the vertical placement of the mosaics, which entirely cover their walls. Overall they have a pleasant blueish tint. A small number of statues, including one of Venus, which were mainly found at the Great Baths are also on display. 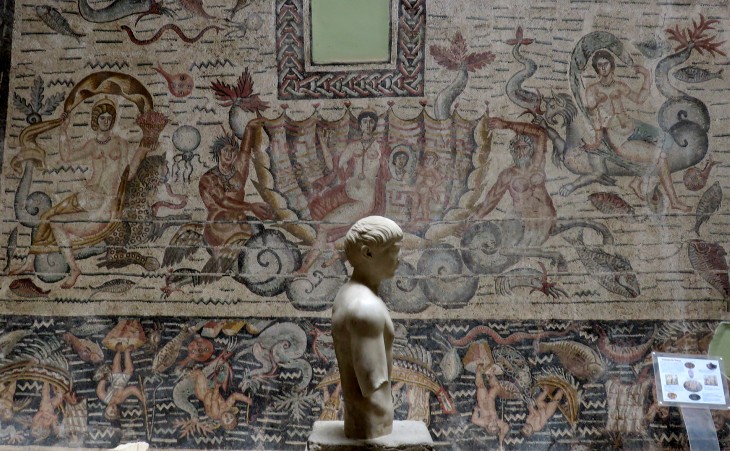 Museum of Djemila: mosaic depicting the Toilet of Venus or of Amphitrite, wife of Neptune, a detail of which is shown in the image used as background for this page

The mosaics of Cuicul are very similar to other works made in Roman Africa. They depict mythological events, hunting scenes and geometrical motifs which can be seen also in the collections of the Bardo Museum in Tunis and at that of Sousse. Many houses (of the Ass, of Europa, of Bacchus, of Amphitrite) were named by archaeologists after the subjects of the main mosaic which embellished them. 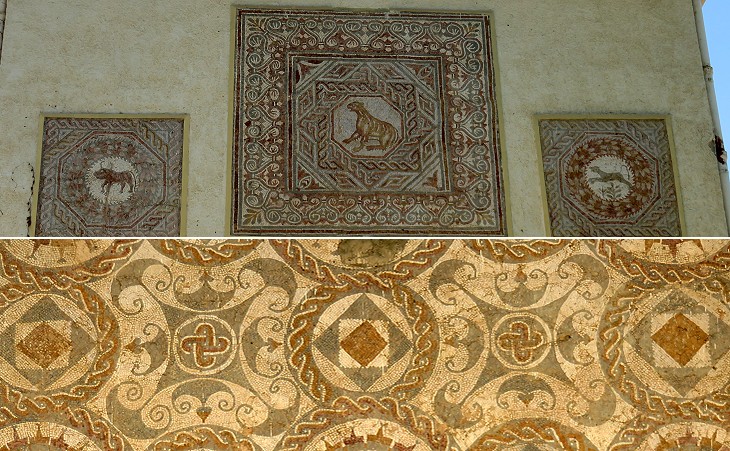 Museum of Djemila: mosaics on the external walls of the building

Return to the Old or to the Severian Town.