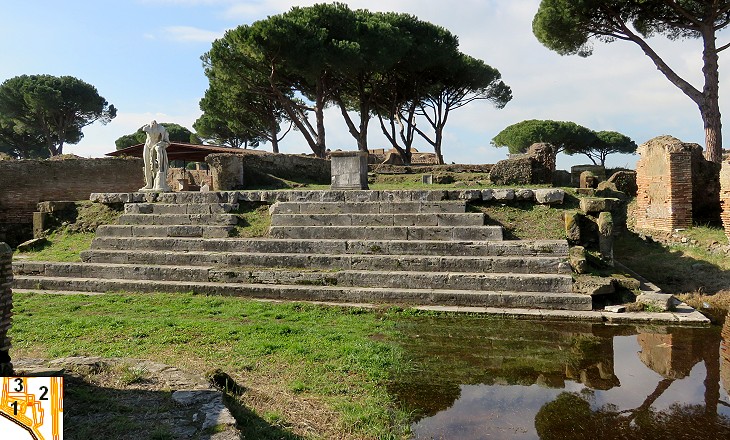 The Forum of Ostia housed three large temples, but it could hardly be regarded as a sacred area, because the temples were all aimed at celebrating the town's loyalty to Rome. Campo della Magna Mater, in the southern part of Ostia had other temples, but these were mainly related to beliefs of eastern origin. Temples to the traditional Roman and Greek gods were situated at the beginning of Via della Foce, a street leading to the river, which branched off Decumanus Maximus west of the Forum.
A large temple was built in this sacred area in ca 100 BC. It was dedicated to Hercules, to whom a temple was dedicated in Rome too, because of the hero/god's involvement in the early history of the City. When the temple was built the level of the ground was lower than it was in the following centuries. 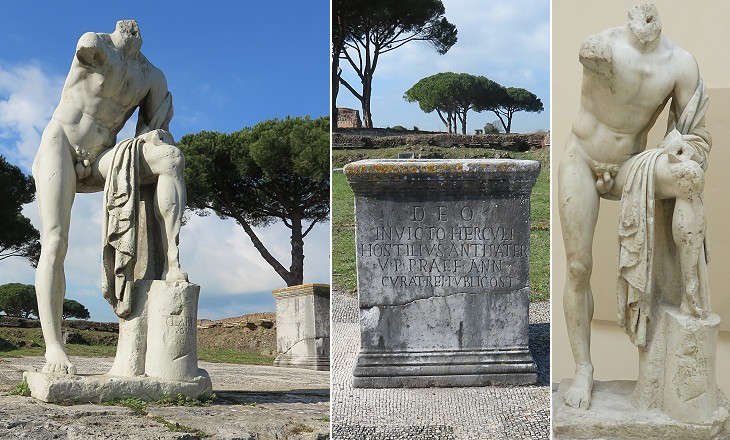 C. Cartilius Publicola was a duovir, one of two magistrates, who, in the same way as the consuls of Rome, was elected for one year to run the town. He supported Octavian and his tomb outside Porta Marina indicates he won a naval battle. In the statue erected to him at the Temple to Hercules, he was portrayed as a naked hero, but not as Hercules, because of the lack of the lion's skin which usually identifies the hero/god. Perhaps he was portrayed as Theseus, who was traditionally depicted naked, but with his cloak (see a mosaic at Paphos).
The temple was restored by Hostilius Antipater, praefectus annonae, i.e. magistrate in charge of the grain supply to Rome, at the time of co-emperor Maximian who assumed the title of Herculius. Another inscription indicates that a restoration occurred in 393-394, when the worship of the ancient gods had already been banned by Emperor Theodosius, but his decrees had not yet been implemented in the western part of the Empire. 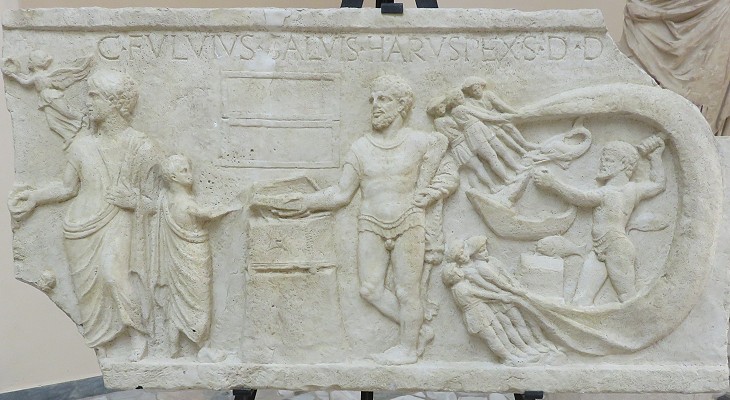 A Ist century BC relief found at the temple suggests that it might have been erected after a statue of Hercules was found by local fishermen in their net. The relief was paid for by a haruspex, a priest in charge of divination. These priests had a temple on the Palatine hill in Rome. The relief indicates that the Hercules worshipped at Ostia gave oracular responses by means of sortes, tablets with a word or a name or just letters which were drawn out of a group. This type of divination was practiced at the Sanctuary of Fortuna Primigenia in Praeneste. Nella buona e nella cattiva sorte is the Italian for "in good and bad times", because It. sorte means fate, destiny. The Temple to Hercules was built near an older temple. Archaeologists have been unable to identify to whom it was dedicated, so it has been named after an architectural element, the presence of four columns (Gr. tetra stylos) at the front. At that time marble was not widely available so the columns were made up of local volcanic stone as at the Republican Temples discovered at Largo Argentina in Rome. Marble was utilized only for the capitals. Evidence of small shrines and altars was found near the two main temples. A small building was perhaps used by the priests of one of the two temples as an office. Paintings in one of the rooms are dated IIIrd century AD and they depict fish and tridents inside architectural frames. These decorative subjects are very common in Roman paintings and they did not help in understanding the use of the building. 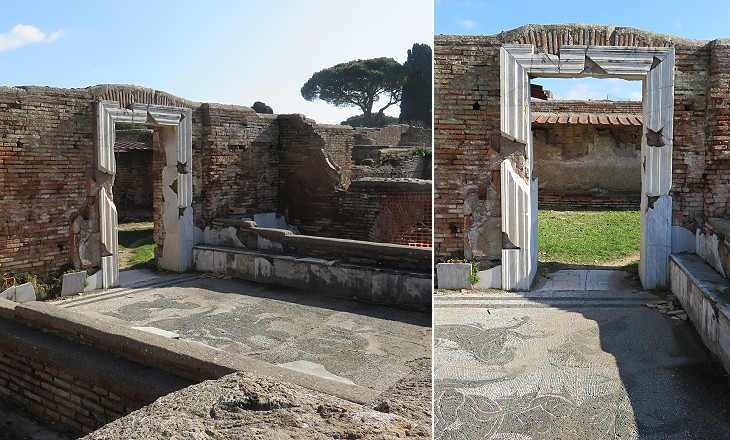 A small bath establishment was opened in the early IInd century AD near the sacred area. Its ground level is that of the podiums of the nearby temples, so we may assume that the steps leading to them had already disappeared underground. The layout of the baths indicates that they were the result of an adaptation of previous buildings, most likely warehouses which were no longer needed after the opening of the new harbour at Portus. 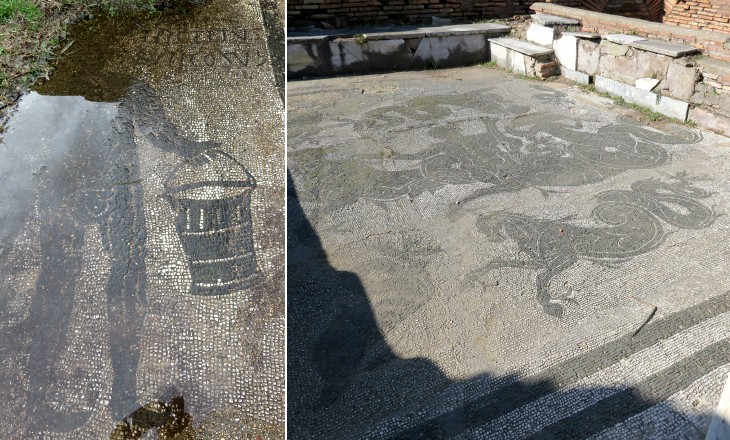 Marble decorations and floor mosaics indicate that the owners of the baths could rely on a substantial income. We do not know their names, but that of Epitectus Buticosus, apparently a superintendent of the baths who was portrayed with a bucket and a strigil, a tool for scraping oil. He most likely provided massages and he used the bucket to pour water on his customers. The image used as background for this page shows another detail of the calidarium floor mosaic, which, similar to those at Terme di Nettuno, depicted sea-monsters. 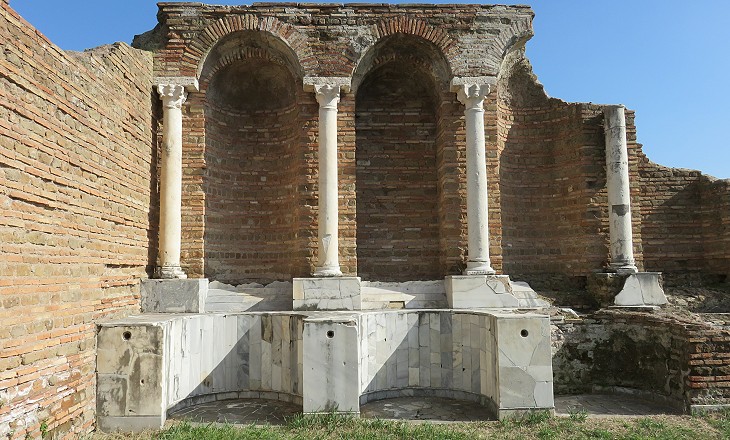 Archaeologists were puzzled to find a domus in a neighbourhood which did not appear to have a housing destination, unlike some southern areas of the town (e.g. along Semita dei Cippi). The house was built in the IVth century AD utilizing the walls of some earlier shops, but raising their floors. The complex of buildings covered in this page provides evidence of the gradual rise of the ground at Ostia. Unlike traditional Roman houses this domus did not have a proper courtyard, but a central room with a marble nymphaeum (in origin it had five niches). 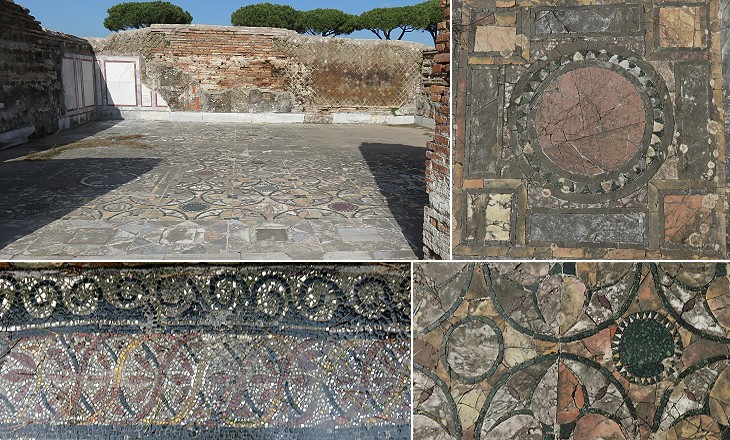 The use of opus sectile, i.e. elaborate marble inlays, became more frequent in the Late Empire, when a number of monuments/buildings were abandoned and fragments of their coloured marble decoration became available. The halls of this domus were decorated with very elegant motifs which can be regarded as forerunners of those developed by the Cosmati family in the XIIth century. A very fine example of house decorated with opus sectile was discovered in 1959 outside Porta Marina. Domus di Amore e Psiche: (left) "cubiculum" (bedroom) where the statue which gave the name to the building was found; (right) original at Museo di Ostia Antica (see a similar statue which was found near S. Balbina)

In origin the cubicula of the house were shops, so they are larger than traditional Roman bedrooms. These were often decorated with erotic paintings. The depiction of the love between Cupid and Psyche was a gentler way to touch on the subject of marital duties (it can be seen in a cubiculum at faraway Mamfis in the Negev Desert).
Almighty Jupiter, from his high throne, gave the following address:
"O deities, inscribed in the roll-call of the Muses, you all know it to be true that I raised this lad (Cupid) with my own hands. I've decided the impulses of his hot youth need curbing in some manner. We must take away the opportunity; restrain his childish indulgence with the bonds of matrimony. He's found a girl, he's taken her virginity. Let him have her, hold her, and in Psyche's arms indulge his passions forever."
Then he turned to Venus saying: "Now my daughter, don't be despondent. Don't fear for your lineage or status, because of his wedding a mortal. I'll make it a marriage of equals, legitimate, in accord with civil law." And he ordered Mercury to bring Psyche to heaven at once. Once there he handed her a cup of ambrosia, saying: "Drink this Psyche, and be immortal. Cupid will never renege on the bond, and the marriage will last forever."
Lucius Apuleius - The Golden Ass - Book VI - translation by A. S. Kline
You may wish to see a fine sarcophagus depicting Psyche's myth at Arles.