- Area near the Theatre 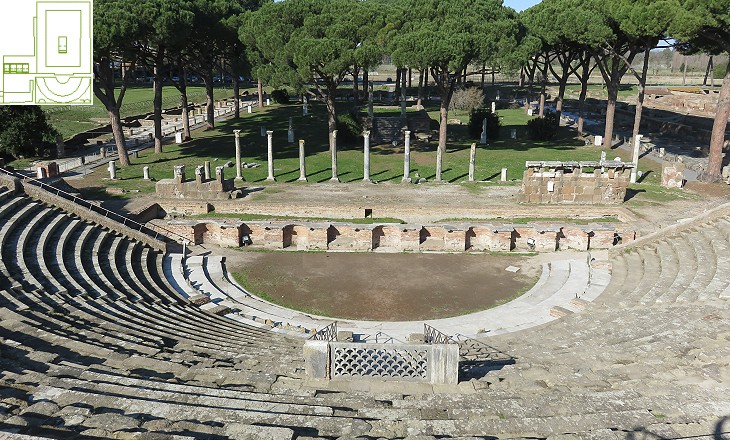 Interior of the theatre and Piazzale delle Corporazioni (see another view of the seating section in the image used as background for this page); (inset) plan of the monuments covered in this page

The access to the theatre was located along Decumanus Maximus, the main east-west street of Ostia (you may wish to see it in another page). Travellers of the late XVIIIth century were unable to notice the seating section of the theatre because it had completely disappeared beneath a thin layer of earth and weeds which had covered its collapsed structures. It has been partially reconstructed and in summer it is used for a short season of Latin plays, mainly comedies by Plautus and Terence. Modern audiences see beyond the stage the high pine trees of Piazzale delle Corporazioni, a wide rectangular square which was built by Marcus Vipsanius Agrippa, Augustus' son-in-law, at the same time as the theatre. 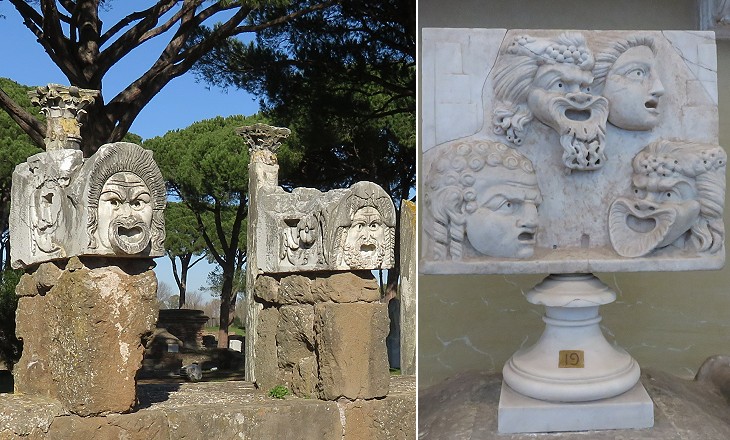 Actors in Greek and Latin plays always wore masks to make their characters more easily identifiable from a distance. Julius Pollux (IInd century AD), the author of a Greek dictionary, describes 44 masks, each used by a different character type. The "old slave" mask had a very large open mouth which hinted to the fact that he spoke a lot. These masks eventually became a "genre" of decorative sculptures and mosaics, especially those with a buffoonish aspect. The Romans enjoyed a good laugh and had no taboos about what subjects could be treated in a play. Homo sum, humani nihil a me alienum puto (I am human, and nothing of that which is human is alien to me) is a famous quotation by Terence. 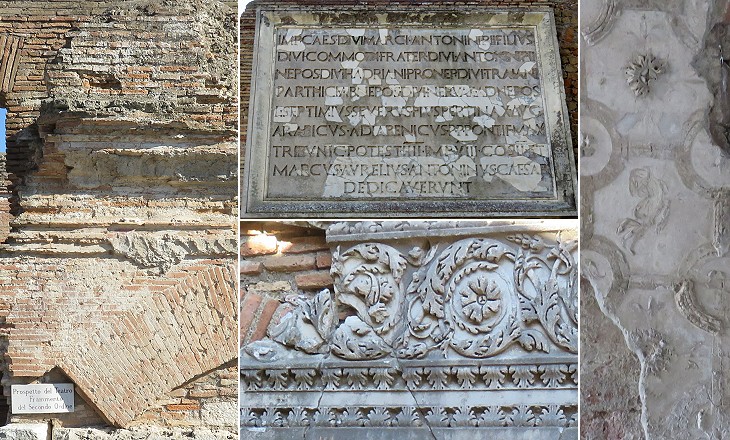 (left) Fallen section of the exterior of the theatre; (centre-above) reconstructed inscription celebrating Emperor Commodus; (centre-below) fragments of the decoration; (right) stucco on the ceiling of the main entrance

The theatre was enlarged at the end of the IInd century AD by Emperors Commodus and Septimius Severus. Archaeologists have found pipes leading to the orchestra, the semicircular space between the stage and the seating section. This could indicate that it was occasionally filled with water, most likely to add a choreographic effect to some ballet performances.
In the VIth century, during the Greek-Gothic War the theatre was turned into a small fortress and eventually it was abandoned. Its walls collapsed, but the mortar kept together the bricks, so that archaeologists were able to reconstruct the appearance of the building and the mouldings which decorated it. 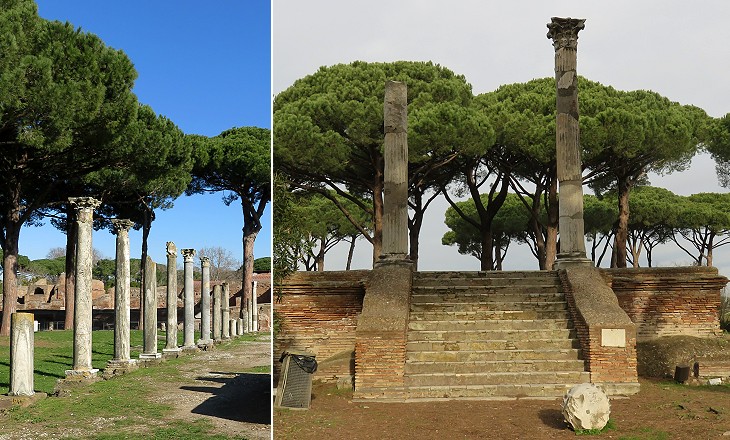 Piazzale delle Corporazioni:(left) row of columns which once stood on the highest level of the theatre; (right) temple at the centre of the square

A small temple was built at the time of Emperor Domitian at the centre of Piazzale delle Corporazioni. Archaeologists do not agree on the deity which was worshipped there; their hypotheses include Annona, Ceres, Vulcanus, Serapis and the deified emperors. 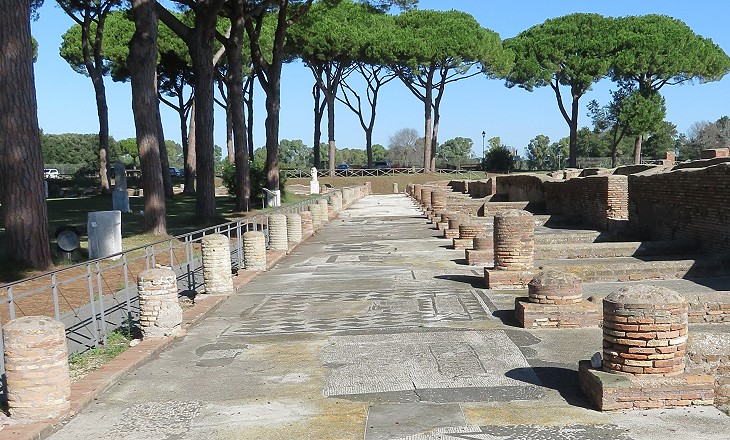 The square is named after the corporations/guilds which are indicated on its floor mosaics. These mosaics however are generally associated with the enlargement of the theatre, so archaeologists have struggled to understand what was the prior aspect and purpose of the square. The general opinion is that it was a strolling area for the theatre audiences. 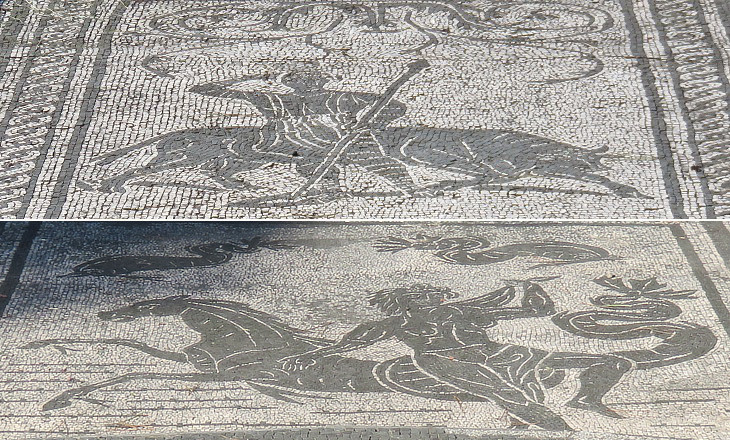 Piazzale delle Corporazioni: mosaics of the time of Emperor Claudius, when the square was yet to be used by the Corporations

Modifications to the square designed at the time of Agrippa were made during the reigns of Emperors Claudius and Hadrian. It was decorated with finely executed floor mosaics, but their subjects did not provide archaeologists with clues about the use of the square and they did not include inscriptions. The portico was most likely surrounded by wooden stalls. 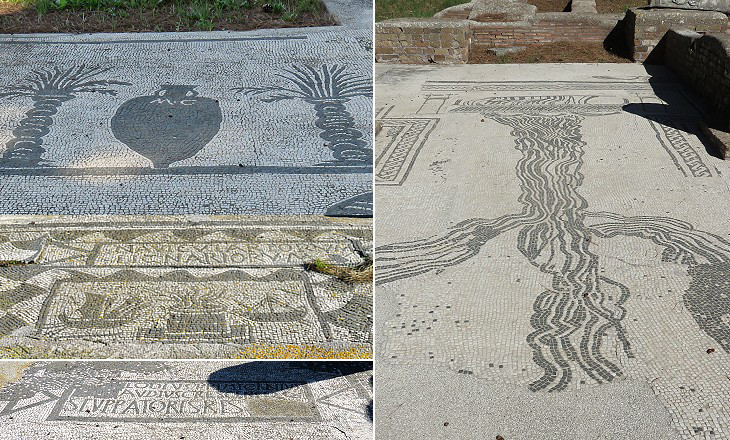 In the early IIIrd century the stalls were turned into small shops by masonry walls. Each of them had a roughly made mosaic which had references to businesses associated with trade activities, chiefly with transportation by sea. You may wish to see the mosaic of the statio of Sabratha in today's Libya or that of Sullectum in Tunisia. 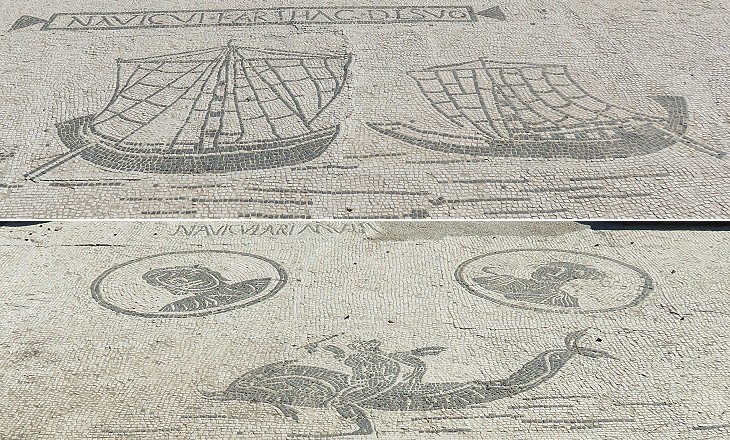 The mosaics tell us how the Roman logistics system worked: Ostia was the terminal of trade routes from Africa, Sicily, Sardinia, Spain and France. These routes were operated by shipping companies represented in Ostia by their agents who worked at stationes (commercial offices) in Piazzale delle Corporazioni.
What a size that ship was! 180 feet long, the man said, and something over a quarter of that in width; and from deck to keel, the maximum depth, through the hold, 44 feet. And then the height of the mast, with its huge yard; and what a forestay it takes to hold it! And the lofty stern with its gradual curve, and its gilded beak, balanced at the other end by the long rising sweep of the prow, and the figures of her name-goddess, Isis, on either side. As to the other ornamental details, the paintings and the scarlet topsail, I was more struck by the anchors, and the capstans and windlasses, and the stern cabins.
Description of an Egyptian cargo ship by Lucian of Samosata, a IInd century AD Greek writer in Navigium - Translation by H. W. Fowler.
You may wish to see a vivid polychrome floor mosaic depicting a Roman merchant ship leaving Alexandria which was found in 1877 near Palazzo Rospigliosi. 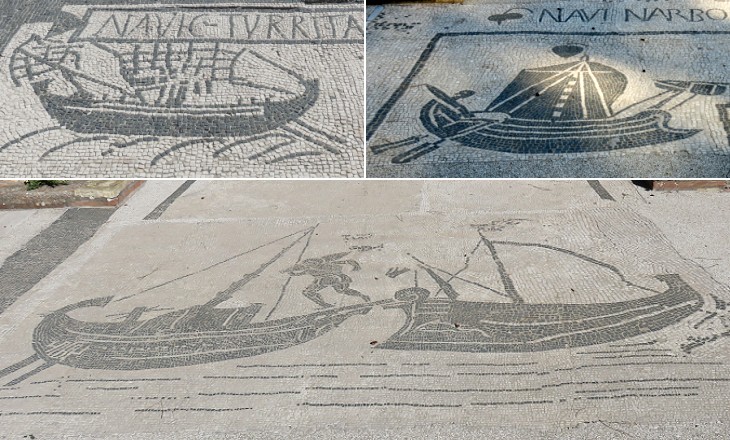 "Stationes" at Piazzale Corporazioni: (above-left): traders of Turris in Sardinia; (above-right) traders of Narbonne in southern France; (below) goods being moved from one ship to another

The mosaics depict ships in a rather sketchy way, yet they provide information about some of their technical features. Naves onerariae, the vessels which carried cereals, oil and other goods (e.g. garum, a fish based sauce) from Africa and Spain were not able to sail up the river in order to reach Rome. Their load was moved to naves caudicariae, ships with a lesser draft which were towed by oxen to the docks of Rome.
With regard to the navigation of the river from Ostia to Rome in ancient times, we must again make a distinction between war and trading vessels. War vessels could easily overcome the force of the current with their powerfully-manned oars; trading vessels had to be towed up-stream by oxen and buffaloes, for which purpose tow-paths on each bank of the river were opened and carefully paved. Navigation was suspended at nightfall, when every ship was obliged to moor at the nearest station. There must have been at least thirty of these stations between Rome and the sea.
Rodolfo Lanciani - Ancient Rome in the Light of Recent Discoveries - 1888 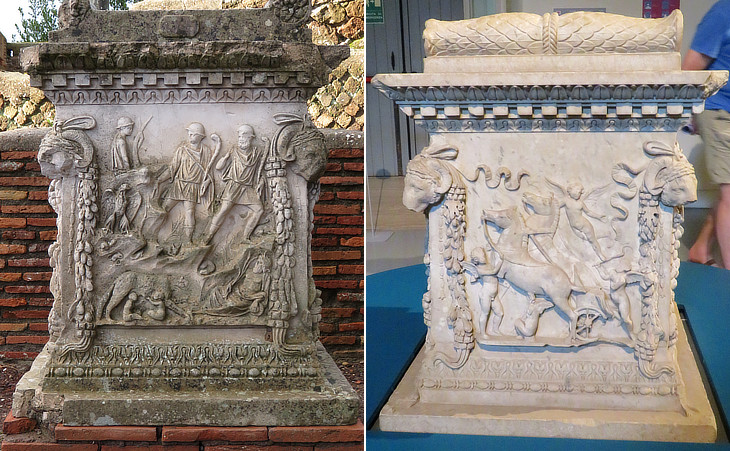 In 1880 a fine marble altar was found in a small room situated at the south-western end of Piazzale delle Corporazioni. A similar, but empty, room was identified at the south-eastern end. The placing of the altar was approved by the decuriones, the highest magistrates of Ostia, in the IInd century AD. The reliefs suggest that at least initially the altar was dedicated to Mars, who according to tradition was the father of Romulus and Remus. Eventually it was dedicated to Silvanus, Roman god of woods and flocks. 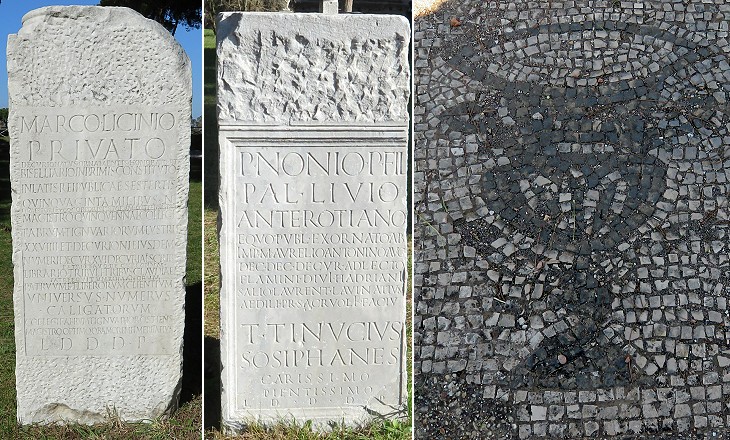 Statues to citizens who had done something for the community or held important positions were erected in the large area inside the porticoes. The statues are lost but their lengthy inscriptions shed light on interesting aspects of Roman society:
a) Marcus Licinius Privatus was born a slave, became a freedman and eventually the chairman of a corporation. In 200-204 AD he held the office of quinquennalis, an important magistrate. He donated 50,000 sesterces to the city and he was awarded the honorary title of bisellarius, which gave him a place of honour (a folding seat) in the theatre (you may wish to see two tombs of bisellarii at Pompeii).
b) P. Nonius Livius Antierotianus was a benefactor who was knighted by Emperor Marcus Aurelius. At his public funeral twenty pounds of incense were burnt.
caupona is a Latin word meaning: 1. an inn along a road where a traveller could find food and lodgings; 2. a shop where wine and ready dressed meals were sold. Archaeologists have used the word in its second meaning for most of the 39 wine bars they have identified at Ostia. The caupona of Fortunato was very well situated near the theatre and Decumanus Maximus. Its floor mosaic invited customers to have a drink. 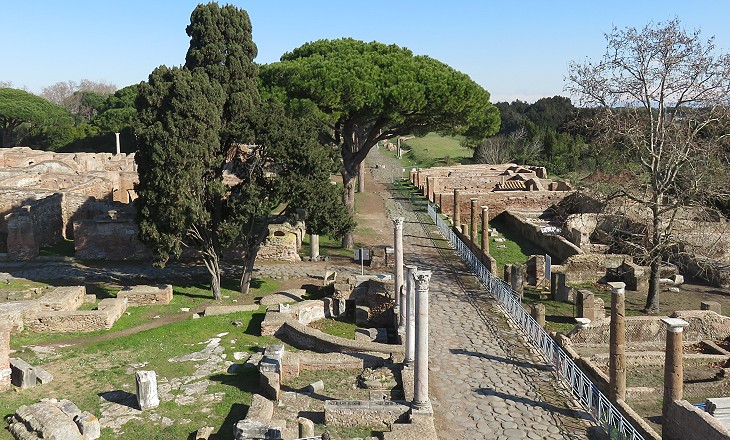 Two fountains decorated with columns and most likely with statues stood at the sides of the theatre along Decumanus Maximus. They were built at the time of Emperor Domitian and redesigned when the theatre was enlarged. Ostia was supplied with water by an aqueduct which crossed all the town. It had a length of nearly ten miles from the spring to the town, but its arches have almost entirely disappeared. Site of a Christian chapel; (inset) Sarcophagus of Cyriacus

The main evidence of Christian Ostia, with the exception of a basilica in the western part of the town, is a small chapel which was built above the eastern nymphaeum in the VIth century. It was made up of materials taken from other buildings. A IIIrd century sarcophagus depicting Orpheus was moved there from a necropolis. Its lid bears an inscription dated Vth century saying: Cyriacus sleeps in peace. According to tradition he was a Bishop of Ostia who was executed near the theatre. The existence of the chapel was eventually forgotten until the site was excavated in 1910. 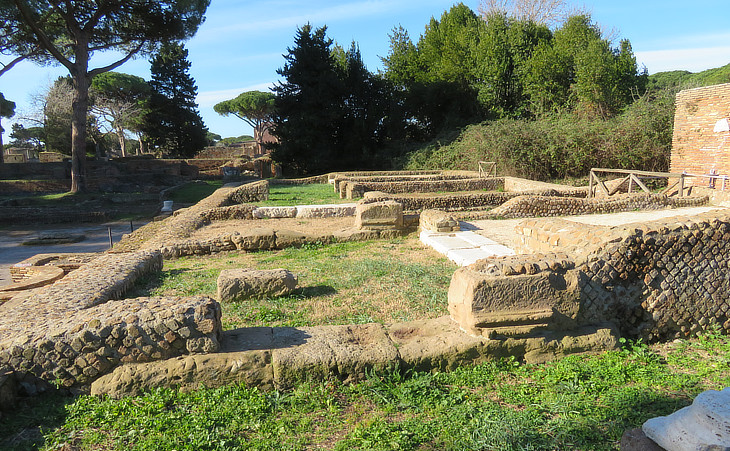 The foundations of four small temples built on the same high podium along Decumanus Maximus and close to the theatre are among the oldest remains found at Ostia as they are dated IInd century BC. 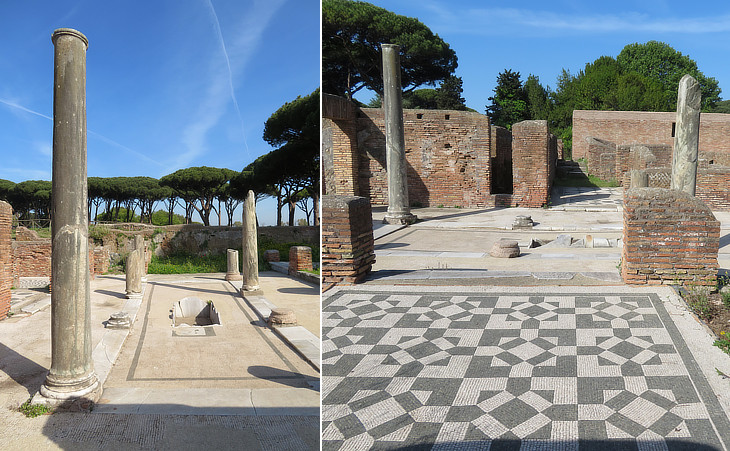 A IInd century AD house was built adjacent to the temples. Stamps on its lead water pipes indicate the owner as L. Apuleius Marcellus. In recent years it has been suggested this Apuleius to be Apuleius of Madauros, a Latin writer best known for The Golden Ass, a novel describing the adventures of a man who experiments with magic and is accidentally turned into an ass. He lived in ca 124-170 AD. 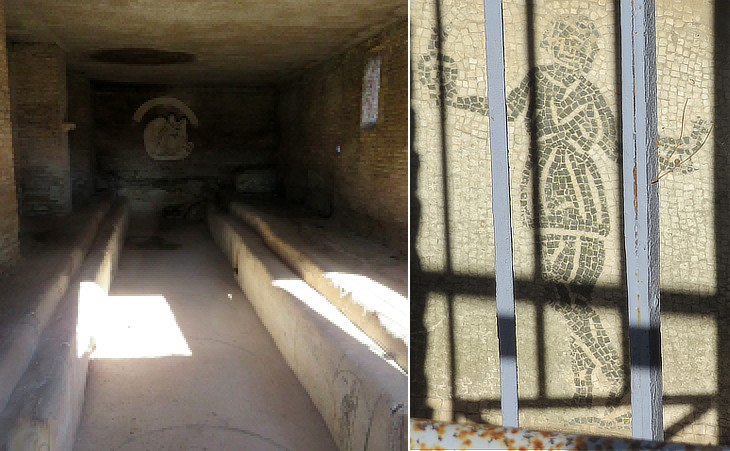 (left) Mithraeum of the Seven Spheres; (right) Cautes; he raises a small torch and in his other hand is a cock, a reference to the morning

Archaeologists found a mithraeum behind the four temples. It was easily accessed from Apuleius' House and it could have been built by its landlord. Seven was a key number in the cult of Mithra because it corresponded to the grades of initiation and to the "planets" (Sun, Moon, Mercury, Venus, Mars, Jupiter and Saturn). The latter and the zodiacal signs are depicted in now barely visible mosaics on the benches of the mithraeum, in addition to Cautes and Cautopates, torchbearers associated with the Sun and the Moon. Some fifteen mithraea have been found at Ostia, the largest concentration of such buildings in the world.