- Area between Via della Foce and Cardo degli Aurighi 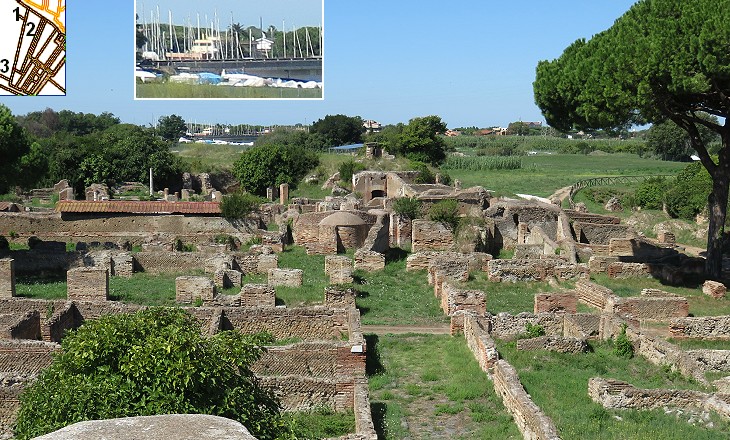 An embankment protects this part of the archaeological area from being flooded by the River Tiber, which during the centuries eroded the ground upon which harbour facilities stood. They were situated very near the mouth (It. foce) of the river and they were used by ships carrying commodities from the provinces. Emperors Claudius and Trajan built a new sea harbour at Portus and that at Ostia lost importance. The area covered in this page was mainly built after the opening of Portus and, notwithstanding its proximity to the river, it did not house facilities related to harbour activities. 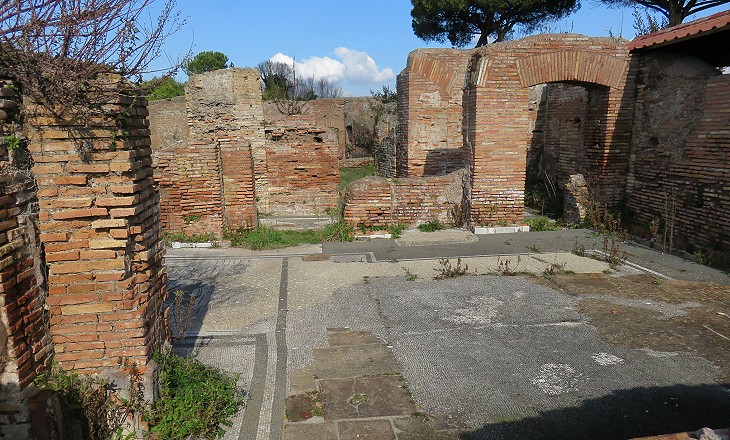 Terme della Trinacria: one of the heated rooms

These baths were situated just a few yards away from Terme dei Sette Sapienti, a lavishly decorated establishment. They were both built at the time of Emperor Hadrian, but they catered for a different clientele. Terme della Trinacria had a direct entrance from Via della Foce and other entrances on a side street which ended at Cardo degli Aurighi. They clearly were baths open to the public, whereas Terme dei Sette Sapienti were most likely reserved to the residents of two adjoining large buildings. 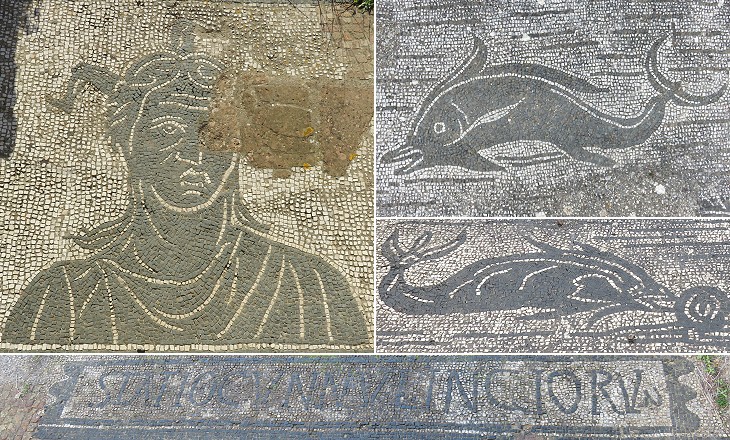 Terme della Trinacria: floor mosaics: (above-left) "Trinacria" in a corridor; (above-right) marine subjects in one of the halls; (below) inscription in one of the heated rooms

The baths were named after a floor mosaic depicting Trinacria, i.e. the symbol of Sicily, the Roman province which together with Africa (today's Tunisia), Egypt and Spain was the main supplier of grain to Rome. Perhaps other floor mosaics depicted these provinces (as at other baths of Ostia).
The inscription STATIO CVNNVLINGIORVM has puzzled archaeologists. Some of them who were keen on finding evidence of Roman debauchery said that male prostitutes offered their services to wealthy matrons in these baths (without the ladies having to travel to Jamaica). Other archaeologists suggested the inscription was just a vulgar joke. 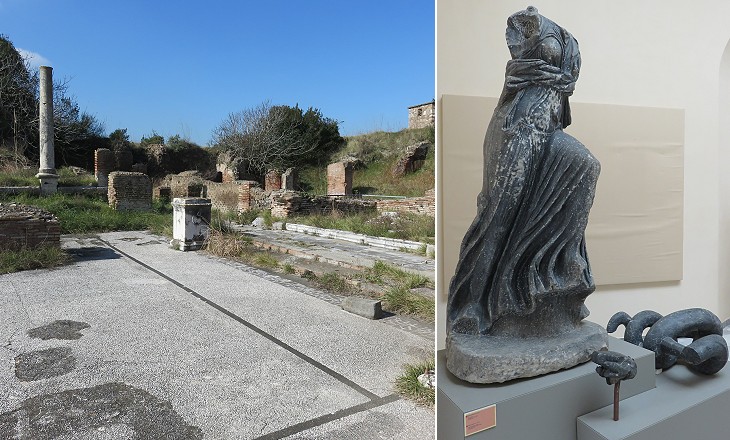 Emperor Hadrian travelled extensively through the provinces of the Empire. He was fascinated by Egypt and he wanted his villa at Tivoli to remind him of what he had seen there. Antinous, his favourite, was portrayed in Egyptian attire in many statues which decorated the villa. A temple was dedicated to Serapis, a god introduced in Egypt by the Ptolemaic Pharaohs in the IIIrd century BC, who had features of both Zeus and Osiris. During the reign of Hadrian a temple to Serapis was built opposite Terme della Trinacria. Serapis however was not the Egyptian deity most worshipped at Ostia, because the inhabitants of the town by far preferred Isis, patron of seamen, and they often named their ships after her. 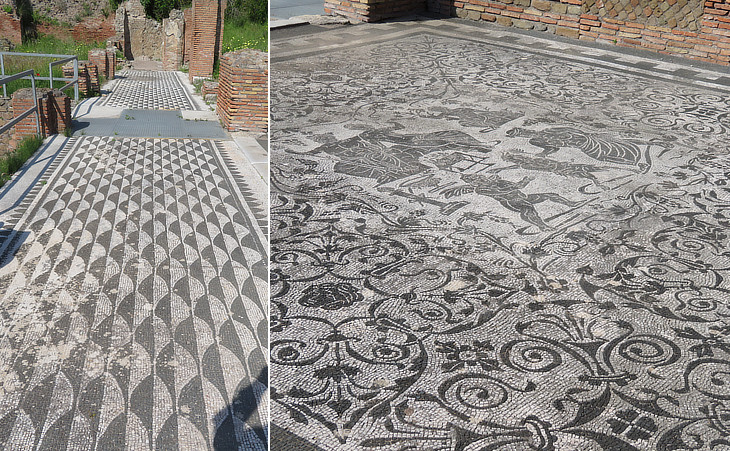 An elegantly decorated building adjoining the Serapeum is believed to have been the residence of its priests. Its layout includes halls which maybe were used for meetings and formal banquets. Their floor mosaics are among the finest ones found at Ostia. 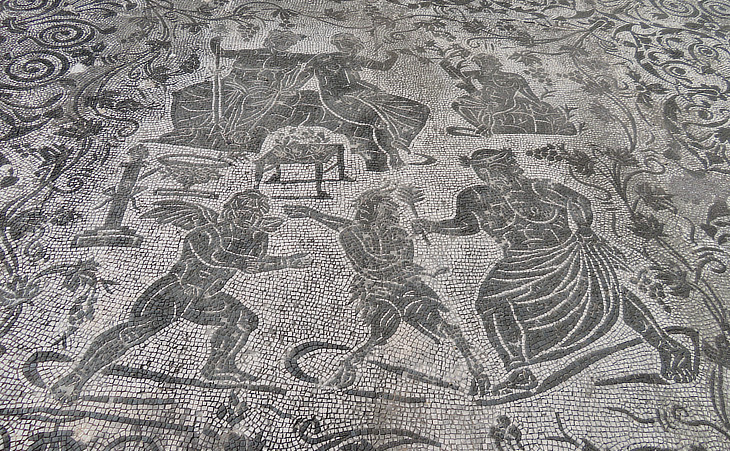 The central panel of this floor mosaic was unrelated to the worship of Serapis. It depicts a subject which during the Renaissance became the symbol of a life free from religious worries. 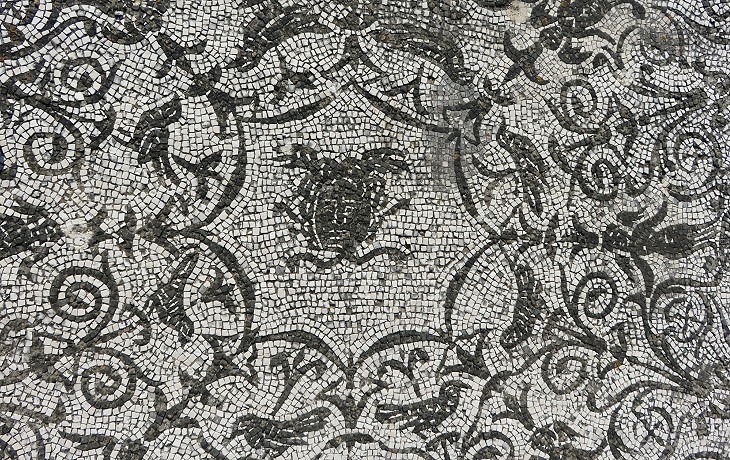 Domus di Bacco e Arianna: floor mosaic of the dining room. A detail can be seen in the image used as background for this page

The floor mosaic of a dining room adjoining the meeting hall does not have a central panel, but just a small head of Medusa, which had the objective of turning evil spirits away. We know that the building was utilised until perhaps the early IVth century, when the passage to the Serapeum was closed. Because of the excellent state of the floor mosaics one might assume that they were preserved by the collapse of the ceiling, similar to what occurred at the opus sectile mosaics found at Porta Marina. 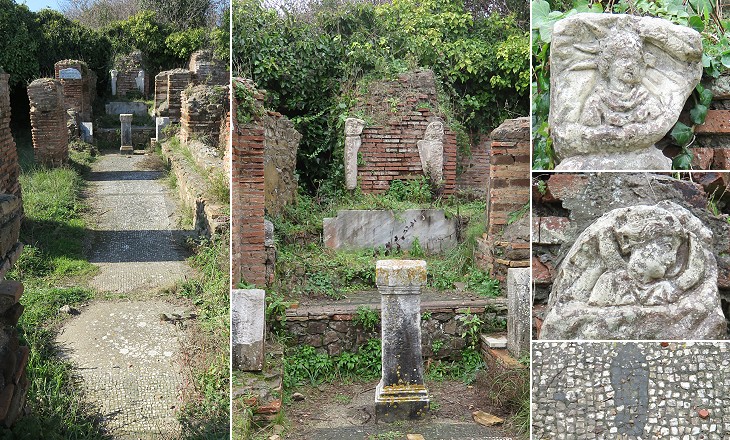 The Serapeum and Domus di Bacco e Arianna are indicative of the religious/cultural tendencies of the IInd century AD, overall a period of economic development and peace. The following century was a very turbulent one and it was marked by a gradual abandonment of the traditional religion in favour of new beliefs originating in the eastern provinces of the Empire and in neighbouring Persia. In no other towns of the Roman Empire as many mithraea have been found as at Ostia. Their number is to some extent explained by their small size; only 30 to 50 worshippers could gather in each of them. They were all decorated with reliefs, mosaics or paintings related to the cult of Mithra, which had an astronomical content. It was a religion reserved to initiates and the foot sole at the entrance marked the beginning of the initiation process. Foot soles and footprints have been found at other archaeological sites including the gigantic ones at Ain Dara, a Hittite town in Syria.