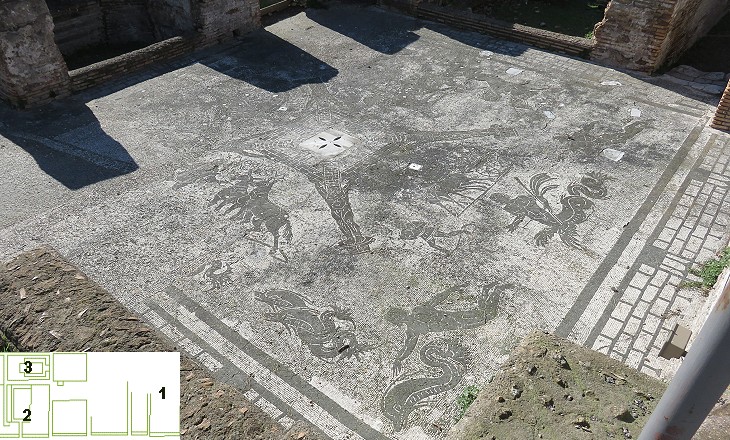 Most of the goods unloaded at Ostia and in particular olive oil and cereals were shipped to the river harbour of Rome via boats with a small draft. Other goods were shipped by land. In addition passengers arriving from/leaving for the provinces left/reached Ostia by land. Via Ostiense may not have seen the traffic jams which often occur today, but certainly it was a busy road. The guild of the Cisiarii (from Lat. cisium, gig, a two-wheeled carriage), had a sort of terminal near Porta Romana where Via Ostiense entered the town; it included small baths where passengers could relax. 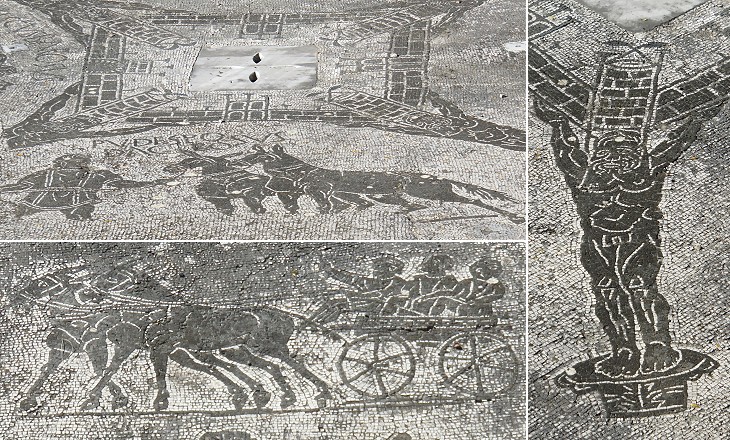 Terme dei Cisiarii: details of the "frigidarium" floor mosaics: (left-above) central section showing a walled town and the donkeys Pudes (Modest) and Podagrosus (Gouty); (left-below) a gig with the coachmen and two passengers (they seem to be in a hurry!); (right) an atlas supporting one of the towers

The baths were built at the time of Emperor Hadrian on the site of warehouses which were no longer needed after the construction of the new harbour of Portus.
When Sextus Roscius was slain, the first person who brings the news to Ameria (today's Amelia), is a certain Mallius Glaucia (..); and he brings the news to the house, not of the son, but of Titus Capito, his enemy, and though he had been slain about the first hour of the night, this messenger arrives at Ameria by the first dawn of day. In ten hours of the night he travelled fifty-six miles in a gig.
Marcus Tullius Cicero - For Sextus Roscius of Ameria - Translation by C. D. Yonge
Based on this passage by Cicero we may estimate the travelling time between Ostia and Rome to have been in the region of three hours.

Museo Nazionale Romano from Museo Kircheriano: small sarcophagus which was found in 1723 in the Roman countryside; it depicts: (right to left) a couple with their infant baby travelling on a gig; two children (or the same child at different ages) playing under a tree; the same couple with a child and a flying winged figure. The dead was most likely the child of the couple and the left scene symbolized the travel to the afterlife

You may wish to see a funerary relief depicting a similar light carriage at Trier in Germany. 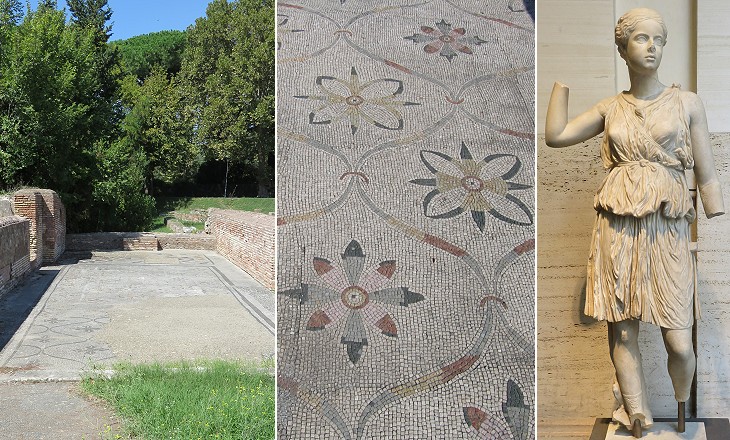 Gig coachmen were subject to penalties for unsafe driving. Maybe passengers on their way to boarding a gig, said a last prayer at a small shrine on Decumanus Maximus, near Terme dei Cisiarii. Its floor mosaics are dated 150 AD and were executed in a much finer way than those of the baths. The deity which was worshipped has not been identified. A mithraeum (almost entirely lost) was built next to the shrine in the IIIrd century AD; the two small buildings were connected.
A number of broken statues have been found near Terme dei Cisiarii. They did not belong to the decorations of the baths, but they were about to be calcined in a lime kiln which was installed in the area. 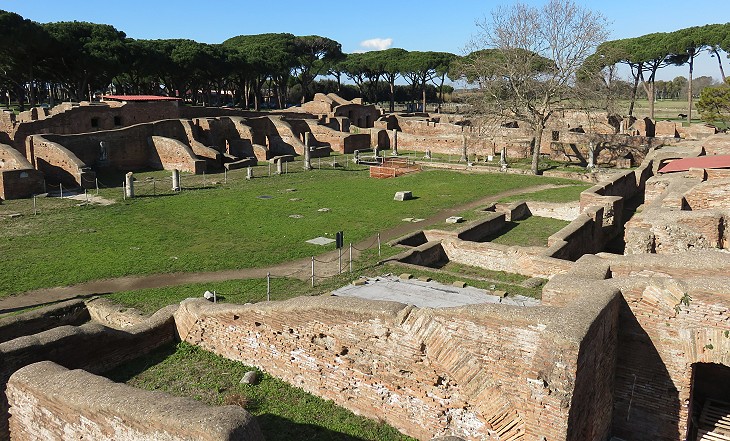 Terme di Nettuno: view of the palaestra, a large courtyard used for exercising, seen from a terrace above the main hall

These large baths were enlarged and redesigned at the initiative of Emperors Hadrian and Antoninus Pius. They were inaugurated in 138 or 139 and according to an inscription now at Musei Vaticani, they were lavishly decorated with marbles. Hadrian financed the construction by a donation of two million sesterces (brass coins) equivalent to 20,000 gold coins. It was not unusual for emperors to state the money they poured on public facilities; Emperor Augustus had done so in Index Rerum Gestarum, his spiritual testament in which he listed his accomplishments and made reference to the money he spent on donations and public works. The complex was adjoined by a large palaestra, surrounded on three sides by a portico with columns. 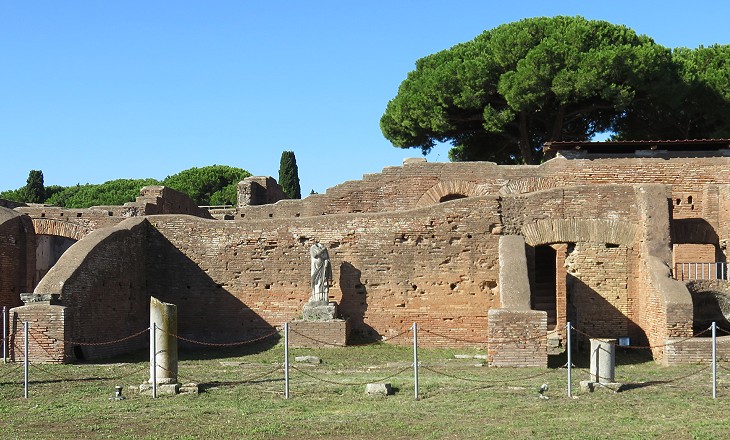 Terme di Nettuno: west side of the palaestra and Via della Fontana behind it

A larger room on the west side of the palaestra housed a statue which archaeologists believe to portray Vibia Sabina, Hadrian's wife, with symbols of Ceres, Roman goddess of crops and abundance. In his last years Hadrian was not very keen on erecting statues to his estranged wife, so the decision could have been made by Antoninus Pius, whose wife Annia Faustina was a relative of Vibia Sabina.
The room with the statue could be accessed only from the palaestra, whereas other adjoining rooms were parts of houses with independent accesses from Via della Fontana, the street behind the palaestra. The layout of the baths is unusual because the calidaria are not situated on the south-western side of the complex in order to benefit from greater exposition to the sun (as recommended by Vitruvius in De Architectura - Book VI). They were placed instead in the northern side of the complex and are pretty small. The same can be said for the tepidaria (tepid rooms) and the frigidarium.
The largest room (which was not used for bathing) gives the name to the complex owing to its floor mosaic depicting Neptune riding his chariot. 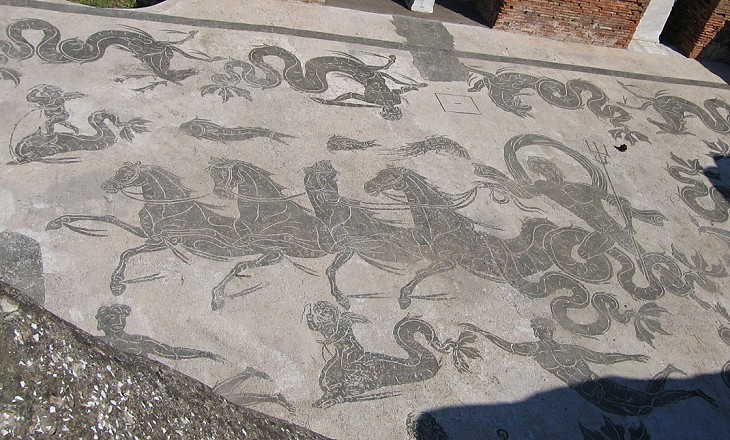 According to archaeologists it appears that all the people who went to the baths passed through this hall. Some of them might have walked on the mosaics with the wooden clogs which they had used in the hot rooms (these clogs were popular in Turkish hammams too), so, prior to admiring the beauty of this floor mosaic, one is impressed by how soundly it was made from a durability point of view. The secret lies on the stability of the layers of mortar beneath the mosaic. The choice of black and white rather than coloured mosaics made small repairs simpler.

The making of an elaborate mosaic required teamwork. Calcis coctor was in charge of preparing the mortar, the quality of which was key to ensure the duration of the mosaic. Pavimentarius prepared the floor by laying the lower layers of the mosaic. Tessellarius made the simpler parts of the mosaic such as geometric frames. Pictor musivarius executed the most elaborate sections based on drawings made by Pictor imaginarius. These last two activities were often combined. 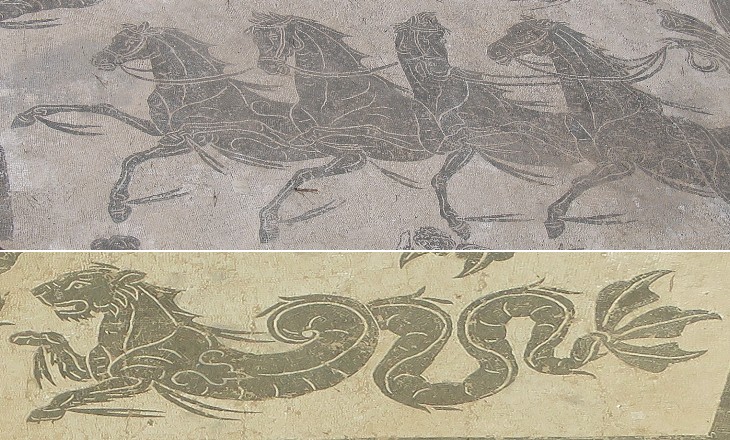 What grabs the attention in these mosaics is that they are more decorative than naturalistic. Those who made them disregarded classic artistic canons and profited from the fact that sea-monsters could be depicted with as many circumvolutions as were necessary to cover a wide space in a decorative manner. 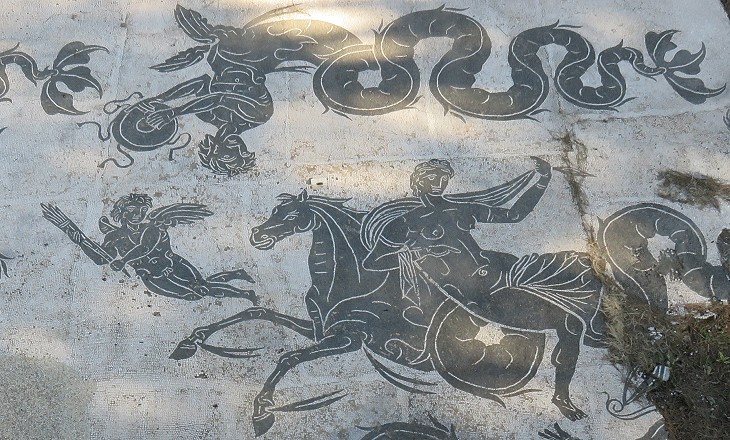 Neptune and Amphitrite as well as Oceanus and Thetys with their court of sea-monsters are perhaps the most common subject of Roman mosaics. You may wish to see some other examples of floor mosaics portraying them: Neptune riding his chariot at the museums of Bardo in Tunis and at that of Sousse; Amphitrite at Bulla Regia, a Roman town in Tunisia; Oceanus and Thetys in a mosaic from Zeugma in eastern Turkey. 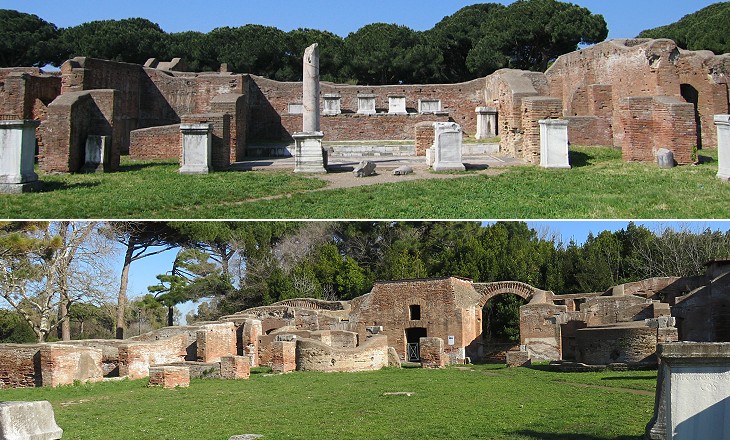 The Romans had an elaborate system for managing their towns: they had laws which are regarded as an early approach to town planning, they had magistrates who supervised the orderly activity of markets and the storage of supplies, and they had firefighters/policemen in charge of handling emergencies and enforcing the law.
The firefighters/policemen were called Vigiles (those who stay awake) and It. Vigile is used for the Metropolitan Police (Vigile Urbano) and for firefighters (Vigile del Fuoco). In 1868 evidence of a vigiles barracks was found in Trastevere. 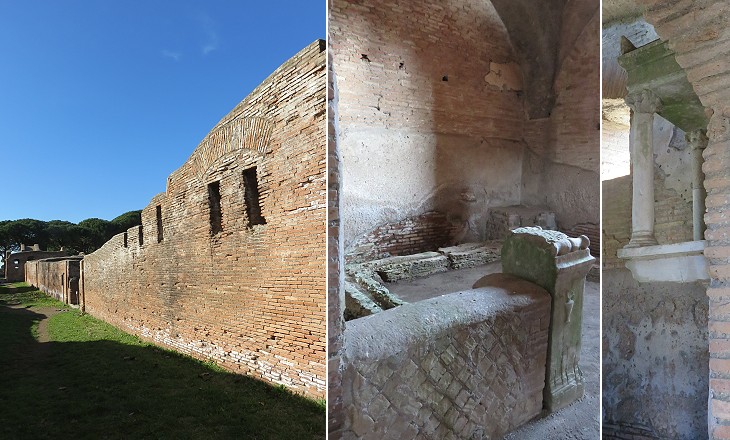 Caserma dei Vigili: (left) southern wall; (centre/right) latrine with an altar and a hanging shrine, both dedicated to Fortuna, Roman goddess of Luck

The barracks of the Vigiles were situated very near the River Tiber banks and they were built at the time of Emperor Hadrian.
In view of the fact that the quantity of shipping moored at night along the banks must have been enormous, and that the crews of those days were certainly not better nor quieter than those of our own, we need not wonder that special police precautions had to be taken to insure order, and to protect neighbouring property from the nocturnal inroads of marauding sailors. Vigiles, that is to say, a special body of constables and firemen, were stationed from point to point along the banks; but the expense of this night watch, and of keeping their stations in due repair, had to be met by the owners of the property facing the river, who were subject accordingly to an extra tax, called "onus vigiliarium".
Rodolfo Lanciani - Ancient Rome in the Light of Recent Discoveries - 1888 Caserma dei Vigili: (left) inscription where the name of the emperor was erased; (right) floor mosaic depicting the sacrifice of a bull in the hall preceding the emperor's shrine (a detail is used as background for this page)

One side of the courtyard was dedicated to the emperors; it is likely that a sort of flag-hoisting ceremony took place in front of it. Statues of the emperors stood on bases bearing dedicatory inscriptions. A long inscription where the name of the emperor was erased was usually believed to have been dedicated to Emperor Geta who was killed by his brother Caracalla and whose memory was damned. A deeper analysis of the text indicates that the erased name was that of Diadumenian, a young son of Macrinus, the head of Caracalla's praetorian guard who ruled the Empire for a short time after having killed his master. 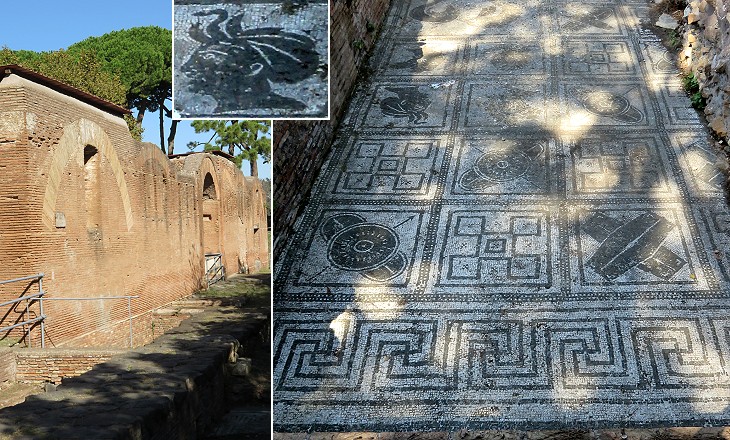 (left) Eastern side of Caserma dei Vigili; (right) floor mosaic with symbols of provinces; (inset) symbol of the Province of Africa (today's Tunisia)

Some 300 vigiles were stationed at Ostia and on the eastern side of the barracks archaeologists have found evidence of three small caupona, shops where wine and ready dressed meals were sold. The opening of these shops most likely occurred in the IIIrd century.
By digging below the level of the barracks archaeologists found a floor mosaic which most likely belonged to small baths which were superseded by Terme di Nettuno. They were decorated with military symbols, geometric patterns and other subjects including four heads representing the provinces of Spain, Africa, Sicily and Egypt, the main trading partners of Ostia (you may wish to see the "shipping agencies" of these provinces at Piazzale delle Corporazioni). 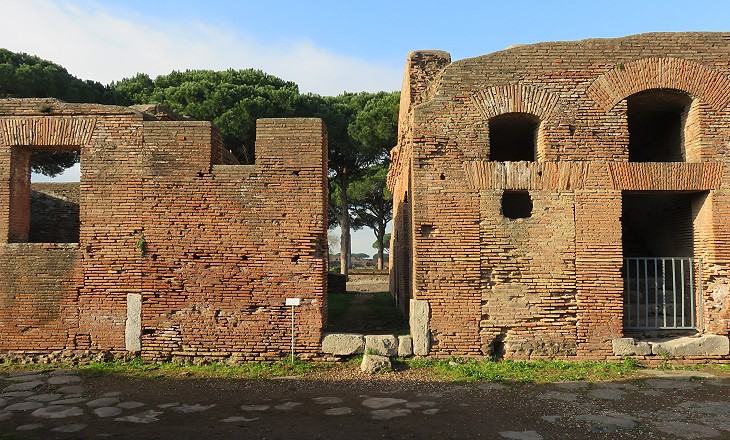 Emperor Hadrian regarded himself as an excellent architect. He might as well have claimed to be a town planner, because at Ostia, in addition to promoting the construction of public buildings, he took care of private housing. Rows of identical or highly similar houses sharing side walls were built to the west of Terme di Nettuno and Caserma dei Vigili. Stairs led to independent apartments on the upper storey. 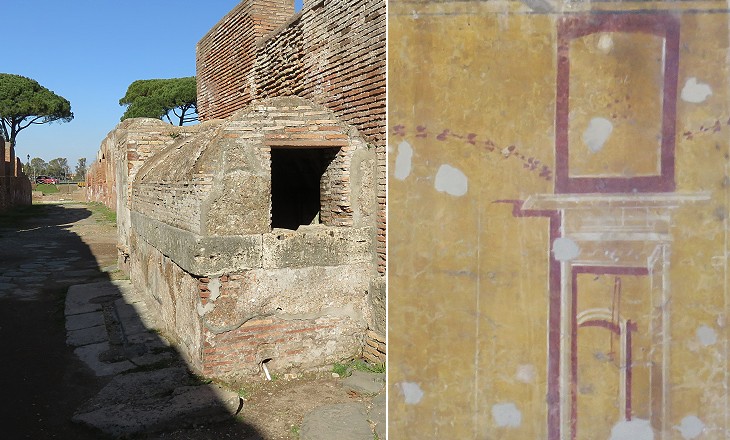 Set against the north-west corner of the baths is a public basin where the inhabitants of the houses could draw water with buckets through a square hole in the south side. Near the fountain there is a travertine gutter with round depressions for buckets. The rooms of the houses were embellished with frescoes depicting architectural motifs in white and red against a yellow background, a pattern which was very popular in Ostia and Rome (see a beautiful example of such decoration that was found near Villa dei Sette Bassi).