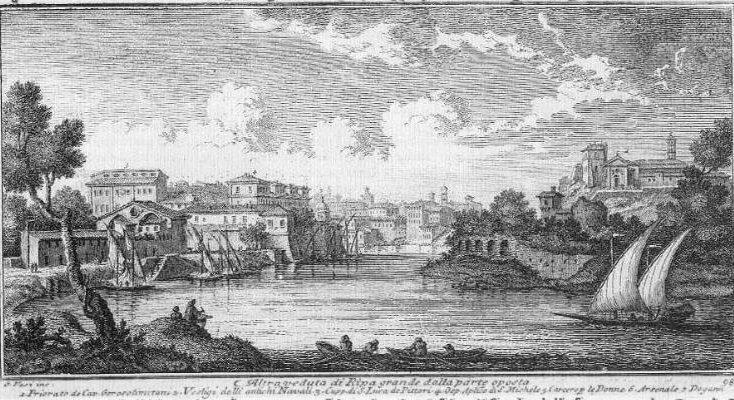 In 1756 Giuseppe Vasi showed Ripa Grande from the north (plate 97) and from the south; in this second plate one of his main objectives was S. Maria del Priorato, the church of the Roman Priory of the Knights of Malta on the south-western edge of the Aventine Hill (on the right side of the plate). At the foot of the hill Vasi showed the ruins of Antichi Navali by this meaning the ancient Roman river harbour. In 1771 Vasi showed this part of Rome in greater detail. On the left side of the plate Vasi depicted Arsenale Pontificio, a shipyard built by Pope Clement XI outside the walls of Rome.
The view is taken from the green dot in the small 1748 map here below. In the description below the plate Vasi made reference to: 1) Priorato dei Cavalieri Gerosolimitani (Knights of Jerusalem/Malta); 2) Ruins of the Roman harbour; 3) Dome of SS. Luca e Martina; 4) Ospizio di S. Michele; 5) Carcere Femminile (Women's Jail); 6) Arsenale Pontificio; 7) Custom-house. The small map does not show 3). 1), 3), 4) and 5) are covered in other pages. 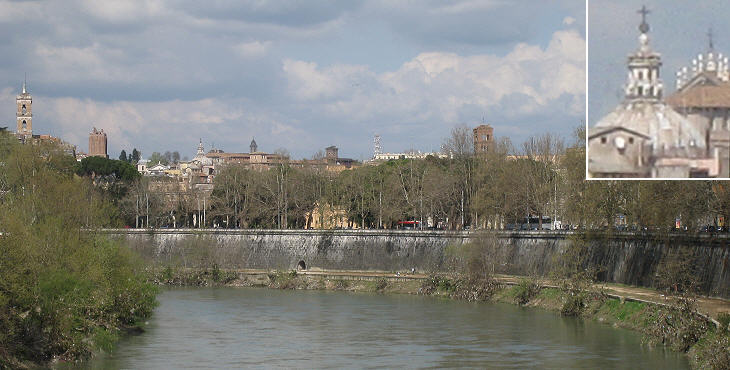 The beach from which Vasi took his view does not exist any longer, because of the changes made to the river bed in the 1880s to facilitate the flow of the water. They led to the disappearance of small mills, salt-works and other establishments at the foot of the Aventine. Vasi enlarged the dimensions of the buildings of Rome at the centre of the etching. In order to see the dome of SS. Luca e Martina it is necessary to move forward and stand on a modern bridge. 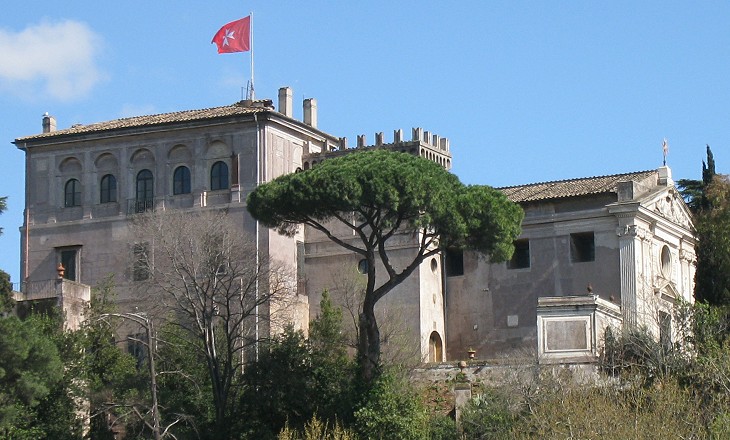 The buildings belonging to the Knights of Malta have not changed much, but the façade of S. Maria del Priorato was redesigned in 1765 by Giovanni Battista Piranesi. 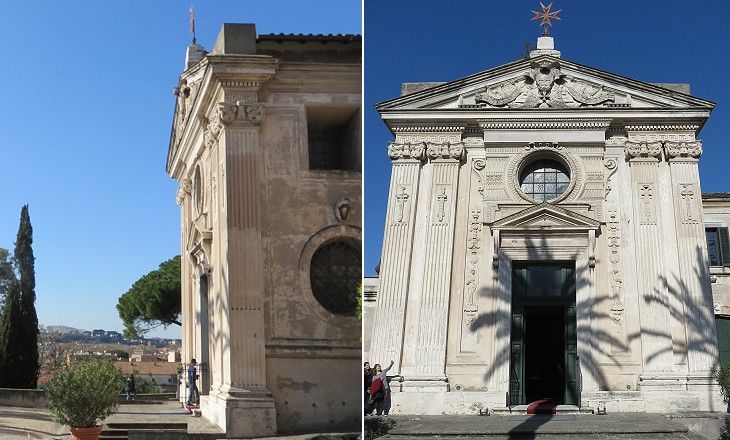 (left) The commanding position of the church; (right) façade

Giovanni Battista Piranesi (1720-1788) is best known for his etchings showing the ancient monuments of Rome (and for some unscrupulous restorations of ancient vases/tables); he was commissioned the redesign of the church and of the adjoining square by Giovanni Battista Rezzonico, brother of Pope Clement XIII and Grand Prior of the Roman branch of the Order. The Roman Priory had another church at Foro di Augusto. 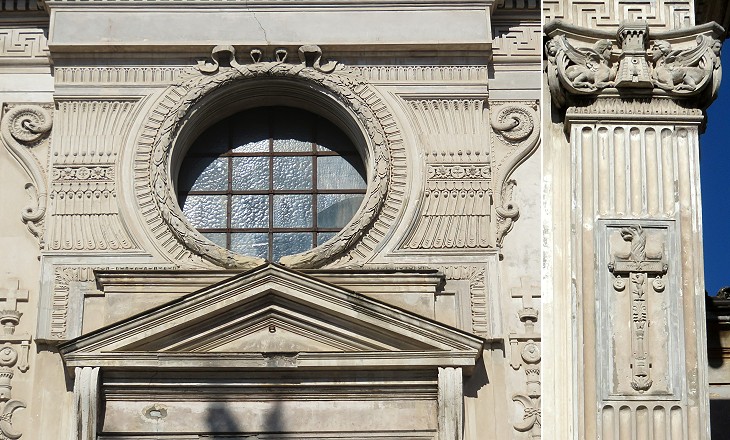 Details of the façade

S. Maria del Priorato is the only architectural work by Piranesi. He overloaded the church façade with a rather bizarre decoration. While anticipating some features of Neoclassicism, its richness shows traces of the Roman Baroque tradition. The tower on the capital is a tribute to the coat of arms of the Rezzonico. A detail of the façade is shown in the image used as background for this page. 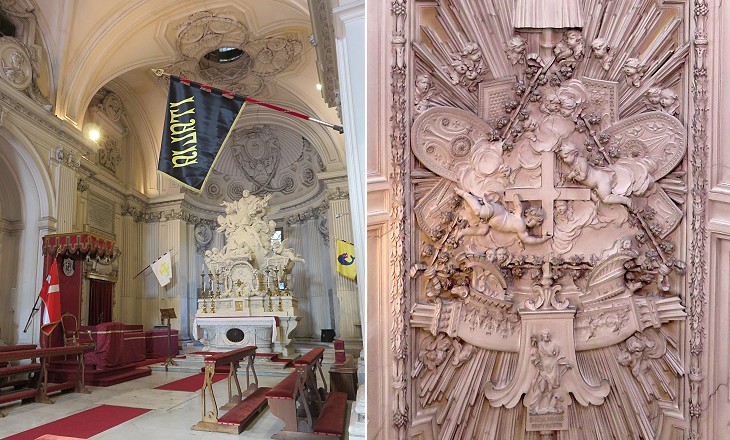 (left) Interior with the flags of the eight historical "Langues" which grouped the Knights by land of origin; (right) stucco ceiling with ancient military emblems

The interior of the church was entirely decorated with stucco, similar to what Piranesi did in the redesign of the square in front of the Priory premises. Its total whiteness brings to mind the interior of S. Ivo alla Sapienza, but Piranesi did not have the same talent as Francesco Borromini. 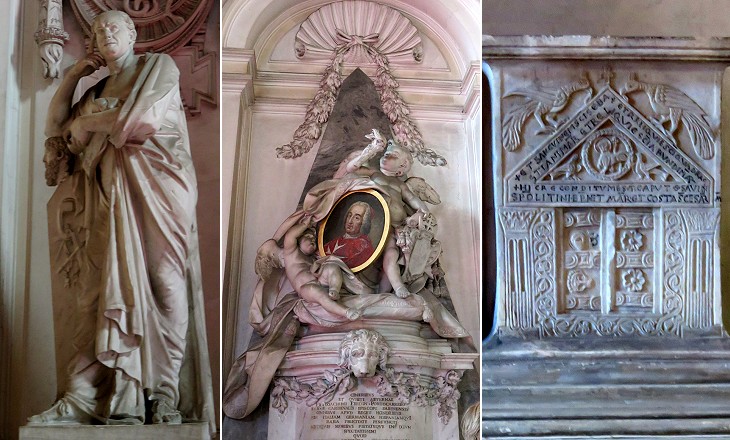 (left) Monument to Giovanni Battista Piranesi by Giuseppe Angelini (1780). Piranesi was depicted as an ancient Roman senator; the monument was highly praised by Antonio Canova, the greatest Italian neoclassical sculptor; (centre) Monument to Cardinal Joaquín Fernández de Portocarrero (d. 1760) by Luigi Salimei. The Cardinal joined the Order in 1716 and eventually became the admiral of the fleet. In 1730 he entered the ecclesiastical career. His monument followed a traditional pattern; (right) medieval relief/altar of unknown origin and awkward dating

In 1798 Grand Master Ferdinand von Hompesch surrended Malta to Napoleon. Eventually in 1834 the Order established its headquarters in Rome where, in addition to the Priory premises, it owned a palace in Via Condotti. Some Grand Masters (the heads of the Order) are buried in the church; you may wish to see a page on the 2008 funeral of Grand Master Andrew Willoughby Ninian Bertie. 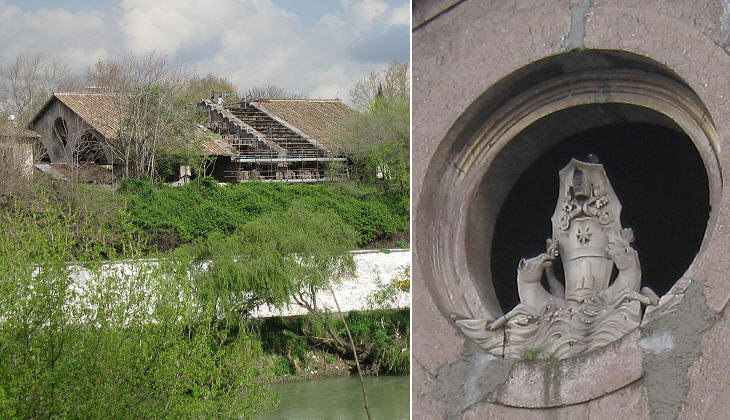 (left) Arsenale Pontificio seen from the left bank of the river; (right) a "Rule the Waves" coat of arms of Pope Clement XI

Pope Clement XI tried to facilitate the arrival and storage of supplies in Rome. He built Porto di Ripetta, a river harbour for receiving commodities from Sabina and Umbria, he enlarged the granaries at Piazza di Termini and he built a shipyard at Ripa Grande. Its main building is characterized by the use of pointed arches, a very unusual feature in Rome. Arsenale Pontificio seen from Via Portuense leading to Porta Portese which is visible at the end of the road; (inset) coat of arms of Pope Pius IX

The shipyard was restored by Pope Pius IX in 1853; a rather strange decision because at that time transportation was already based on railways and steamers.
The main building was used as a warehouse by a company selling building materials until ca 2010. In 2015 a project to turn the main building and its ancillary facilities into a centre for the experimentation of new forms of art was endorsed by the Italian Department for Culture. At the foot of the Aventine an arch of the horrea (the warehouses of the ancient Roman harbour where commodities were stored) was called Arco di S. Lazzaro, after a (lost) nearby small church. Other remains of the horrea e.g. those of Porticus Aemilia can be seen in Testaccio, a modern neighbourhood south of Arco di S. Lazzaro. 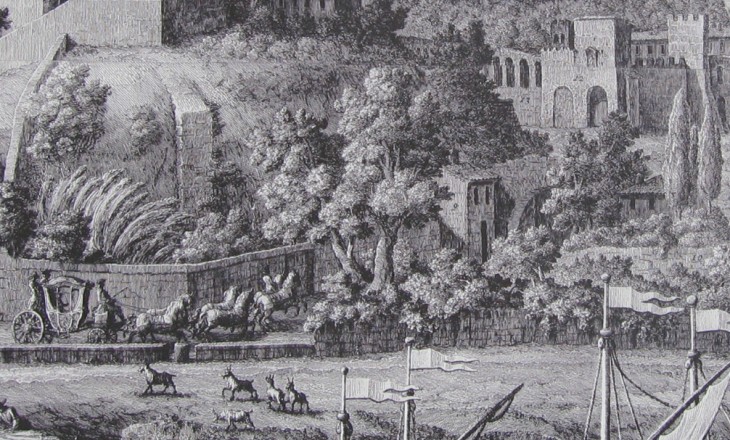 Detail of Vasi's 1771 view of the Aventine

In 1593 in the Place called la Casarina near the Hill Testaceus were found certain yellow Columns which being brought up the Tiber had been landed there. There are also Marble Stones of several colours, just begun to Be hew'd which have been long since dug up here, but being full of Stains that defec'd the Superficies, and an extraordinary hard Crust over them, they have been left there. On the Bank of the Tiber there were Walls which look'd as if they had been of Store-houses and Magazines, and there is a sort of Inlet or Bay, making a Harbour on the Tiber.
Flaminius Vacca's 1594 account of discoveries of antiquities which took place in his lifetime, as quoted in "The Travels of the Learned Father Montfaucon from Paris thro' Italy - 1712"
The area between Arco di S. Lazzaro and the river was called Marmorata (of the marbles) because it was used for unloading marbles and stones and Via Marmorata was the street leading from Arco di S. Lazzaro to Porta S. Paolo. It was a narrow street which passed through the arch. 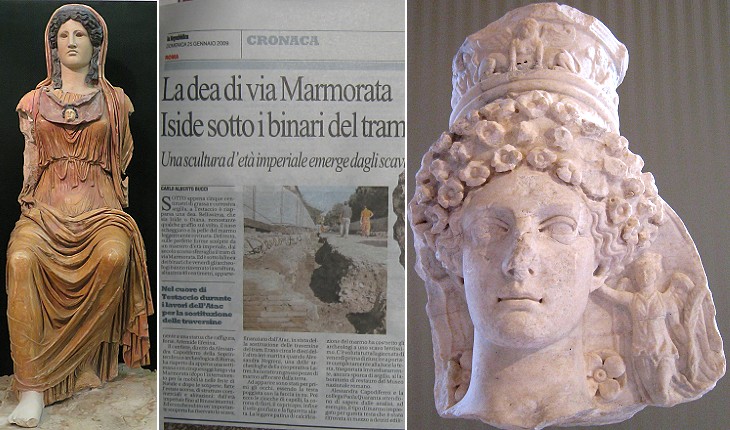 (left) Museo Nazionale Romano: Statue of Minerva (the head is modern) found in the 1920s in Via Marmorata; (centre) newspaper reporting the finding of a Head of Artemis (not Isis); (right) the head at Palazzo Altemps

Old Via Marmorata was replaced in the late XIXth century by a modern road which enabled the passage of tramways. In 2009, during maintenance repairs to the rails, the head of a statue portraying Ephesian Artemis was found, thus showing that there are still discoveries to be made in Rome. 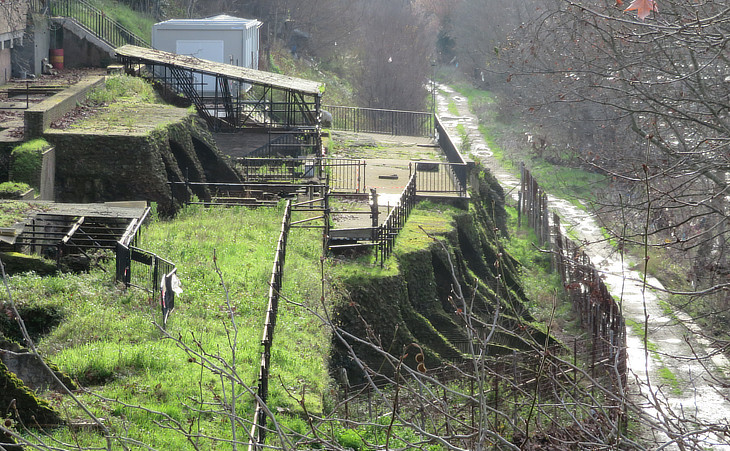 From the Arco di S. Lazzaro, a new road on the right, planted with trees, leads along the river to the ancient Marmorata, discovered 1867-1868, when many magnificent blocks of ancient marble were found buried in the mud of the Tiber. Recent excavations have laid bare the inclined planes by which the marbles were landed, and the projecting bars of stone with rings for mooring the marble vessels.
Augustus J. C. Hare - Walks in Rome - 1874 (left) Ancient warehouses along the river; (right) stones and broken columns found in the same site

In the XVIIIth century scanty remains of the Roman docks along the Tiber were still clearly visible. Pope Pius IX promoted their excavation (an inscription in Lungotevere Testaccio celebrates this initiative). The commodities carried to Ostia and Porto from the provinces of the Empire, were moved to small ships (see a mosaic at Ostia) which were towed-up to the docks of Testaccio.
The enlargement of the river bed in the 1880s stopped the excavations which were resumed in the 1990s on a minor part of the docks.

(left) A reconstructed ancient Roman wall in "opus reticulatum"; (right) reconstruction of the bull heads to which the ships were tied