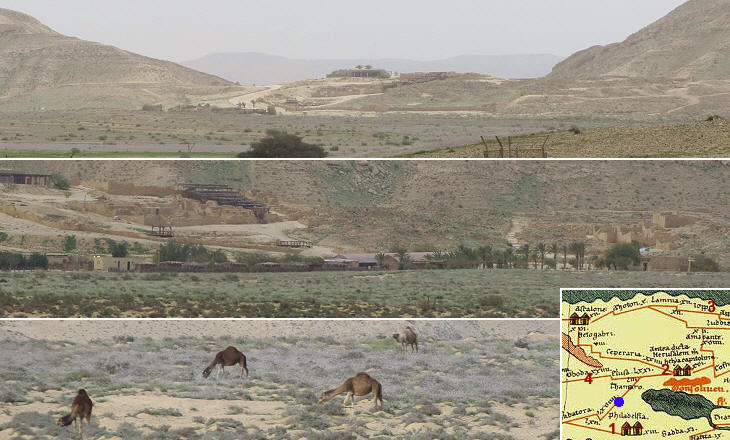 At the time of Pliny (Ist century AD) Mamfis was situated near the border between the Nabatean Kingdom and that of Judea on a trade route along which frankincense and myrrh from Arabia, most likely today's Yemen, were carried to Mediterranean Sea ports.
In another chapter of his immense book, Pliny indicated frankincense as one of the most expensive products of the vegetable world (it is a resin from Boswellia sacra, a small tree). 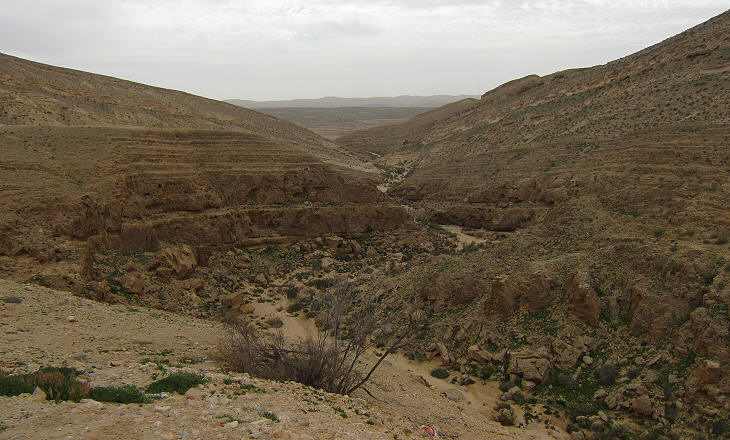 The country of the Nabatei, of which Petra was the chief town, is well characterized by Diodorus Siculus, as containing some fruitful spots, but as being for the greater part, desert and waterless.
Johann Ludwig Burckhardt - Travels in Syria and the Holy Land - publ. 1822
The southern side of the town was protected by a deep ravine, which in antiquity was not as dry as it is today. The ravine provided a route eastwards towards the Dead Sea and Petra. View westwards (above) and an ancient dam on Wadi Mamshit (below)

In this desert the water collects in a number of low bottoms and Wadys, where it produces verdure in winter time: and an abundance of trees with green leaves are found throughout the year. (..) The ground was covered with the large thorns of the Talh trees (acacias), which are a great annoyance to the Bedouins and their cattle. Each Bedouin carries in his girdle a pair of small pincers, to extract the thorns from his feet, for they have no shoes, and use only a sort of sandal made of a piece of camel's skin, tied on with leathern thongs. Burckhardt
Notwithstanding the major efforts made by Israeli authorities to reclaim the Negev Desert, the area which can actually be farmed is rather limited. This is probably due to the erosion of the soil which has made Negev a bare rock. In the lower areas the erosion has not been as destructive as on the hills and here and there the green patches of kibbutzim break the bleak landscape. 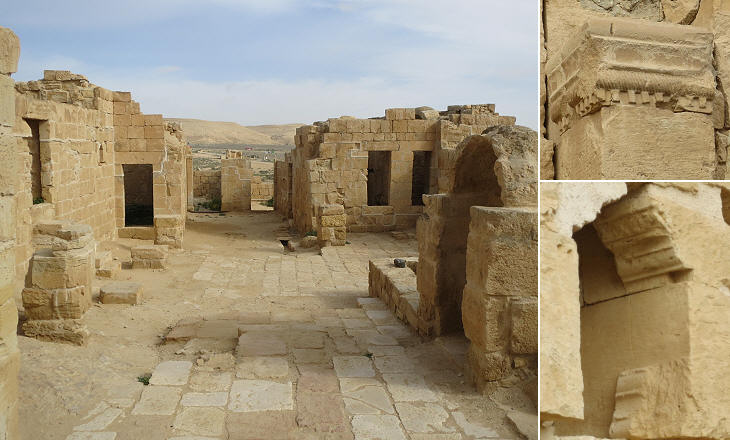 "The Wealthy House": (left) courtyard with a niche which probably housed a jar of water; (right) details

Most likely the majority of the inhabitants of Mamfis lived off farming and activities related to it, but those involved in the frankincense trade could achieve a very wealthy status because of the high profits they made. A large house has been identified in the western part of the town. It was structured around a paved courtyard. Mouldings and other decorative patterns embellished pillars supporting the roof. The Nabateans, as their monuments at Petra and Bosra show, were familiar with Hellenistic/Roman architecture. 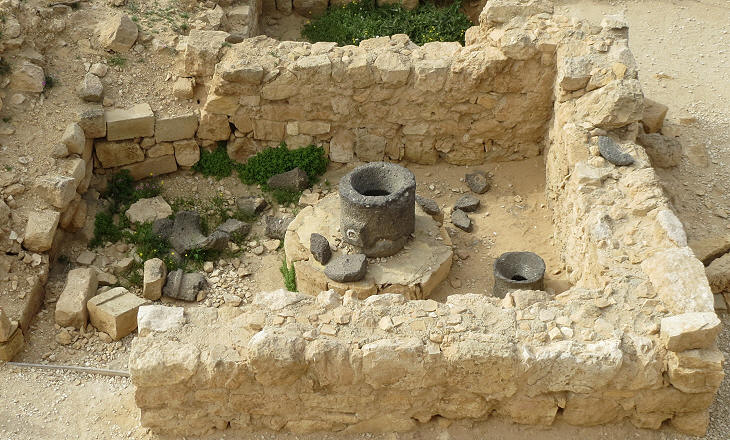 The presence of a flour mill is another indication that the territory around the town was farmable. The granite millstones probably came from Egypt and are almost identical to those found in other locations of the Roman Empire (e.g. Ostia). The Nabatean Kingdom was a buffer state between the Roman Empire and the nomadic tribes of the Arabian Desert until Emperor Trajan annexed it in 106 AD. 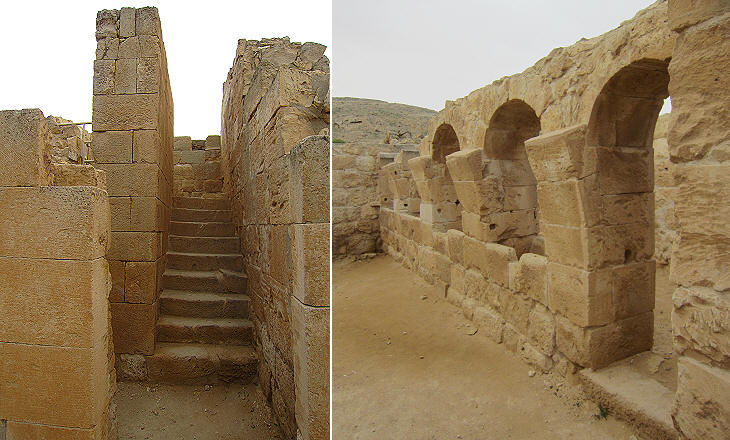 Unfortunately archaeologists have not found many inscriptions so the main buildings are generically indicated as "The Wealthy House" or "The Large House". The latter was perhaps something more than a private house. The presence of stables could indicate its owners received many guests, perhaps merchants who led a caravan towards the ports on the Mediterranean Sea. Their rooms were at the upper floor, a layout which eventually became typical of caravanserais. 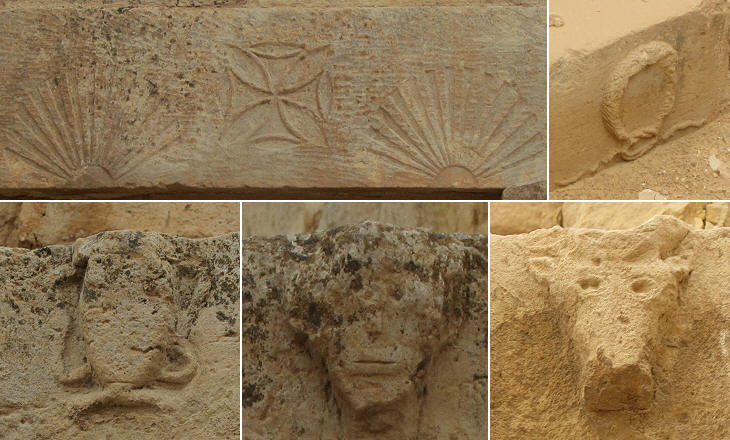 Reliefs at "The Large House"

"The Large House" was inhabited for a long period of time as its decoration includes small reliefs and a wreath together with a cross of the IVth century AD. Similar reliefs can be seen at Oboda. 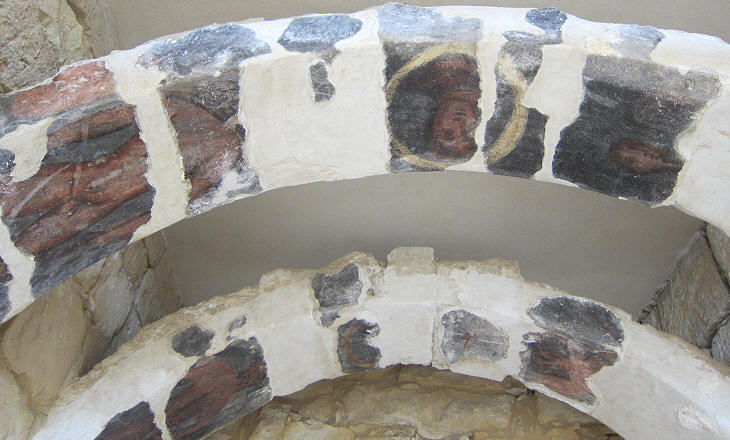 The most interesting finding at Mamfis is with no doubt an almost intact cubiculum, the bedroom of Roman houses, in what appears to be a private section of "The Large House". Latin cubare means lie down (hence concubine) and Roman couples preferred to lie down in a small room which fostered intimacy and which contained just the bed or the mattress on a raised platform. 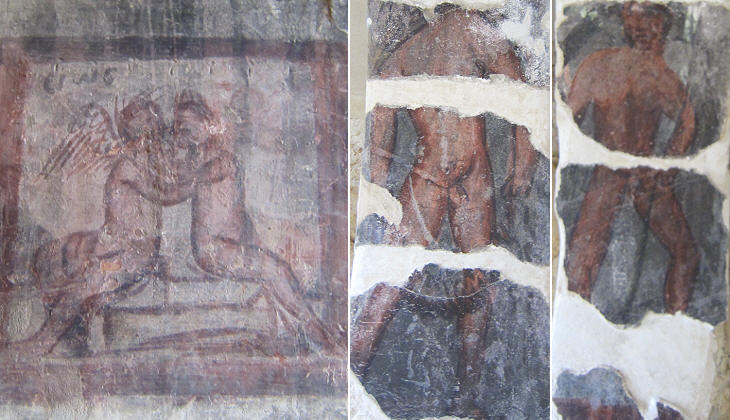 "The Large House": cubiculum frescoes; that on the left portrays Cupid and Psyche 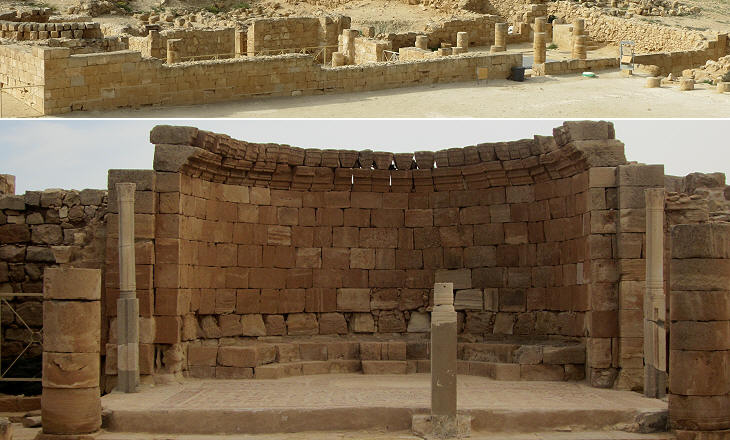 (above) St. Nilus' seen from a small tower near "The Wealthy House"; (below) reconstructed apse

In general there are not as many ruins of early churches in Israel as one would expect. Mamfis was abandoned after the VIIth century Arab invasion. Its churches fell down because of earthquakes and other natural causes, rather than being totally destroyed to make room for mosques (or other churches when the country was conquered by the Crusaders).
The church is called St. Nilus' because of an inscription saying that the church was founded by Nilus, but this Nilus may not have been St. Nilus of Sinai who lived as a hermit in that desert in the early Vth century and stayed for some time at Haluza, a town near today's Gaza Strip. 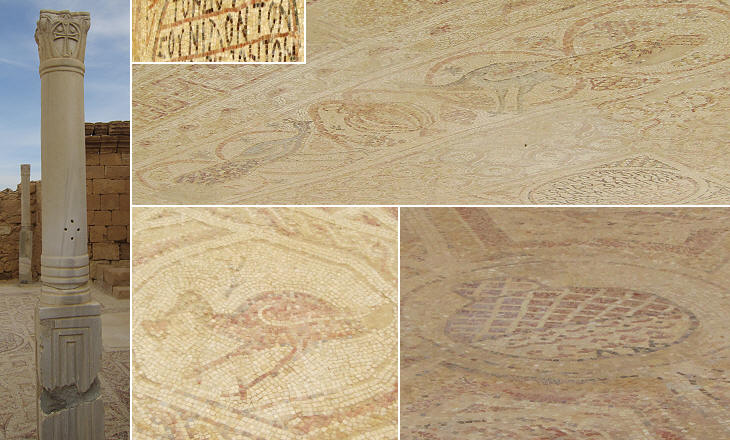 The floor of St. Nilus' was decorated with a large mosaic mainly based on geometric patterns framing small sections depicting birds and fruits which had a Christian significance such as the two peacocks (Resurrection) and the pomegranate (Resurrection but also the Community of the Believers). Peacocks however were a common subject also for non-Christian mosaics (e.g. at Zeugma or at Thysdrus) and have been found in mosaics of ancient synagogues too, e.g. at Ein Gedi. 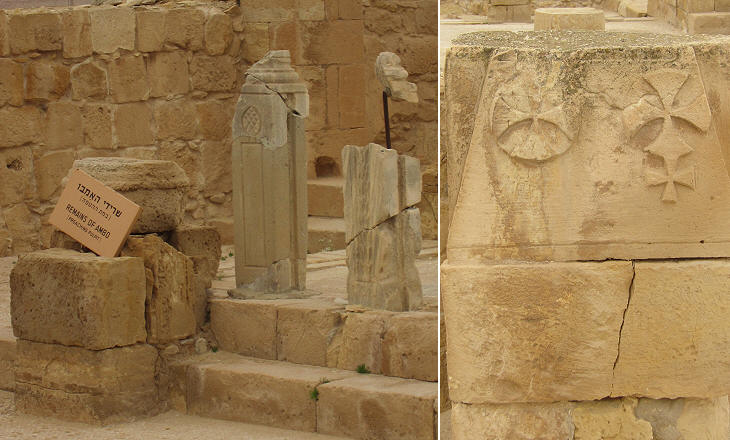 A second large church stands at the top of the hill, perhaps on the site or near a temple. The ambo was made of cipollino, a green stone from Greece which was very popular throughout the Roman Empire in the IInd century AD. The church was probably built after 435 when Emperor Theodosius II ordered the destruction of all pagan temples in the Eastern Roman Empire. 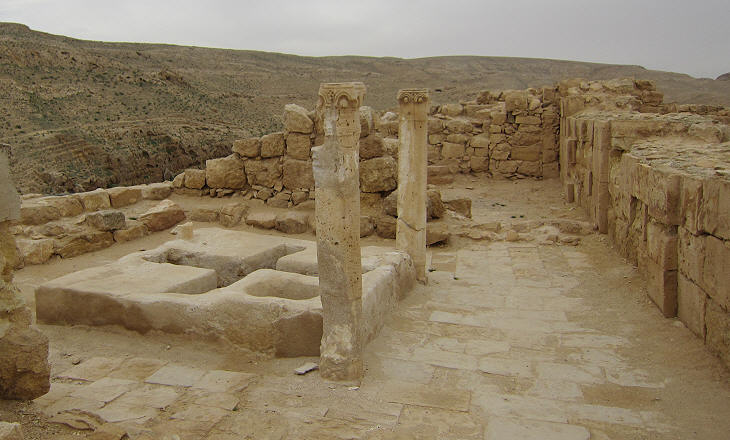 Baptistery (the font has been partly reconstructed)

Baptism had a greater significance for Early Christians than it has today. It was administered to catechumens, adults who had received a proper instruction in the principles of the Faith. Baptism was performed by immersing the catechumen in a small basin having the shape of a cross and usually three steps to descend. The basin was protected by a small canopy and it was often decorated with marbles e.g. at Kantara or mosaics e.g. at Kelibia, both in Tunisia. 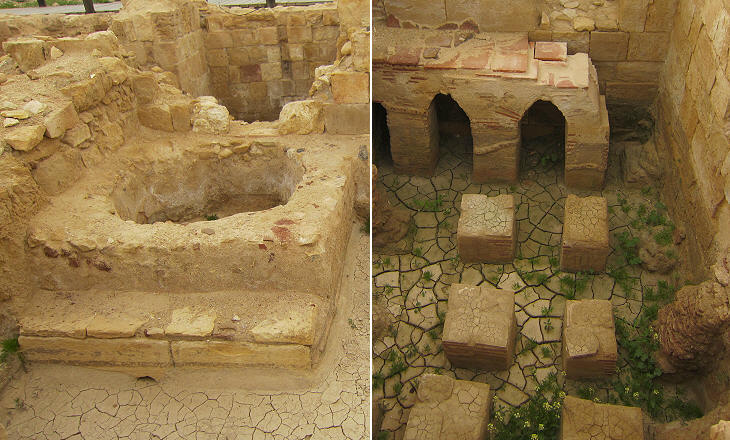 The main water reservoir was located at the foot of the hill and near it archaeologists have found small baths, most likely public ones. They were built with the usual Roman heating system.
The image used as background for this page shows a representation of Mamfis in a VIth century mosaic found at Madaba in Jordan.