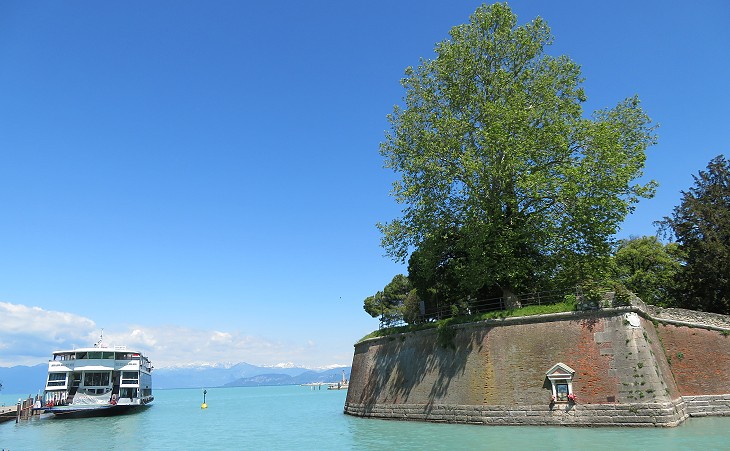 Fourteen miles west from Verona stands the town of Peschiera in the territory of Venice and province of Verona. (..) It is situated in an island at the south-end of the lake di Garda on the river Mincio which here comes out of the lake. (..) The town of Peschiera is pretty well fortified, and belonged formerly to the duke of Mantua but was taken by the Venetians, in 1441.
Thomas Nugent - The Grand Tour - 1749

Porta di Verona (1553); the Winged Lion of Venice was removed in 1797 by the French (a modern one was placed there in 2009); the inscription warned enemies not to defy the lion's rage

The site of Peschiera was fortified by the Romans because of its strategic position along Via Postumia, a road which linked Aquileia with Genoa, across Verona. The Latin name of the oppidum was Arilica, but over the centuries it became known as Peschiera, because of the abundance of fish (It. pesce) which was caught there. In the XIIIth/XIVth centuries the Scaligeri, the Signori (Lords) of Verona, built the fortress referred to by Dante, which most likely resembled that at nearby Sirmione. In 1549 century the Venetian Senate decided to entirely redesign the fortifications of the town and the medieval walls and towers were incorporated into a large bastion (Contarana) of the new fortress which was completed by 1553. 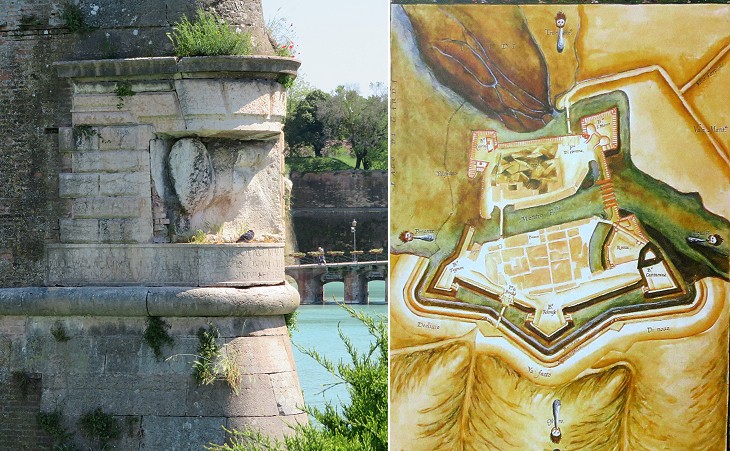 (left) Monumental decoration of the angle of Tognon Bastion with an erased Winged Lion and a long Latin inscription celebrating its completion in 1552; an erased Venetian coat of arms at Guerini Bastion is shown in the image used as background for this page; (right) plan of Peschiera in ca 1600

According to records the construction of the fortress was supervised by officers appointed by the Venetian Senate among the members of the aristocracy after whom the five bastions were named. The overall responsibility for the enterprise was assigned to Guidobaldo II Della Rovere, Duke of Urbino and Capitan General di Teraferma, i.e. military commander in the Italian territories of the Republic. It does not appear that Michele Sammicheli, the military architect who designed many Venetian fortifications, e.g. at Verona and Candia (Iraklion), was directly involved in those of Peschiera, but in 1557 his nephew Giangirolamo was asked for advice on some betterments. Fortified city of Peschiera del Garda (Italy): This component of the Stato da Terra acted as the 'hinge' between the City of Venice and its territories further to the west beyond the Mincio River (such as Brescia and Bergamo). It is a fortified city, located in relation to the lake and river systems (and termed a 'freshwater' fortification). It consists of the city walls (5 ramparts in a 'pentagon' plan) with two gates, canal and associated urban fabric.
From the UNESCO synthesis of the universal value of Peschiera which in 2017 was included in the World Heritage List (together with other Venetian fortresses including Forte S. Andrea in Venice and Palmanova). 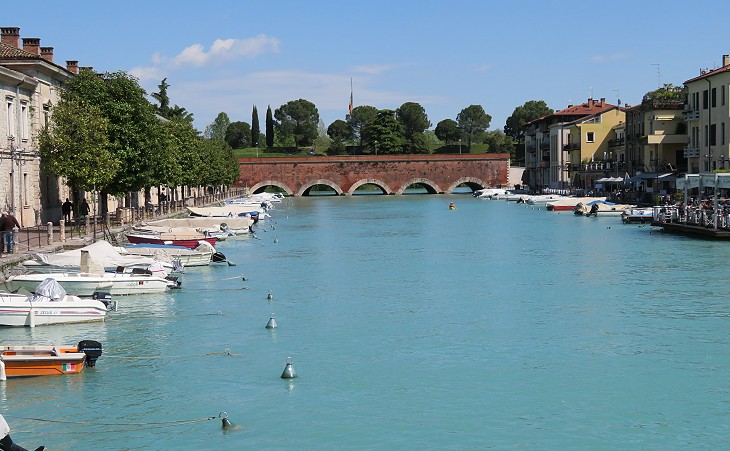 The canal which divides the town

In periods of political turbulence Peschiera housed a small fleet. The Republic of Venice did not entirely control Lake Garda; in addition the ships could help in the defence of the fortress by sallying through tunnels which were cut into the rampart near San Marco Bastion. There were other Venetian fortifications around the lake and in September 1786 J. W. Goethe was suspected of being a spy of Emperor Joseph II because he made a drawing of a castle at Malcesine, north of Peschiera: I will make my stay here as useful as I can, especially by making a drawing of the castle, which lies close to the water, and is a beautiful object. (..) According to my plan, I went early in the morning into the old castle, which having neither gate nor guard, is accessible to everybody. Entering the court-yard, I seated myself opposite to the old tower, which is built on and among the rocks. (..) I had not sat long before several persons entered the yard, and walked backwards and forwards, looking at me. The multitude increased, and at last so stood as completely to surround me. I remarked that my drawing had excited attention; however, I did not allow myself to be disturbed, but quietly continued my occupation. At last a man, not of the most prepossessing appearance, came up to me, and asked me what I was about. I replied that I was copying the old tower, that I might have some remembrance of Malcesine. He said that this was not allowed, and that I must leave off (..) because the Emperor Joseph was a troublesome gentleman, who certainly entertained many evil designs against Venice; and I might probably have been one of his subjects, appointed by him, to act as a spy on the borders. Italian Journey - Translation by Charles Nisbeth San Marco Bastion and the passages for boats

The purpose of the projecting bastions was to house guns which could fire on the enemies trying to climb/breach the walls. Early examples of these bastions were developed in the late XVth century in Italy, e.g. at San Leo and Nettuno. The Venetians greatly relied on the construction of state-of-the-art fortresses to protect their possessions in the Levant, but they often failed in appropriately garrisoning them, as it occurred at Palamidi and other fortresses in the Peloponnese in 1715. 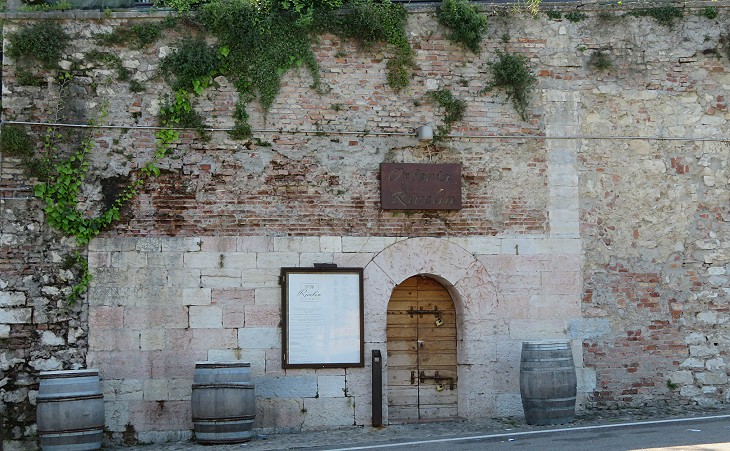 The initial design of the Italian fortresses was improved by the addition of counterguards and cavaliers (e.g. at Valletta) and outer works as ravelins, hornworks and crownworks (e.g. at Siracusa). Porta Brescia faced a hilly ground which, if unprotected, would have given the enemy a commanding position over the fortress. It was therefore fortified by a ravelin, a triangular bastion on the other side of the moat. The outer works of many fortresses, including Peschiera, were dismantled when they became useless from a military viewpoint, but they can still be seen at Palmanova. Bridge of Porta Brescia and Mount Baldo beyond the fortress; the gondola ride around the bastions is cheaper, but less evocative, than at Venice

Peschiera has been very strongly fortified of late years, first by Napoleon, and since by Austria: it has been the scene of many sanguinary conflicts. It underwent a siege of seven weeks in 1848, when it surrendered to the Piedmontese army under Carlo Alberto.
John Murray - Handbook for Travellers in Northern Italy - 1852
The Austrians regained control of Peschiera after a few weeks and they strengthened its defence by building a series of satellite-fortresses around it. In 1859 the French and Piedmontese armies defeated the Austrians at Solferino, few miles south-west of Peschiera; in the peace treaty which ended the war, the fortress remained in Austrian hands and its importance increased because it was very near the border with the newly created Kingdom of Italy.

Gates of the citadel (1575) at Contarana Bastion

Peschiera is almost invisible until we enter the bastions which protect its harbour. Partly situated on an island formed by the Mincio where it issues from the lake, it has been strongly fortified by each succeeding government in Lombardy. (..) Two-thirds of the buildings in the miserable town are barracks.
Augustus J. C. Hare - Cities of Northern and Central Italy - 1876
Two million tourists visit this fortress each year. UNESCO
In 1866 Veneto was annexed to Italy and Peschiera lost its strategic relevance, but it continued to house military facilities. It acquired a sinister fame (together with the fortress of Gaeta) because its citadel was turned into an army prison. This use was discontinued in 2001 and since then the town has become a popular tourist attraction. 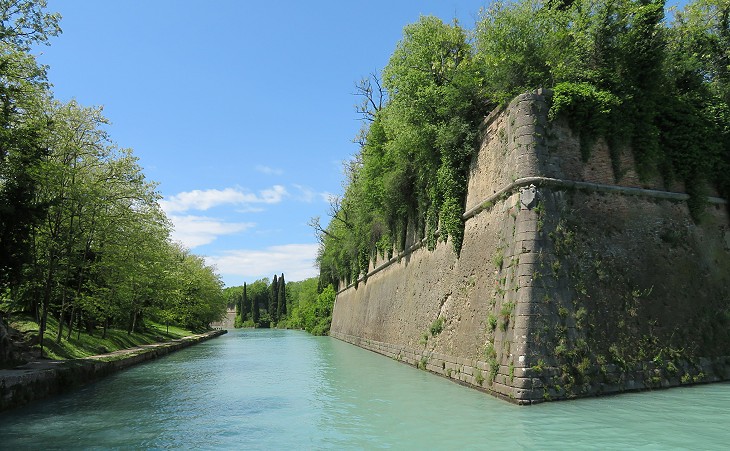 Contarana Bastion and Feltrin Bastion in the background