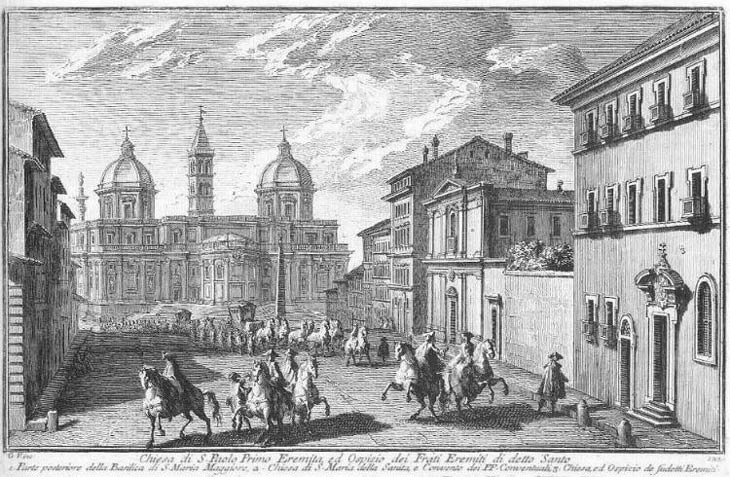 The real subject of this 1756 plate is the tribune of S. Maria Maggiore on the Esquiline Hill, rather than the unassuming friary of S. Paolo Primo Eremita. It is one of three etchings by Giuseppe Vasi showing the Basilica (the others are plate 48 - front view in 1753 and plate 157 - side view in 1756). In 1771 Vasi depicted the tribune in a larger etching. The view shows a section of Strada Felice, the street which links S. Maria Maggiore to SS. Trinità dei Monti. The street was opened by Pope Sixtus V whose name before the election was Felice Peretti.
The view is taken from the green dot in the small 1748 map here below. In the description below the plate Vasi made reference to: 1) Rear side of S. Maria Maggiore; 2) S. Maria della Sanità; 3) S. Paolo Primo Eremita. The small map shows also 4) S. Norberto; 5) S. Dionigi Areopagita; 6) S. Vitale. 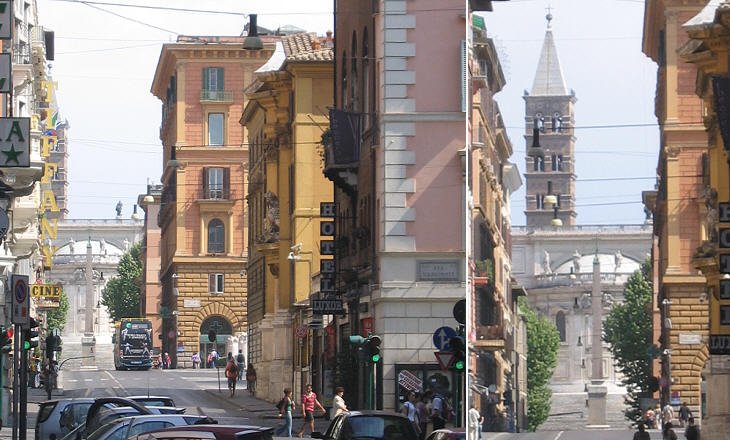 The area was largely modified by the opening of Via Nazionale in the 1870s. The photo was taken immediately before the intersection between this street and Strada Felice. In the 1920s the construction of Palazzo del Viminale led to pulling down S. Maria della Sanità and part of the monastery adjoining S. Paolo Primo Eremita.
Today Strada Felice is divided into three sections:
a) Via Agostino Depretis from S. Maria Maggiore to Via Nazionale;;
b) Via delle Quattro Fontane from Via Nazionale to Piazza Barberini on the other side of the Quirinal Hill;
c) Via Sistina from Piazza Barberini to SS. Trinità dei Monti. 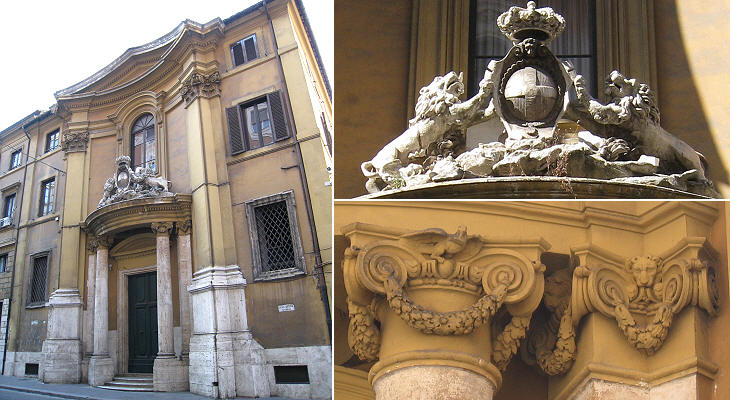 (left) Façade; (right-above) coat of arms of the Italian Royal Family (Savoia) between two lions (the coat of arms replaced a palm tree); (right-below) capitals with a raven and a lion

The church was dedicated St. Paul of Thebes who is regarded as the first Christian hermit. He lived in the desert in a cave where he found a spring. A palm tree provided him with food and leaves with which he covered himself. Every day a raven brought him some bread (a raven prevented St. Benedict from eating poisoned food). At his death two lions dug his grave by using their paws (he shared this honour with St. Onophrius).
A religious order inspired after the life of this saint was endorsed by Pope Clement V in 1308. The Roman monastery was founded in 1669; the monks were mainly Hungarians and Poles. The church shown in the plate was replaced by a new one which was designed by Clemente Orlandi in time for the 1775 Jubilee Year; the small portico has points in common with Gian Lorenzo Bernini's S. Andrea al Quirinale, whereas the use of concave and convex lines recalls S. Carlo alle Quattro Fontane by Francesco Borromini. The church was deconsecrated in 1873 and today it belongs to the Italian Home Office.

Buildings in Via delle Quattro Fontane: (left) coat of arms of Pope Pius IV inside a courtyard ; (right) portal decorated with the flaming heart of the Congregation of the Oratory which was founded by St. Philip Neri

There were two other monasteries with a church in this section of Strada Felice (S. Norberto and S. Dionigi Areopagita). They are both lost although some references to religious institutions can be found in the current buildings. 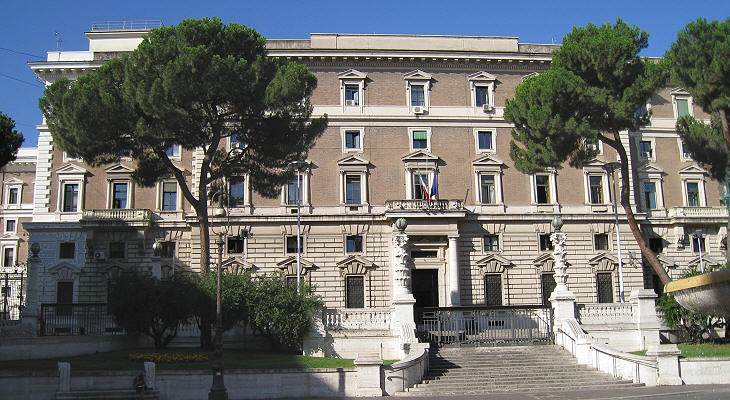 Palazzo del Viminale is one of the last stile umbertino buildings in Rome. It was designed in 1911 by Manfredo Manfredi and it was completed in 1925. The Italian Cabinet (Consiglio dei Ministri) met in this palace until 1961 (today it meets at Palazzo Chigi). Its construction and that of other adjoining buildings led to the levelling of a vast area, thus making the Viminal Hill rather difficult to notice. 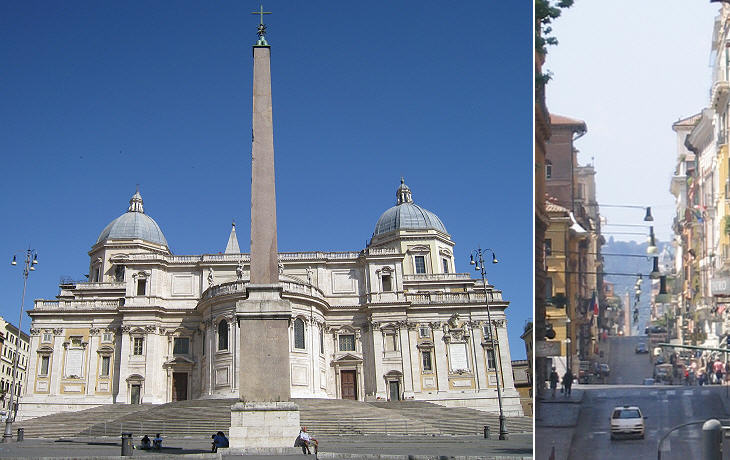 (left) The obelisk; (right) view from the base of the obelisk towards that of SS. Trinità dei Monti

The obelisk was relocated to the Esquiline Hill by Pope Sixtus V in 1587; originally it was at the entrance of Mausoleo di Augusto together with a second obelisk which is now in Piazza del Quirinale. The Pope dedicated the obelisk to the Holy Cross: a bronze cross was placed above the heraldic symbols of the Pope (as you can see in the image used as background for this page). Learn more about this and other obelisks in Rome.
From the base of the obelisk it is possible to see the full length of Strada Felice. 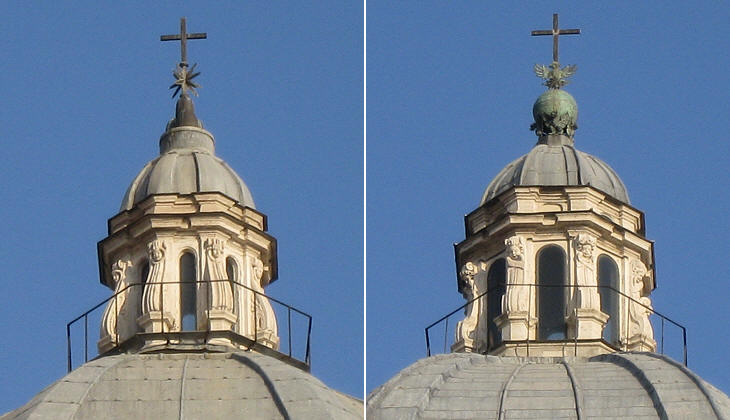 The rear view of S. Maria Maggiore is marked by the large domes of Cappella Sistina, built by Pope Sixtus V in 1587 and of Cappella Paolina which was built a few years later by Pope Paul V. They can be distinguished by the heraldic symbols of the popes (those of Pope Paul V were eagles and dragons). 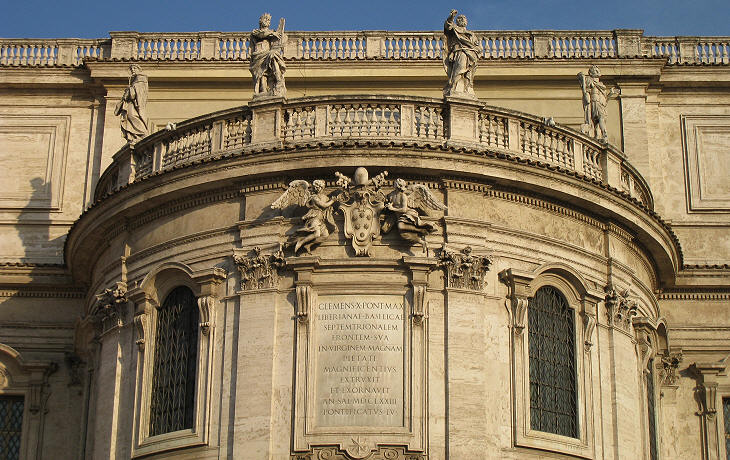 The completion of the two chapels and of their domes made the size of the old medieval apse seem too small. In 1669 Pope Clement IX endorsed a project by Gian Lorenzo Bernini (it opens in another window) which was based on the construction of a new larger apse surrounded by a colonnade. The cost of the project was initially underestimated by Bernini, perhaps to ease the papal approval. Pope Clement X in 1670 stopped the execution of the project. In 1673 Carlo Rainaldi redesigned the apse appearance, making it look larger, but without touching the mosaics of its interior (unlike what occurred to the apse of S. Giovanni in Laterano in the 1880s). Bernini had planned to decorate the new apse with 47 statues, Rainaldi drastically reduced their number to four. They joined the many Roman statues which stand close to Heaven. 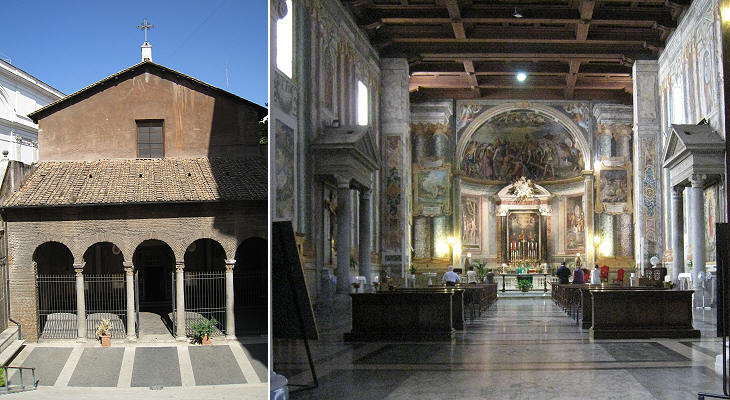 Going by a little unfrequented street, running under the foot of Montecavallo, I came to the church of St. Vitalis, which stands joined to the Garden of the Jesuits Novitiat.
Richard Lassels' The Voyage of Italy, or a Compleat Journey through Italy in ca 1668
In the XVIIIth century a narrow downhill street off Strada Felice led to the old church of S. Vitale which Pope Sixtus IV rebuilt in 1475. Today S. Vitale is located along Via Nazionale; because town planners wanted the new street to have a smooth inclination they raised the level of the ground and the church ended up below the current street level.
You may wish to see the façade as it appeared in a 1588 Guide to Rome (it has not changed very much). 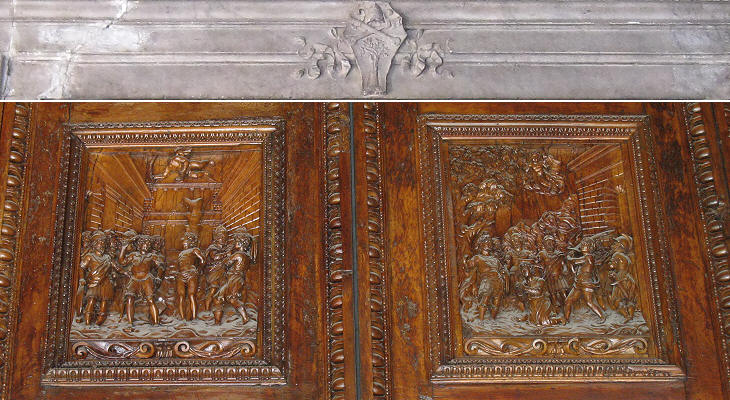 (above) Coat of arms of Pope Sixtus IV on the entrance lintel; (below) 1602 wooden panels of the door with scenes of the martyrdoms of St. Gervase (left) and St. Protase (right), sons of St. Vitalis

In 1595 S. Vitale was assigned to the Jesuits of S. Andrea al Quirinale who undertook a large program of restoration and decoration of the building. The simple façade leads to a very interesting interior which was painted with dramatic scenes of sufferings and deaths of martyrs. The finely carved doors give the visitor an anticipation of what he is going to see. 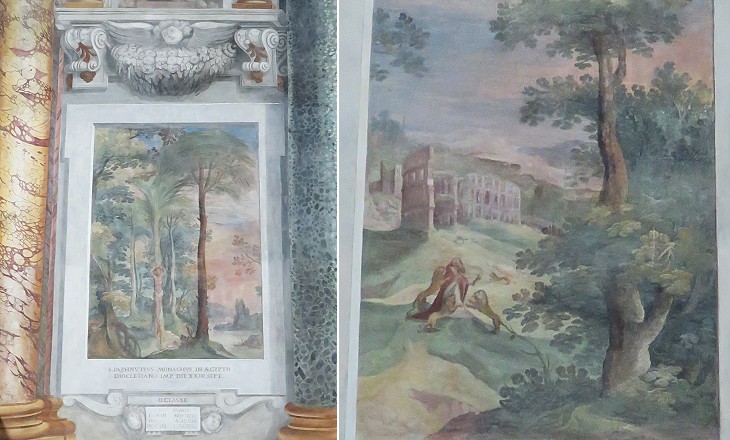 The paintings at S. Vitale had an educative purpose. They functioned as a training-ground for apostolic work, in the Roman as well as in the international context. Young Jesuit novices were taught how to fulfil their duties as parishioners and missionaries, for which they could practice on the Italian and foreign visitors. The primary aim was to teach the Christian Doctrine according to the Catholic Church, either with the aim of strengthening the Faith, or of converting pagans in Protestant countries or faraway regions. (..) As exemplified in the "Peinture Spirituelle" by Fr. Louis Richeome, (1544-1625) a French humanist and Jesuit, the tour of S. Vitale was a form of instruction in Christian Doctrine with the help uf "mute" images. These would turn into "speaking" images when the language they spoke was properly explained.
Arnold A. Witte - The Artful Heritage - 2008
Some of the frescoes however offered visitors a chance to rest their eyes on large landscape paintings where the sufferings of the martyrs were hardly noticeable. 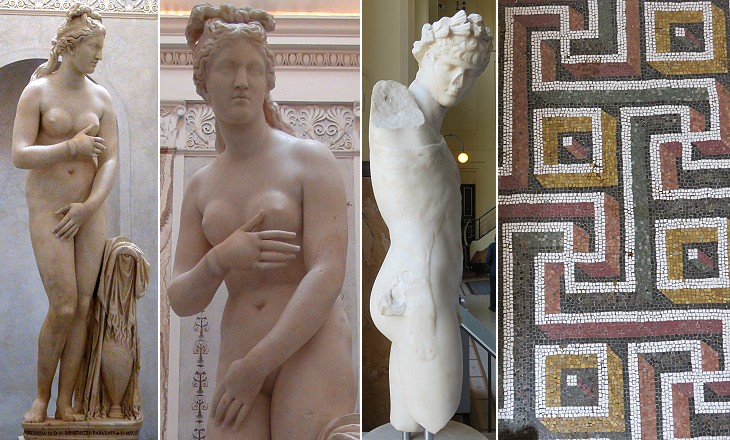 (left) Musei Capitolini: Venus found in ca 1670 near S. Vitale (IInd century AD copy of a Greek original, perhaps the Venus of Cnidus); (centre) Centrale Montemartini: Antinous found in 1881 near Via Nazionale (Via Modena); Palazzo dei Conservatori: Sala della Lupa: ancient mosaic depicting a three-dimensional maze found in 1893 near Via Nazionale (Vic. Colonnesi); it can be seen also at Brescia and Ravenna

In 1752 Pope Benedict XIV donated a statue of Venus to the City of Rome which became known as the Capitoline Venus. It was seized by Napoleon, but it was returned to Rome in 1815. Mark Twain wrote a short story about the statue after having seen it in 1867: The Capitoline Venus is still in the Capitol of Rome (in a specially built cabinet at Palazzo Nuovo) and is still the most charming and most illustrious work of ancient art the world can boast of.
The development of the land along Via Nazionale near S. Vitale led to discovering a statue of Antinous, the favourite of Emperor Hadrian. He was portrayed while taking part to a Dionysiac dance; he wears the skin of a panther, a symbol of Dionysus. 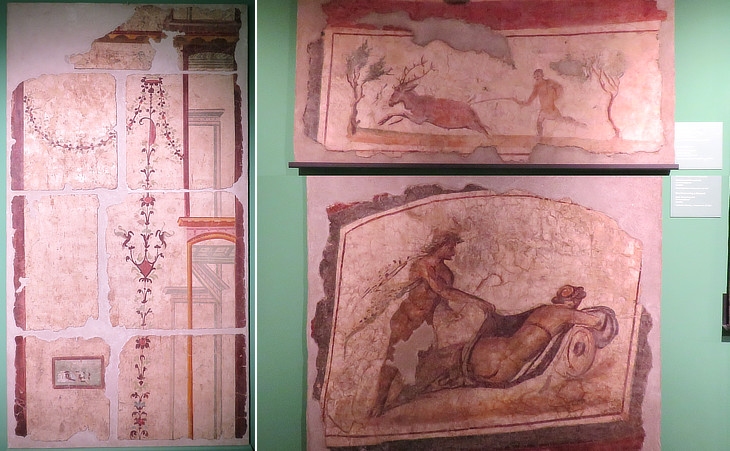 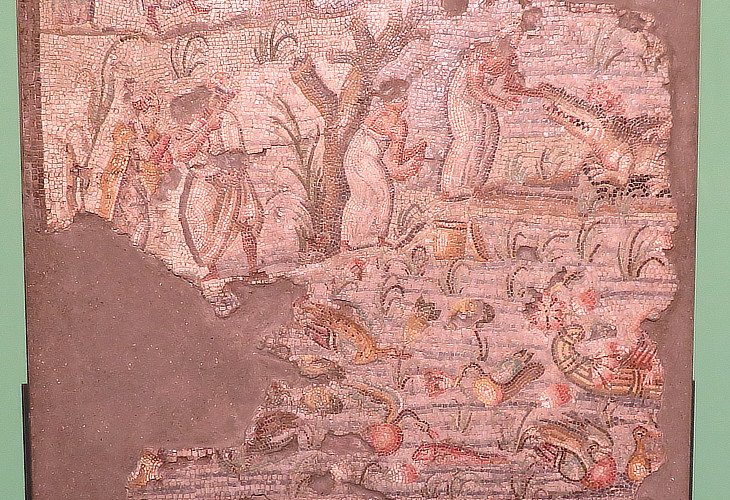 Centrale Montemartini: floor mosaic discovered in 1882 near S. Vitale (late Ist century BC); it depicts a riverside landscape and a priest feeding a sacred crocodile; it is a fine example of "Nilotic" mosaic in which there are no frames or geometric decorations; a very large one was found at Palestrina