Marco Polo visited Yazd in 1272 and wrote this short account about the town: Yazd also is properly in Persia; it is a good and noble city, and has a great amount of trade. They weave there quantities of a certain silk tissue known as Yasdi, which merchants carry into many quarters to dispose of. It is therefore proper to say that Yazd was a leg of the Silk Road between Europe and China. Yasdi is believed to have been an expensive gold-threaded cloth. When the Venetian merchant visited Yazd the town was ruled by a local dynasty of atabegs (governors) who recognized the suzerainty of the Mongol Ilkhans. 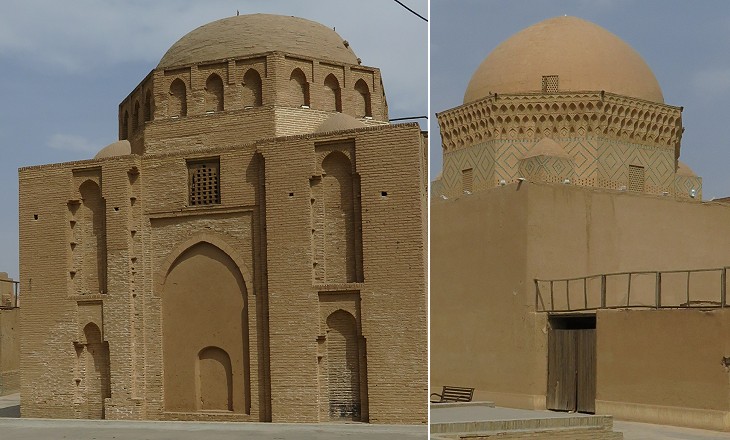 Marco Polo might have seen these two buildings which are situated one next to the other in the historical Fahadan quarter of Yazd. The Twelve Imams are the successors of the Prophet, but they are different persons for the Sunnis and for the Shi'as. The shrine was built in the XIth century by the local rulers of Yazd and it does not contain any tombs. The lack of later tile decoration emphasizes its structural elements. The shallow dome is rather unusual in Persia and gives the shrine an Ottoman flavour.
According to a traditional account based on a verse by Hafez Shirazi, one of the most important Persian poets, Alexander the Great built a prison at Yazd. The building by this name was most likely a XIIIth century medrese, but it was abandoned for centuries and eventually used as an oil factory. Its current appearance is the result of an extensive 1980s restoration. 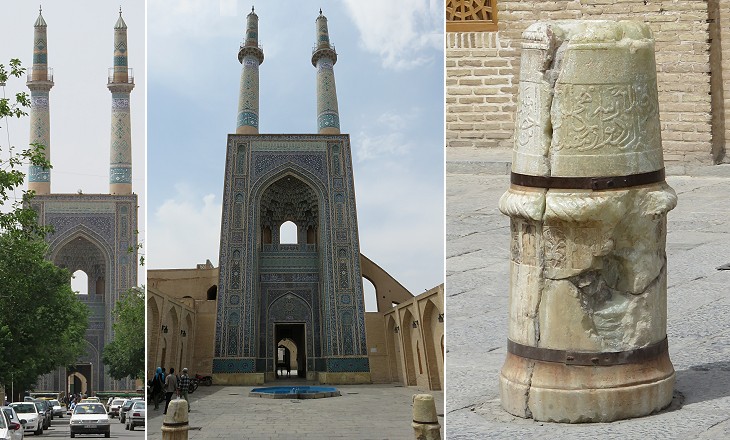 Yezd stands on the outskirts of a desert, and north of it for league upon league, extends the appalling waste that has here stamped upon Persia the imprint of an eternal desolation. (..) The only edifice of any distinction is the Masjid-i-Jamii (Friday Mosque), (..) whose imposing blue-tiled facade and soaring minarets, although the main structure is in ruin, are the most imposing features in a view of the city.
George N. Curzon (Lord Curzon) - Persia and the Persian Question - 1892
The construction of the Friday Mosque began in 1324 at the initiative of Sayyed Rukn ad-Din, a local notable. In that time the Ilkhanide Empire was losing its strength. In 1339 Mubariz al-Din Muhammad, governor of Yazd, declared his independence from the Ilkhanids. He conquered Isfahan and Shiraz and he founded the Muzaffarid dynasty which ruled over Central Persia until 1393. 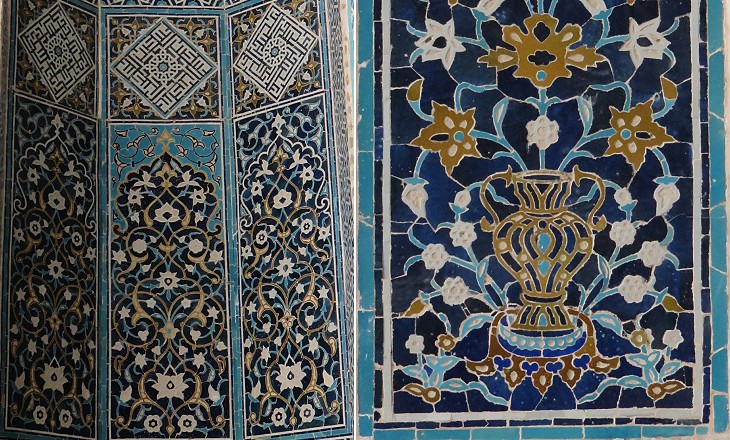 The decoration of the Friday Mosque was in part renovated in the XVIIIth century and restored in the XXth century. Sections of the main portal retain the original ceramic mosaic made up by pieces of tile cut to shapes to fit the intended pattern. It was based on a limited number of colours: turquoise, lapis lazuli, white and ochre. Mosaics were used until the early XVIIth century when they were replaced by multi-coloured fired tiles which were cheaper and quicker to fix on the wall.
The vault of the portal has a very elaborate decoration based on the same colours (you can see it in the introduction to this section). Friday Mosque: (left) main prayer hall; (right) mihrab; the image used as background for this page shows a detail of the light blue geometrical patterns on the vault of the passage leading to the mihrab. They are formed from a multiplication and rotation of the word "Allah"

The oldest part of the complex consists of an iwan with upper galleries, a domed chamber and small prayer rooms. In Persia and in particular at Yazd prayer rooms of historical mosques are completely open towards the courtyard. The town has extremely hot temperatures for most of the year and the design of the Friday Mosque was aimed at favouring the movement of air between the courtyard and the domed chamber. In winter smaller prayer rooms are used; they are situated at the sides of the main one and separated from it by movable screens.
The mihrab is a half-octagonal niche fully decorated with a glazed tile mosaic framed by a calligraphic inscription band in white thuluth script on a blue background. 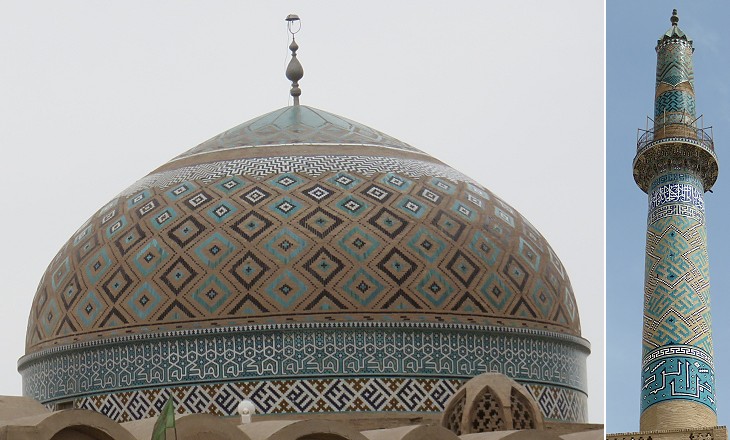 Friday Mosque: (left) dome (the lower blue band is a modern restoration); (right) one of the two minarets of the main portal

Another important structural feature of the mosque is the dome of the main prayer hall. It consists of two domes with a space of two feet separating them at their base (this feature was adopted in Florence and Rome too). The exterior dome is decorated with a geometric pattern of blue and black tile mosaics on a beige background. 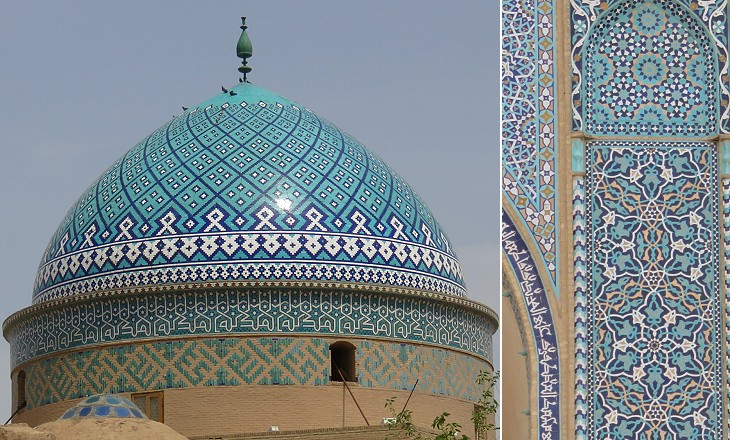 Shrine of Sayyed Rukn ad-Din: (left) dome (you may wish to see how it was in 1934 - Photo by Robert Byron - Copyright Conway Library, Courtauld Institute of Art - it opens in another window); (right) detail of the portal

Sayyed Rukn ad-Din commissioned a complex of buildings adjoining the Friday Mosque and including a mosque, a library, a medrese and a mausoleum, to form the 'Institute of the Time and the Hour', a centre for astronomical studies. Only the square, domed mausoleum still stands, known locally as the Mosque of Vaqt u Sa'at (the Time and the Hour). The lower part of the dome was decorated with blue tiles forming words, similar to what had been done at the Friday Mosque. The decoration of the rest of the dome (as well as that of the portal) is brand new. 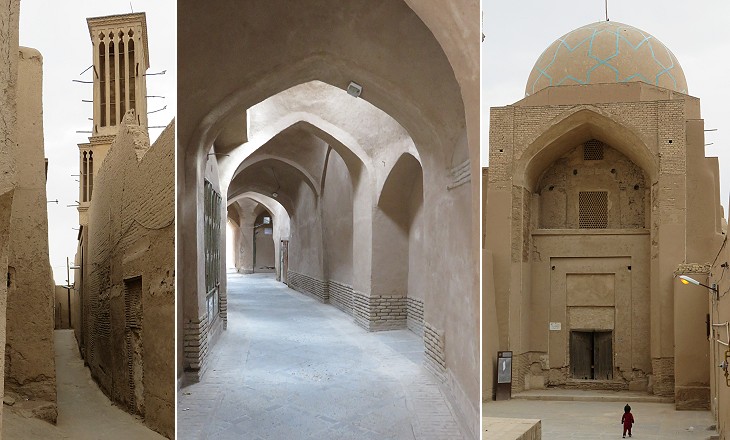 At present, though the Governor has ambitious plans, only one boulevard has been driven through the old labyrinths. Lovers of the picturesque deplore even this. But it is a boon to the inhabitants, who now have somewhere to walk, breathe, meet each other, and survey the distant mountains.
Robert Byron - The Road to Oxiana - Macmillan 1937 (piece written in March 1934).
Today Byron would write: Only one old labyrinth has survived, the rest of Yazd is a series of large boulevards and modern buildings.
The Fahadan neighbourhood surrounds the Friday Mosque. Its section between the Friday Mosque and the Shrine of the Twelve Imams has been restored and it houses some hotels, restaurants and tourist shops. The section between the Friday Mosque and Kamalieh Medrese is in a dilapitated condition. The dome of the tomb at Kamalieh Medrese retains its decoration with blue tiles forming star-like geometric patterns. 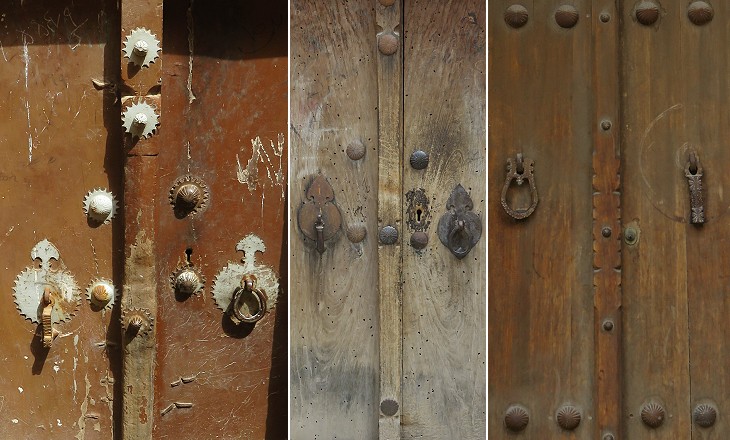 Old door knockers in Persia come in two types: one for men and one for women. Knockers for men are heavier and make a strong sound. Knockers for women have a ring shape that makes a lighter sound. In this way people inside the house knew who was knocking and were able to send a member of the family of the same gender to the door. If only women were in the house a heavy knock would alert them that they needed to cover themselves because they were going to open the door to a man, since they do not cover to that extent when at home. 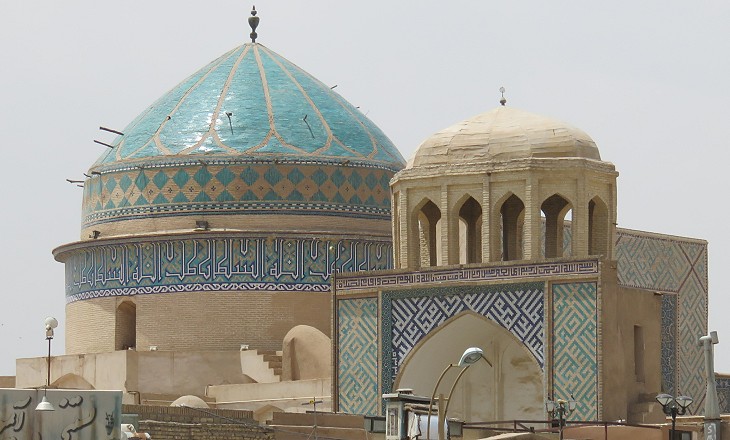 In 1393 Timur conquered Persia, but Yazd was not adversely affected as it became the capital of a large province including Shiraz and Kerman. In 1436 Jalal Al-din Chaqmaq Shami, governor of Yazd, began the construction of a complex outside the city walls. It included a large square, a caravanserai, public baths and a large bazaar. The new neighbourhood became and still is the commercial centre of Yazd. The slightly pyramidal dome of the mosque was embellished with a turquoise tile work forming a lotus flower. 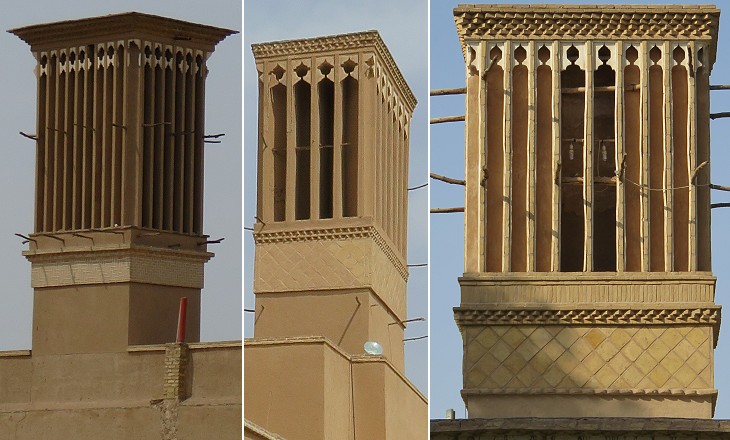 Water is brought by underground channels, of which there are said to be over Seventy, and the domed reservoirs (see one at Ardestan) approached by steep flights of steps, are among the chief glories of Yezd. Lord Curzon
The towers of Yazd are square and catch the wind from all four quarters by means of hollow grooves, which impel it down into chambers beneath. Two such chambers at either end of a house set up a draught through the length of it. Byron
The inhabitants of the Persian tableland and especially those living in its eastern drier part developed an elaborate system of underground canals to bring water to their towns. The canals needed ventilation to allow access to workers in charge of their maintenance. Eventually the technique developed to ventilate the tunnels was used for houses, at least for those of the wealthy. The skyline of Yazd is characterized by wind towers. The wooden poles projecting from them (and ropes) were used to allow cleaning of the grooves, because they do not have stairs inside. 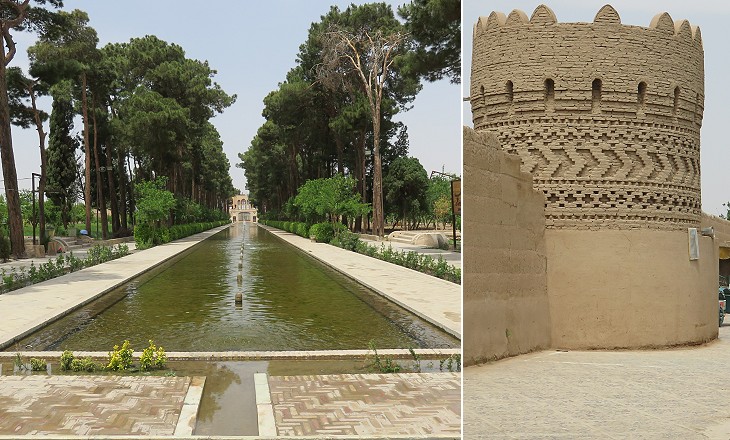 In 2011 UNESCO added Bagh-e Dolatabad and other eight Persian gardens to their list of World Heritage Sites. According to UNESCO the design of the Persian garden can be traced back to that built for Cyrus the Great at Pasargadae. Most of the gardens included in the list date XVIIth century or later (you may wish to see Chehel Sotun at Isfahan, Bagh-e Eram at Shiraz and Bagh-e Fin at Kashan). Bagh-e Dolatabad was built in 1712 for Mohammad Tagi Khan, governor of Yazd. The defensive tower is very similar to those Karim Khan Zand built at his palace/fortress in Shiraz (you can see it in the introduction to this section). 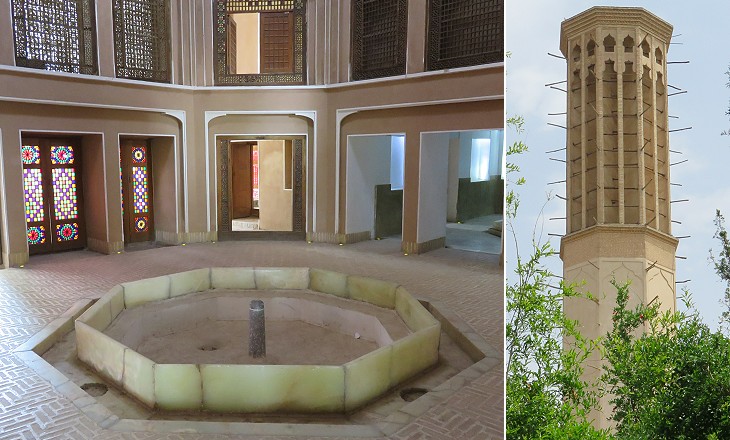 This and the other gardens listed by UNESCO are characterized by small pavilions facing very long rectangular ponds which reflect their image. The ponds have a minimal downward slope which makes the water slowly move away from the building. The pavilions could house only a limited number of persons. The main pavilion at Bagh-e Dolatabad was ventilated by the tallest wind tower of Yazd (rebuilt after it collapsed in the 1960s). 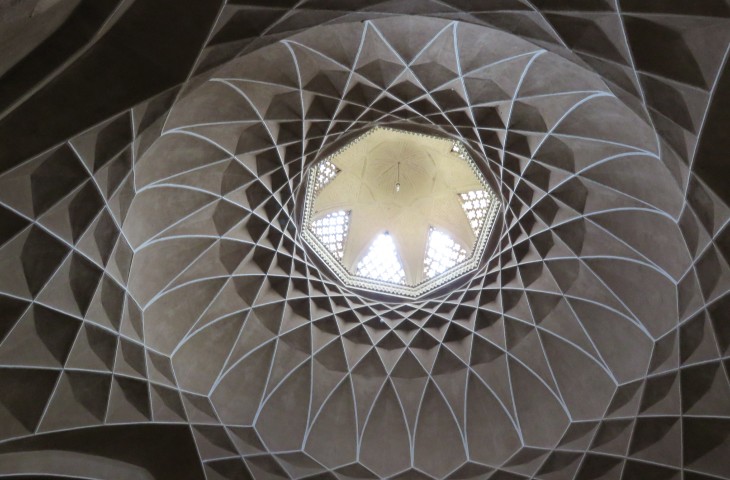 The gardens have the shape of a rectangle or of a square. Their four sides are believed to be a reference to the four Zoroastrian elements of sky, earth, water and plants or to derive from the Achaemenid emperors' tombs which point in four directions. Eight (twice four) is another number recurring at Bagh-e Dolatabad in the design of the main hall and in that of the badgir (and in general in many Islamic buildings, especially mausoleums). 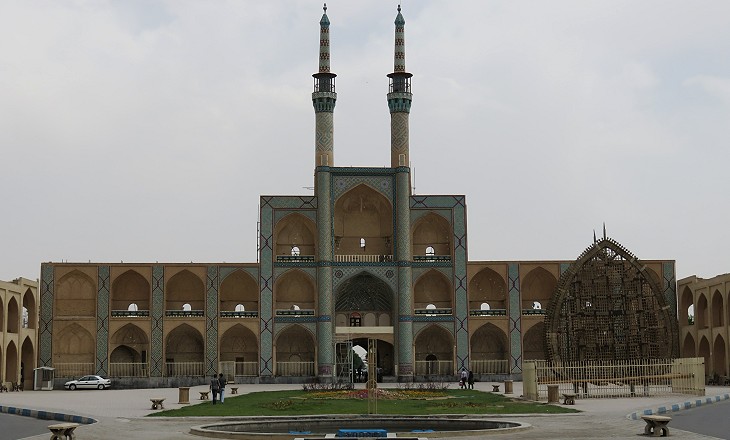 The most prominent monument of Yazd is a XIXth century addition to the Amir Chaqmaq complex. It is a sort of gigantic screen which closes a very large square. Its construction could have been originated by the desire to provide Yazd with a monumental central square, similar to Naqsh e-Jahan, the main square of Isfahan. Only the ground floor has rooms, the rest being just a series of balconies from which the inhabitants of Yazd could attend Ashura, the Shi'a commemoration of the death of Husayn ibn Ali at the battle of Kerbala in 680. The building is therefore named Hosseinieh or Takieh (commemoration). A gigantic nakhl stands next to it (you may wish to see an enlarged image of the nakhl - it opens in another window). A nakhl is a wooden structure carried in procession during Ashura, as the symbol of Husayn's coffin. It is typical of the region of Yazd. 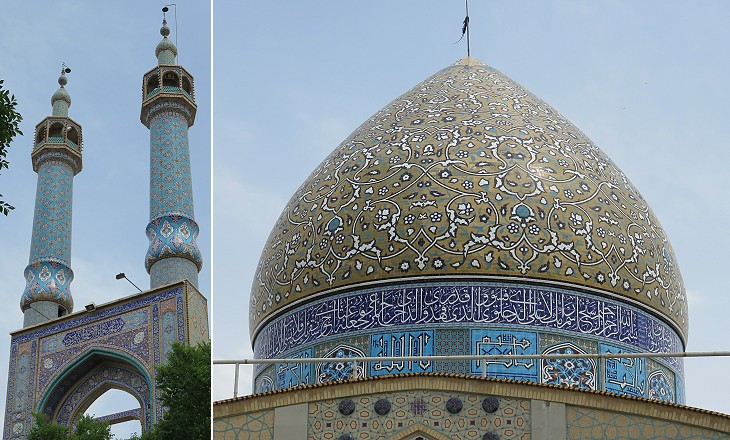 Yazd is unlike other Persian towns. No belt of gardens, no cool blue domes, defend it from the forbidding wastes outside. Town and desert are of one colour, one substance. Byron
Things have changed a bit in recent years and today Yazd has a number of domes which are carbon copies of those of Isfahan. That of Hazireh Mosque was decorated very similarly to that of Sheikh Lotfollah Mosque (in the icon of this section).