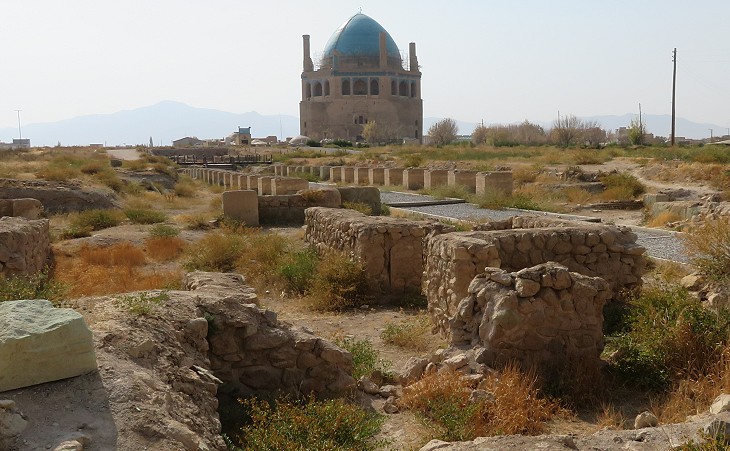 Mausoleum of Oljeitu from the walls of the town

This City is seated at the foot of a Mountain (..) It seems a far off very neat and well built, and inflames a Man with a Curiosity to see it: but when you approach near it, it ceases to be the same thing, and appears less beautiful then when we are within it. Yet there are some publick Buildings very remarkable, as well for the Structure as the Architecture, together with about three thousand Habitations. The people of the Country affirm, that this City took up formerly half a League of Ground more to the West then it does, and that the ruin'd Churches, Mosques and Towers, which are to be seen at that distance on that side, stood in the heart of the City.
The Travels of Sir John Chardin into Persia and the East Indies - 1686
(Travelling from Qazvin to Zanjan) after entering the plain, no more cultivation is to be seen until arriving at Sultanieh; all is one dreary and uninhabited expanse, only made use of for feeding sheep, several flocks of which were scattered about in different directions. Some snow was lying here and there in the corners of the ditches. Sultanieh is not seen until within four miles of the place, being situated rather low. The mosque, containing the tomb of Sultan Mohamed Khodabundeh (Servant of God, a pious name for Oljeitu, Ilkhanid Sultan in 1304-1316), forms a very conspicuous object, and rises high above the ruined huts with which it is surrounded.
William Richard Holmes - Sketches on the Shores of the Caspian - 1845 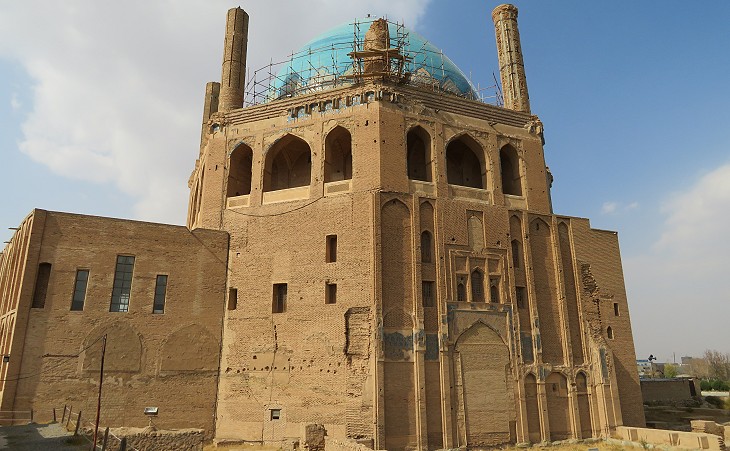 Mausoleum of Oljeitu: south-eastern view; on the left the rectangular hall above the sepulchral chamber; a view from the opposite side is shown in the introductory page

In conclusion I will say that the Mosque of Soltaniyeh is the finest building which I have seen insofar in Persia in all the cities and lands which I visited. I say "insofar" because I know, although I have not seen it yet, that there is a finer building which the Persians call the Forty Columns; it is not far away from Shiraz, on the site of ancient Persepolis.
Pietro Della Valle - Journeys in Turkey, Persia and India in 1614-1626
The principal object among the remains of the ancient town is an immense structure, which is called the tomb of Sultan Mohamed Khodabendeh, and is said to be six hundred years old. A cupola rests on an octagonal base, on each angle of which arose a minaret; one only of which is now entire. At each angle also was a staircase, and in each of the sides was a door. (..) The whole structure is of a fine brick, admirably put together. The cupola and minarets were covered with a green-lacquered tile, most of which is now pealed off. (..) The whole structure looks more like a mosque than a tomb, compared at least with those at Constantinople; but of any description, and in any place, I do not recollect a building which could have surpassed this in its original state.
James Justinian Morier - A Journey through Persia, Armenia, and Asia Minor, to Constantinople, in the years 1808 and 1809 - 1816 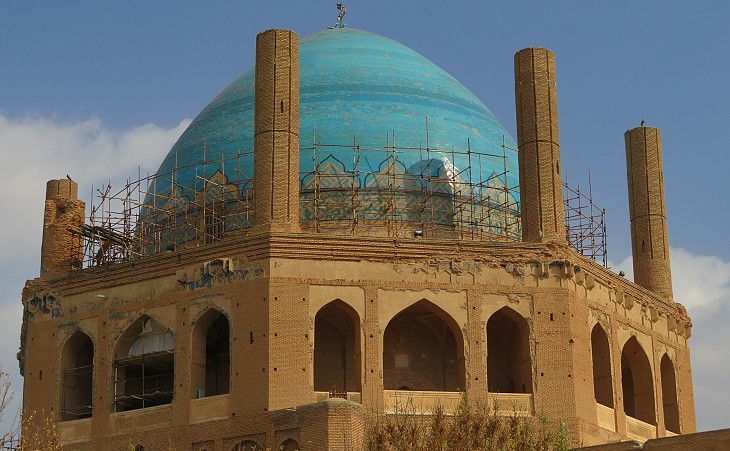 Mausoleum of Oljeitu: dome and minarets

Mile after mile we pursued a straight line between parallel ranges of mountains. The dome of Sultaniya loomed over the desert. (..) Most of the villagers spoke Turkish. (..) This remarkable building was finished by the Mongol prince Uljaitu in 1313. An egg-shaped dome about 100 feet high rests on a tall octagon, and is enclosed by a stockade of eight minarets which stand on the parapet of the octagon at the corners. The brick is pinkish. But the minarets were originally turquoise, and trefoils of the same colour, outlined in lapis, glitter round the base of the dome. Against the flat desert, pressed about by mud hovels, this gigantic memorial of the Mongol Empire bears witness to that Central Asian virility which produced, under the Seljuks, Mongols, and Timurids, the happiest inspirations of Persian architecture. Certainly, this is façade architecture. (..) But it has the audacity of true invention; the graces are sacrificed to the idea, and the result, imperfect as it may be, represents the triumph of the idea over technical limitations. Much great architecture is of this kind. One thinks of Brunelleschi. (..) A last visit to Uljaitu's mausoleum. It was the first great monument I saw in Persia, but I had no standard of comparison then, and I was afraid it might disappoint me now. It does not.
Robert Byron - The Road to Oxiana - Macmillan 1937 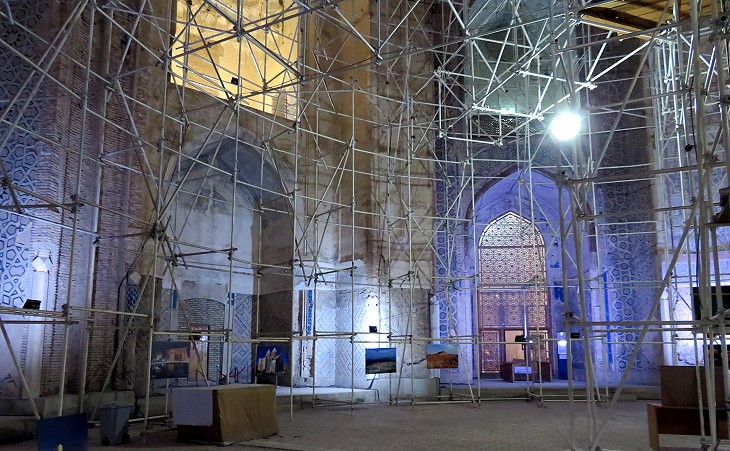 The interior is still admirable, though it is now converted into a magazine of straw. Nothing, however, intersects the beautiful symmetry of the dome. The interior diameter is thirty-five paces, and on a rough calculation, the height of the dome must be about one hundred feet. In the centre of the floor, among the straw, is a pillar of white marble, probably belonging to the tomb of the king, which is said indeed to be immediately in that position below the surface. The people told me that there were many fine marbles under the straw; I saw (without being able to find any descent to them) several arches under ground, which support the whole floor. Morier
In Soltaniyeh, which was briefly the capital of Persia's Ilkhanid dynasty, stands the Mausoleum of Oljaytu, its stunning dome covered with turquoise-blue faience tiles. The tomb is the main feature remaining from the ancient city; today, it dominates a rural settlement. (..) The Mausoleum of Oljaytu is recognized as the architectural masterpiece of its period and an outstanding achievement in the development of Persian architecture, particularly in its innovative double-shelled dome and interior decoration.
From the UNESCO synthesis of the universal value of Soltaniyeh which in 2005 was included in the World Heritage List. 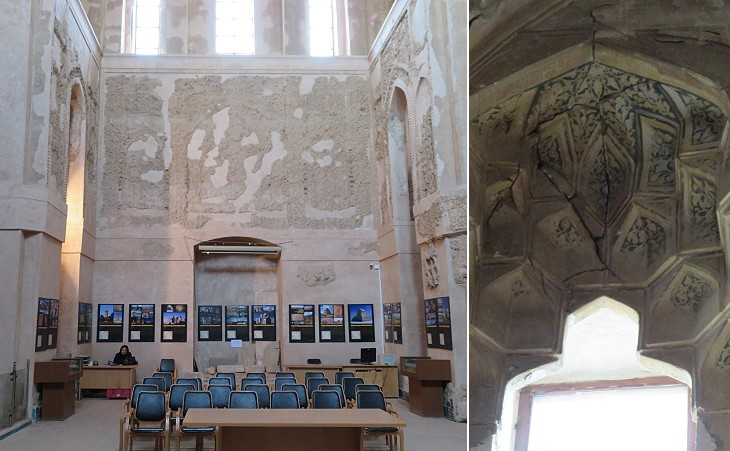 Mausoleum of Oljeitu: (left) rectangular hall above the sepulchral chamber; it houses a small museum; (right) decoration of one of its windows

We paid a visit to the mosque immediately on our arrival, and were shown over it by an old Seyyid (a courtesy title) who spoke Persian. (..) From one side of the octagon (that farthest from the road) is thrown out a rectangular annexe containing the mihrab. The main entrance is on the east side. As the mosque is no longer used, the European traveller meets with none of the difficulties which usually form an insuperable obstacle to visiting similar buildings in Persia. (..) Our guide informed us that some time ago a European engineer had spent a week at this place, making elaborate plans and drawings of the mosque.
Edward Granville Brown - A Year amongst the Persians - 1893 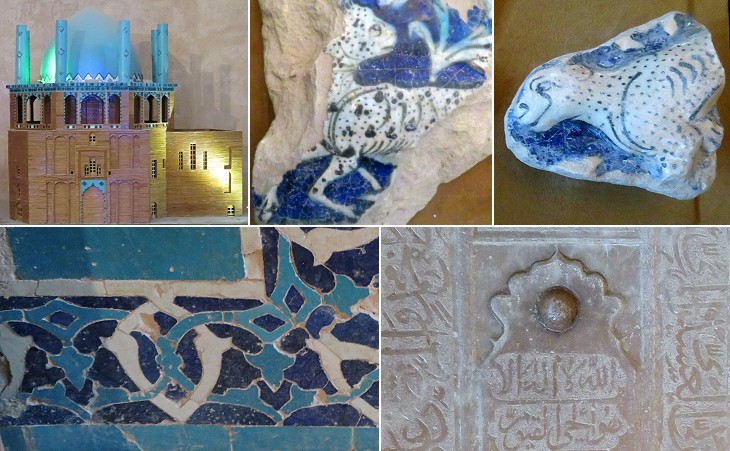 Mausoleum of Oljeitu: exhibits at its small museum including a model of the building, fragments of its glazed tile decoration and an alabaster tombstone

The interior and exterior are covered with glazed tiles, the dome being one continuous surface of blue tiles, resplendent from afar. The pillars are of variegated colors, worked in patterns. The interior workmanship is to a considerable extent a mosaic of gilded tiles. (..) We secured several tiles which had fallen.
Samuel Graham Wilson - Persian Life and Customs - 1895 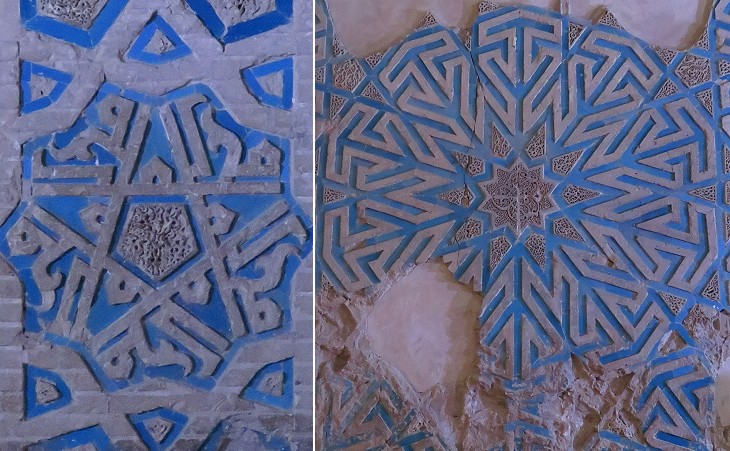 Mausoleum of Oljeitu: geometric decoration based on polygons which will become a feature of Persian architecture (see the XVth century Blue Mosque of Tabriz and the XVIth century Kalon Mosque of Bukhara)

The extremely rich interior of the mausoleum, which includes glazed tiles, brickwork, marquetry or designs in inlaid materials, stucco, and frescoes, illustrates an important movement towards more elaborate materials and themes. (..) The monument is authentic in terms of its form and design, materials and substance, and location and setting. Restoration work has carefully respected the authenticity of the monument, utilizing traditional technology and materials in harmony with the ensemble. (..) The exterior decorations of the mausoleum have suffered severe decline, which has affected its integrity. Nevertheless, the internal decorations have remained intact to a large degree. UNESCO 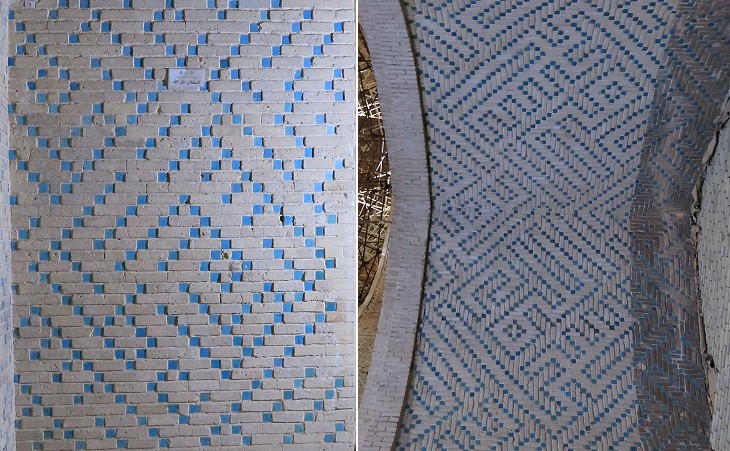 Mausoleum of Oljeitu: decoration based on Kufic inscriptions

The interior of the building is lined with most exquisite tile-work, and beautiful inscriptions in Arabic. In some places, where these tiles have been destroyed or removed, an older, deeper layer of still finer pattern is visible. Granville Brown
The building was initially meant as a mausoleum for Imam Ali and Imam Husayn (the first and the third of the Twelve Imams who are regarded as the successors of the Prophet by the Shiites) whose remains Oljeitu planned to transfer from their resting places at Najaf and Kerbala in Iraq. This decision met with hostility from some religious leaders and eventually Oljeitu decided that the building would have been his own mausoleum. Two phases of interior decoration may also reflect the change in purpose of this structure. The earlier decoration, intended for a religious monument, made extensive use of brick and of Kufic inscriptions praising God which were formed with tiny turquoise glazed squares. This maze-like type of inscriptions will later on be utilized in Timurid and Safavid monuments. 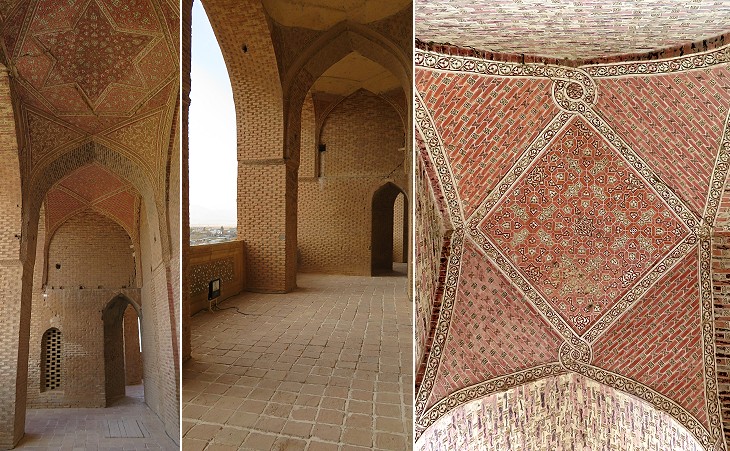 Mausoleum of Oljeitu: external gallery; another detail of its decoration is shown in the image used as background for this page

Over each gate is a gallery, which extends along the base of the dome, and leads into smaller galleries within, and into others also on the exterior of the building. These are beautifully adorned with the neatest work that I had ever seen; all the cornices of the doors, the segments of the arches, and the various niches are covered with Arabic sentences; which in some places are surmounted in a smaller character by Cufic inscriptions, all either painted in fresco, or raised in plaster. Morier 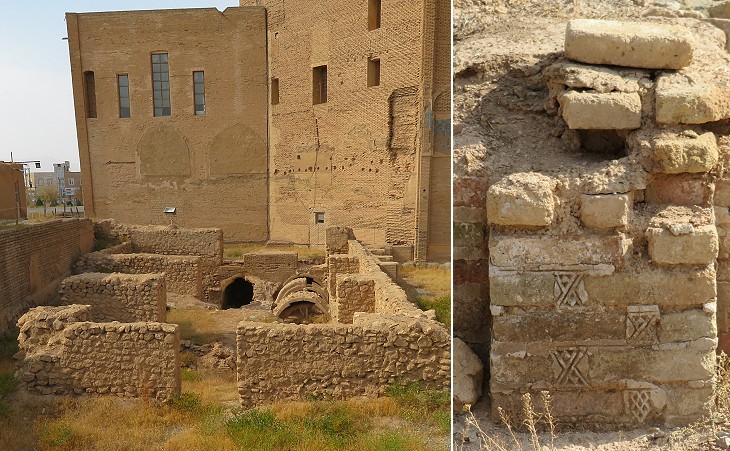 The principal gate fronted the east; it is now in part remaining, but in a short time will be entirely demolished; as during our visit there were many workmen employed in pulling it down, to use the materials in some of the king's pleasure-houses. Morier
Excavations carried out in the 790-ha Mausoleum of Oljaytu property have revealed additional vestiges of the old city, and a large part of this property has retained its archaeological character. UNESCO
The overall design and decoration of the mausoleum which was preceded by a monumental entrance provided a model for Timur's own mausoleum at Samarcand. 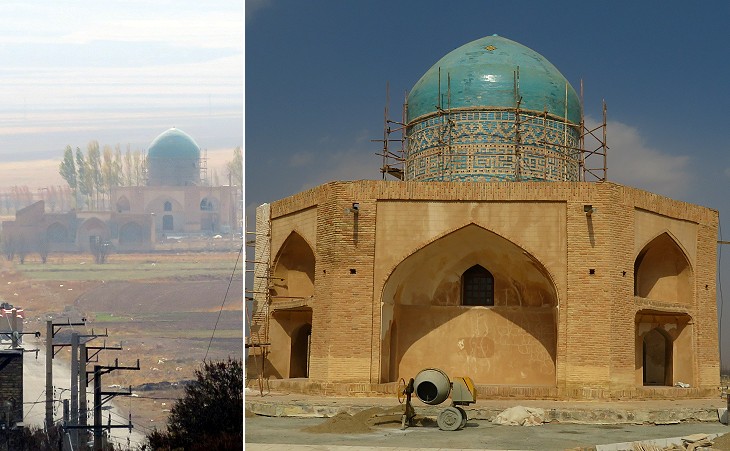 Mausoleum of Mullah Hasan Kashi: (left) from the Mausoleum of Oljeitu; (right) at close range

There are two smaller monuments not far away, an octagonal tomb-tower of the thirteenth century known as that of Sultan Cheilabi, and an octagonal shrine, squatter and later, which shelters the grave of Mullah Hassan. (..) The second is remarkable for a domed stalactite ceiling painted red and white (a XIXth century decoration). A narrow path led to the later shrine through a brown and thorny scrub. "What a pity you can't come back in summer," said the peasant with me wistfully. "The rose-avenue is so beautiful then". Byron. See some Persian roses. 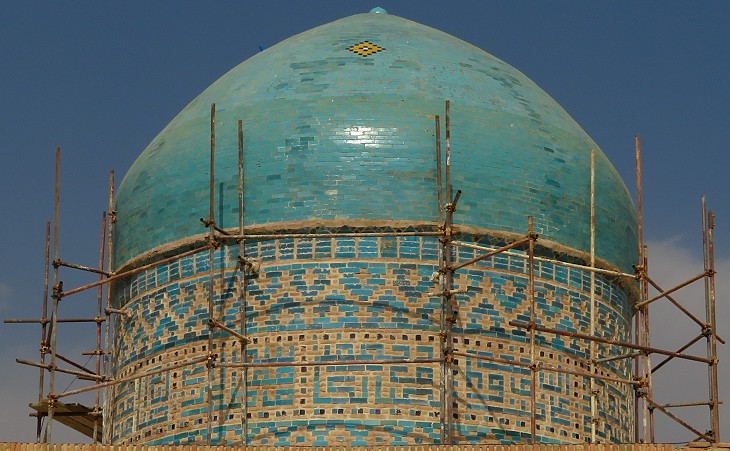 Dome of the Mausoleum of Mullah Hasan Kashi

The mausoleum was built by Tahmasp I, Safavid Shah of Persia in 1524-1576, to honour a XIVth century mystic and poet. 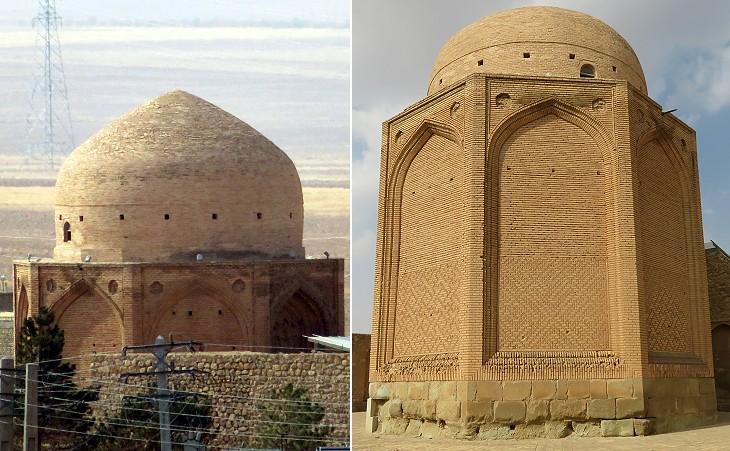 Mausoleum of Boq'eh Chelabi-Oglu: (left) the building; (right) its brickwork with Kufic inscriptions

The brickwork of the first, still pointed as though built yesterday, excels the best work of those masters of European brick, the Dutch. Byron
The mausoleum was built by a courtier of Oljeitu, who was in charge of developing a neighbourhood of the town. The suffix oglu in Turkish means son of.