Baku: The New Town
(IIIrd millennium BC stone relief at the Azerbaijan Museum of Tabriz)

You may wish to see an introductory page to this section or a page on the Old Town first. 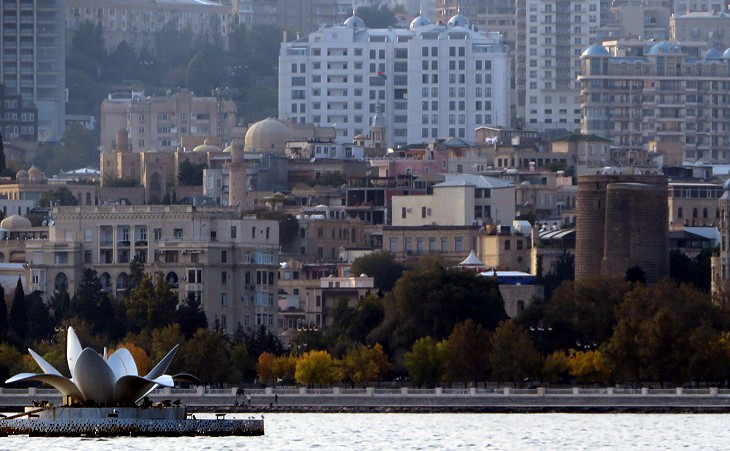 Baku with its mix of old an modern buildings, seen from a boat making a tour of the harbour

So at last I was really to go to Persia. (..) We had booked our passage (..) to Batoum, intending to take the train thence to Baku, and so by the Caspian to Resht in Persia. For this route, unquestionably the shortest and easiest, I had from the first felt little liking, my own wish being to enter Persia through Turkey. (..) (On the return trip) I woke about 6.30 a.m. to find myself at Baku. Somehow or other I escaped the ordeal of the Custom-house; for, intending at first to breakfast on board, I did not disembark with the other passengers, and when afterwards, changing my mind, I went on shore, about 9.30 a.m., the pier was free of excisemen, and I had nothing to do but step into a cab and drive to the station, stopping on the way at a Persian money-changer's to convert the remainder of my Persian money into rouble notes. The train did not start till 2.37 p.m., so I had some time to wait at the station, where I had lunch.
Edward Granville Brown - A Year amongst the Persians - 1893
Baku Four P.M., arrived at Baku; went on shore, bought photos of Russian types of Baku, etc., changed all my Persian money into paper roubles. (..) There is nothing to see.
Charles James Wills - In the Land of the Lion and Sun - 1883
In 1883 a railway linking Batumi on the Black Sea with Baku on the Caspian Sea was completed. This railway opened a new route to Persia for European travellers who could reach Batumi by steamer, travel by rail to Baku and board another steamer for to Persia. They followed the same route to return to Europe. They did not spend much time at Baku. 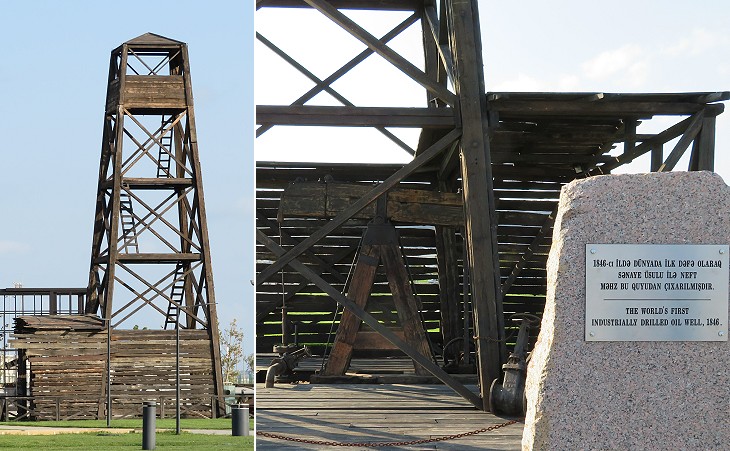 I will not describe the eternal fires, described so often by other visitors, nor tell how naphtha was tapped for the first time at this place, and how in 1886 one particular well spouted oil with such tremendous force that it was impossible to check it and it deluged a good portion of the neighbourhood. A year later, in 1887, another fountain rose to a height of 350 ft. There are myriads of other lesser fountains and wells, each covered by a wooden shed like a slender pyramid, and it is a common occurrence to see a big spout of naphtha rising outside and high above the top of the wooden shed, now from one well, now from another.
A. Henry Savage Landor - Across Coveted Lands - 1902
In 1846 the first oil well was drilled. But it was only in the last thirty years of the century that the rapid expansion of drilling, refining, and shipping of oil products helped create an upper class of oil industrialists. Foreign entrepreneurs like Ludwig and Robert Nobel, brothers of Alfred Nobel, made Baku the world's leading producer of oil by the beginning of the XXth century. 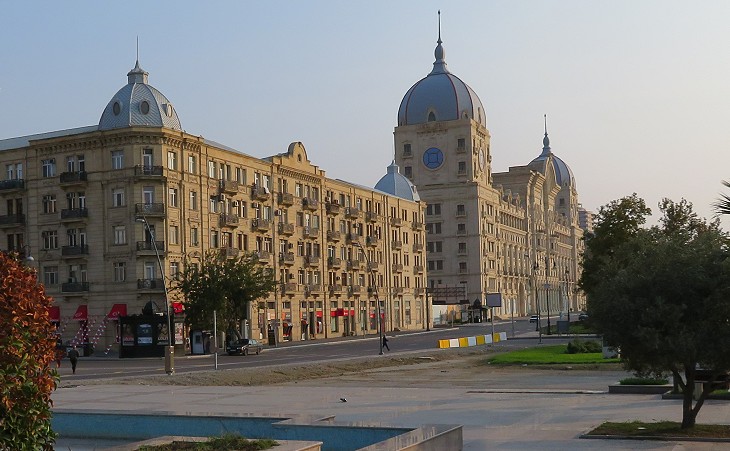 Nizami Ganjavi (a XIIth century poet, see his statue at Villa Borghese) Kucasi (Street) in the centre of the town

There is much business, principally in naphtha (Baku, owing to this, has in twenty years risen from nothing). There is a good natural harbour, lots of Russian officers about; Armenians, Persians, Lesghians (from a region north of Baku), more numerous than the actual Russians. Deep water full of fine fish close in shore. (..) Sudden rush of the beauty and fashion of Baku to breakfast on board; it appears that doing this, and the club, are the two amusements of the place. The naphtha trade and the steamer depot, with the garrison, form the society of this place. Festive Russia drinks bad champagne, at one pound a bottle, after breakfast. Wills
The New Town was developed in the second half of the XIXth century outside the walls of the Old Town; it had large boulevards flanked by large buildings in a mix of styles, all very European, in the sense that they had nothing to do with the local traditional architecture. 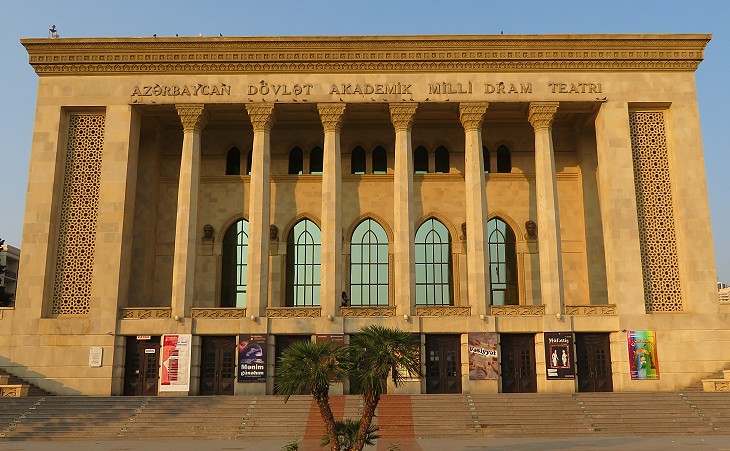 During the Communist regime (1920-1991) some local architects managed to design buildings which underlined the historical links of Baku with Persia. The slender columns of the Drama Theatre recall those of the royal palaces of Isfahan. 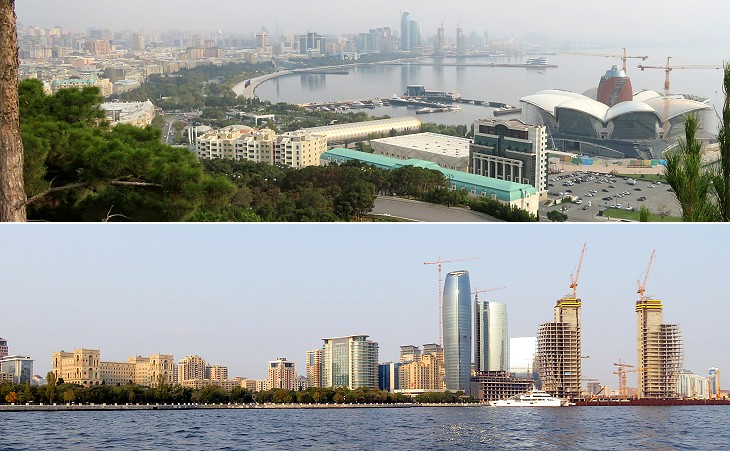 (above) The harbour of Baku from the mountain of the Flame Towers (which you can see in the image used as background for his page); (below) the new seafront from a boat making a tour of the harbour

There is an air of prosperity about the place and people that is distinctly pleasing, even although one may not share in it. There is quite a fair foreign community of business people, and their activity is very praiseworthy. The people are very hospitable - too hospitable. When they do not talk of naphtha, they drink sweet champagne in unlimited quantities. But what else could they do? Everything is naphtha here, everything smells of naphtha, the steamers, the railway engines are run with naphtha. The streets are greasy with naphtha. Savage Landor
This paragraph was written in 1902, but it makes even more sense today, including the smell of oil. Azerbaijan, a totally independent nation since 1991, owing to its oil and natural gas reserves, is a very rich country and the skyline of Baku shows it. 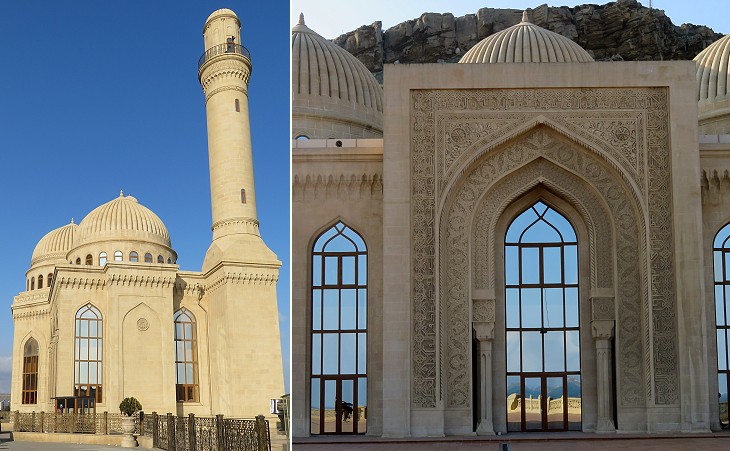 The construction of this large mosque on a terrace with a commanding view over the harbour was decided in 1994 as a reparation to the religious feelings of the population, because it stands in the place of a XIIIth century mausoleum which was demolished in 1936 by order of Stalin. It was built to house the body of Okuma Khanim, sister of the seventh Shiite Imam. It was called Bibi-Heybat because in those days it was not proper to call a woman by her first name. Okuma Khanim had a devoted servant named Heybat. In Azeri bibi means aunt, so Bibi-Heybat was an indirect way of saying Okuma Khanim. 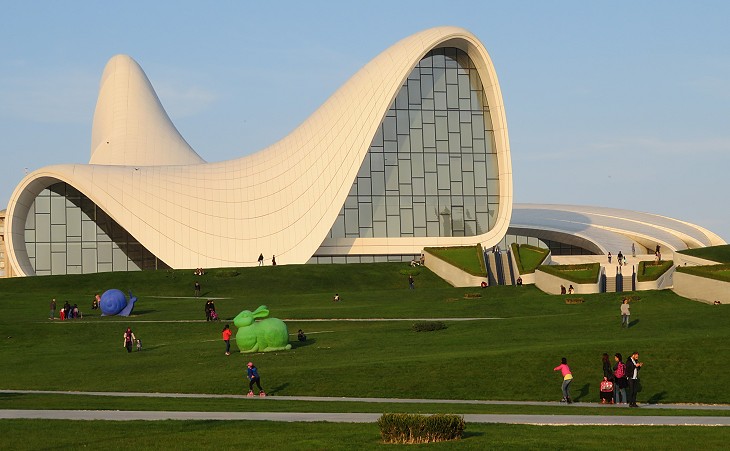 The purpose of the Heydar Aliyev Centre is to promote cultural activities by housing conferences and permanent and temporary exhibitions. The design of the building has earned several international awards. 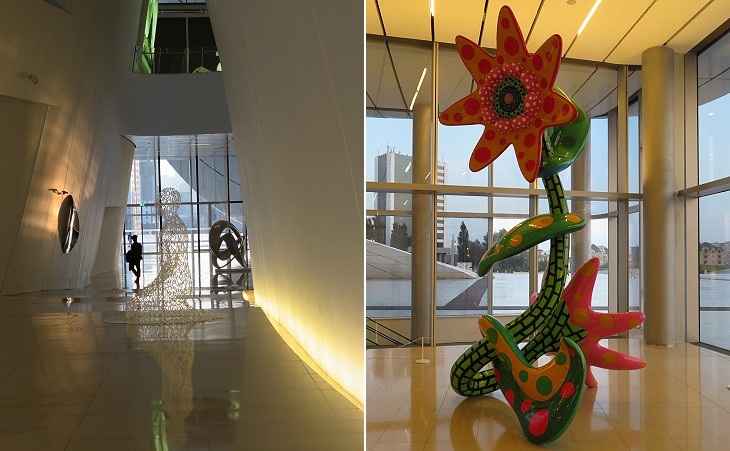 Heydar Aliyev was First Secretary of the Central Committee of the Azerbaijan Communist Party in 1969-1987 and President of Independent Azerbaijan from 1993 to 2003. He was succeeded by his son Ilham. 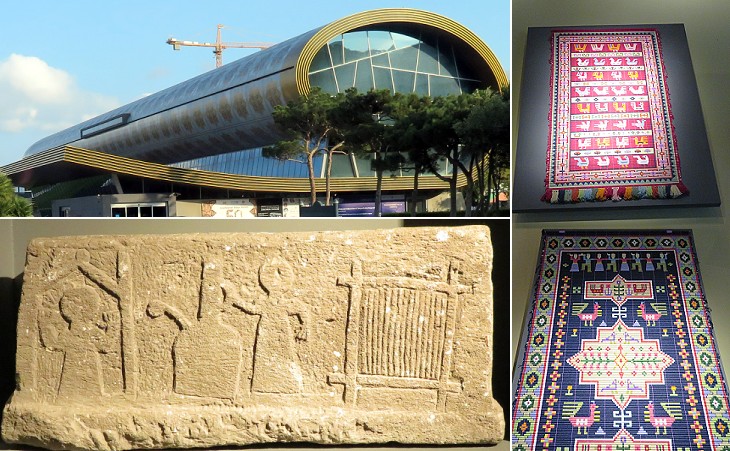 The Heydar Aliyev Centre could be anywhere in the world. Austrian architect Franz Janz thought to give a local touch to his building by making it look like a rolled carpet. The exhibits, in general carpets of the XIXth and XXth centuries, are very well displayed. The size and inner decoration of the building show how much money is available to the Azerbaijan government. 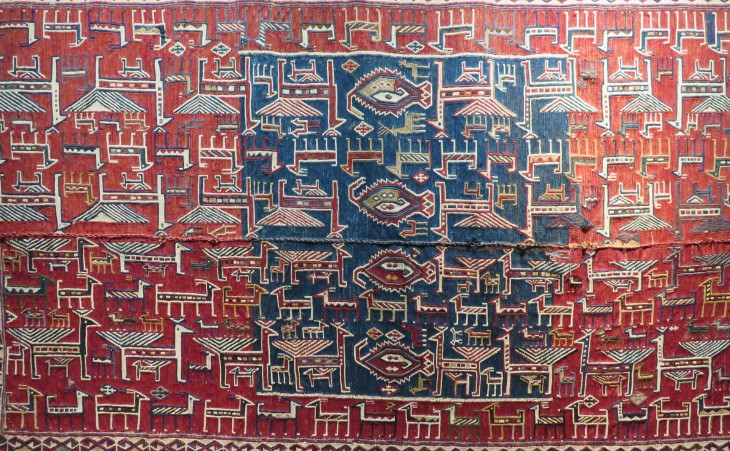 Return to the Old Town.