You may wish to see an introductory page to this section or pages on the town first. 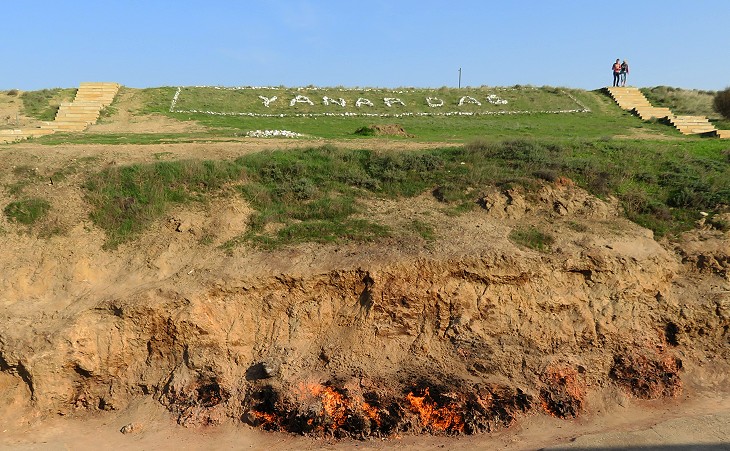 Baku has for ages past been celebrated in the Eastern World for that which every one in the town who can speak three words of French calls Le Feu Eternel. (..) For unnumbered ages, the gas which is generated by this subterranean store of oil (..) has escaped through long-established and inaccessible fissures in the limestone crag of which the hills in the neighborhood are composed, and the fire of this gas has lighted the prayers of generations of priests, as it blazed and flared away to the heavens.
Arthur Arnold - Through Persia by Caravan - 1877
The most salient instance in Zoroastrianism is the profound reverence paid to fire; for this feeling was almost certainly intensified by the fact that the Aryans in the country to the west of the Caspian Sea found it springing out of the ground and revered by the surrounding populations. I shall never forget my visit to see this phenomenon near Baku. I arrived at the place at sunset to find it covered with snow, and yet flames were springing out of the ground, the whole scene being impressive and weird beyond description. Thus the nature of the country positively suggested the institution of sacred fires, and one cannot but feel that it was not unfitting to regard this pure element as a symbol of the Creator of the world. No doubt, as time went by, the reverence paid to it became excessive, so that the title "Fire-Worshippers" was applied to the Zoroastrians.
Sir Percy Molesworth Sykes - A History of Persia - 1915 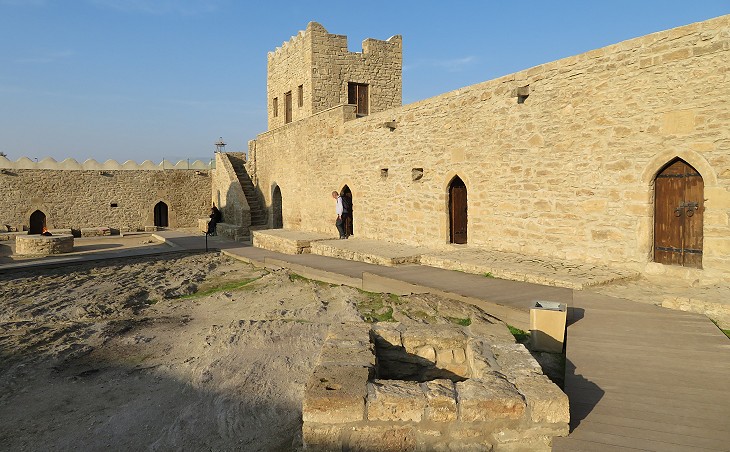 Temple of Fire at Surakhani, 30 km north-east of Baku

We read of Zoroastrians who fled to remote Kuhistan, the central portion of modern Khorasan, and of some who even emigrated by way of Hormuz to India. But the emigrants were few in number, and from references which abound in the Arab chroniclers it is clear that fire temples and Zoroastrian communities existed in many parts of Persia until comparatively recent times. Sykes
The temple was founded in the XVIIIth century (perhaps 1745) by Indian merchants and craftsmen who lived at Baku. It has always been associated with Zoroastrian ceremonies, but inscriptions and the layout of the temple seem to indicate it was a Hindu place of worship, although during the XIXth century it was visited by pilgrims from the Zoroastrian community in India. 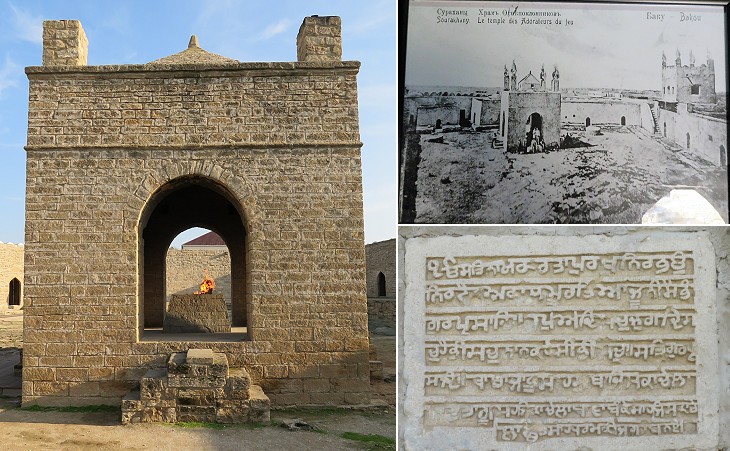 Temple of Fire at Surakhani: (left) altar; (right-above) XIXth century postcard; (right-below) Sanskrit inscription in the inner side of the entrance

We came to one of the oldest altars in the world, erect and flaming with its natural burnt-offering to this day. Surakhani is an ancient seat of probably one of the most ancient forms of worship. (..) For long, long ages, the worship of these flaming issues of petroleum gas at Surakhani has been maintained by delegations of priests from India, who have died and been buried upon the spot, to be succeeded by other devotees from the same country. (..) We thought that never, perhaps, had we seen a man more to be pitied than the "poor Indian", who is the successor of a long line of religiously appointed guardians of this once wholly sacred spot. (..) Before us stood the priest of a very venerable religion, which has always seemed to me to be one of the most noble and natural for a primitive people. There he stood, ready for half a ruble to perform the rites of his worn-out worship, and there also was the object of his life-long devotion set to work as economic firing. Arnold
For ages the gas arising there through the fissures in the rocks has fed the perpetual flame of the fire-worshipers, and an old priest still remains, a witness of modern industry.
Samuel Graham Wilson - Persian Life and Customs - 1895
The temple ceased to be a place of worship in 1883 when oil derricks were installed in its proximity. It became a tourist attraction where "ceremonies" were performed for a baksheesh. 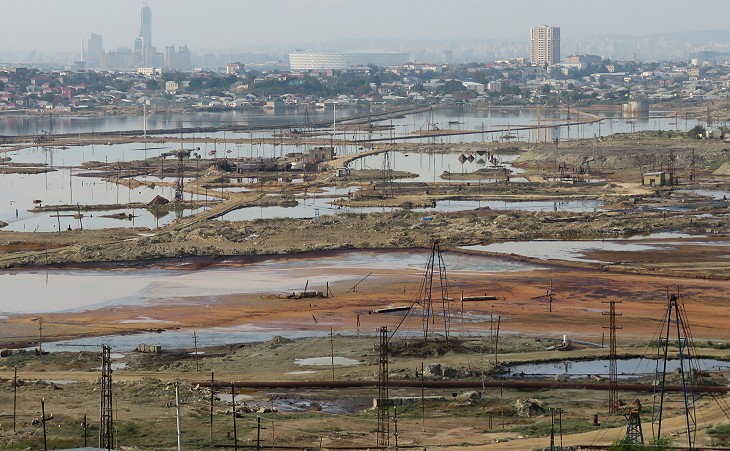 View over the oil fields north of Baku from Ramana Castle

We set out to visit these mines of liquid wealth in a dust-storm, with horses so active that we might suppose they too were fed with naphtha. In the outskirts of Baku (..) the country is all dust and desolation - a desert in which every one with an original turn of mind may make his own road. There is not a tree or shrub to be seen upon the arid hills and stony steppe, and the odor of naphtha is never out of the nostrils. Arnold
The greater number of wells are found a few miles out of the town, and the naphtha is carried into the Baku refineries by numerous pipe lines. The whole country round is, however, impregnated with oil, and even the sea in one or two bays near Baku is coated with inflammable stuff and can be ignited by throwing a lighted match upon it. At night this has a weird effect. (..) The terrific heat of Baku, the hot winds and sand-storms are deadly enemies to vegetation. Nothing will grow. One does not see a blade of grass nor a shrub anywhere except those few that are artificially brought up.
A. Henry Savage Landor - Across Coveted Lands - 1902

Derricks and pumpjacks; the latter are used after natural pressure is no longer sufficient to raise oil to the surface; other derricks can be seen in the XIXth century photograph used as background for this page

The exploiteurs were eager to show us the oil-wells, and hopeful, as they are much in want of capital, that we should send them some meek and moneyed Englishmen. (..) For two or three miles along the shore of the bay, the many buildings in which the petroleum is refined by itself as fuel pour forth dense smoke, and at eight miles from the town are the springs. The average depth at which the oil is touched seems to be about a hundred and fifty feet. (..) At the works of the Kalafy Company, an Armenian concern, when their well was first opened, the petroleum burst up in a fountain nine feet in diameter, a part of which rose forty feet in the air. Arnold
The process of bringing naphtha to the surface under ordinary circumstances is simple and effective, a metal cylinder is employed that has a valve at the lower end allowing the tube to fill while it descends, and closing automatically when the tube is full and is being raised above ground and emptied into pits provided for the purpose. The naphtha then undergoes the process of refinement. There are at the present moment hundreds of refineries in Baku. The residue and waste of naphtha are used as fuel, being very much cheaper than coal or wood. Savage Landor
The view of the oil fields is still very impressive. In the 1990s I attended in a junior role a meeting with a very top manager of the oil corporation for which I worked. He was in Rome on his way back from Baku to Dallas; he described the landscape around Baku with the same enthusiasm I would use for a view of Rome. 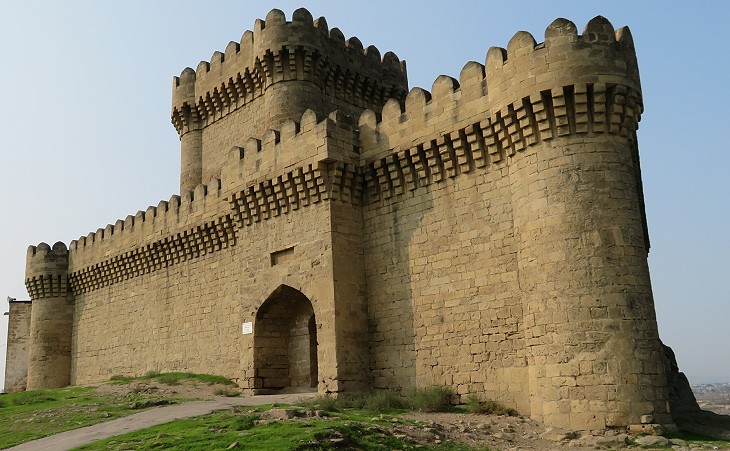 In 2001 Azerbaijan submitted a proposal for inclusion in the World Heritage List of The Caspian Shore Defensive Constructions, a number of fortresses in the north of the country. In particular the proposal made reference to four castles which protected Baku. Their purpose, in addition to checking the advance of enemy armies by land, was also to foil Cossack surprise raids by ship. The Cossacks lived in the steppe north of the Caucasus Mountains between the Don and the Volga Rivers. They were nominally under the suzerainty of the Russian Czar. In 1668 Stenka Razin, a Cossack leader raided Baku and other towns on the southern shore of the Caspian Sea.
Ramana Castle is the fortress nearest to Baku on a hill with a commanding view over the oil fields. Qala Castle at the eastern end of the Absheron Peninsula

The castles were initially built in ca 1000-1200, but they were strengthened in the XVI/XVIIth centuries. A creative restoration has deprived them of their historical evocativeness and today they do seem, in particular Qala Castle, to have been built for an amusement park. UNESCO did not endorse the proposal. 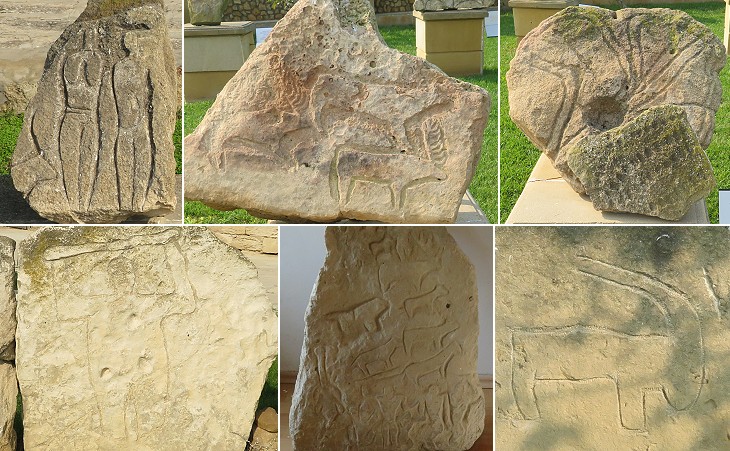 In 2008 an archaeological and ethnographic museum was opened near Qala Castle. It houses exhibits of very different periods from the Absheron Peninsula (and a small zoo). The archaeological section mainly consists of Stone Age rock carvings depicting human beings and animals. They are very similar to those found in the Qobustan region, south of Baku. 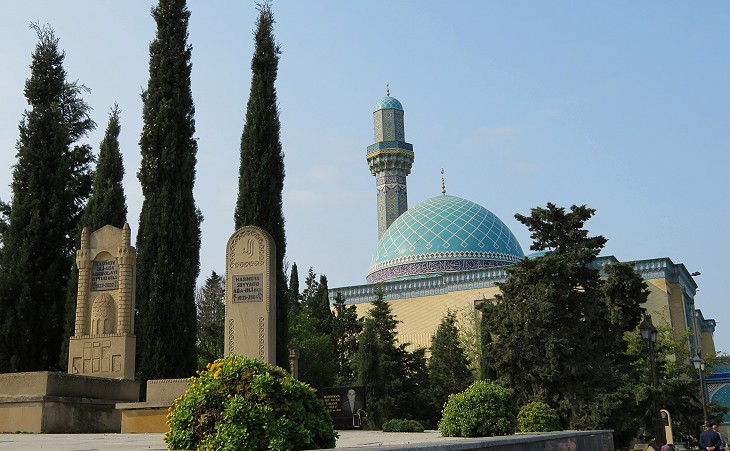 Notwithstanding the three centuries (1500-1806) during which Azerbaijan was a Persian possession there is not a single monument of the Old Town of Baku which can be associated with typical Persian architecture. This void was filled in 1994 by the construction of a large mausoleum for a local holy man who died in 1950. The glazed tile dome resembles that of Jameh Mosque of Qazvin and the minaret those of Shah Abbas Mosque at Isfahan.