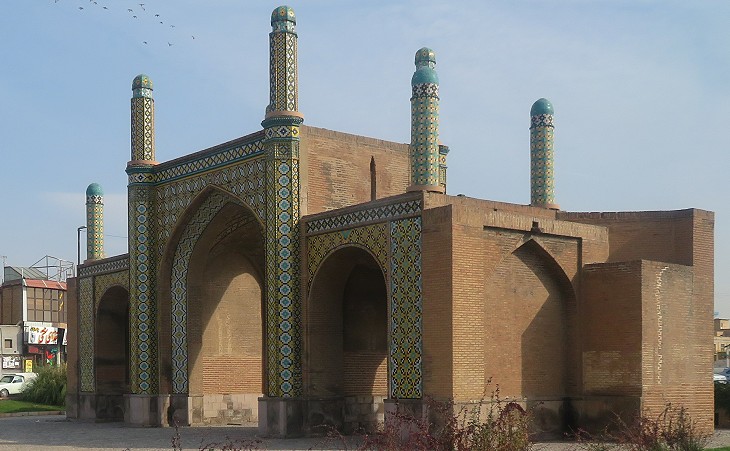 (After having visited Soltaniyeh) our horses were so tir'd that we could get no farther than Ebher near Casvin, where they begin to speak Persian, both in the Cities and Country: whereas all the way before the Vulgar Language is Turkish, not altogether as they speak it in Turkey, but with some little difference. From there to the Indies they speak Persian, more or less neat, as the people are more or less at a distance from Shiras, where the purity of the Persian Language is spoken.
The Travels of Sir John Chardin into Persia and the East Indies - 1686
Our path lay directly to Kasveen, or Casbeen, formerly one of the chief towns of Persia, a city which was famous in Milton's day, for the author of "Paradise Lost" wrote - "Bactrian Sophi (the Shah of Persia), from the horns Of Turkish crescent (the Ottomans), leaves all waste beyond The realm of Aladule (Armenia), in his retreat To Tabris or Casbeen."
Arthur Arnold - Through Persia by Caravan - 1877
In 1555 Shah Thamasp I moved the capital of the Safavid Empire from Tabriz to Qazvin, because the former was too close to the border with the Ottoman Empire. In 1598 Shah Abbas moved again the capital to Isfahan in Central Iran. The imposing gates and portals of Qazvin are reconstructions of the XIXth or XXth century. 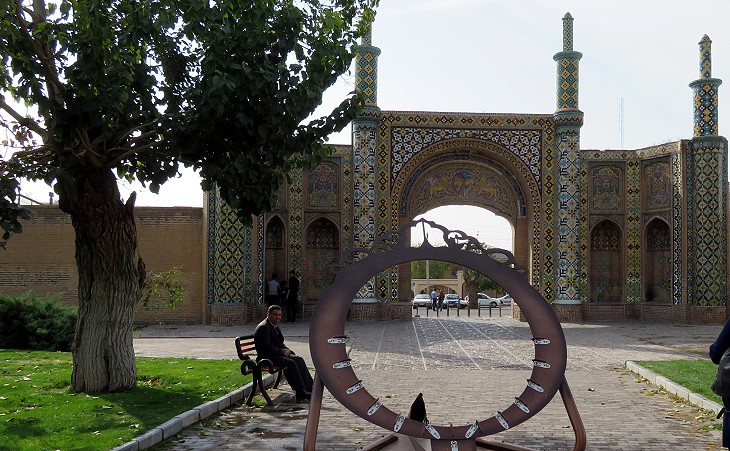 Casvin is a great City seated in a delightful Plain. (..) In former times it was surrounded with Walls, of which the Ruins are still to be seen, but at present it lies open on every side. Chardin
Here, indeed, a marked change was observable in the people, who appeared much brighter, more intelligent, and more amiable than the natives of Azarbaijan. The latter, with their scowling faces and furtive gray eyes, are not popular amongst the Persians, whose opinion about the inhabitants of their metropolis, Tabriz, is expressed in the following rhyme: "From a Tabrizi thou wilt see naught but rascality: Even this is best, that thou should not see a Tabrizi." The change in the appearance of the people is accompanied by a change in language, for this was the first place we came to at which the Persian tongue appeared to preponderate over the Turkish.
Edward Granville Brown - A Year amongst the Persians - 1893
The language divide between Turkish speaking Azerbaijan and Farsi speaking Central Iran (and most of Afghanistan and Tajikistan) is still noticeable today. While in general all inhabitants of Azerbaijan understand Farsi, they usually speak their Turkish dialect among themselves. 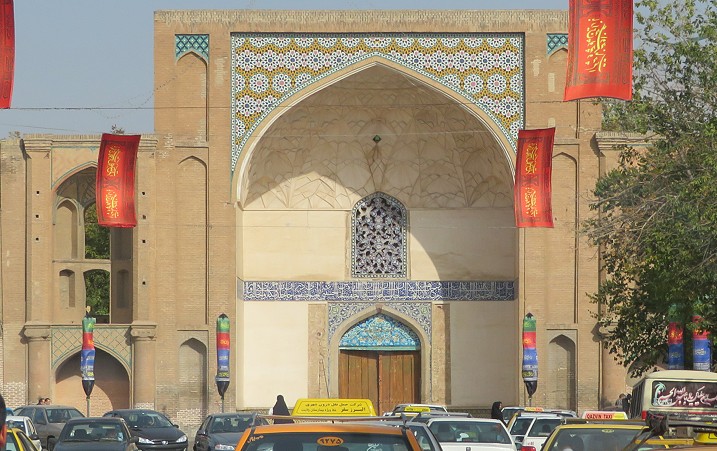 To the Royal Palace belong seven Gates, of which the chief is call'd Alt capi, or the High-Gate; on which there is an Inscription in Letters of Gold, to this effect. "May this Gate always be open to good Fortune; by that confession which we make, that there is no God but God." (..) King Tahmas, built this Palace, at first a small thing, according to a draught given him by a Turkish Architect. Abas the Great quite alter'd and enlarg'd it. Chardin
Casvin is almost one mass of ruins. A zibzileh (an earthquake), within no distant period, threw down the buildings and made cracks in almost every wall.
James Justinian Morier - A Journey through Persia, Armenia, and Asia Minor, to Constantinople, in the years 1808 and 1809 - 1816 Chehel Sotun (see a detail of its glazed tile decoration in the introductory page; the image used as background for this page shows a tile depicting a lion, the symbol of the Shahs of the Qajar dynasty in 1785-1925)

Chehel Sotun (Forty Columns) is with Ali Qapu the only remaining evidence of the palace which Shah Thamasp I built at Qazvin after he relocated there. The name of the building is the same as that of a royal pavilion at Isfahan, although actually it is more similar to Hasht Behest (Eight Paradises), another pavilion at Isfahan. 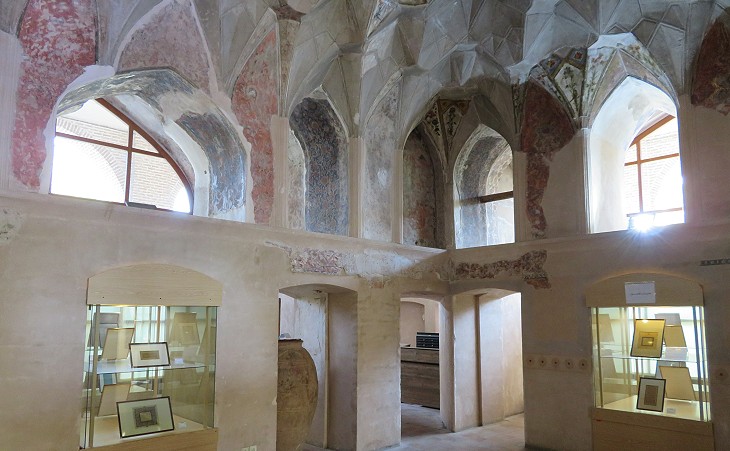 Chehel Sotun was radically altered in the Qajar period, but in the 1970s its interior was brought back as much as possible to its original appearance. The building consists of two stories and it currently houses a small museum. The rooms on the ground floor are vaulted and the restoration revealed parts of their original decoration. 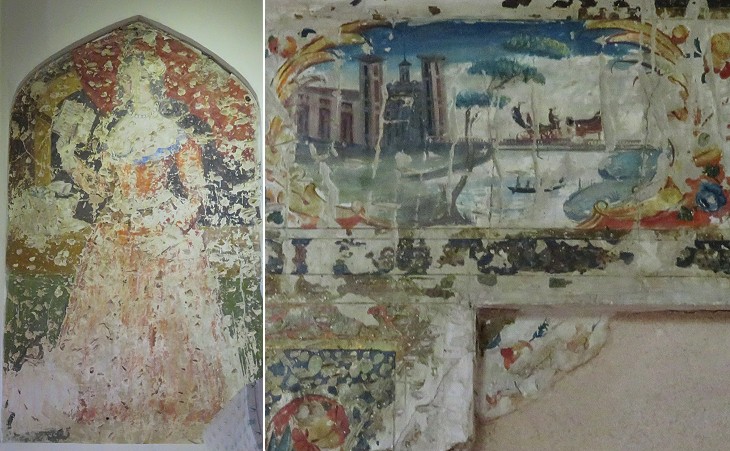 Restoration revealed also the remains of wall paintings on both levels. Upstairs there is a very lively representation of a harem girl wearing European dress in the style of the XVIIth century. These wall paintings are another point in common with Isfahan's Chehel Sotun where large paintings portray Safavid Shahs defeating their enemies or entertaining their guests. 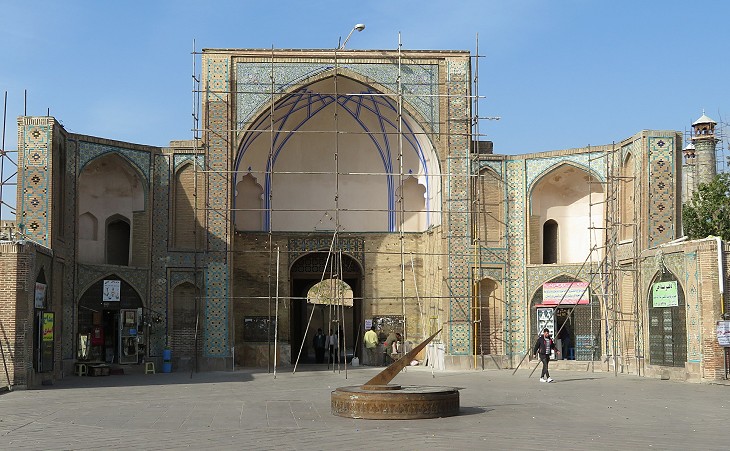 Entrance to the Jameh Mosque

There are but few Mosques at Casbin; The chiefest of which by them call'd Metshidguima or the Mosque of the Congregation, was founded by Haron-Reshid Califf of Bagdat, in the year of the Hegyra 170 (807). Chardin
The mosque was redesigned by the Seljuks and by the Safavids to whom it owes its glazed tiles. 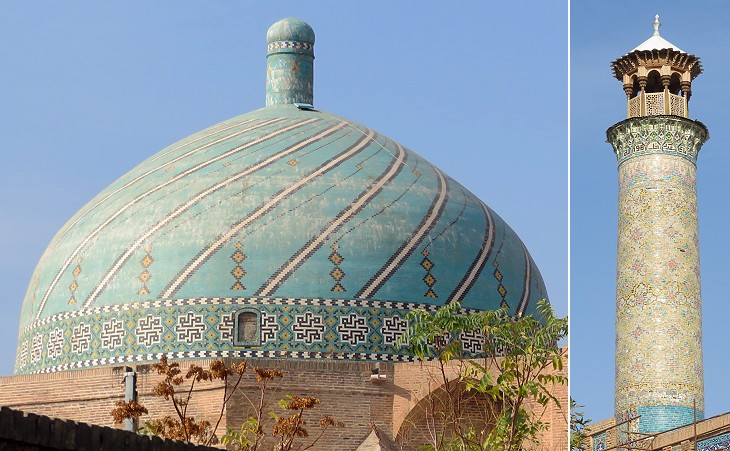 Jameh Mosque: (left) dome; (right) one of the minarets

There were two conspicuous mosques; one, called the Mesjid-i-Shah, built by Fathy Ali Shah (who ruled in 1797-1834); and another, of much older date, distinguished by a large dome and two minarets of glazed blue bricks, which are now partially destroyed. The dome was also formerly decorated in a similar manner, but all the tiles had fallen.
William Richard Holmes - Sketches on the Shores of the Caspian - 1845
One hears that Kasvin occupied at one time a larger area than Teheran to-day. The remains of this magnitude are certainly still there. The destruction of the city, they say, has been due to many and varied misfortunes. Earthquakes and famines in particular have played an important part in the history of Kasvin, and they account for the many streets and large buildings in ruins which one finds, such as the remains of the Palace and the domed mosque.
A. Henry Savage Landor - Across Coveted Lands - 1902 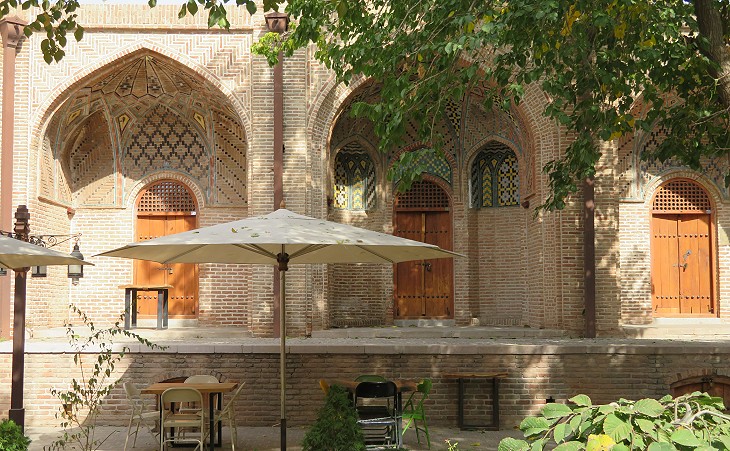 There are also several handsome buildings among the Caravanserais or Publick Inns. That which they call the Royal Inn, contains 250 Channels, has a large Fountaine planted with Trees, in the middle of the Court, and two Gates, which they lead in the Court from two streets full of shops where the most costly sort of Merchandises are sold. Chardin 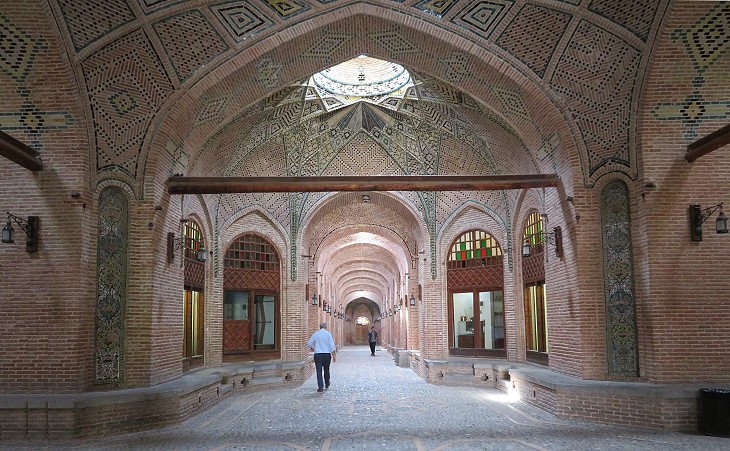 Restored section of the bazaar, very similar to that of Tabriz

We spent most of the following day in wandering through the bazaars and examining the appearance of the town and its inhabitants. The bazaars were much like those which we had already seen at Tabriz, and Zanjan; but as regards the people, the advantage was decidedly in favour of the Kazvinis, who are more pleasing in countenance, more gentle in manners, and rather darker in complexion than the Azarbaijanis. Granville Brown 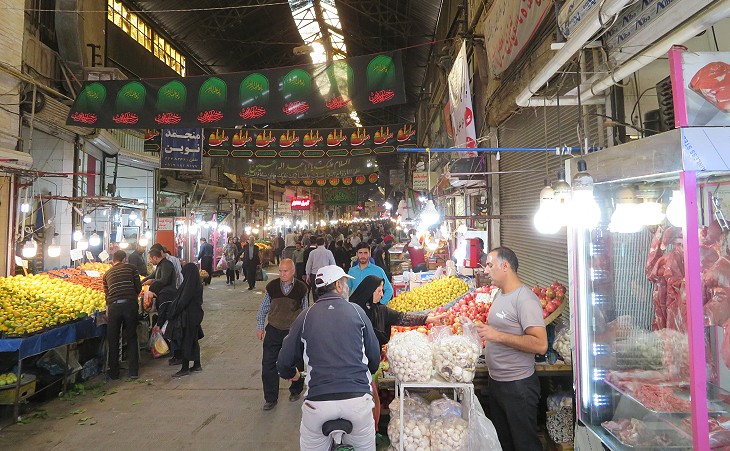 The bazars, through which I rode, are large and well supplied, and were filled with people. Holmes (in 1845)
Kasveen is a half-ruined, famine-stricken dust-heap. During the famine of 1870-71 the poor of Kasveen died by hundreds. (..) Kasveen suffered horribly in the recent famine, and this may account for some of the ruin which surrounded us. But the decay of Kasveen is of long standing, and will not, apparently, be arrested by the absence of famine. (..) We passed through a part of the bazaar, where, as in all towns in Persia, men may be seen ginning cotton with a bow, ignorant of the European inventions, and where others were laboriously embossing writing-paper by rubbing the rough sheet with polished wood. Arnold (in 1877)
Persia endured a severe economic and political decline during the XIXth century. 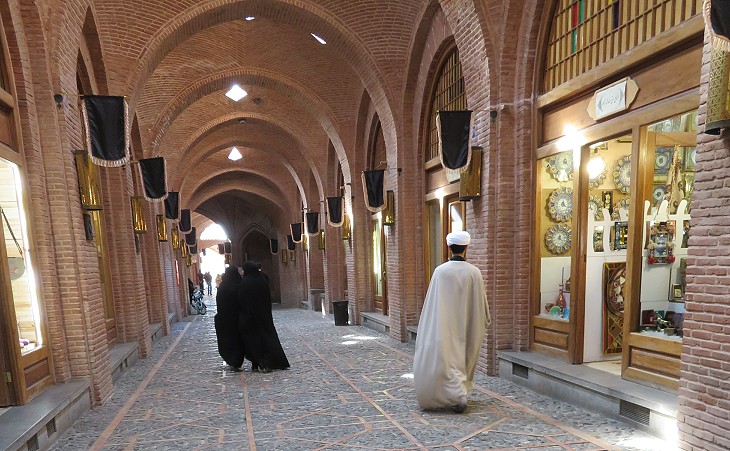 A rare sight at the bazaar 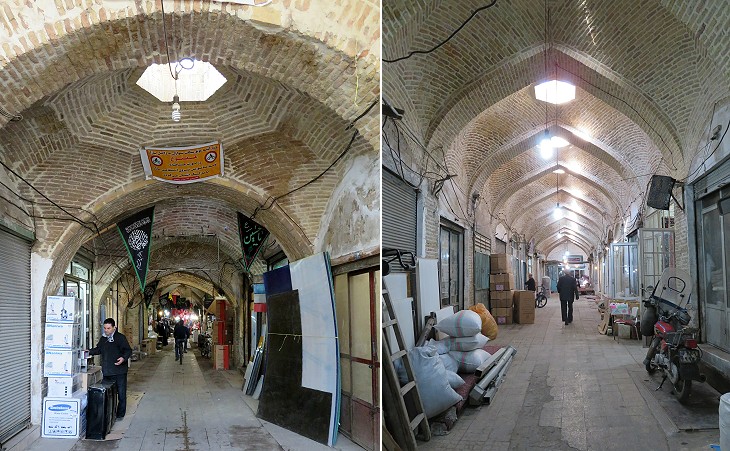 Views of the Bazaar

We remained a day, and found the city an active, busy place. Its bazaars were full of goods, and full of life as well. Zenjan is noted for its manufactures in brass (the town is still renowned for its knives). The sound of the furnace did not cease at night, and in the morning we awakened amid the din of a hundred anvils.
Samuel Graham Wilson - Persian Life and Customs - 1895
We alighted at a caravansaray near the bazaar, which we visited shortly after our arrival. It is not very extensive, being limited to one long street running east and west more than half through the town. (..) The great drawback to Zanjan is the enormous number of beggars who throng its streets and importune the traveller for alms. Granville Brown Pomegranates and grapes at the Bazaar