- Mardin
(Detail of a relief at Karatepe)

Jebel Mardin consists of a range of limestone hills, which terminates rather abruptly in the plain. On one of the boldest of these rocks Mardin is singularly perched, while beyond it, the precipices dwindle away, and are occupied by the monasteries attached to Der-i-Zaferan (Yellow Monastery).
William F. Ainsworth - Travels and Researches in Asia Minor, Mesopotamia, Chaldea, and Armenia - 1842

We reached the town of Maridin, a great city at the foot of a hill, one of the most beautiful, striking and substantially built cities in the lands of Islam. Here they manufacture the woollen fabrics known by its name. At Maridin there is a fortress of exceptional height, situated on the hilltop.
H. A. R. Gibb - Selection from the Travels of Ibn Battuta in 1325-1354
Mardin is located on the western slope of an isolated mountain which reaches an altitude of 1,300 meters/ 4,300 ft. The rocky peak of the mountain has attracted the attention of settlers since the earliest days of civilization; its cliffs made it a naturally fortified site. Due to its strategic position the control of Mardin was disputed between the Romans and the Parthians and later on between the Byzantines and the Sassanids. 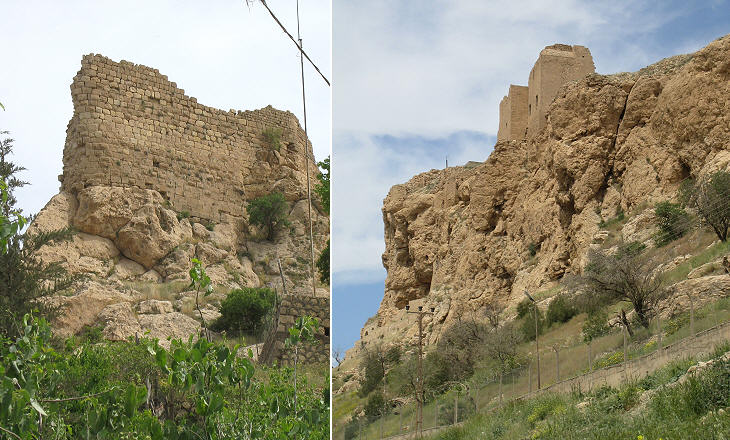 Details of the fortress

It is not easy to identify with precision the date of construction of the remaining bastions and towers of the citadel; they most likely belong to the periods during which Mardin was ruled by the Marwanids (XIth century) or by the Artukids (XIIth century) when the town was the capital or the second most important town of a small independent emirate.
The citadel was able to withstand very long sieges: a siege which lasted two years is recorded at the beginning of the XVth century and in 1516/1517 the Ottomans had to wait nine months before the garrison surrendered. 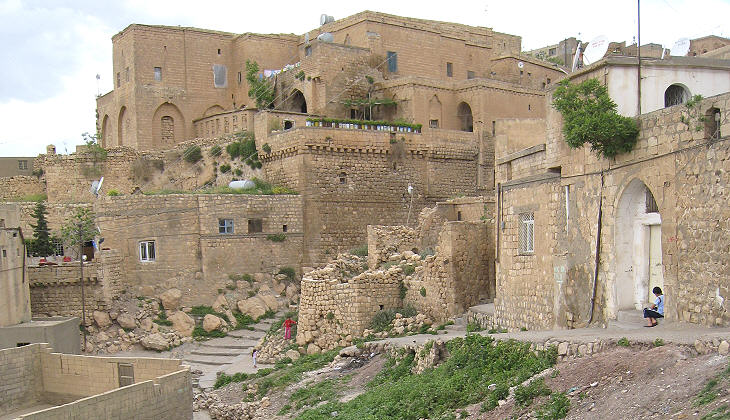 Walls in the lower part of the town

The side of Mardin towards the plain was protected by modest walls which had the main purpose of defining the boundaries of the town for the collection of duties. Short stretches of these walls have been incorporated into houses. 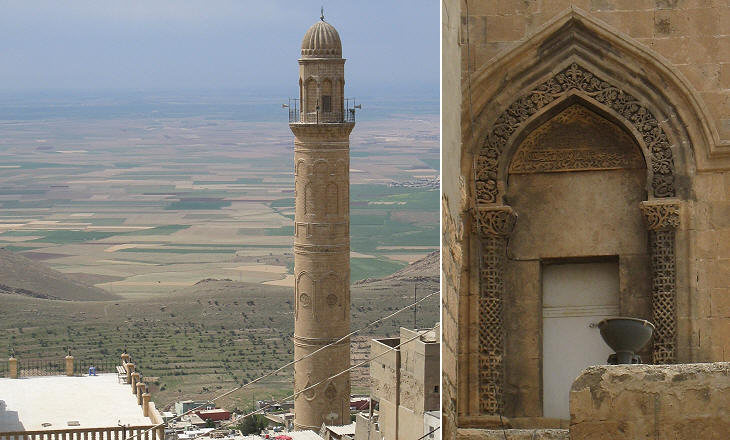 The prospect of Mardin is one of the most striking that can well be conceived, not only from the almost infinite extent of cultivated land that lies stretched out at its feet as on a map, from the numerous villages and hillocks with which they are studded and which dwindle away in the distance to mere mole-hills, but also from the vast and almost boundless expanse of nearly level ground unbroken by trees or rivers, for the most part sinking gradually from sight to the utmost verge of the horizon, where everything is indistinct, and which is here, from the great height at which the spectator is placed at a remote distance. Ainsworth
Mardin commands great views over the Mesopotamian plains even beyond the border between Turkey and Syria. The Great Mosque is the result of many changes made during its long history; inscriptions date its construction to the XIIth century during the Artukid period but only a few minor parts of the complex belong to that period; the minaret is mainly a XIXth century reconstruction of an earlier minaret which was very similar to that of Safa Cami in Diyarbakir. The base of the minaret however has not been modified: the columns and the decoration of the small portal are based on patterns of the Artukid Ulu Cami porticoes in Diyarbakir. 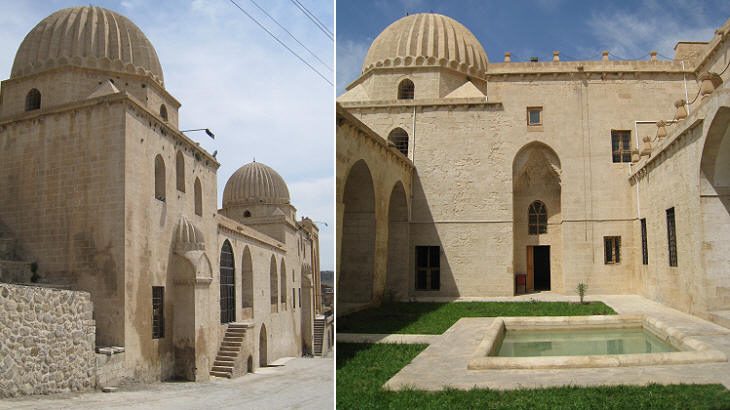 A characteristic of the monuments of Mardin is the presence of ribbed domes of Persian origin (which became very popular in Central Asia, e.g. at Samarkand). Sultan Isa Medresesi was built in 1385 by the Artukid rulers of the town; this dynasty was forced for more than a century to accept the overall sovereignty of the Mongols, but towards the end of the XIVth century managed to regain its independence. 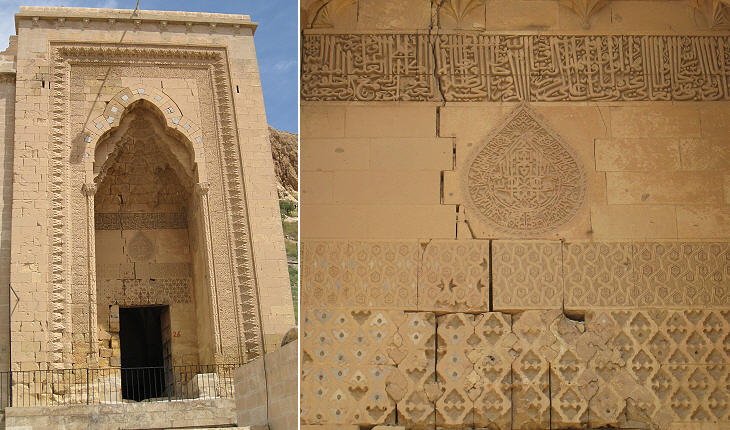 The construction of pishtaq, monumental portals, is typical of Persian Islamic art but it can be observed in the Seljuk Sultanate of Rum and in Central Asia too. Teardrops were used for inscriptions in praise of God; they should be usually read starting from the lower-right hand corner.
This medrese is located immediately below the citadel and it served as an astronomical observatory. 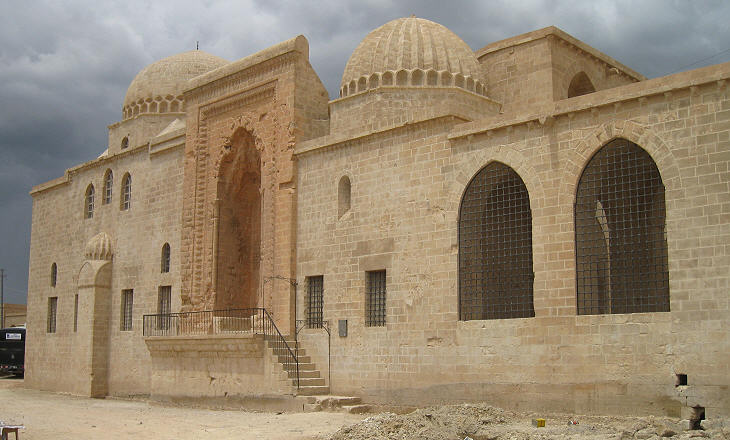 In 1400 Mardin was seized by Timur who after his return to Central Asia, left the town under the control of a federation of Turkish tribes known as Kara Koyunlu (Black Sheep Clan). In the second half of the XVth century the Kara Koyunlu clashed with the Ak Koyunlu (White Sheep Clan) who controlled Diyarbakir and in 1462, they lost Mardin.
The construction of Kasimiye Medresesi took place during the Ak Koyunlu rule; the building is very similar to Sultan Isa Medresesi, but it is located at the foot of the mountain. 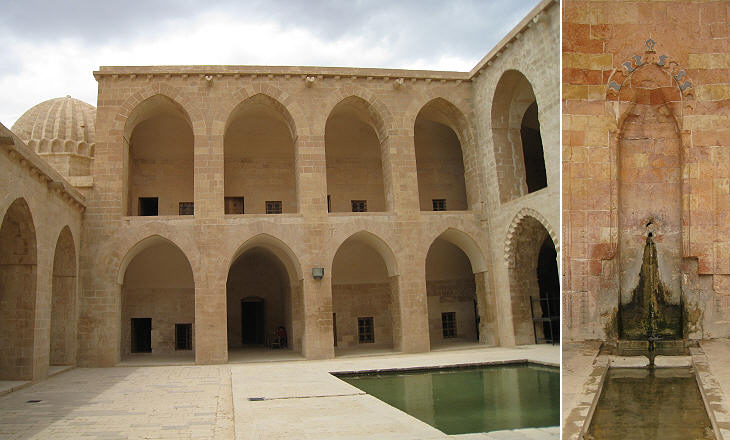 The very high and deep porticoes protected the students' cells from direct sunlight and they favoured air circulation. Notwithstanding its altitude Mardin has very hot summers which influence the design of its buildings. 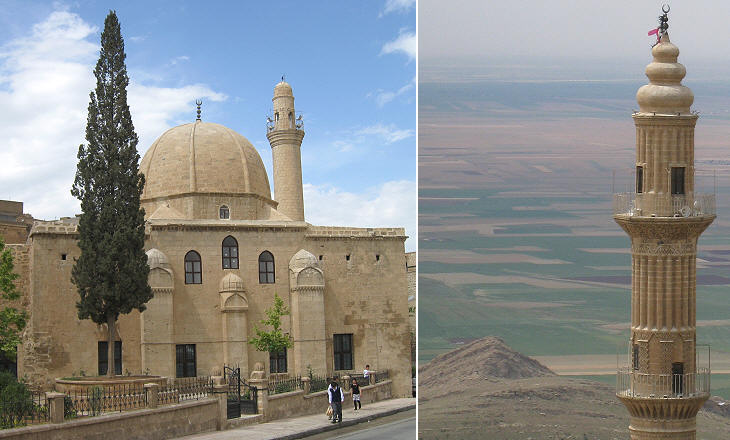 At the beginning of the XVIth century Mardin was conquered by Shah Ismail, the founder of the Safavid dynasty, but after a few years the town was taken by the Ottomans after a long siege which greatly reduced the population and the importance of Mardin.
The Ottomans did not build major monuments but they restored/modified the existing ones.
Melik Mahmut Camii is a mosque of the XIVth century; the three small apses which indicate the direction to Mecca, are similar to those of the Ulu Cami of Silvan which was built by the Artukids.
Sehidiye Camii is another old monument, but its minaret was rebuilt in 1916 in a mixture of styles. Similar to Kilis, the buildings of Mardin are characterized by the use of a limestone which over time acquires a very warm tone; it can be easily worked to obtain all forms of decorations including inscriptions. The image used as background for this page shows a limestone inscription at Ulu Cami. 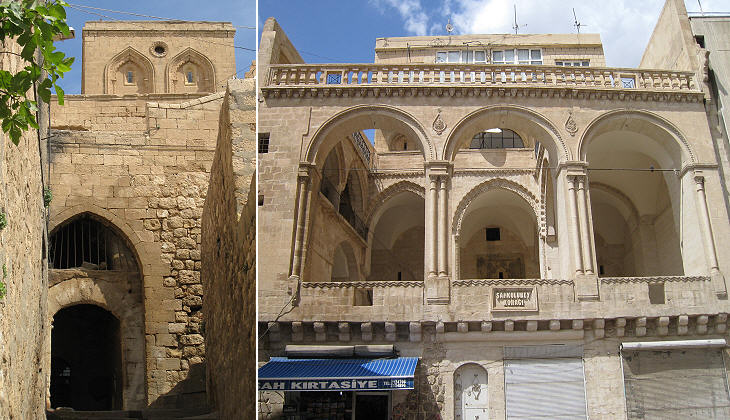 The people live mostly on the hills, and have their shops in the valley; which being built at the foot of the hills, and having flat roofs, one insensibly descends upon them, and on the covered streets which are between them; so that it surprises any one when he imagines that he is walking on the ground, to look down through holes, which give light to the streets, and see people walking below
Richard Pococke - A Description of the East and Some Other Countries - 1745
Pococke described Antep, but it fits the urban layout of Mardin too. The houses of the town are carefully arranged in tiers on the mountain slope so that the roof of each house serves as the terrace of the one above. The streets are connected via a network of passages known as abbara that sometimes pass directly under the houses. The abbara provide shelter from the hot sun in summer and from cold weather and rain in winter. 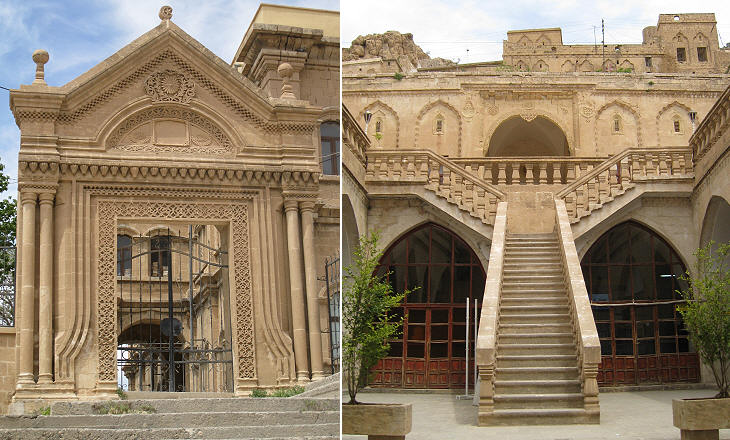 Other examples of limestone buildings

Donkeys and mules are still used to move around the old narrow and steep streets; you can see them in the introductory page.