Seljuk architecture is characterized by pishtaqs, large portals projecting from the facade of a building. In Kayseri they are associated with a medrese, a college for instruction, not always limited to religious matters.

In Islamic art in general the key aspect of a portal is its muqarna, a system of projecting niches above the actual entrance. Seljuk portals featured relatively small muqarnas, while more attention was paid to the decorative bands which frame them. In Sahibiye Medresesi the bands were based on geometric and vegetal designs, but in other pishtaqs also bands of calligraphy were used. While Seljuk portals were decorated with reliefs, those of Persia were mainly decorated with glazed tiles.

Kaiseriyeh, like most other cities in Asia Minor, although encumbered with ruins, presents a picturesque appearance.
William F. Ainsworth - Travels and Researches in Asia Minor, Mesopotamia, Chaldea, and Armenia - 1842
Kulliye is an Ottoman term used to describe a complex of buildings around mosques. Huand Hatun Kulliyesi was commissioned by Mahperi Hatun, a wife of Seljuk Sultan Alaeddin Kaykubad I and it includes a hammam, a medrese and a turbe in addition to the mosque.

The medrese, where once Islamic Law was taught, is now a small shopping centre with a cafè where it is nice to sip a tea. Its thick walls filter the noise of Kayseri's very busy traffic. The arcaded courtyard is dominated by a large pointed-arch iwan, an architectural element typical of Persia where it was developed during the Sassanid Empire prior to the Arab conquest. One of their purposes was to provide a relatively cool place in summer: they usually faced north in order to be always in the shade and the high vault helped the movement of the air.

Cifte Medrese is so named because it consists of two adjacent buildings. The eastern one was a darussifa, a medical school built by Sultan Giyaseddin Kaykhusraw in 1206. The other was founded as a hospital by his sister Gevher Nesibe Sultan, who is buried in a turbe inside the building. The complex is the oldest hospital in Anatolia. The hospital has a finely decorated southern portal. Today the building continues to serve a medical function as it is used by the Kayseri medical school.

The design of Cifte Medrese influenced the construction of Haci Kilic Medrese and Camii, a nearby complex built in 1249, when the Sultanate of Rum was split into three smaller states which were all vassals of the Mongol Empire. The mosque and the adjoining medrese have identical portals (the minaret is a modern addition). Maybe because it was located outside the walls, the complex has the appearance of a fortified site. (left) Haci Mehmet Pacha Camii aka Kursunlu (lead dome) Cami (1574), a detail of which is shown in the image used as background for this page; (right) Rasit Efendi Library (1796)

Towards the end of the XIVth century the Ottomans conquered Kayseri, but after they were defeated in 1402 by Timur the city was assigned to the Karamanids and later on was ruled by local beys. Eventually Sultan Selim I expanded the Ottoman Empire eastwards and Kayseri was annexed to it.
The introduction of Ottoman jurisdiction meant that Christian families were subject to the devsirme tax. They were exempted from joining the army, but one of their children could be taken and trained to become a member of the Janissary corps, which directly served the Sultan. The first implementation of this rule in the region of Kayseri led to the enrolment of a young man aged 23, who was to become the greatest Ottoman architect. He was given the Islamic name of Sinan. After he became the supervisor of all constructions in the Ottoman empire Mimar (Architect) or Mimar Koca (the Great Architect) were added to his name. A mosque of Kayseri is attributed to him (see his masterpiece at Edirne).
A later example of Ottoman architecture in Kayseri is provided by a public library.

(July 1836) The bazaars are extensive, and seemed well supplied. The principal Armenian merchants exhibit their goods in a large place called the Vizir Khan; these are chiefly quincaillerie, snuff-boxes, glass beads, shells from the Red Sea in strings for ornamenting pack-saddles. (..) Of native produce the chief articles are yellow berries and gall-nuts, which are sent to Smyrna; also tragacanth, madder, and a blue dye made from the lees of wine. The small Sultana raisins also grow here and at Karaman in great abundance.
William Hamilton - Researches in Asia Minor, Pontus and Armenia - 1842
Its market is extensive, and is well stocked with the usual articles of demand in these countries, including many of British manufacture. The commercial communication between this place and Smyrna is constantly kept up. Ainsworth
Nevsehirli Ibrahim Pacha was the Sultan's Grand Vizier from 1718 to 1730, a period of unusual peace marked by a process of westernization of the Ottoman society. He was born in Muskara, a small village to the west of Kayseri, which he turned into a town (Nevsehir = new town). He did not forget Kayseri which in 1723 was provided with a new han. 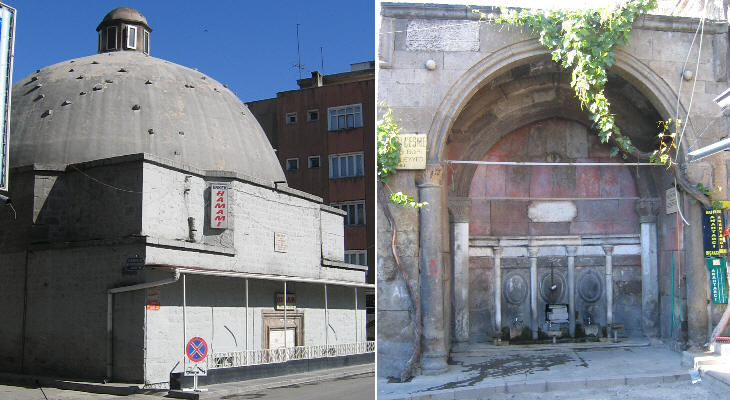 Due to its proximity to Mount Argaeus (which houses a small glacier), Kayseri had a reliable supply of water which allowed the construction of several fountains and large hammams.

We found several tombs with Greek and some with Latin inscriptions, but there are few monuments belonging to the same ages in the city itself. (..) Within the city there are 1100 Greeks, 5200 Armenians, and 12,176 Mohammedans. Ainsworth

Man cannot travel in Asia, as they do in Europe. (..) There are no certain Stages, or Inns to entertain Travellers. The best Inns, especially in Turkie, are the Tents which you carry along with you, and your Hosts are your Servants, that get ready those Victuals which you have bought in good Towns. (..) In the Carvanserai or Inns which are more frequent in Persia than in Turkie, there are persons that furnish you with Provisions, and the first come are best served.
Jean-Baptiste Tavernier - Travels through Turkey to Persia (in the 1630s-1650s)
A large han outside of Kayseri on the road to Sivas was commissioned in 1232 by Sultan Alaeddin Kaykubad I. It is the second largest Seljuk caravanserai in Turkey. As a fortified way station along the trade route, it was built of massive stone walls with only one entrance.

Its fortified aspect is enhanced by towers having different shapes; between them there are drain spouts carved as lions, a symbol the sultan placed at the entrance of the citadel in Kayseri. From the entrance one passes through the thickness of the walls into the courtyard, in the middle of which is a small mosque set on arches above a fountain, with the prayer hall on the second floor, reached by a double stairway. 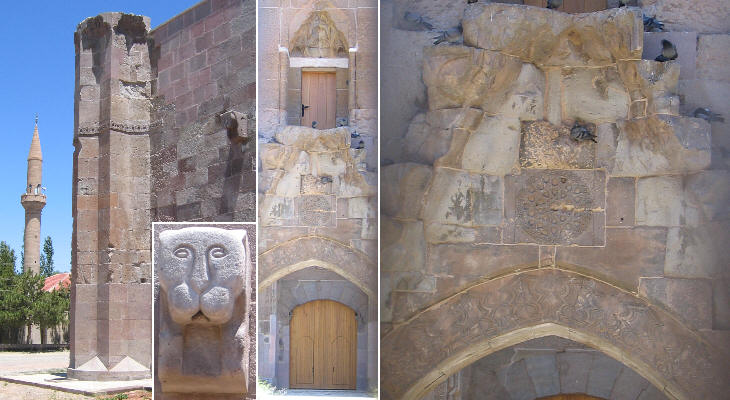 Return to page one or move to:
Introductory page
Konya
Karaman
Mut and Alahan
On the Way to Nigde
Nigde
Cappadocia
Sivas
Divrigi