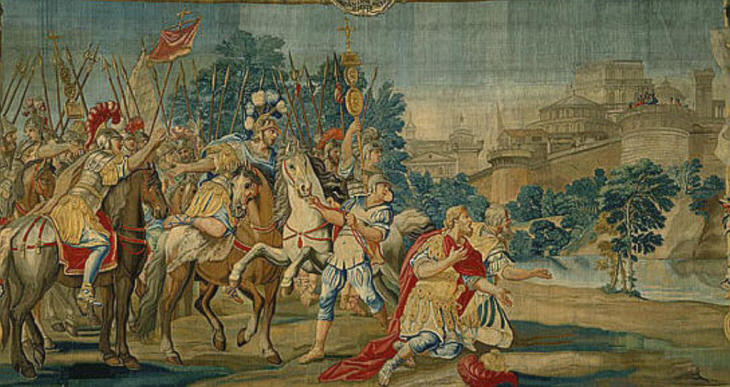 The Crusaders (portrayed as ancient Romans) first see Jerusalem - XVIIIth century backcloth for an opera based on "Jerusalem Delivered" by Torquato Tasso, a poem William Turner was familiar with

Feathered their thoughts, their feet in wings were dight,
Swiftly they marched, yet were not tired thereby,
For willing minds make heaviest burdens light.
But when the gliding sun was mounted high,
Jerusalem, behold, appeared in sight,
Jerusalem they view, they see, they spy,
Jerusalem with merry noise they greet,
With joyful shouts, and acclamations sweet.

I shall only mention the several places that are shewn in the church: (..) 27. The sepulchres of Godfrey and Baldwin kings of Jerusalem.
Richard Pococke - A Description of the East and Some Other Countries - 1745
The Greeks in rebuilding the Sepulchre have displaced the monuments of the French crusaders and it is not known what they have done with them.
William Turner - Journal of a Tour in the Levant - 1820
They showed us where the great Godfrey and his brother Baldwin, the first Christian Kings of Jerusalem, once lay buried by that sacred sepulchre they had fought so long and so valiantly to wrest from the hands of the infidel. But the niches that had contained the ashes of these renowned crusaders were empty. Even the coverings of their tombs were gone - destroyed by devout members of the Greek Church, because Godfrey and Baldwin were Latin princes, and had been reared in a Christian faith whose creed differed in some unimportant respects from theirs.
Mark Twain - The Pilgrims Abroad - 1869 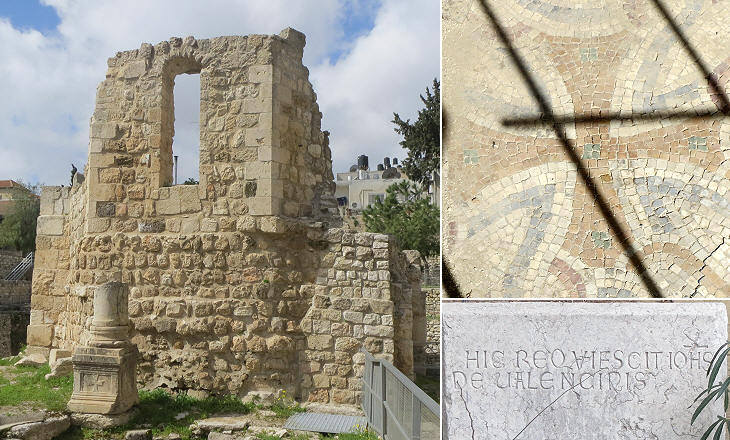 (left) Ruins of a Byzantine church rebuilt by the Crusaders on the site of a Temple to Aesculapius; (right-above) ancient mosaic in a side chapel; (right-below) tombstone of Jean de Valenciennes/Johannes de Valencinis, a French diplomat and the last Christian governor of Kaifah (Haifa) (d. 1265)

The Roman Catholick monks showed me the sword and spurs of Godfrey, but I could not measure them for I had unfortunately lost my rule in the sepulchre where I was writing. It was probably stolen by some of the attendants of the Greek church of whom many were buzzing about me, for even on this holy ground a Greek cannot be honest. Turner
But the relic that touched us most was the plain old sword of that stout Crusader, Godfrey of Bulloigne - King Godfrey of Jerusalem. No blade in Christendom wields such enchantment as this - no blade of all that rust in the ancestral halls of Europe is able to invoke such visions of romance in the brain of him who looks upon it - none that can prate of such chivalric deeds or tell such brave tales of the warrior days of old. Twain
Apart from the sword of Godfrey of Bouillon, William Turner and Mark Twain did not see much other evidence of the century (1099-1187) during which the Crusaders ruled the town.
Ruins of Crusader churches and fragments of their decoration were brought to light in the late XIXth century or more recently when the Jewish Quarter was rebuilt. 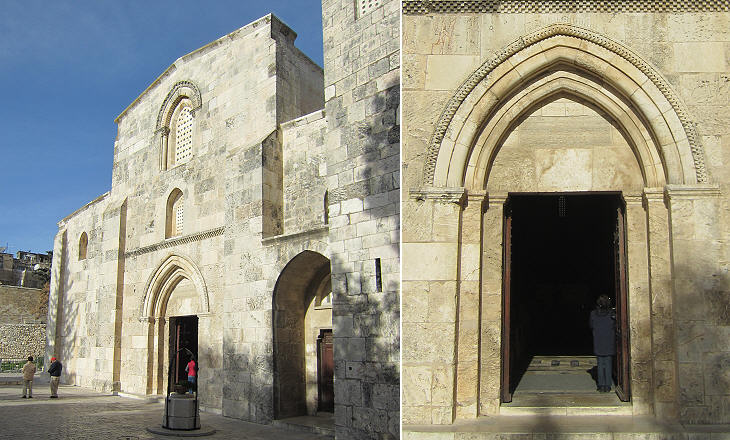 We walked to the spot where St Anna is said to have been delivered of the Virgin which is close to the north east gate of the city still called in Arabick the gate of our Lady Mary. On this place is built a fine large church dedicated to the Virgin and belonging to the Roman Catholick monks but they, from poverty and from want of protection, have been forced to abandon it for the last thirty years and it is now falling to ruins. Turner
In 1856 the Ottomans bequeathed the ruined church (which Saladin had turned into a mosque in 1192) to France to thank her for her support in the Crimean War (according to Twain A war, that cost millions of treasure and rivers of blood, was fought because two rival nations - France and Russia - claimed the sole right to put a new dome upon the Holy Sepulchre).
A small inscription in the portal (which you can see in the image used as background for this page) indicated that the church was dedicated to St. Anne. The French undertook a careful restoration of the church which had been decorated with ancient materials taken from the adjoining Temple to Aesculapius. 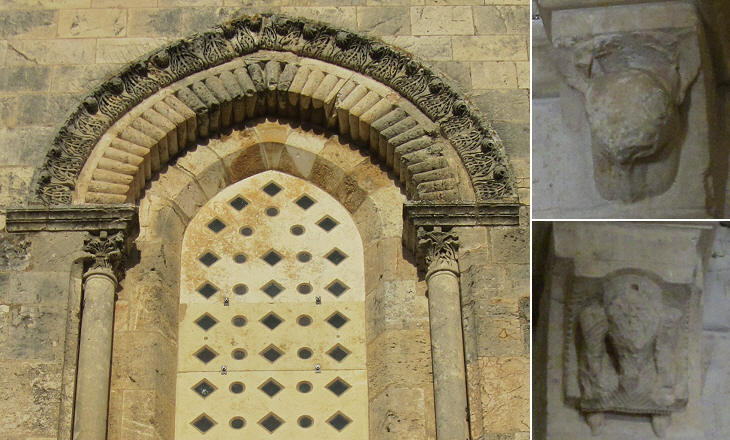 The layout of the church was rather simple and its decoration was limited. The Kingdom of Jerusalem had a difficult life; in addition to the external threats it was torn apart by dynastic quarrels (even between mother and son). Jerusalem was the capital, but some kings chose to reside in other towns. Qubbet el-Miraj, a small building with a Gothic decoration, is one of the few marks the Crusaders left on the site of the ancient Temple and the Hall of the Last Supper was most likely built at the time of the Christian Kingdom of Jerusalem. 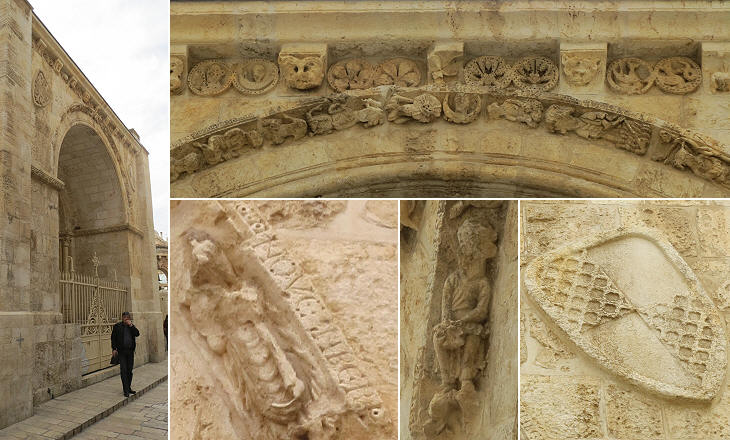 Lutheran Church of the Redeemer

In 1898 Kaiser William II visited Jerusalem to personally attend the consecration of a large Lutheran church near the Holy Sepulchre. The new building incorporates a portal of a Crusader church (St. Maria Latina) which is the finest work of art of that period. The portal was decorated with symbols of the zodiac and of the twelve months of the year in addition to coats of arms. 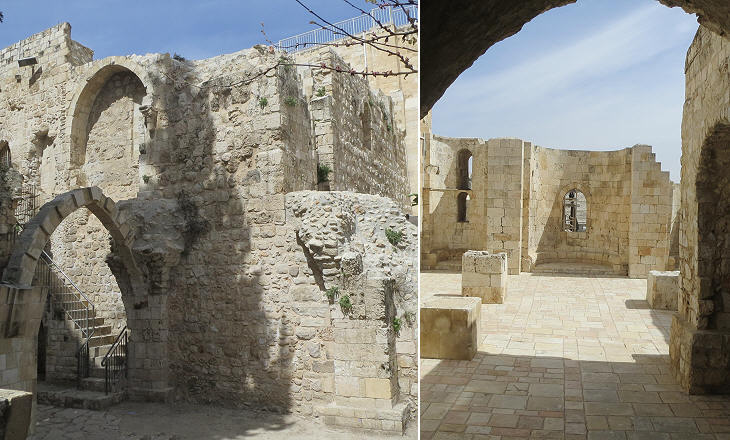 The Teutonic Knights are known for having established a theocratic state on the southern shore of the Baltic Sea. It was originally founded at Jerusalem where it cared for German pilgrims at a hospital which was discovered in recent years in the Jewish Quarter. 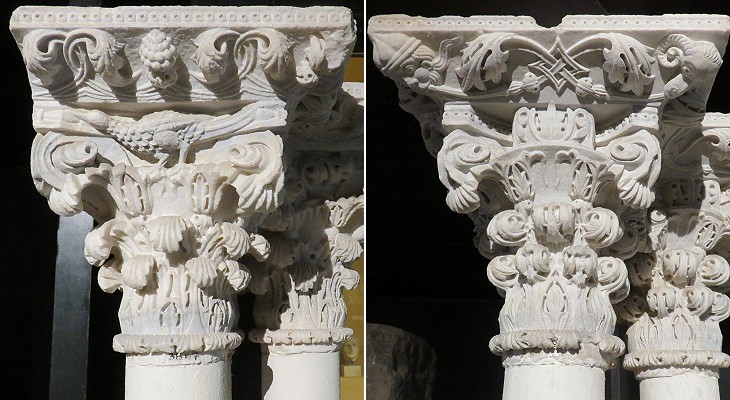 Archaeological Museum of Istanbul: capitals of a building of the Templar Order found at Latrun, in the outskirts of Jerusalem

Pauperes Commilitones Christi Templique Salomonici (The Poor Fellow-Soldiers of Christ and of the Temple of Solomon) was the Latin name of the Templar Order which had its headquarters on the site of the ancient Temple. You may wish to see a section on the Castles built by the Crusaders. 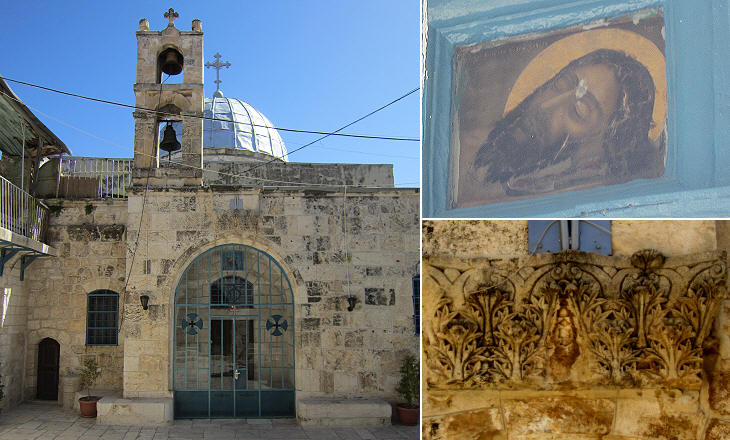 Church of St. John the Baptist and details above the entrance 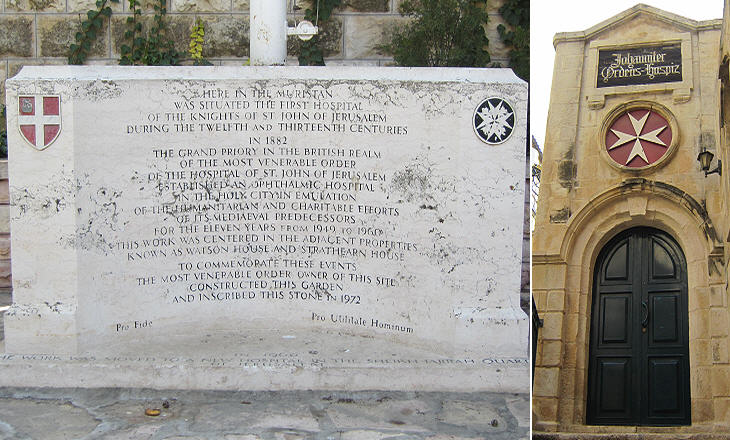 (left) 1882 inscription celebrating the construction of an ophthalmic hospital by the Venerable Order of the Hospital of Saint John of Jerusalem, a British Protestant branch of the Order; (right) entrance to St. John's Hospital founded in 1866 by the German Lutheran Order of St. John