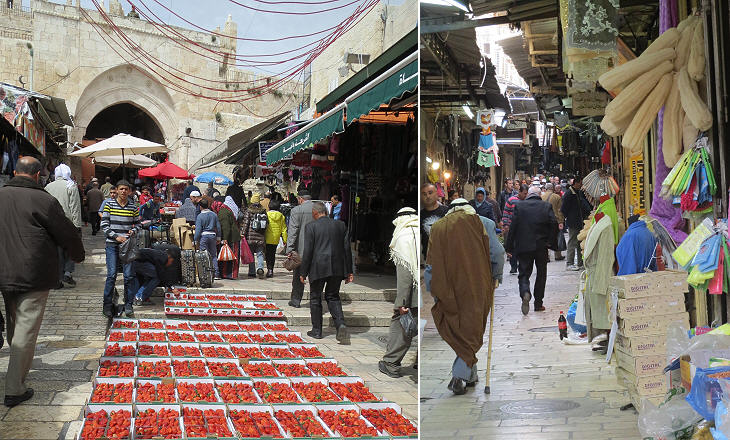 Muslim Quarter: (left) strawberry seller at Damascus Gate; (right) shops in the main north-south street which follows the path of a Roman cardo

Lepers, cripples, the blind, and the idiotic, assail you on every hand, and they know but one word of but one language apparently - the eternal "bucksheesh". To see the numbers of maimed, malformed and diseased humanity that throng the holy places and obstruct the gates, one might suppose that the ancient days had come again, and that the angel of the Lord was expected to descend at any moment to stir the waters of Bethesda.
Mark Twain - The Pilgrims Abroad - 1869
If Twain visited Jerusalem today he would be glad to see that there are no beggars and that its inhabitants are not in particularly poor health. 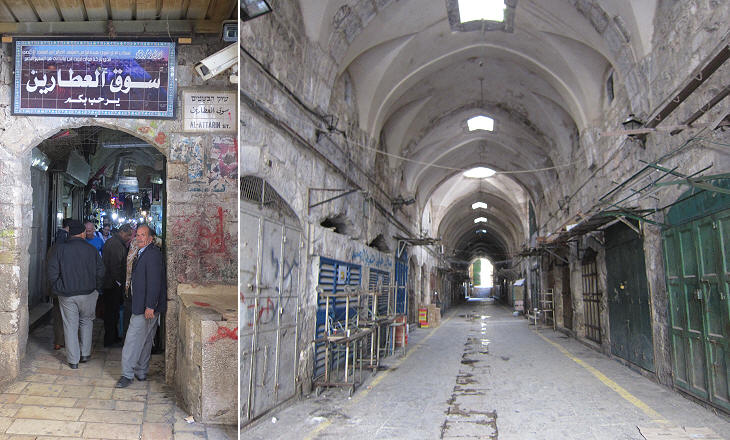 There are three small streets of Bezesteins arched, but narrow, dark and dirty. In these stuffs are sold and there are many silversmiths who work coffee cups and chalices for the convents. The bazaars are mean and ill provided. We met a Turk walking through the bazaars this evening entirely naked. On inquiry I was told he is or pretends to be mad and in consequence is esteemed by the Turks as a saint.
William Turner - Journal of a Tour in the Levant - 1820.
Almost half of the Old City is a marketplace. The shops of Via Dolorosa in the Muslim Quarter cater for Christian pilgrims, but the other shops of the quarter are not tourist oriented. Their customers come from the eastern and northern suburbs of Jerusalem, where most of the Arab population lives. 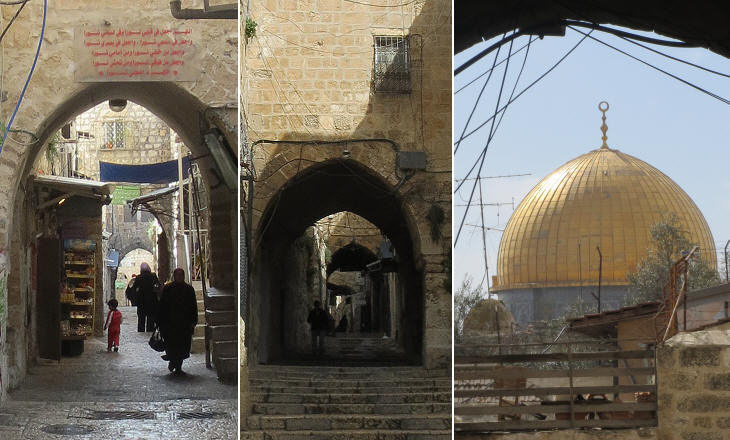 (left/centre) Streets of Bethesda, a quarter in the north-eastern corner of the Old City; (right) view of the Dome of the Rock from Bethesda

The streets are roughly and badly paved with stone, and are tolerably crooked - enough so to make each street appear to close together constantly and come to an end about a hundred yards ahead of a pilgrim as long as he chooses to walk in it. Twain
Bethesda is almost the only remaining residential quarter inside the Old City and it has retained the appearance it had when Twain visited Jerusalem. The quarter is quoted in John 5:2: Now there is at Jerusalem by the sheep market a pool, which is called in the Hebrew tongue Bethesda, having five porches. The pool was a large ancient cistern. 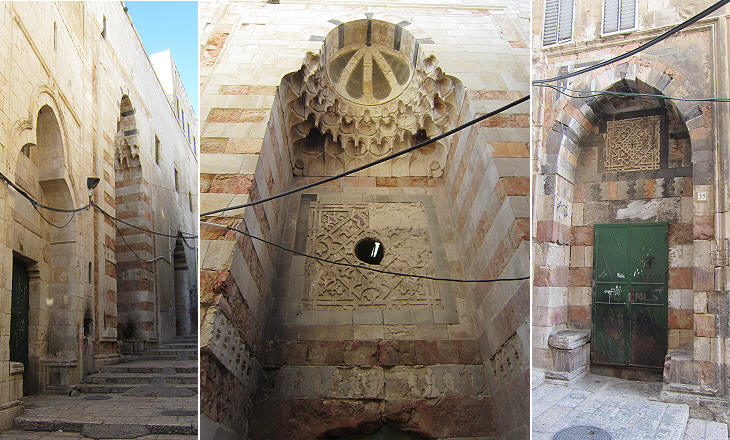 Without the convents Jerusalem would be nearly a desert. There are a few good houses built of the large materials of the ruins and mostly possessed by the Turks; but the generality, though all stone, bear a wretched appearance. Turner
Turner, who had not visited Damascus, Aleppo or Cairo before Jerusalem was not familiar with Mameluke architecture (Twain could not care less about it). The fine design and decoration of the high portals of most buildings were not noticed because of the narrowness of the streets. 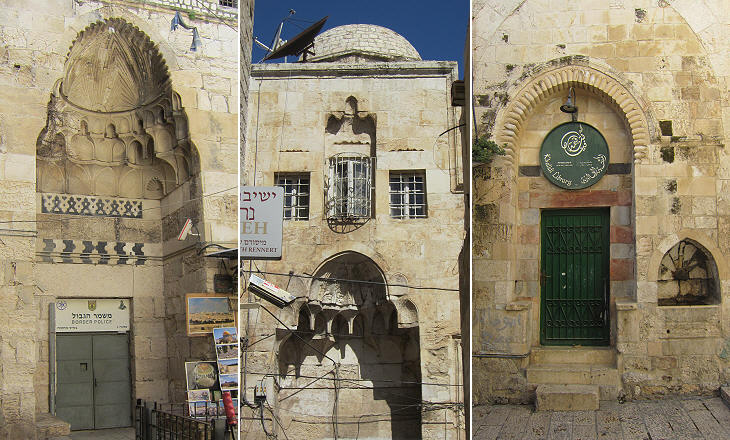 The construction of pishtaq, monumental portals, is typical of Persian Islamic art, but it can be observed also in the Seljuk Sultanate of Rum and in Central Asia in addition to the Mameluke territories.
The main buildings of Mameluke Jerusalem were built along Silsileh Street at the southern end of the Muslim Quarter where it borders on the Jewish one. The street was named after a gate leading to Qubbet el-Silsileh (Dome of the Chain). The image used as background for this page shows a typical Mameluke decorative pattern. Ottoman Sultan Suleyman I improved the water supply system of Jerusalem and he built a net of fountains. They are called sabil (or sebil), a word which the Turks used for kiosks where passers-by were offered glasses of water, whereas public fountains were called cesme (you may wish to see a sebil and a cesme at Constantinople). The finest fountains were built near the gates of Haram esh-Sheriff, the complex of Muslim religious buildings on the terrace of the Temple. Today these fountains are located at a critical checkpoint between the Muslim Quarter and the Wailing Wall. 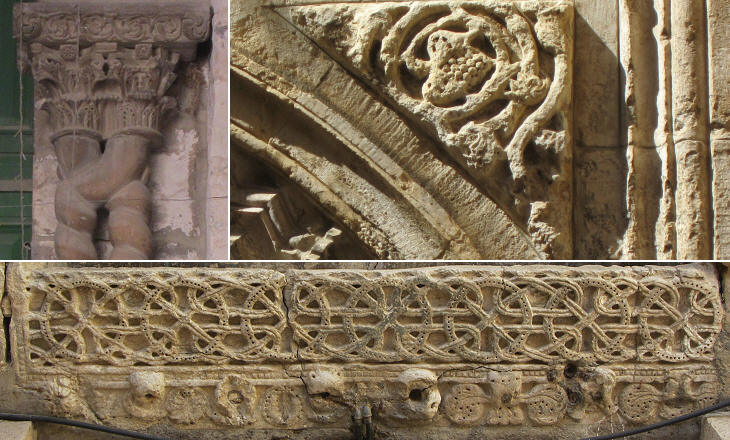 Some decorative elements of the fountains were taken from Roman or Byzantine buildings, a practice which was very common among the Ottomans who did not refrain from reusing ancient sarcophagi which depicted human beings, e.g. at Niksar. Christian Quarter: (left) S. Salvatore, the church of the Franciscan convent seen from the Citadel; (insets) Church of the Italian Hospital, now Israel Ministry of Education Building, by Antonio Barluzzi (1919) (you may wish to see other churches by Barluzzi in Galilee and on the Mount of Olives); (right) coat of arms of the Franciscan Order in the Holy Land celebrating the 1833 renovation of the convent

As I have mentioned the Latin convent, I shall give an account how European pilgrims are received in it. When they first arrive at the gate of Jerusalem, they send to the Latin convent, and the interpreter of the monks comes and conducts them to the monastery, where there is a building appropriated to European pilgrims, and it is the office of one of the lay-brothers to take care of them, they may also hire a servant in order to have the better attendance; the lay-brother takes care that they are served with whatever they want, and goes always out with them. If there happen to be two or three, and there are seldom more, they commonly make their visits together: when I was there at Easter there was only a lay-Jesuit from Aleppo, a Hamburgher arrived afterwards, and then a Ragusean (from today's Dubrovnik), captain of a ship. Those of condition always make a present on their departure to the value of about six pounds. But there is generally a great number of the eastern catholics to be maintained there gratis; such as the Maronites, and those Coptis, Greeks and Armenians, who acknowledge the pope; for these they prepare a house, and send them provisions from time to time. The European pilgrims dine and sup in the refectory with the monks, where some of them read all the time in books of devotion; they are well served with three or four plates, and have excellent white-wine of their own making.
Richard Pococke - A Description of the East and Some Other Countries - 1745
I dined and supped with Padre Clemente Perez the "procuratore curatore" of the convent who has two very good apartments. He tells me that the convent contains now thirty three monks and formerly had above sixty and that it gives bread weekly to above 800 Christians and to some Turks. That the convent also gives linen for making shirts and cloth for dresses. The petitioners have some two loaves a week, some one, some half a one, according to their necessities and merits. This has been always continued in spite of the poverty of the convent so that it is now considerably indebted. Turner
The Ottoman Empire dealt with the plurality of religions of its population by recognizing four millets (confessional communities) for its Muslim, Greek Orthodox, Armenian and Jewish subjects. Family law was administered by religious courts; the appointment of millet leaders was endorsed by the Sultan. The four communities lived in separate quarters. In some Greek towns Muslim and Jews lived within the walls and the Greek Orthodox outside them (e.g. at Rhodes). At Jerusalem each of the four millet had its own quarter. Roman Catholics were not allowed to have a millet and a quarter of their own, but the King of France was recognized by the Sultan as their Protector. The Franciscans were acknowledged a special authority in the Holy Land and part of the Christian Quarter in Jerusalem belonged to them. 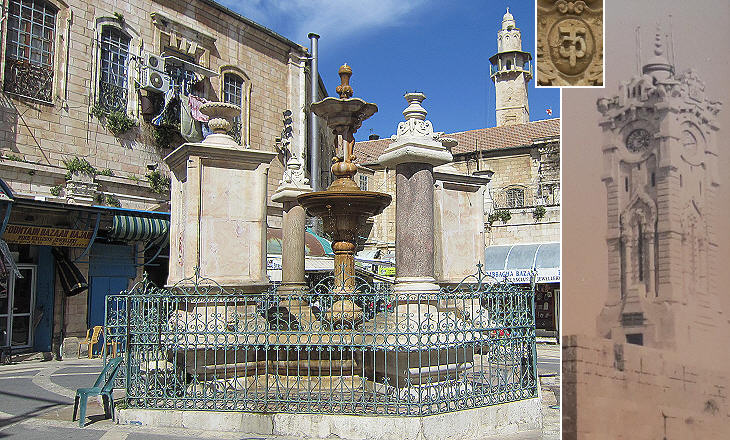 Christian Quarter: (left) Fountain of Muristan; (right) clock tower at Jaffa Gate which was built by Ottoman Sultan Abdul Hamid II in 1908. It was pulled down by British authorities in 1922; (inset) symbol of the Greek Orthodox Patriarchate in Jerusalem on an arch in Muristan (letters tau and phi making up Taphos, Greek for the Tomb - the Holy Sepulchre)

The Christian Quarter was largely renovated in the late XIXth century when many new churches and hospitals were built. In 1869 a large area, which included a hospital (Muristan) which was going to rack and ruin, was donated by Ottoman authorities to the King of Prussia and to the Greek Orthodox Patriarchate. The name continues to indicate the area after it has been turned into a modern shopping district surrounding the only public square and European-style fountain of Jerusalem. Jewish Quarter: (left) Hurva Synagogue; (center) poster showing an altar from an Italian synagogue at Ancona which has been relocated into the Istanbuli Sephardic Synagogue; (right) mosaic decoration of a modern shop

Mount Sion was separated from mount Moriah by the valley of Millo. (..) The bazars or shops are at present in this valley, and the quarter of the Jews with their seven synagogues. Pococke
During the 1948 War the Jews who lived in the Old City had to abandon their homes. The Jordanian troops pillaged and burnt the synagogues as well as many other buildings of the Jewish Quarter. Hurva was the most imposing synagogue; it was built in the XIXth century at a time when the Ottomans allowed the construction of synagogues and churches of large size. It was rebuilt in 2010 and its almost Ottoman dome has become a landmark of the Old City.
Some small synagogues which were pillaged in 1948 have been refurbished with altars and cupboards coming from closed synagogues of the Jewish Diaspora. 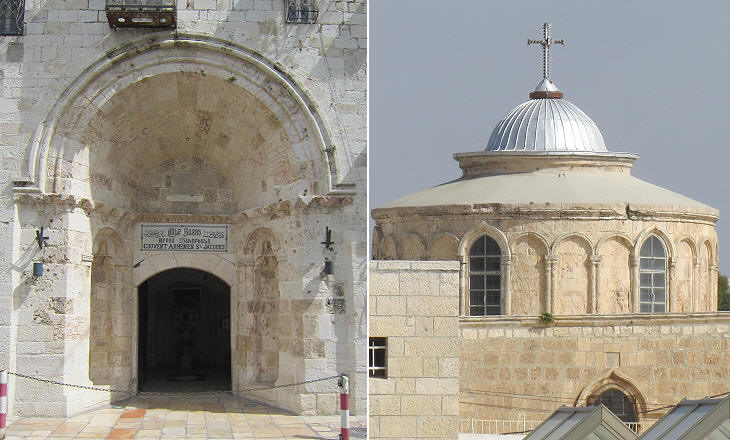 Armenian Quarter; (left) portal of the monastery; (right) dome of the church

The Armenians have a very large and delightful space of ground: their Convent, and Gardens taking up all that part of Mount Sion, which is within the Walls of the City. (..) Leaving this Convent, we went a little farther to another small Church which was like wise in the hands of the Armenians.
Henry Maundrell - A Journey from Aleppo to Jerusalem at Easter - 1697
We walked to the Armenian convent, the largest in Jerusalem. It is said to contain 350 chambers which in the time of the Frank kings of the Holy Land I was told was an hospital. We found many pilgrims lounging about the door for all who can pay lodge in the convents and on the outside was a crowded bazaar of beads, crucifixes, etc. In this church which is built on part of Mount Sion is said to be the spot where St. James (the Greater) was beheaded. Turner
The Armenian Quarter, the smallest one, is situated in the south-western corner of the Old City in a rather secluded area with no large streets crossing it.