In the late Ist century AD the Romans founded a town on the right bank of the Nile on the site of the ancient port of On (Heliopolis) which was called by the Egyptians "Per-hapi-en-On". The Romans transformed the Egyptian toponym into a more fascinating word: Babilonia. 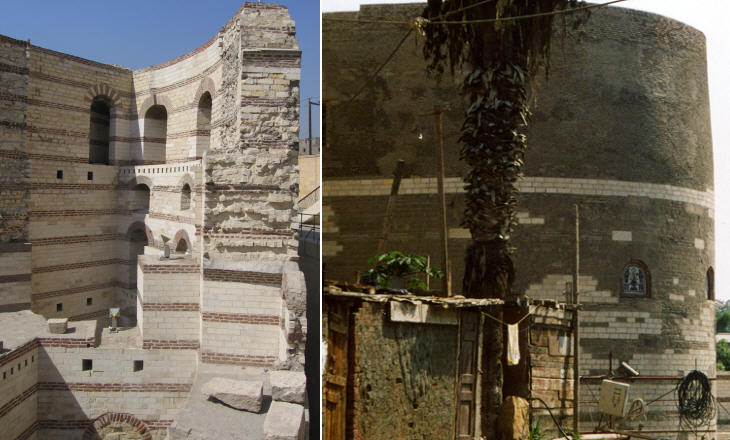 Round towers of the ancient walls of Babilonia

The emperors Trajan and Hadrian strengthened the town with walls and towers. At that time Egypt was only slightly in danger of being invaded by the Parthians, the only remaining enemy the Romans had in that part of the world, so it is more likely that the fortifications were built to deter the raids of bandits, as Babilonia was key to the trade of a very precious commodity: the Nubian slaves. They have also Several canes (khans) in Cairo, (..) they are very indifferent buildings round a court, are commonly appropriated to merchants of a particular country, with their merchandise; as there is one for those of Nubia, and the black slaves and other goods they bring along with them.
Richard Pococke - A Description of the East and Some Other Countries - 1743
This trade was still flourishing in the XIXth century and the image used as a background of this page is a detail of an 1838 lithograph by David Roberts showing the slave market in Cairo. 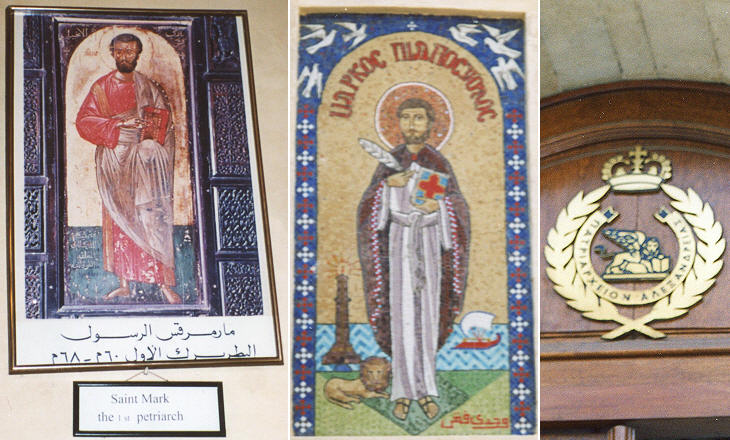 St. Mark and his symbol

The Coptis bear an implacable hatred towards the Greeks, ever since the famous affair of pressing them to receive the council of Chalcedon; and when the Greeks got the upper hand, it is said they treated them with great rigour. Pococke
In 642 Amr ibn el-As, general of the Arab army of Omar, the second Caliph, invaded Egypt and easily defeated the Byzantine armies. Egypt had just been reoccupied by the Byzantines in 628 after a short Persian domination, and the Egyptians saw the Byzantines as Greek invaders, who in addition threatened their Christian (Coptic) faith which they considered heretical.
Amr ibn el-As won the hearts and minds of the inhabitants of Babilonia by granting them religious freedom. He founded in the vicinity a new town, Fustat and its mosque is the oldest one in Egypt, but Babilonia remained a haven for the Christians. Now it is part of Cairo and it is usually called Old Cairo or Kasr-el-Chamah.
The prevailing Christian faith in Egypt is called Coptic, which just means Egyptian, because the Greeks pronounced the g of Egypt as the g of gun, rather than the g of gin. St. Mark was for Alexandria what St. Peter was for Rome as he preached the Gospel in Egypt and he founded the church (patriarchy) of Alexandria. The symbol of the Patriarchy of Alexandria is the same as that of Venice, a winged lion holding a book (the Venetians stole the body of the saint from Alexandria), but in other Egyptian images the lion is without wings.

A sign of the Coptic presence in Egypt is the use of their calendar. The Gregorian date is accompanied by the Muslim date, counting the years since the Egira (year 622, but the Muslim year is based on a lunar calendar and is shorter than the solar year) and by the Coptic date.
The Coptic calendar is the solar calendar adopted by Julius Caesar. It became the official calendar of the Roman Empire. It is based on 365 days and an additional leap day every four years, but it is divided into 13 months, 12 of 30 days and one of 5 or 6 days. The months retain in some cases their ancient Egyptian names, so the month of Tout is a reference to Thot, the god of wisdom, writing and knowledge and the name of the first month of the Egyptian calendar. The Coptic calendar counts the years since the accession to the throne of Emperor Diocletian and the year is followed by A.M. (Anno Martyrum) rather than A.D. (Anno Domini), as it makes reference to the persecutions ordered by that emperor in 303-304 and which particularly hit the Christians in Egypt. The accession is set at the year 283 AD, while today's historians believe the accession occurred in the year 284. 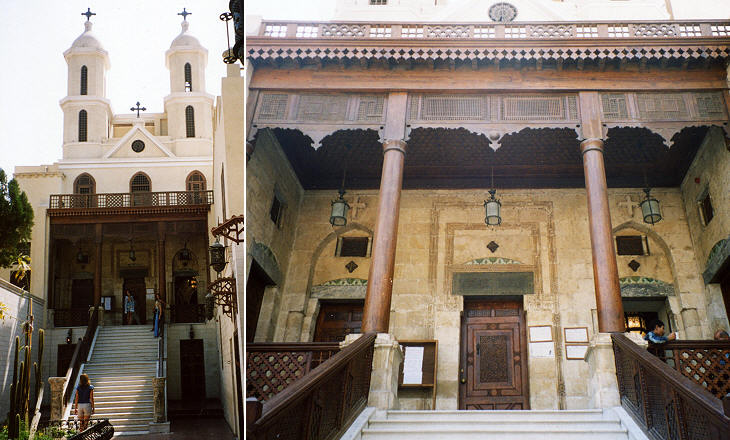 There are about twelve churches belonging to the Coptis in old Cairo, mostly in one quarter of the town, inhabited by Christians: They have churches also in Cairo; one of which belongs to the Patriarch; but his proper church seems to be St. Macarius's in old Cairo, where he is elected and enthroned; this is in the street of the Patriarch. In the church of St. Barbara, they say they have her head, and some other relicks. Most of the churches have old ones under them; and they say the Holy Family was in the lower church dedicated to St. Sergius, where there are some paintings relating to that subject. These churches generally consist of a nave, and two isles, with galleries over the isles supported by pillars, and adorn'd with columns in the front that support the roof. The part of the altar is separated by a partition that is often finely adorn'd with carving, and inlaid with ivory and tortoise shell. Pococke
Both Jews and Christians regard Babilonia as the site of important events. For the Jews the still existing synagogue of Ben Ezra was built where the Pharaoh's daughter found Moses and for the Christians the church of St. Serge was built on a cave where the Sacred Family found a refuge. There are several churches inside the walls of Babilonia. One of them, St. George's, gives the name to the Cairo underground station (Bar Girgi) next to it. The most famous church is called the Suspended Church (Al Moallaqah), because it was built on top of the ancient Roman gate. It is dedicated to the Virgin Mary and it has been for a long time the church of the Coptic Patriarchs. 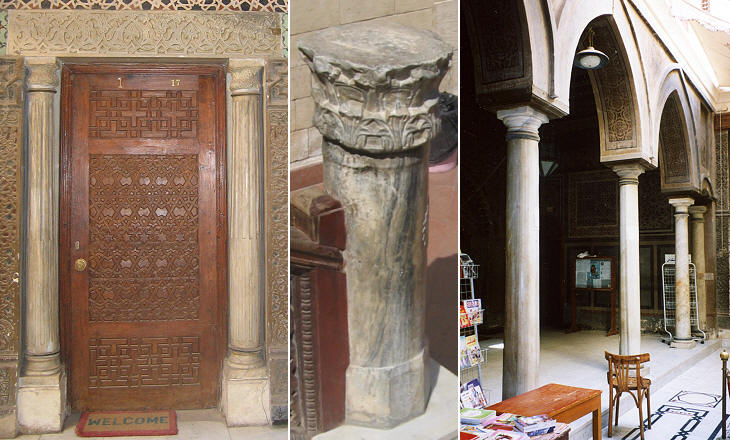 The Christian religion would be at a very low ebb, if the (rich) people did not find it convenient to have Copti stewards of their estates, who are well acquainted with all affairs, are very dextrous at keeping accounts, which they do in a sort of Coptic characters understood by no body else; and one reason why they make use of them may be, that these people are more under their command, and they may have them more in their power, in case of any breach of trust. These stewards, in every village, are a sort of lords, and are protectors of the Christians in it. Pococke
A visit to the church shows that it was built making use of elements of the Roman temples of Babilonia. In particular a pillar of cipollino can be linked to Emperor Hadrian who erected many buildings throughout the Empire making use of this kind of coloured marble, e.g. at Athens. 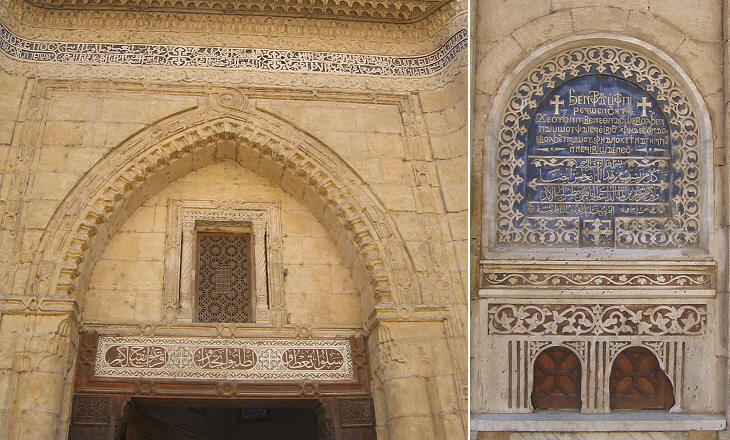 Decorations of and near the entrance to the Suspended Church

The priests perform the service in the Coptic language, of which they generally understand very little; but they have books of their liturgy, with the Arabic interpretation. Pococke
The decoration of the Coptic churches shows the influence of Islamic art and in particular the use of calligraphy as a decorative element. Only a few crosses alert the viewer who cannot read Arabic that those inscriptions are not in praise of Allah. 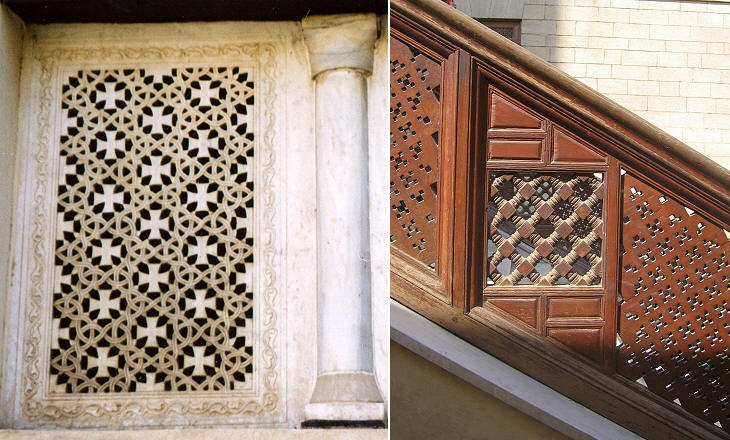 A window in St. Barbara's and a detail of the staircase of the Suspended Church